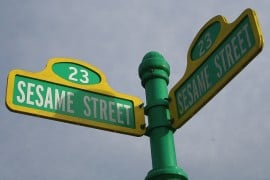 Since Sesame Street premiered in 1969 it has captivated audiences young and old with fun, colorful, humorous and relevant educational content. Forty three years on and the show has not only transitioned into the world of the web and social media, it has positively excelled.

With over 573 million views on YouTube, 374 thousand Facebook fans and 604 thousand Twitter followers, Sesame Street is a social media force to be reckoned with. But what is it that has promoted such a following? And what is Sesame Workshop doing so right? Take a look at the latest Sesame Street viral video from YouTube favorites OK Go and some of the other huge viral successes from children’s show to see why they are topping the social charts.

OK Go are a US Indie Rock band from Chicago who are renowned for their massive viral videos (Here It Goes Again, This Too Shall Pass) on YouTube. The band worked with Sesame Street to produce what is a simple, but very effective music video for teaching children the primary colors. Only released on Monday, expect to see this one take on a viral following fast.

Sesame Street: Will.i.am’s Song “What I Am”

Sesame Street is renowned for attracting some of the biggest names in show business. From Mel Gibson to Ray Charles, the show is a mark for any celebrity that they have really made it. In this hugely popular video, Will.iam of the Black Eyed Peas teaches children about believing in themselves… Beware, you may have this tune stuck in your head all day.

The popular children’s show is also very in tune with what is trending in the social media world. An amazingly successful example of this, is Grover taking off the viral “Old Spice” campaign while teaching children about the word “on”. If somehow you managed to miss the original, make sure you watch it before viewing the Sesame Street version.

As a television show, video is at the heart of everything Sesame Street does online, and YouTube is the perfect channel for growing this audience beyond the TV. But there are many other important reasons the show is now a social media super power:

Sesame Street is a brilliant example of taking past assets, knowledge and passion and bringing it to a new age. There are a number of lessons any educational institution can learn from how the show has transitioned online, and at the very least, it is always just fun to watch puppets dancing.

What is you favorite video from Sesame Street? Share your links in the comments and we’ll put them up on our Facebook and Google+ feeds.