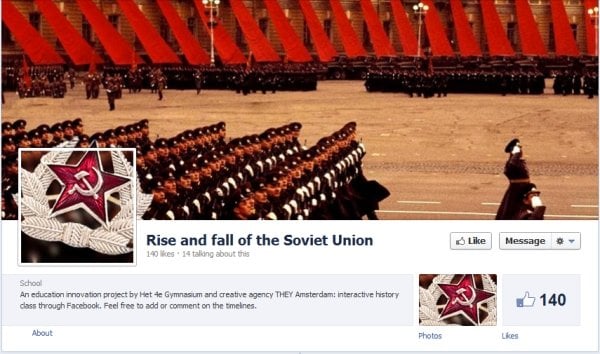 Ever wondered what would have happened if famous people in history had had social media at their fingertips? Imagine George Washington Tweeting while he crossed the Delaware River or Napoleon setting his job description to “Emperor”.

Taking a look at the Stanford project called “Republic of Letters” that has digitally tracked the correspondence of Voltaire, Newton, Rousseau in order to see their “social graph”, the idea of social networks and how ideas and news spread has basically stayed the same. Just the speed of information has increased dramatically.

Today I would like to give you some ideas on how to use Facebook and Twitter in the history classroom. Both social networks offer great opportunities to open a window into history and get students more engaged and involved in using social media for learning.

Yesterday, I came across a really interesting project from the Netherlands. A class of the 4e Gymnasium in Amsterdam has set up different Facebook pages to create an interactive curriculum based on Magellan’s voyage, the rise and fall of the Soviet Union and more. Thanks to the Timeline feature, Facebook pages are a great framework for such history projects.

They can also be a great resource for finding information on tools for the classroom.  I’ve found help getting the best screencasting software and the best document camera for classroom usage, for example.

Similar to the timeline for the individual where a Facebook user can add content starting at his/her birth, timeline for pages lets brands (or in this case classes) create timelines with major events back in the past. This can be done on a broader scale based on the year but you could also get very granular, adding events on a specific date, time and place.

It is also easy to add media like photos, videos or links to Wikipedia and other sources to the timeline. And as the timeline is on Facebook students can easily comment, like and share the different events which adds another layer of interactivity.

Another great aspect of creating historical timelines is that most of the content students can add to the page is public domain, so no worries about getting in trouble with copyright issues. Student groups could work on specific parts of the timeline, filling in the blanks and have a friendly competition, for instance which group adds the most relevant and best researched information.

Now, while Facebook is more of the archeological approach to history, you gather information and put it into order, Twitter can be used to somewhat simulate time travel.

There is a growing number of Twitter accounts that share historic events in “real time”. For example the Civil War Twitter account by the Washington Post is Tweeting the entire Civil War based on letters, newspaper quotes and other sources from that time. The latest big event was, of course, the battle of Antietam.

Many websites offer a so called “This day in history” service, but I think Twitter is a great platform to get short but relevant snippets from the past as they happened. Due to the limitation to 140 characters, it really feels like old telegraphed messages which in the case of the Civil War Twitter account is most often the case.

Those snippets can then be used to start a discussion or they can be an entry point for further research as well. If you search a bit on Google or Twitter you will find a lot of related accounts and of course other historic events like World War II.

If you want to get really geeky, you could also combine the two services. In order to do that, you need to have your posts ready for each day and add them to the Facebook timeline. As you can hook up Twitter with your Facebook page the post would then automatically appear in your Twitter stream as well.

How have you seen social media used in the classroom? And what ideas can you share to help others get started.