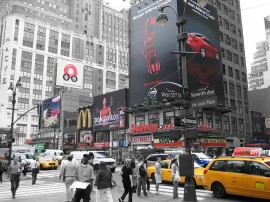 About two years ago I decided my grainy, low-res family photos needed a technology injection. Hearing friends boast of an ever growing number of mega-pixels I eagerly decided that it was time to invest in a new digital camera. Following my usual thorough process of assessing features versus cost, I parted with a couple of hundred dollars and was soon the owner of a slick new Lumix ‘point and shoot’ (a great camera I must say).

Since making what was a very well educated and (over) researched purchase, I have used that camera a total 3 times. What a waste of money! Why is this you ask? Well, since buying the standalone camera, I inadvertently became the owner of another photographic device. One that is always with me, one that has unlimited free software and one that allows me to seamlessly integrate my family pics into my social networks. Yes, the iPhone 4 has essentially turned my Lumix into an overpriced memory card case.

With mobile device prices continually dropping and camera and lens quality improving every day, the phone is quickly becoming the ‘point and shoot’ of choice. Particularly for the younger generation that have always had them, cameras are just broken iPhones with no cool apps. With this in mind, here are five of the best apps you and your class can use to tweak, alter, filter, render, hipster and awesomize digital pics.

One of my absolute favorite apps for tweaking photos, 360 Panorama lets you turn any scene into an interactive panorama. Available on iOS and Android, the app is about as easy to use as it gets. The instructions are basically, start the app and spin in a circle. As well as creating fully pannable images, the app also creates amazing stereographic images where the 360 degrees are warped into a single view. This results in an really cool abstract image resembling a “planet” style view of your scene.

I remember discovering the feature on my old Canon camera to isolate different colors. For about a year every album I posted was black and white with reds and greens glaring out. Dash Of Color FREE as you may have guessed, is a free app for both iOS and Android. The app takes color isolation to the next level, letting you paint on colors with touch, giving much greater creative control. Great for creating artistic and professional looking pictures, just be sure not to make the mistake of overdoing it.

One of the most popular iPhone camera apps, Camera Awesome is a one stop shop for photo enhancing. Free, with the option to purchase additional filters, the app lets you apply effects and customizations to achieve slick and professional looking photos. The app also supports sharing on nearly every social network including Facebook, Twitter, Flickr and more. If you are an Android user, try checking out PicsArt – Photo Studio.

Simple, but very effective, Magic Eye Color Effect Free gives pictures of friends and family an amazing new look. Using facial recognition to locate the eyes, the app lets you re-color the iris using a number of pre-made templates. Whether choosing a simple new color, or going for something more extreme (try the rainbow effect), it is amazing how impressive the app results are. If you are an Android user, try checking out Eye Color Booth.

Photo Grid is a free Android app that takes your photos and turns them into funky collages. Letting you play with layout and borders it is a piece of cake to create arty looking templates and collections. Like most other photo apps, Photo Grid also supports sharing on all popular social networks. If you are an iOS user, try checking out Pic Stitch.

It would be unfair to complete this list without a mention for Instagram, the most popular photo app on iOS (soon to be on Android too). Instagram has built a passionate and strong community around its app that lets users apply cool retro filters to their photos. As one of the pioneers, Instagram and following apps have completely changed the way anyone anticipated we would use cameras. Powerful rendering technology, social networks and hardware advances have meant that for most people a phone is as good a camera as they will ever need. And for me, this means my “as new” Lumix will probably stay in the drawer for a good while longer.

What photo apps do you recommend? And how has the camera phone changed the way you take pics?