I’ve got a little something to confess. I’m one of those parents who read stories aloud and does ALL the voices. From high pitched squirrels to bellowing giants my range is really something to behold… Well at least to my children’s ears it is. But you don’t have to be a vocal gymnast to turn stories into audio adventures. Whether it’s for a family car trip or to help your kids drift off at night, audiobooks are an amazingly fun and very affordable alternative to printed and digital books.

All of the books in this list are available for free as part of an Audible trial and with apps for just about every device, these wonderful books are more accessible and engaging than ever! So, let’s kick this off with our twenty-seven best audiobooks for kids!

1. The Cat in the Hat and Other Dr. Seuss Favorites

One of the best examples of how amazing and powerful audiobooks can be, The Cat in the Hat features the all-star voices of John Cleese, Billy Crystal, Ted Danson, Kelsey Grammer, Dustin Hoffman, John Lithgow, and more.

2. The Magic School Bus Inside the Human Body 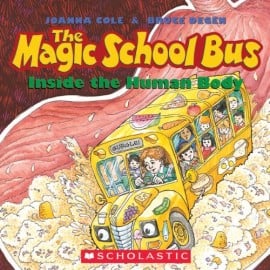 The Magic School Bus is an educational classic, blending learning with a fun and exciting story. Join Ms. Frizzle and her class as they study how the body turns food into energy and take an adventure inside the human body.

3. Legend of EnderZilla: A Minecraft Novel 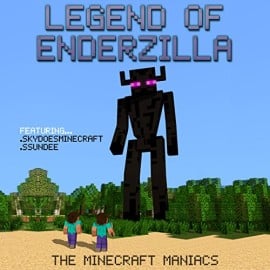 An audiobook for kids who are Minecraft mad, the Legend of EnderZilla is one of the best in the growing series of Minecraft novels. Listen in on the adventure as Sky and SSundee try to escape the deadly island and defeat the giant EnderZilla. 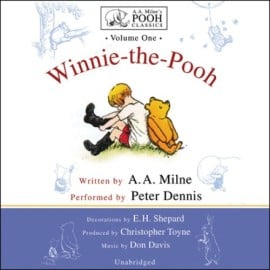 The classic tales of Winnie-the-Pooh are just as meaningful now as they were when first released in 1926. Your kids will love all the stories of Christopher Robin and his companions having wonderful times getting in and out of trouble.

5. The Wonderful Wizard of Oz 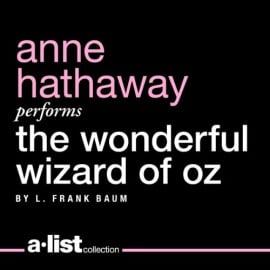 One of the best-known stories in American culture, The Wonderful Wizard of Oz has stirred the imagination of young and old alike for over 100 years. Academy Award-winning actress Anne Hathaway lends her voice to this uniquely American fairy tale.

Ready by another Academy Award winner, Matilda is beautifully narrated by Kate Winslet. One of Roald Dahl’s best books for children, Matilda is a brilliantly funny, moving and entertaining book for kids of all ages. 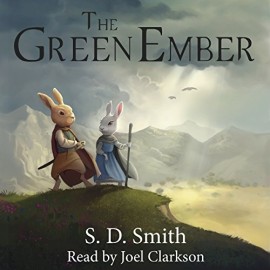 The Green Ember is a relatively new but hugely popular one of our audiobooks for kids. The book follows Heather and Picket, two extraordinary rabbits with very ordinary lives until calamitous events overtake them. 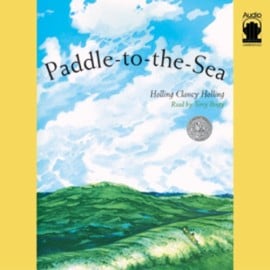 Taking kids through the Great Lakes to the Atlantic Ocean, Paddle-to-the-Sea gives a treasure chest of geography and natural science wrapped in an unforgettably beautiful story. 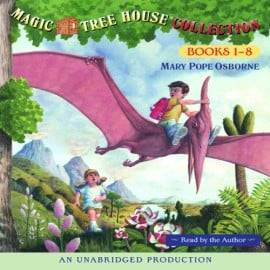 The entire Magic Tree House Collection has been lovingly recreated as an eight-book set narrated by author Mary Pope Osborne. This is an excellent option if your kids are learning to read and can follow along with the books. 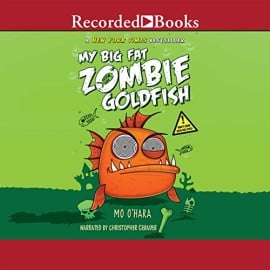 My Big Fat Zombie Goldfish is a funny, warm and extremely popular book for older kids who like ridiculous and outrageous stories. How could a story about a revenge-driven goldfish with hypnotic powers not be a hit with kids?

12. The Wind in the Willows 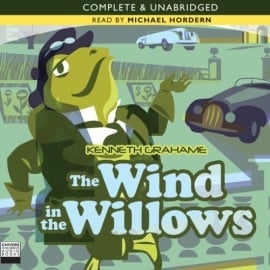 Another one of the classic audiobooks for kids, The Wind in the Willows follows the timeless tales of Mole, Ratty, Badger, and Toad, and their escapades in the British waterside. Beautifully narrated by the late Sir Michael Hordern.

13. Tales of a Fourth Grade Nothing 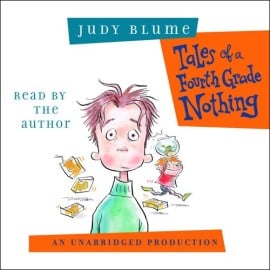 Read by the renowned author Judy Blume, Tales of a Fourth Grade Nothing is nearly a right of passage following the story of Peter who has put up with his little brother Fudge for too long. How can he get his parents to pay attention to him for a change? 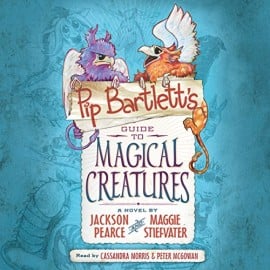 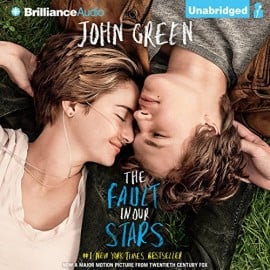 The Fault in Our Stars is definitely a book for older readers but one that translates very well in audio. Emotionally read by Kate Rudd this is a wonderful way to explore the funny, thrilling, and tragic business of being alive and in love. 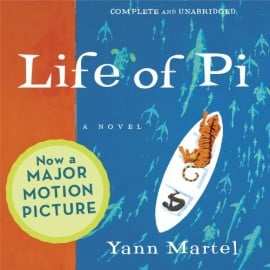 Life of Pi was the Man Booker Prize winner in 2002 and was made into a major motion picture in 2012. A magical story of survival, Life of Pi is one of the best audiobooks for kids who are looking to progress and grow their reading. 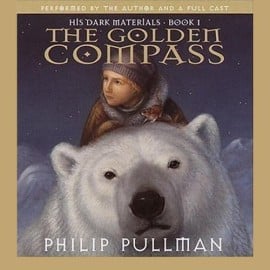 An international sensation from the moment it was published, The Golden Compass comes to a spectacular new life in this unabridged recording, narrated by Philip Pullman himself, with the support of some of the finest actors of the London stage. 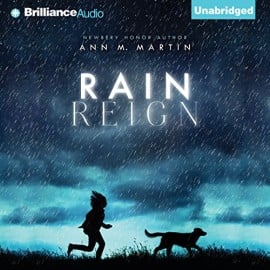 Rain Reign is the story of Rose Howard who has OCD, Asperger’s syndrome, and an obsession with homonyms (even her name is a homonym) and her dog Rain. Hearts will break and spirits will soar for this powerful story, brilliantly told from Rose’s point of view. 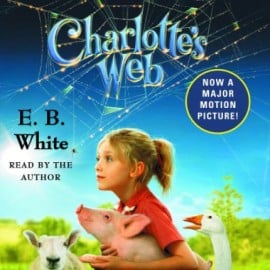 Another classic, Charlotte’s Web is the timeless story of the pig named Wilbur and the wise spider named Charlotte who come to life in this delightful unabridged recording, read lovingly by the author himself. 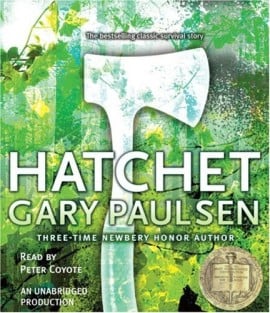 Gary Paulsen’s best-known book, Hatchet comes to audio in this breathless, heart-gripping drama about a boy pitted against the wilderness with only a hatchet and a will to live. One of the best audiobooks for kids who like an adventure. 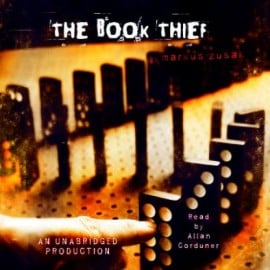 A heavier read than those above, The Book Thief is set during World War II in Germany and is the story of Liesel Meminger, a foster girl living outside of Munich. Definitely, for older kids, this is an unforgettable story about the ability of books to feed the soul.

A children’s classic, The Hobbit, written by master storyteller J.R.R. Tolkien, creates the beautiful fantasy world of the hobbit, Bilbo Baggins. Narrator Rob Inglis skillfully portrays the world of hobbits, dwarves, savage wolves, and giant spiders. He captivates listeners as Bilbo was fascinated by the wandering wizard’s stories of adventures. Bilbo must face his most significant threat, Smaug, the treasure -gathering dragon. Will he survive?

23. My Family and Other Animals

The unabridged version of Gerald Durell’s My Family and Other Animals is a comic and charming story of an eccentric family who moved to the warmer climate in Corfu, Greece. Each family member took something precious or essential; Gerry took a jar full of caterpillars.

The New York Times best-seller, The Omnivore’s Dilemma, is a bold message to young readers to change their eating habits. Journalist and supermarket detective Michale Pollan takes listeners in an unabridged version on a behind-the-scenes journey of his famous food-chain exploration. The audiobook encourages young listeners to consider the implications of their food and beverage choices.

25. Bomb: The Race to Build and Steal the World’s Most Dangerous Weapon

Bomb, a 2012 National Book Awards finalists for Young People’s Literature, is the story about the race to build and steal the atomic bomb, the world’s most dangerous weapon. The story starts with Robert Oppenheimer’s schoolyears and how science saved him from giving in to all the ridicule and bullying. The unabridged version unfolds with spying, plotting, risk-taking, deceit, and the genius who created the world’s most daunting weapon.

26. The Lion, The Witch, and the Wardrobe

A major motion picture, C.S. Lewis’ The Lion, The Witch, and the Wardrobe, has captivated many kids. Lucy was the first to discover the land of Narnia inside the wardrobe in the professor’s mysterious old house. Initially, her siblings didn’t believe her until they accidentally found themselves inside the wardrobe that stretched on forever into the frozen land of Narnia. When they met the Lion Aslan, they realized they were called to a great adventure of freeing Narnia from the White Witch’s spell.

The Lightning Bolt Thief is the first book in the Percy Jackson and the Olympians series. Twelve-year-old Percy can’t stay out of trouble. He is about to be kicked out of boarding school again because he couldn’t stand by and watch while a bully picked on his best friend. Percy becomes the prime suspect of stealing Zeus’ master lightning bolt. When mythical creatures jump out of the Greek mythology textbook, he knows he is in deep trouble, and he must find the thief soon.

What are your favorite audiobooks for kids? Share your personal recommendations in the comments below!

Lisa is a mother to 3 amazing children, EdTech coach and all-round lover of learning and personal growth. Lisa is dedicated to sharing her knowledge, experience and passion with as many people as possible and is also partial to the odd glass of Rosé.