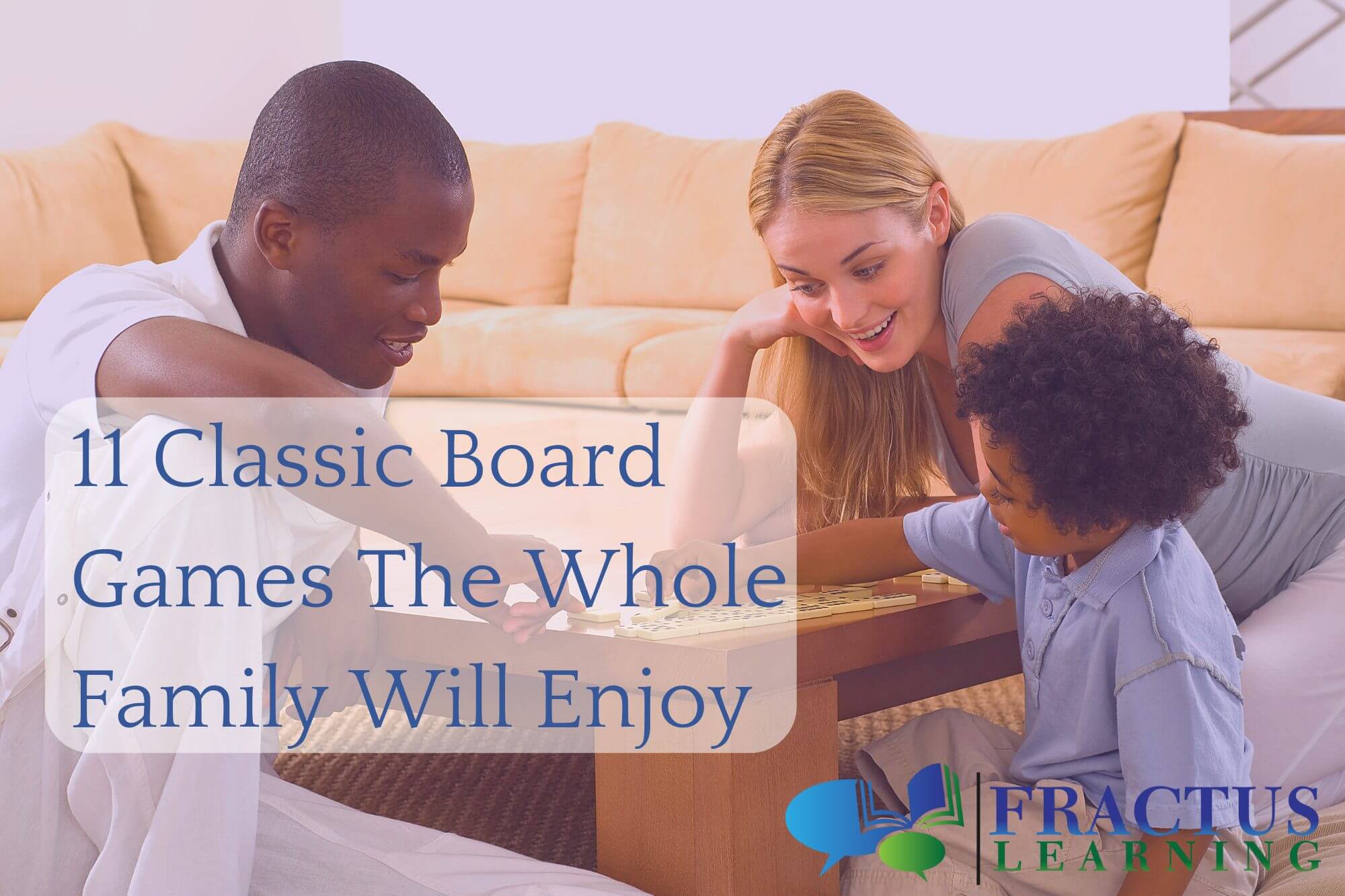 In our fast-paced world, it’s often hard to slow down and take the time to really engage with friends and family. We know we ought to do it, but the demands of work, school activities and other outside pressures make it difficult.

These classic board games are your secret weapon to help you steal a few hours a week of quality time. By their very nature, a family game forces us to talk and engage with the other players.

These games have all passed the test of time. They are great for all members of the family – children and adults included. Some will be old favorites – and others you might not have heard of. All will provide endless hours of fun for you and your family. Take time tonight to join in a family game.

(If you are looking for help with games solely for children, we have an article covering the best board games for kids you can check out.)

Monopoly – it’s the game where it’s okay to bankrupt a family member while you become richer – buying more properties and building more houses and hotels. In some households, however, it’s not okay if you play with someone’s favorite token. Everybody knows dad always chooses the Scotty dog and the boys fight about the racing car.

In theory, you can win in Monopoly within 21 seconds in four turns and nine rolls of the dice. Unfortunately, it’s not automatic – it depends on how the dice fall.

Monopoly has been around for more than 80 years. More than 1 billion people have played Monopoly in 114 different countries. Your parents played Monopoly and probably your grandparents too.

The Here and Now is a more modern version of Classic Monopoly. Although the original Monopoly board is based on Atlantic City in New Jersey, Monopoly adapts the board to countries where it’s sold. Monopoly keeps up with trends too. There’s a Games of Thrones edition, a Star Wars edition, a Monopoly for millennials, for kids younger than eight years, for smartphones, in braille, the list goes on.

Who doesn’t like solving a murder mystery? Clue (also known as Cluedo in some places in the world) is the classic ‘whodunnit’ mystery game. Ten years ago, Clue had a makeover, and the victim, the murderer, and the suspects moved from the old mansion to attending a party at a modern manor.

In the newer version, three more weapons were added and the lead pipe discarded as a murder weapon. The characters were also updated to fit into the 21st century.

Playing the detective, the object of the game stayed the same. Solve the mystery first—Who was the murder, what weapons did they use and where did it take place?

If you dream of world domination, then Risk is the strategic map board game to play. Conquer territories alone or diplomatically ally yourself with stronger players.

Gain reinforcements according to the number of territories you’ve conquered. Alternatively, decide when is the right time to trade your sets of cards for additional troops. The complexity of the strategies depends on the players. The roll of the dice, however, is random and may save the player’s territory for another battle.

There are at least 27 versions of the classic Risk game. If dominating the earth in the classic Risk or the crowns in Risk Europe isn’t adventurous enough, then move into space with the Star Wars edition or to fantasy kingdoms like Narnia or Lord of the Rings.

The territory maps may differ, but the goal stays the same, strategically conquer a content while defending your borders.

Scrabble, the word game that makes spelling a fun activity. Since the 1950s families have gathered together for a game of Scrabble. Who can forget the anticipation when choosing the seven tiles, hoping for vowels and not too many Qs, Ks, or Zs? The thrill of being stuck and then watching the player before you build a word with letters you needed to spell a word that will give you triple points.

Designed by an architect, Scrabble, was first known as Lexico in the 1930s, then it became Criss-Cross Words, and finally, the word board game was called Scrabble. More than 150 million copies have been sold in 121 countries.

Some take Scrabble very seriously. According to the Collins dictionary website, a woman had to leave a nursing home because she didn’t play Scrabble. A 5-year old boy phoned the police because his sister was cheating at Scrabble. Ballets, horses, and art exhibitions have been named Scrabble. Even Bart Simpson played scrabble using a phony word. Scrabble has even been played under water.

Sorry is a fun classic game for 2-4 players where you say, “Sorry,” and you don’t have to mean it at all. The object of the game is to race to the finish with all four tokens. With the right strategy, the cards you pick can send opponents back to start and give you the chance to say…” Sorry.”

Ludo and Parcheesi are like Sorry, using math and strategy to win a game. If the child can count, they can play Sorry. For more intricate and strategic play, players are dealt five cards at the beginning of the game.

Since the 1930s players have taken sweet revenge while playing Sorry. As the first classic board game boxed with the Parker Brothers signature logo, Sorry had its revenge on other board games.

The original intent of the board game Life was not to become rich but to have lived a good life. The game lets you choose your life path—from life at college, to work and family and finally to retirement. The original game The Checkered Game of Life, however, was depressing with its inclusion of suicide, prison, disgrace, and poverty.

In 1860, lithographer Milton Bradley was almost bankrupted when his clean-shaven portrait of Abraham Lincoln didn’t sell. In desperation, he printed copies of the board game, The Checkered Game of Life, which sold 46,000 copies within a year.

It was a bit more dark than the game we play today.

The game was re-introduced in 1960 as the Game of Life. Since then updates were adapted to mirror the current way of life.  In 1992 the game update introduced rewards for saying no to drugs and recycling trash. Today’s version includes salary cards and careers.

The year Settlers of Catan was launched, it won the coveted Spiel des Jahres and all other German gaming awards. Klaus Teuber, its inventor, doesn’t even own an original copy because the first 5,000 sold out too quickly. Since 1995, the game has sold more than 18 million copies in 30 different languages, and there are more than 80 official editions.

If you’ve dreamed of settling on an island, then you should consider playing this classic board game. It requires strategy, but you can have fun and win without destroying your opponents. No matter how many settlements you have, you cannot control all the resources. Settlers depend on trading with each other to survive and to prosper.

Trivial Pursuit – the game that was created within 45 minutes at a kitchen table, Time Magazine called, “the biggest phenomenon in game history.” Two journalists were playing Scrabble when they came up with the idea of Trivial Pursuit.

The original Trivial Pursuit tested your knowledge with 6,000 questions in 6 categories: History, Geography, Science & Nature, Entertainment, Arts & Literature, and Sports & Leisure. Since the 80s more than 100 million copies were sold. The game was updated with new categories and more than 50 editions, including a Baby Boomers edition.

Strategizing the next move on the checkered tiled board of Chess has kept many players occupied throughout the centuries.

At least three nations have claimed the ancient game of Chess as its country of origin, Persia, India, and China. The classic board game has traveled the world. When it reached the shores of England, the bishop and queen were added as pieces to the game.

The goal may be simple, to checkmate your opponent’s king, but the strategic possibilities are almost endless. Opening moves alone have more than 1,000 possibilities. In 1960, Janos Flesch played 52 opponents and won 31 chess games while blindfolded.

Chess is a game for all ages. It’s deemed to stimulate brain functions and increase problem-solving skills. Some studies deem that Chess raises IQs and may prevent dementia or Alzheimer disease.

What’s more thrilling than going up the ladder and more devastating than being swallowed by a snake that takes you all the way back to the beginning?

Originated in India during the second century, Snakes and Ladders was used to teach moral, religious values. With more snakes than ladders, the odds were greater to be swallowed by a snake than the liberty of climbing the ladder.

In 1893, England modified the game. The religious aspect of the game was removed, and the game now had an equal number of snakes and ladders. The American Chutes and Ladder version has a playground theme.

Candy Land emerged from the polio epidemic of the 1940’s. Eleanor Abbott, a polio survivor, created Candy Land as a pastime for children recuperating from this disease. Candy Land became so popular that today more than 60% of households with 5-year-old kids have a copy of the game; a game that has sold more than 40 million copies.

The original version the two kids were standing side-by-side holding hands. The 1998 version they hold hands differently and in 2010 two more kids were added to the board.

Reaching the Candy Castle first has occupied many children. The game teaches patience (in waiting for your turn), color recognition (with the colorful board, rainbow path, and cards), to follow directions and to learn and obey rules.

For many, Candy Land is their introduction to board games. It’s easy to play, even for kids who haven’t learned to read yet.

Retha Groenewald is a professional writer working for Fractus Learning. When not working with Fractus, she is web copywriter for the Christian market. Her writing is featured at Christian Web Copywriter and at Writing That Breathes Life.