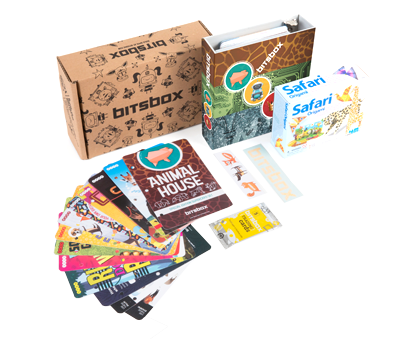 1)Kids are going to be asking for video games, apps, or other programs for Christmas this year.
2)Most parents would like their kids to grow up to be ‘creators’ rather than ‘consumers’ of this electronic entertainment.

Wouldn’t it be nice if there was a way to let your children have fun with computers while learning how to program at the same time?  You’d be able to give them a gift this holiday season that entertains and helps to set your child on a path to loving computer programming?

I’ve found the solution. After watching my nine-year-old go through a BitsBox learning box one afternoon, I’m confident this is the way to entertain and teach programming at the same time.

Find Out More At BitsBox.com

I’ll start off by telling you a little more about BitsBox, but scroll down if you want to hear more about our own hands-on experience with the lessons.

While BitsBox is targeted at 6-14 year old children interested in computer programming, I think other children could benefit as well.

Who Should Look Elsewhere?

I don’t think really young or upper-class high-school children would get as much out of BitsBox.  Younger children probably won’t grasp the concepts, while older students will likely look at the stamps as generally being aimed at a younger audience.  I’d also think children already programming in Java or Python wouldn’t stick with BitsBox longer term.  They might enjoy how quickly they could create an app, but I’d expect them to lose interest over time.  That’s just my opinion though – if you have a different experience please share it in the comments.

If you are looking for other STEM gift ideas, check out our in-depth guide to STEM subscription boxes for more ideas.

Our Verdict: BitsBox is perfect for a child showing interest in programming, or who wonders how video games are made. While an average 6 or 7 year-old might need some help getting started, older children will be able to tackle the coding on their own. BitsBox apps are perfect to help get parent-child conversations going. They are also great opportunities for a child to showcase their creative work.

BitsBox is a subscription service that helps your child to learn how to code.  While I have coding experience it’s not necessary. Neither you nor your child needs and previous experience in order to use BitsBox.  The system is really simple:

Monthly subscriptions include code lessons and a binder to store them in, a parental guide to that month’s lessons, and stickers and temporary tattoos.  My review box didn’t have a parental guide but I didn’t even notice there was supposed to be one included – the lessons are pretty self-explanatory and easy to get going on.

Our Hands-on Experience With The BitsBox STEM Box

My child has shown an interest in programming in the past.   He’s used Scratch (a block based programming language) to create but generally lost interest after a short period of time.  I wasn’t sure if it was because he got bored with programming in general or if it was just that style of programming. 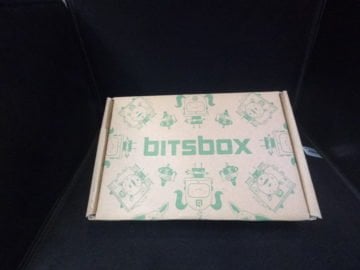 So when BitsBox was kind enough to provide us with one free review copy of their programming-focused subscription, I knew I had the perfect guinea pig.  I already knew about how long a programming session could hold his interest, so I was interested to see if his reaction to BitsBox would be any different.

I’m glad to report that he loved using BitsBox.  When I first explained to him he’d need to try it, he acted like he does with most things that cut into his Roblox gaming time – with some hostility.  We compromised and I told him he’d only need to follow along for 30 minutes. If it wasn’t fun after that long he could stop.

I was available to help if he ran into trouble, but I told him I wanted him to try to figure out how to use it on his own as much as possible.  This didn’t need to turn this into a computer programming lecture (which frankly, BitsBox would be great for); it was important to see if BitsBox would hold his interest as he learned at his own pace.

I figured he would at least enjoy playing with the system for a few minutes.  The box kit contains large and small cards, along with some stickers and tattoos.  All of these cards have workable apps on them.  They start from 3 line bits of code that creates a lava planet with a monster that says “wooyah!” through the speakers on up to an entire mini game call Alien Blaster.

Fast forward to later that evening. I eventually had to pull him away at the three hour mark because we had somewhere to go.  This shocked me – he had a green light to play video games  instead.

What I did not anticipate was how quickly he was able to jump from simply reading and typing the code provided to creating his own features.  Within a half hour, he started figuring out that he could add more characters (called ‘stamps’) to the screen by assigning them to variables and acting on them.  Once that happened, the real fun began.

Sean began to rotate through different characters, motions, actions and sounds at an amazing pace.  I could see he was making up stories in his head like he does when he played with action figures.  Now he was able to make those stories come to life on the screen.

This was all happening using an type-based “dot” programming language.  If you have any experience with Python,Java or even VB you’d be right at home reading BitsBox code.  I didn’t explain it to him, but he figured out through short examples that adding a .move() after a stamp’s variable would make the astronaut move around the screen.  Changing the numbers in the parenthesis would change how or where the astronaut would go.

The following video is a screen capture of him at work at about 2 hours into his learning experience.  It shows what a 10 year-old can create using  BitsBox the same day as opening up the box:

This is important because when he runs into “real” code someday, he’ll already have have experience seeing the style, and should easily grasp how it works.  While I think “block-based” programming has it’s place, one downside is a child needs to make a jump from blocks to “real” programming style.

Your child won’t have that issue using BitsBox to learn.

Will Your Child Get Bored Quickly?

One of the concerns I initially had before letting my son play with it was the shelf life of the system.  I only had one module in front of me – I wondered just how far along could an average child would get before this might get boring.  After watching my son interact and seeing how many commands there are built into the language, I don’t think that’s a legitimate concern. They might get sick of programming in general, but it won’t be because of the BitsBox language.

I spoke to Emma at BitsBox, and she indicated they have subscribers that have been using the system over 2 and a half years.  She attributed this to the progressive nature of the lessons which keeps interest high, and the fact you can build your own apps from nothing using their platform.  So a creative student will always learn a little more and find ways to tweak an app idea, or come up with a completely new on on their own.

Find Out More At BitsBox.com

As our family was out driving later that night, I asked Sean the key question:  Would he be happy if he got a BitsBox subscription as a Christmas gift?

“Yes. But I’d like Star Wars Battlefront II too.”

And that my friends tells you all you need to know: BitsBox is good enough to be spoken in the same breadth as the latest Star Wars cash-grab.  There’s not much higher praise in the world of pre-teen boys.