Canadian based and internationally known educator George Couros is somewhat of a pop star in the digital world that I inhabit. Indeed, he is the Justin Timberlake of educational innovation. (Trust me, he’ll like this comparison!) George has a few more follower Twitter followers than me; well, 141 000 more to be exact! I even saw him once; at ISTE 2014 in Atlanta, but he was surrounded by groupies at the time and I was taking selfies with Kevin Honeycutt. This, of course, is all rather tongue in cheek, as George is undoubtedly a leading educational thinker whose “reach and influence” now rivals the likes of the sainted Sir Ken Robinson.

The Innovator’s Mindset was published in 2015 by Dave Burgess Consulting Inc. Yes, that Dave Burgess who teaches like a pirate. Last year I read it twice and promised Fractus Learning this review but couldn’t come up with a hook. (Did you see what I did there?)

Now, I’m as OCD as you could possibly be; so much so, that I prefer to call my condition the more alphabetically satisfying CDO. One of my compulsions is list writing, a form of hypergraphia. And, there’s the hook, George Couros is also a fan of lists and for him, eight seems to be a magic number. What else could I do then but present a list of my top eight takeaways from what “Captain Dave” describes as “… the manifesto we have been waiting for to lead us out of the jungle of jargon and into the rarefied air of real change.” (Publisher’s Foreword, p. ix)

For all educators, there is a summary lesson in the collapse of the Blockbuster franchise. The company failed to see “the writing on the wall” and failed to innovate. George Couros, like many of us, has seen far too many teachers clinging to their Beta cassettes and proclaiming there is no need to change. (Told you it was a clever title.)

2. “Innovation is not about the STUFF; it is a way of thinking.”

This is most assuredly a too often made mistake and I know because I’ve made it. Like an oversized male bowerbird, I used to seek out every new “bright and shiny” gadget. Now I accept this Couros tenet; the most important tool in any classroom is the mindset of the teacher.

3. “Effective leadership in education is not about moving everyone from one standardized point to the next but moving individuals from their point A to their point B.”

As a passionate digital advisor, my greatest frustration has been teachers who didn’t share my passion. Now I work from this understanding and acknowledge the need for individualized professional development. There’s no sense in advocating fifty new educational technology tools to teachers who still struggle daily with MS Word, email or printing.

4. Eight Characteristics of the Innovator’s Mindset

See, George loves the number eight! He is indeed fortunate to have access to the awesome sketch noting ability of Sylvia Duckworth. The graphic speaks for itself but, before you read on, give yourself a mark out of eight.

5. “Let’s start asking kids to find problems and give them a sense of purpose in solving something authentic.”

This is not a new idea but it serves as a great reminder that the world has changed, irrevocably. Authentic learning and an authentic audience should be the cornerstones of contemporary education. Why would you use a 3D printer to make Pokémon figures when you could make components for a prosthetic hand? (Be sure to check out www.enablingthefuture.org)

6. Eight Things to Look For in Today’s Classroom

Yes, eight things. Again, before you read on, examine Sylvia’s sketch note and give your classroom a score. And be honest; I’d give myself a five at best, maybe a 4.5! 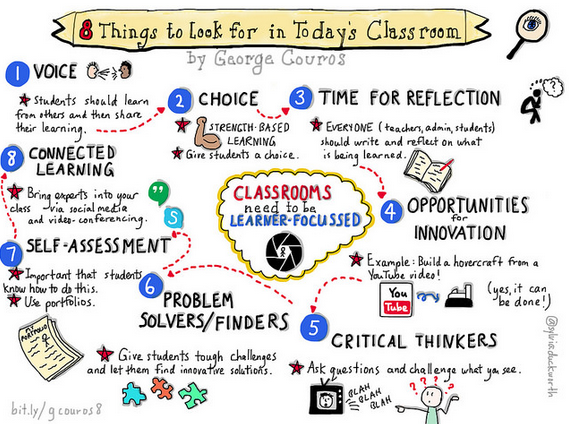 7. “Creativity is where we start to think differently, and innovation is where creativity comes to life.”

Creativity has long been part of the educational debate; just think Sir Ken and his belief that education kills creativity. Here, Couros makes creativity part of the teacher’s mindset. We can’t just expect students to inject the creativity if it’s not foregrounded and modeled by their teachers. Late last year my school launched a new Teaching and Learning document which establishes creativity, social learning and engagement as the pillars of our community. I’d like to think George would approve. As for me, I’m no longer an eLearning Manager (the term is so outdated) but rather a Digital Advisor: Teaching and Learning.

8. The world today is “participatory” and “… schools can no longer ignore this cultural shift; we need to accelerate it.”

The world has changed dramatically since I made my teaching debut in 1981 (hand cranked copiers, film projectors and Commodore 64) when I suspect George was still in nappies. The greatest change however, is indeed, the participatory nature of modern culture. Schools need to acknowledge how students interact with the world and allow that social learning to continue apace.

*If you need proof: last year I participated in an Innovator’s Mindset MOOC (#IMMOOC) conducted by George and several of his high-profile colleagues. You will find the weekly “broadcasts” curated on YouTube here.

This is just a small sample of the myriad ideas in The Innovator’s Mindset. Read it, because as the cover promises, you will discover how to “empower learning, unleash talent and lead a culture of creativity.”

Let me leave you with one final quote from The Innovator’s Mindset: 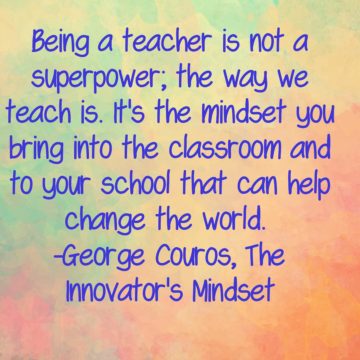 PS: Now I’ve written this sparkling account … I just hope I get to meet George one day. Maybe I’ll even get a selfie or an autograph.

Have you an idol who or do you admire George and his book’s teachings as much as I do? Please—share your thoughts and comments with me below.