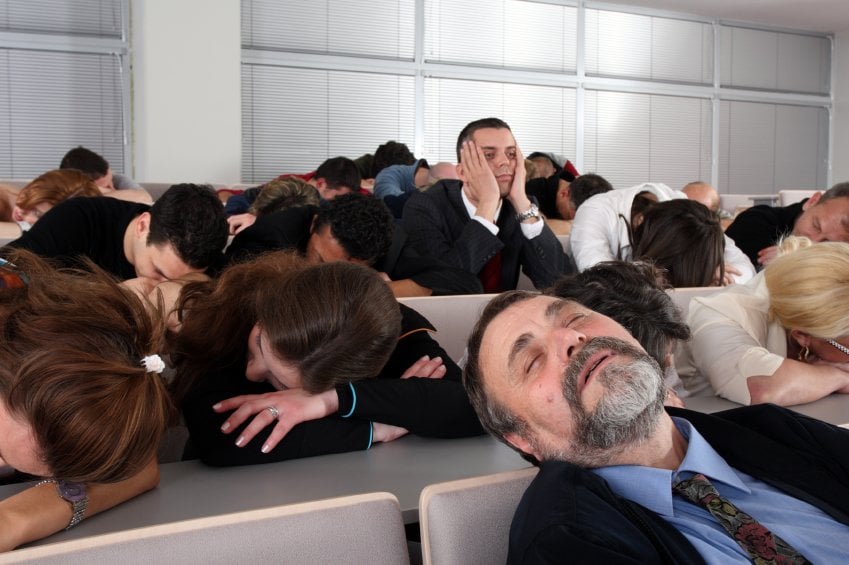 Over the course of 2013 my school paid out a considerable sum for me to attend a range of Education Technology conferences. Unfortunately, I came back from all of them feeling largely dissatisfied and in some cases even “ripped off.” I am confident that others have had the exact same experience; there is a great deal wrong with the current conference “model”. However, I will now outline my three specific objections before you simply write me off as “The Grinch Who Stole Professional Development.”

The past few years has seen the emergence of a number of EduTech Rockstars; the perennial keynote speakers who are, in reality, “one hit wonders.” I have heard one very well known speaker deliver essentially the same dull keynote on three separate occasions. Surely a highly paid speaker, knowing a good portion of their audience on a first name basis, should put genuine effort into providing something new. The listener needs to be encouraged, provoked, excited; nodding knowingly, not nodding off. But then, I’m not the only disaffected delegate out there as the following tweet testifies:

Hmmm, reading a lengthy statement is an unimpressive way to present a keynote, may as well just make it a handout #acelconf13

I have seen some truly engaging keynote speakers, Professor Stephen Heppell springs readily to mind, but these people have combined real world educational experience with great insight in an easy-going, entertaining “package.” Dean Groom, one of the founders of Massively Minecraft and Manager of Educational Development in the Faculty of Arts and Social Sciences at the University of New South Wales (see deangroom.com) captures my objection perfectly in this tongue in cheek tweet (at least I think it’s tongue in cheek):

I’m now available for International speaking engagements: ideally I’d like to use lots of buzzwords and stay in fancy hotels (Groom, Dean @Type217, 3/10/13)

So, come on conference organizers, take a risk and stop giving us the same old tired keynotes. (And yes, I’m available too!)

I can fully understand why edcamps, teachmeets, tweetups and unconferences are gaining such widespread acceptance and notoriety. Each of these models is essentially “organic” and very much driven by the needs and passions of the participants. I feel there is a definite lack of vision amongst conference organizers who pack their programs with “Breakout Sessions.” (Now there’s a buzzword for you. However, they are aptly named, for once I’m there, I often have a desire to breakout!).

Surely, in this current technologically rich era, it would be relatively easy to quickly organize sessions based upon the stated desires of delegates. For example, I would happily prepare a presentation or workshop overnight if I knew I had the guarantee of a committed audience for the following day. Amazingly, though not surprisingly, I just read the following on Twitter from Matt Esterman (be sure to follow him @mesterman)

There you have it conference organizers; it’s time to move ahead or be hijacked. The vast majority of your paying customers are already amongst the converted; move ahead to the next stage and give us what we want, not what you think we need. There is a reason why your attendances are falling and participants are falling asleep.

Now to complete my festive season whinge-fest (… move over Ebenezer Scrooge, there’s a new kid in town.) I understand that conferences are big business and that sponsors are needed but they are also the source of my pet hate. No, it’s not the fact that I’ve never won a single raffle prize or lucky draw. It’s about the number of times that I’ve naively signed up to workshops that have been described in very clever but ultimately deceptive terms. But I suppose no one is ever going to sign up for a session entitled “Buy Product X and We’ll Let You Out or We’ll Just Harass You With a Flood of Emails.”

So there you have it conference bosses; can you handle the truth? Yes, I’m being deliberately provocative and yes I’m still going to ISTE 2014 in Atlanta. You may be thinking, well if you can do a better job, go right ahead. And in fact, I intend to.