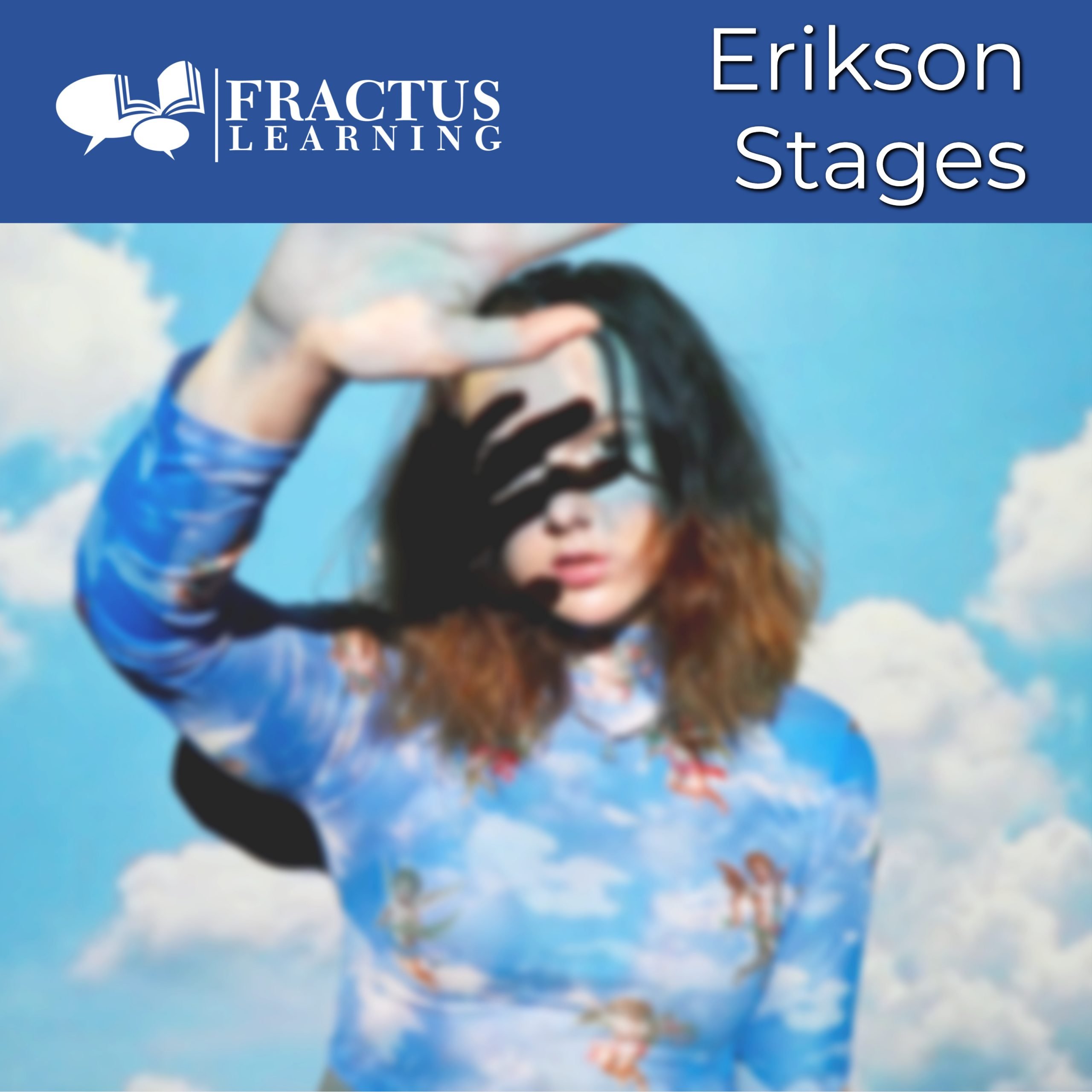 Ever have an identity crisis? You aren’t alone.

Dr. Erikson would say everyone has had multiple over the course of their lifetimes.

Erik Erikson believed personality developed in stages throughout a person’s lifespan; in each stage, a person faces a crisis they need to resolve to develop the psychological quality for that development stage.

Who Was Erik Erikson?

Erik Erikson (1902-1994) was known for his theory on psychological development. His Danish mother, Karla Abrahamsen, married a German pediatrician, Dr. Theodor Homburger, who adopted Erik—keeping the adoption a secret until late in his childhood deeply affected Erik’s personal identity development. His personal identity development became central to his theoretical work. When he became an American citizen and started working at Yale, he changed his surname from Homburger to Erikson, a name he invented.

He was a German-American developmental psychologist and psychoanalyst. Invited by his friend Peter Blos to tutor art at Burlingham-Rosenfeld School for children, he met Sigmund Freud’s daughter Anna Freud. Noticing his sensitivity toward children, she encouraged him to study psychoanalysis at Vienna Psychoanalytic Institute. He also studied and received the diploma on the Montessori method of education focusing on child development and sexual stages.

Erikson was one of the originators of ego psychology and a neo-Freudian psychologist. Neo-Freudians agreed with the fundamentals of Sigmund Freud’s psychoanalytic theory but adapted it with their ideas, opinions, and beliefs. Erikson’s theory focused on psychosocial development that built upon Freud’s psychosexual development.

Erikson proposed that a person’s personality develops through eight stages ranging from infant until the life cycle completed at the end of their lifespan. Each of the eight stages of psychosocial development had important events and outcomes related to that specific stage. According to Erikson, the crisis causing conflict at each psychosocial development stage could result in a person developing or failing to develop the psychological quality for the particular stage.

A sense of ego strength accompanies success, but failure could lead to feeling inadequate. Although the growth potential is high during this identity crisis, the potential for failure is also high.

The first stage is the most fundamental stage, the period between birth and 18 months old. Babies are wholly dependent on their caregivers for survival. Based on how their caregivers provide food, warmth, love, nurturing, and safety, babies learn to trust or mistrust.

A baby that develops a sense of trust sees the world as safe and predictable. Caregivers who are sensitive and responsive to their child’s needs help them develop basic trust by feeding the baby when it’s hungry, giving comfort and security with physical contact and warmth, and responding to a baby’s cries.

If a baby’s needs aren’t met or mistreated, the infant withdraws and develops feelings of anxiety, fear, and mistrust. If caregivers reject the child, are inconsistent, or emotionally unavailable, the infants learn not to depend on or trust adults in their life.

Erikson believed the outcome isn’t 100% to one side but a balance between the two opposing outcomes. A child with hope is open to new experiences with wariness for danger. Their sense of trust gives hope that when a crisis arises, people will help and support.

The second stage of the eight developmental stages is during early childhood, from 18 months to three years, when your toddler develops a sense of personal control over physical skills. The child moves from the previous stage of total dependency to this next stage, showing signs of independence. They’ve learned to trust the world, and now they want to gain control of their world.

Realizing they can do things independently, children develop a sense of independence by displaying preferences and making decisions; parents will notice sudden toy preferences, select their clothes and dress, and be ready for toilet training.

Allow toddlers to gain control and make choices to help develop their sense of autonomy as they develop physical skills. Potty training plays an important role; gaining control of bodily functions is a significant achievement for your little one. It gives them a sense of accomplishment and independence. The opposite outcome is shame and doubt when toddlers feel ashamed of accidents or struggle to master the potty or toilet. Parents should offer reassurance and faith in their child’s ability to succeed and not punish them or react negatively to making mistakes.

According to Erikson’s theory of psychosocial development, the successful outcome is the virtue of will. The balanced result is toddlers with the ability to act with intention within reasonable limits. Confidence and security in their ability to survive in the world are essential for developing and mastering skills in subsequent stages. Overly criticized and controlled, toddlers become over-dependent upon others with a lack of self-esteem, and with a sense of inadequacy, they develop shame and doubt about their abilities.

Outcome: Will versus compulsion

The third stage of Erik Erikson’s stages of development is the play stage; the child is in preschool (three to five years old) and uses play and social interactions to affirm power and control over their environment.

Children who successfully completed the earlier stages of psychosocial development explore their environment with trust, and they have the confidence to act independently; they develop a sense of purpose. Although sometimes frustrating, parents need to give kids the opportunity to have a say in controlling their lives, but within safe boundaries. By modeling and reinforcing good choices, parents can guide their kids.

Giving kids the freedom of imaginative play, they also learn that they can achieve goals and it’s okay to make mistakes. Children begin to develop a balance of willingness to work with others and taking the initiative. However, children who experience a sense of guilt during this stage of psychosocial development will become fearful of trying new things and interpret mistakes as personal failures. Parents should be mindful not to over-direct their kids, inhibiting developing confidence and a sense of initiative. Ignoring or treating their questions as unimportant can also generate feelings of guilt.

The fourth stage of psychosocial development occurs when kids go to elementary school; age ranges from five to twelve. Going to school broadens their sphere of influence, and they learn new skills to cope with academic and social demands from friends and classmates.

Success leads to a sense of competence and pride in their abilities. How well they do in schoolwork influences their development of self-confidence, which is vital in the successful development of the fourth stage of Erikson’s psychosocial theory.

Parents and teachers can help kids develop competence by encouraging them to learn new skills, not just when they successfully complete an assignment.  Excessive praise may lead to arrogance. Love and encouragement benefit all children and help kids who struggle to overcome difficulties instead of becoming passive because of feelings of inferiority.

The adolescence stage of Erikson’s stages of psychosocial development occurs during the child’s teenage years. During adolescence, the transition from childhood to adulthood results in a state of identity confusion. Identity evolves from social relationships, values, beliefs, and memories; your teen will be testing identities with different behaviors, activities, daily interactions, roles, and personal relationships.

According to Erikson, ego identity formation is one stage that is vital and central to the personal identity confusion stage of psychosocial development. Ego identity is the conscious sense of self that develops through daily interaction with others.

Role confusion occurs during the adolescence stage if the child is inhibited from establishing their identity through experimentation; identity vs. role confusion is carried forward into later life. Instead of a successful life, the person is unsure, disappointed, and lacks commitment.

During the early adulthood stage, the sixth stage of Erikson’s stages of psychosocial development, a person with a strong sense of self is ready to commit to long-term relationships. Although young adulthood needs loving, committed, intimate relationships, those with a poor self-image from preceding stages often struggle with loneliness, depression, and isolation.

Young adults need loving, reciprocal relationships where partners share, listen, and support each other; it is more than sexual relationships. Successful completion of this psychosocial stage results in strong, enduring, positive, and intimate relationships with partners, friends, and family.

A strong sense of isolation harms a person’s physical and emotional well-being and increases the risk of loneliness, depression, and health problems. Factors like divorce, death, fear of commitment, past relationships, and fear of commitment can cause isolation. Personality development resulting in the sense of identity in previous psychosocial stages, specifical adolescence, leads to a person’s readiness or fear of intimacy.

The seventh stage of Erikson’s stage theory of psychosocial development occurs during middle adulthood. Reflecting on life is characteristic of adults between 40 and 65 years old. Generativity is the desire to nurture, contribute, and create things that will outlast their lifespan. It is more than being a parent of the next generation; it’s contributing and making the world a better place with meaningful contributions, including raising children and successful careers.

Success in this adult stage leads to a sense of accomplishment and feeling useful. Generativity motivates healthy behaviors, positive relationships, and productivity. The opposite is stagnation; life reflection leads to a sense of regret and dissatisfaction. People have the choice to make adjustments leading to fulfillment or stagnating and living in regret.

The eighth stage of development occurs during late adulthood when people look back on their lives, reflecting what they’ve accomplished and didn’t accomplish. Erikson’s psychosocial development theory is unique in that it covers development throughout an entire lifespan, from birth, the developing child, to old age.

During the late adulthood stage, a person experiences integrity when satisfied with their accomplishment. Ego integrity, wisdom, and ending their life at peace are the positive outcomes. The opposite is despair when seniors explore life and feel shame, regret, or disappointment about their life.

late in their lives, Erik H. Erikson and his wife, Jane M. Erikson, concluded there were nine stages, not eight life stages. They re-examined the eight stages and found that the elderly revisited the previous eight development stages in their life.

Joan Erikson added the ninth stage in The Life Cycle Completed: Extended Version. The psychosocial crisis of the elderly had new demands, daily difficulties, and reevaluations. All eight stages were revisited with the less desirable outcomes taking precedence; the syntonic quotient versus the dystonic quotient (for example, mistrust vs. trust). They found the elderly dealt with these conflicts in new ways.

The existence of a nineth stage suggests that human beings don’t stop psychological and spiritual growth.