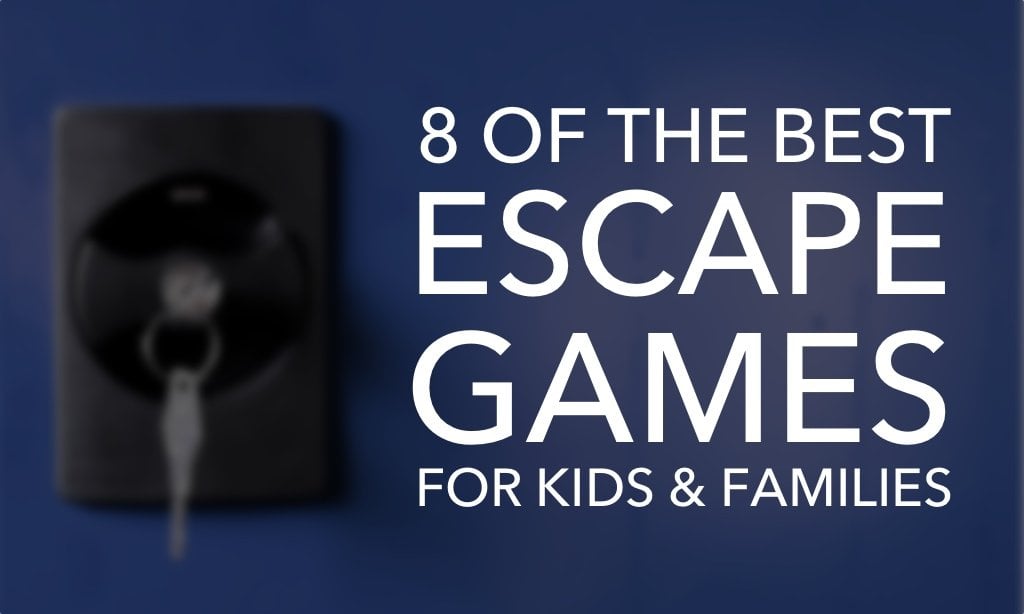 Escape games have seen a recent surge in popularity, mostly due to apps and online games that require the player to solve puzzles to escape some sort of predicament. However, escape games that are hands-on board games and puzzle games have been popular for decades and continue to provide hours of fun without ever turning on a screen. In contrast to their electronic counterparts, escape board games allow for multiple players, a tactile experience, and many games offer players the opportunity to work together to escape. Escape games are great for the home and the classroom and help kids improve problem-solving skills, communication skills, and strategic skills. They also happen to be fun and exciting to play!

Escape Games for Kids and Families 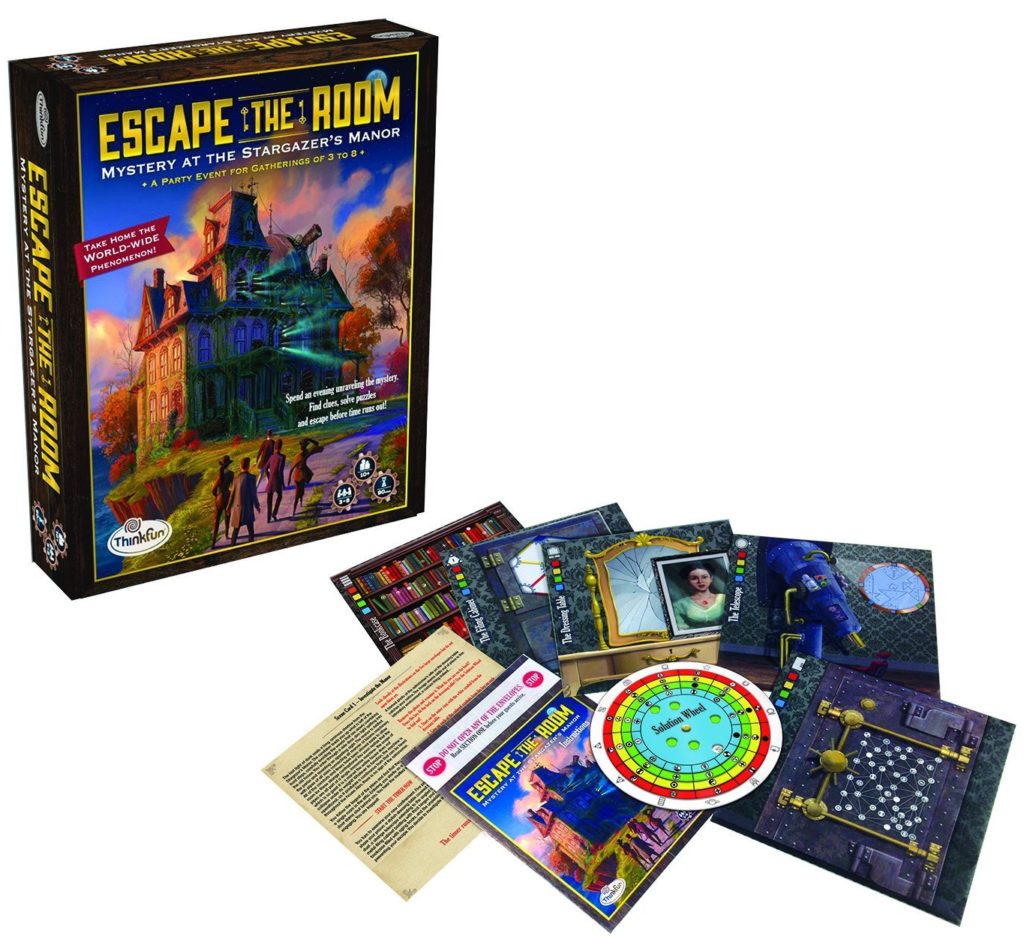 Escape the Room Stargazer’s Manor Board Game may be a little challenging for younger children on their own, but is a lot of fun for older kids, teens, and families. A group or family could easily play with younger children by putting them on a team with an adult or older child. More than just a board game, it’s a “party event” where players must uncover clues, find hidden objects, and solve challenging puzzles in order to solve the mystery of the manor. Party guests must work together to save the astronomer before time runs out. 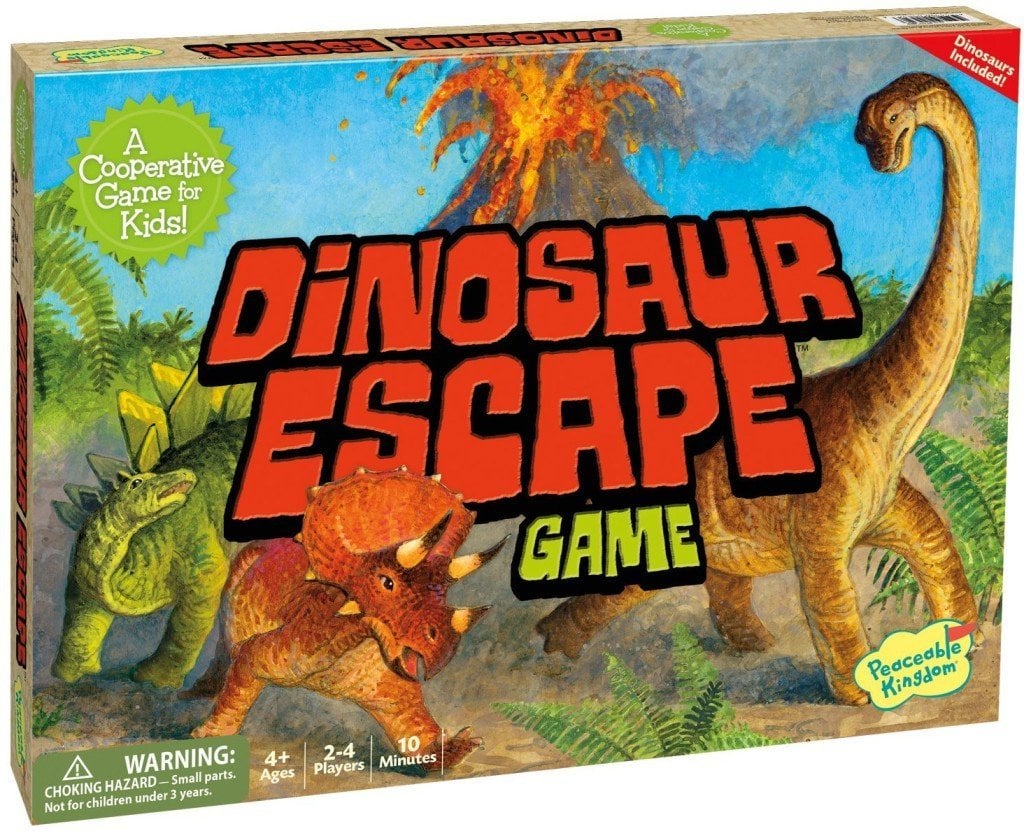 Encourage kids to exercise important problem solving-skills while working in a group with the Peaceable Kingdom Dinosaur Escape Award Winning Cooperative Game for Kids, the winner of four awards including Oppenheim Toy Portfolio Gold Award and NAPPA Gold Award. In this exciting board game, two to four players work together to help three dinosaurs escape from an erupting volcano. When the three dinosaurs make it successfully to Dinosaur Island, everyone wins. Dinosaur Escape is for children four years and older and requires no reading, so it’s an excellent choice for younger kids and especially young dinosaur enthusiasts. 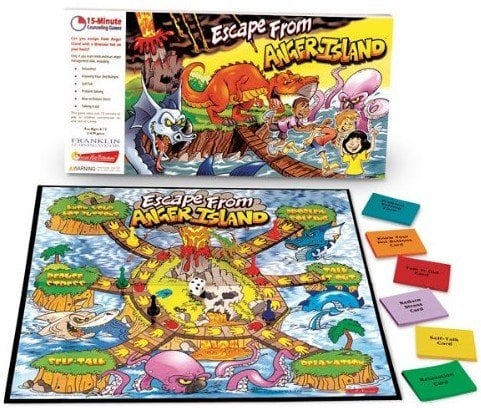 The Franklin Learning Escape from Anger Island Board Game is an incredibly unique board game that focuses on important social skills that are rarely addressed in escape games or any games for that matter: anger management and impulse control. Though Franklin Learning lists Escape From Anger Island as a game designed for special needs students that may struggle with certain anger management skills, it’s a fun way for ALL students to master problem solving, recognizing hot buttons, self-talk, reducing stress, talking out conflicts, and relaxation. Two to six players play short 15 minute sessions which is perfect for children with shorter attention spans. This is an amazing tool for both classrooms and families. 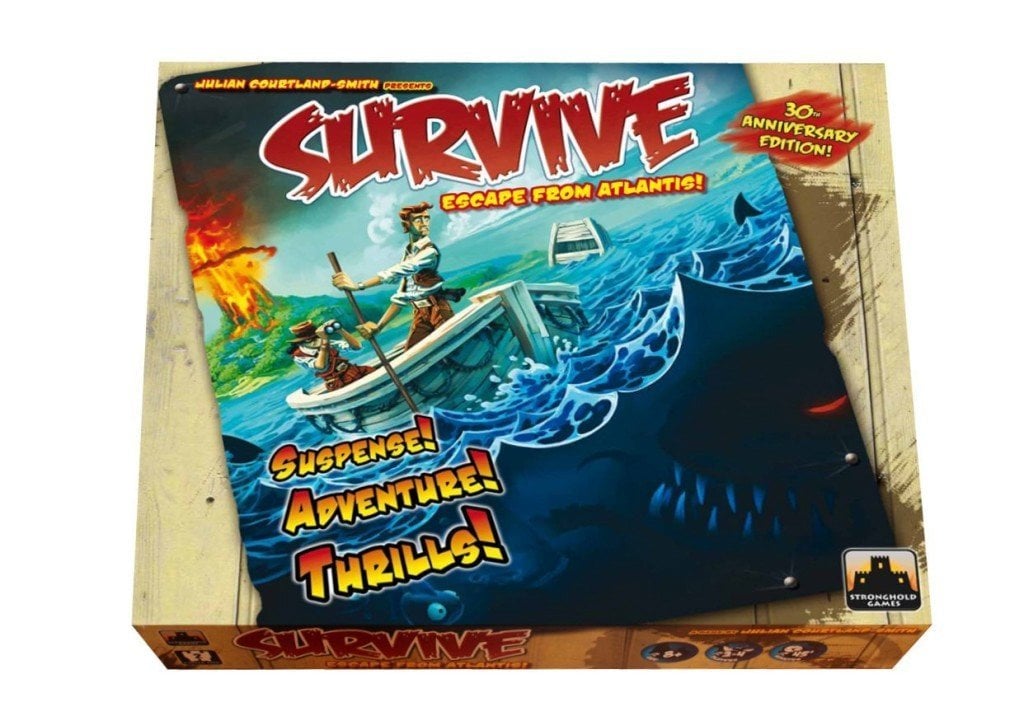 Survive Escape From Atlantis 30th Anniversary Edition is an exciting and competitive escape game for two to four players. An underwater volcano has erupted and the island of Atlantis is sinking into the sea. Players must navigate waters by boat or swimming and avoid sea serpents, whales, and sharks on the journey to a safe nearby island. After 45 minutes, the volcano on Atlantis explodes and the game is over. The player with the most “Explorer points” wins the game. Escape From Atlantis is a re-release of a popular game from the 1980’s and has been completely upgraded; kids will love the adventure and parents can enjoy the nostalgia of a game they played as children. 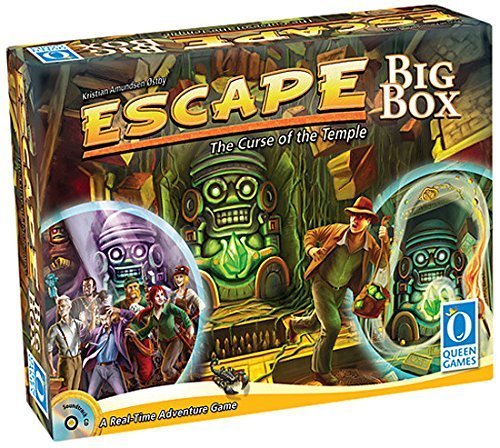 Escape games like the Escape Big Box Game are often played in real time and this game in particular has a game time of exactly ten minutes, perfect for quick gameplay. Fortunately, the game has tons of options so that the same game is never played twice and there is the potential for nearly endless hours of gameplay. The Escape Big Box is a cooperative game in which all players must escape from a temple before time runs out. This version includes an atmospheric soundtrack and several expansion packs like “Treasures”, “Curses”, Illusions, and more! 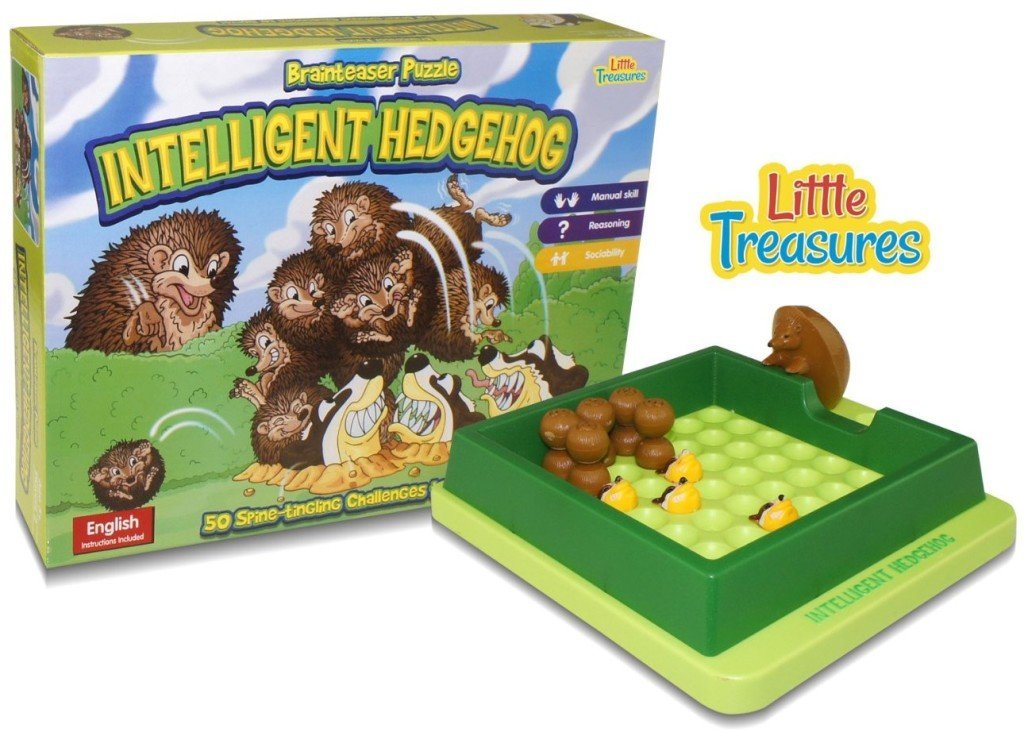 7. The Grape Escape Board Game 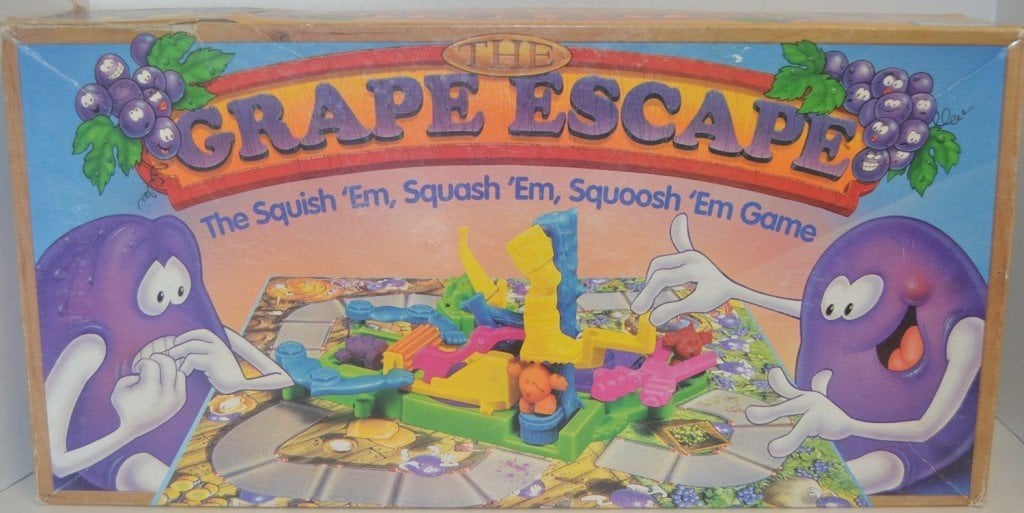 The Grape Escape Board Game is another game that may spark some nostalgia in adult players. It’s a simple concept: your grape (made of play-doh) must escape the factory without getting squished. It’s a similar game to Mousetrap, though the assembly is not as complicated. It may not have the depth of some other escape games, but younger kids (and nostalgic adults) will love to play. Children will enjoy building the factory and the game is a fun example of simple physics and cause and effect. 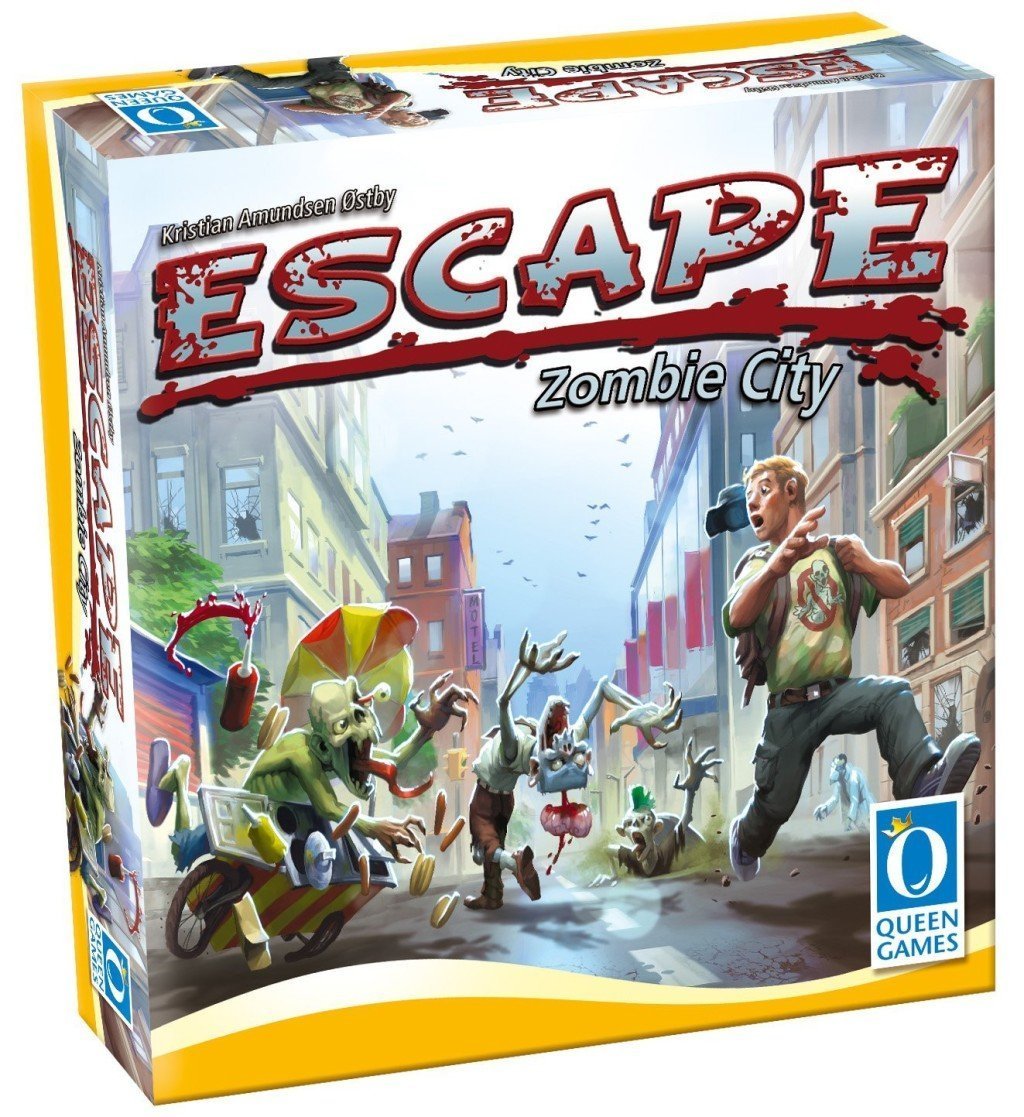 Escape Zombie City in an exciting, cooperative, and interactive dice game for the entire family. It’s simple to learn and gameplay is a quick 15 minutes. Players are survivors of the zombie apocalypse and must escape an oncoming hoard of zombies by collecting supplies, starting up an old VW Microbus, and getting out before becoming dinner for the undead. This game is great for fast-paced fun!

Escape games are fun, exciting board games that can be enjoyed by kids and adults alike. Tell us about your favorite escape games in the comments below!