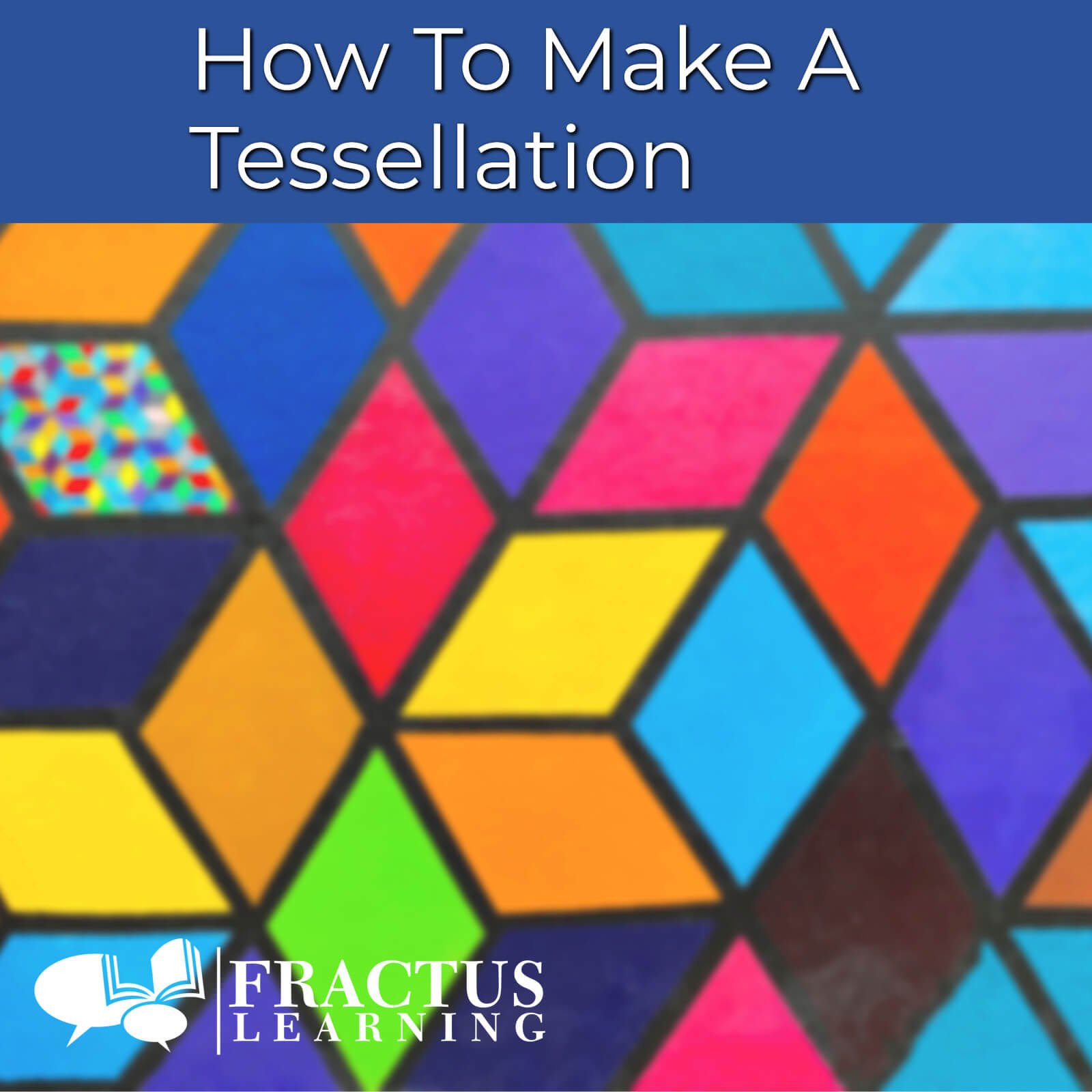 It’s incredible how a tessellation design transforms a blank piece of paper into an exciting and beautiful design. Creating tessellations is for all ages and more straightforward than it looks. Art and math teachers use tessellations in their lessons, art projects, and inspiring STEAM-related exercises. There is even a World Tessellation Day on June 17.

Would you like to make your own tessellation art? This guide covers easy step-by-step instructions for all ages to do tessellation craft projects. It’s not an art lesson, but the introduction to the no-cut and cut-method are ways to create projects for kids to make their tessellation artwork at school or home.

What Is A Tessellation?

Tessellation forms a pattern by repeatedly arranging tiles or shapes without gaps or overlays between the shapes – think mosaic pattern tiles and how jigsaw puzzles interlock. A tile refers to the repeating tessellation shape.

Simple tessellation patterns have a basic design using a geometric shape like a square or triangle; they can also be more complex using irregular shapes. A chessboard is an example of a simple tessellation; the squares meet side to side without gaps. The geometric-shaped tile must tessellate itself and fit precisely in the tessellation.

Tessera in Latin means a small stone cube, square tablet, or die; in Ionic, Greek tesseres means four. The first tilings were made from square tiles, and the Romans used mosaic pieces to create artistic tiles and floors.

Which Geometric Shapes Can Tessellate?

The Sumerian culture, about 5000 years ago, used tessellations to decorate columns. Almost every civilization created tessellations in one form or another—cultures like the Chinese, Indian, Arabic, and Irish practiced tiling in various complexity.

The German mathematician, Johannes Kepler’s documentation in 1619 are some of the earliest studies on tessellations. He was the first to explain the hexagonal structures of snowflakes and honeycombs; he also wrote about regular tessellation and semi-regular tessellation.

The Russian scientist Yevgraf Fyodorov was the first to study tessellations mathematically. Studying the arrangement of atoms in crystalline solids, Fyodorov proved that every periodic tiling features one of seventeen different groups of isometries.

The 20th-century artist Maurits Cornelis Escher, born in 1898, is one of the most famous graphic artists in the world. He was known for detailed realistic prints that achieved unusual optical illusions and conceptual effects.

Studying at the School for Architecture and Decorative Arts in Haarlem, Netherlands, MC Escher became interested in graphics. Although he struggled with maths at school, he made mathematically inspired woodcuts, mezzotints, and lithographs.

Inspired by nature, Escher studied insects, plants, and landscapes using the details in his artworks. During his travels in Spain and Italy, he was fascinated by the mathematical structure of architecture, Moorish Alhambra Palace’s tilings, and the Mezquita of Cordoba.

M.C Escher became well-known among mathematicians and scientists, but not as much as an artist until 70 years old; a retrospective exhibition made him famous in the art world. In the 20th century, he became widely know, and in the 21st century, he was celebrated with global exhibitions.

The National Gallery of Art collection includes more than 400 works by Escher; it has the preeminent collection outside Holland.

His most famous images are Drawing Hands, where each hand draws the other, and Hand with Reflecting Sphere, a self-portrait holding a crystal ball.

Unlike M.C Escher, who designed on paper, Rober Fathauer designed directly on a Macintosh computer. Born in Illinois in 1960, Fathauer was interested in art from an early age. He received the Bachelor of Science with a double major in Mathematics and Physics from the University of Denver and his Ph.D. in Electrical Engineering from Cornell University.

Dr. Fathauer was a follower of MC Escher, the most famous tessellation artist in history, and was inspired to create a variety of tessellations. In 1993, he founded a business, Tessellations, producing tessellation puzzles, mathematics manipulatives, books, and classroom posters.

He started creating tessellations on the computer for better expression of his intricate designs. His art, which inspired mathematicians, included tessellations, fractals, illusion, symmetry, and knots.

Different Types Of Tessellation And Styles

A regular shape in mathematics means a shape with equal sides and equal angles. Squares, hexagons, and equilateral triangles are regular shapes that create regular tessellations.

A semi-regular tessellation (also called Archimedean) consists of two or more regular polygons of the same length. With the same arrangement of polygons at every vertex (corner where they meet), there are eight types of tessellations. They comprise different combinations of equilateral triangles, squares, hexagons, octagons, and dodecagons. Each tessellation is named for the number of sides surrounding each vertex.

These tessellations are named according to the number of sides of the shapes surrounding the vertex.

Monohedral tiling use only one shape that rotates or flips to form the patterns. Mathematicians call such a shape congruent. Three-sided and four-sided shapes tesselate in at least one direction.

Create the dual by drawing a dot in the center of the polygon. Connect all the dots and erase the original pattern.

Aperiodic tessellation designs are non-repeating patterns using shapes like pentagons or spirals. The English mathematical physicist Robert Penrose, who shared the 2020 Nobel Prize in Physics with Reinhard Genzel and Andrea Ghez, is also famous for his Penrose Tiling. He created aperiodic tilings with pentagons that could cover an infinite area without overlapping, leaving a gap, or repeating the pattern. He used two types of symmetrical tiles to create infinitely changing patterns – the most famous are the kite-and-dart shapes.

Types Of Symmetry In A Plane

The symmetry of geometric patterns is seen in the repetitive repeats of the original shape repeated in the completed tessellation. Escher described four ways to move a motif to another position in the pattern creating different types of symmetry.

A reflection tessellation flips the shape to the left, right, top, or bottom; it can also flip at an angle. If you draw a line down the middle of this “simple” tessellation, the two parts are symmetrical images, mirroring the other.

A rotation tesselation turns or spins the shape around in a circular way around the fixed central point. Rotations have a center and an angle of rotation.

Instructions On How To Make A Tessellation: Projects For Kids

Middle school-aged students can create striking tessellations at home, an art lesson at school, or a math lesson using the tessellation technique. This introduction to tessellations describes three ways to create unique tessellations that are great projects for kids.

Tessellation For Young Kids And Beginners

These beginner tessellation activities are easy; they don’t even need a tessellation tutorial; no cutting is necessary. That makes this one of the best projects for kids- even young ones.

Beginners and children starting to use scissors will quickly master the 1-step cutting method; it is slightly more challenging than the no-cutting method. Teachers can assign exciting projects for kids in middle school using this technique.

This 2D tessellation technique is for the more adventurous students or kids looking for a challenge. The method adds an extra step to the 1-cut technique.

You can copy and compile various finished tessellations to create coloring pages for more coloring fun. For inspiration, here are some cool ideas:

For more fun activities, here are some great tessellation toys for kids:

Examples of Regular and Semi-regular Tessellations:

Tessellations are everywhere, in nature, and made by humans. Some great projects for kids in your classroom begin by having students identify tessellation in the world around them. Here are some make your own tessellation examples to get you started:

Tessellation patterns occur in art, architecture, and various types of tiling puzzles ranging from traditional jigsaw puzzles to modern puzzles based on mathematics.

What Are The Math Rules For Regular Tessellations?

The study of tessellations shows the integral part it plays in mathematics. No matter your math skills, all students can make tessellations; it’s a fun way to inspire math activities. Here are a few examples of tessellations used for math exercises:

Where do you see tessellations in everyday life? Have you made a tessellation? What is your favorite shape?