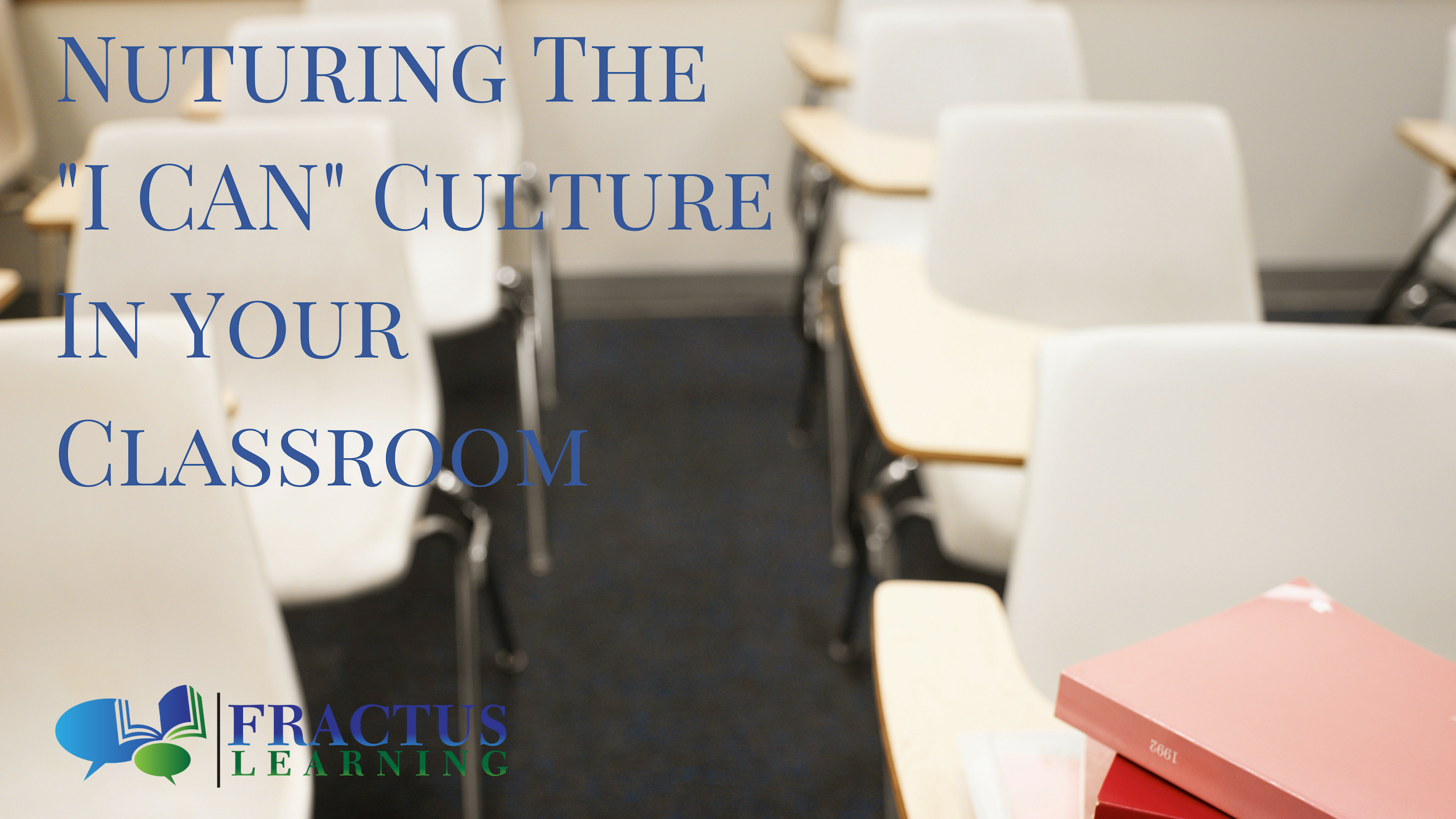 Failure is the secret to success; it can also be the confirmation of disappointment and of not being able to make it. How you look at failure determines the outcome. Fear of failure cripples the student but by making room for failure creates the “I CAN” culture.

The common definition of failure is lack of success, the neglect or omission of an expected or required action.  While this is certainly a definition, it’s only ONE definition.

There is the flip side of looking at the meaning of failure.

How can teachers create an atmosphere where students are prepared to take a risk? Where they aren’t afraid to fail but sees failure as an opportunity for success?

All newborns are unique, but they have one attitude in common—they are risk-takers. From the first breath, a baby begins to take risks; it’s the way they develop and explore the world. One example: to develop motor skills an infant needs to grab at the object, start crawling to explore, falling…walking. To them, it’s natural to take a risk, to “fail,” and to try again until they accomplish their goal.

Parents and adults are their greatest supporters. They cheer the infant on to get up and try again. There’s tremendous applause when the baby wobbles on unsteady feet into mommy or daddy’s arms. As they grow older, the child’s risk-taking decreases and fear of failure increases because they’ve become conscious of the negative reaction of the social environment if they don’t succeed.

When teachers create an atmosphere of ”it’s safe to take a risk and fail, just get up and try again,” they motivate students to continue to try until they get it right. By rewarding not just the result but the process too, a safe atmosphere is presented to the student. Now the student is prepared to take a risk and for example, put up their hands to answer a question, because it’s “safe.” Classmates won’t laugh at a wrong answer because the teacher won’t react negatively toward the child. 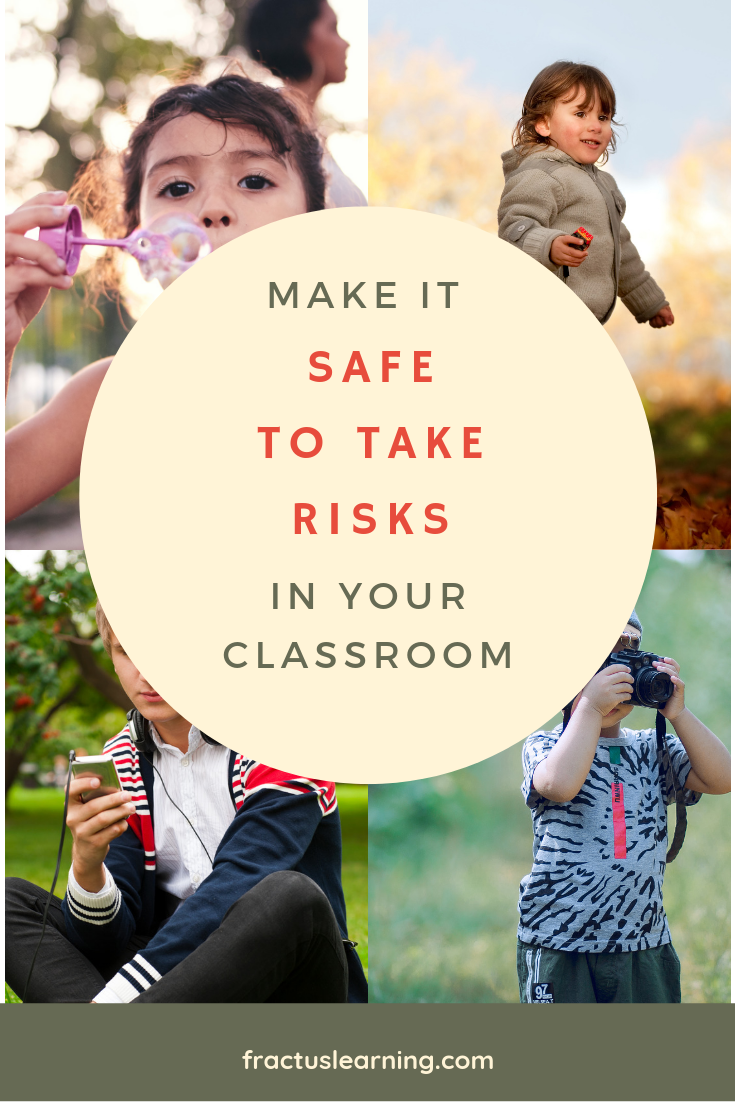 Children follow the example of the adults and older brothers and sisters. In the classroom, the teacher’s example sets the tone. One way of creating an atmosphere of taking risk and learning is to set an example by taking risks.

Instead of the routine lesson process, the students are used to, introduce a new element into the lesson or shuffle the lesson routine around. Presenting a lesson in a different order demonstrates to the students there are more than one way to get the same result.

Another way is to show mistakes. Teachers like Topher Kandic predict the end of the story and often gets it wrong. It demonstrates to the class that you can make a mistake and it is okay. Another teacher demonstrated to the class how bad he was at hacky sack (aka freestyle footbag). Then he asked a student, who he knew was good at it, to demonstrate to the class how they did it. The teacher then used the exercise to ask the student questions about how he became so good at hacky sack—whether it happened overnight or whether he had to practice.

A growth mindset teaches students that with the effort they can improve; they can increase their abilities, talents and intelligence levels. The opposite is a fixed mindset. A student with a fixed mindset believes that their current abilities determine and limit their level of success.

Students with a fixed mindset avoid situations where their weakness or incompetence is displayed. To them, a mistake is a failure. The growth mindset student, however, believes they can learn how to do something that they are unable to do at present. They have an “I can improve or learn how to if I practice” attitude.

Stimulate a growth mindset in the classroom will cultivate an “I CAN” attitude.

It’s safe to listen to the teacher and to watch a demonstration. It’s something else to try it yourself. Encourage ownership in students by teaching them to trust in their ability. When a student realizes that they can complete the task with their understanding and skill, they take ownership.

In an “I CAN” culture, not getting it right initially, will motivate the student to try again and again. The process of growing and getting closer to the solution becomes as important as reaching the goal. The student takes ownership of the assignment and not just the result.

Along with taking risks, babies are very curious too. They’ll stick anything in their mouths, touch, and grab without considering consequences. To them, it’s about satisfying their curiosity. When toddlers start to walk, the combination of being able to move and the curiosity to discover their environment opens a new world to them. Can or can’t isn’t part of their mindset.

Creativity kicks in with the crayon drawings on walls and scribblings that nobody understands but is proudly displayed at family gatherings. At some stage, children learn the word “No” and their life changes. Now everything isn’t cute and okay anymore. There are rules to follow.

Slowly curiosity, creativity, and innovation are dampened to fit into what is appropriate. Freedom to discover and to express themselves are curbed. The no becomes a mindset of “I can’t.”

By stimulating the student’s curiosity, creativity and innovation will remind them that they can. Remove limitations on projects and allow the students to be creative and to become curious again. For example, have them choose their own topic for an essay or don’t give them a restricted number of words but let them write as much as they can about a given topic.

To prepare children for the grownup world, they need to understand cause and effect. That there are consequences to what they do or say or don’t do. In a safe environment, the student learns that even the consequences of mistakes can have a positive outcome.

The teacher’s attitude towards the mistake and the resulting consequences the student must bare can influence how the student will react the next time in a similar situation. Removing the consequence won’t help the student. Sometimes the child needs to feel the pain and disappointment of his actions. Although the child made a mistake, the teacher should support the child and not be angry or condemning. Help the child to reflect on how to approach the same situation differently next time.

By supporting the child and not reacting negatively, the teacher helps the child to try again confidently. Instead of fearing failure, the child feels safe to take a risk and try again with a different approach. Without shattering the student’s confidence, they learn to suffer the consequences of their deeds and to overcome the obstacle.

A growth mindset and “I CAN” attitude may help the student to accomplish what they normally wouldn’t have. It gives them the desire to improve and not give up before they even tried. By teaching the children to set challenging goals they can accomplish, will help them achieve things they thought were impossible.