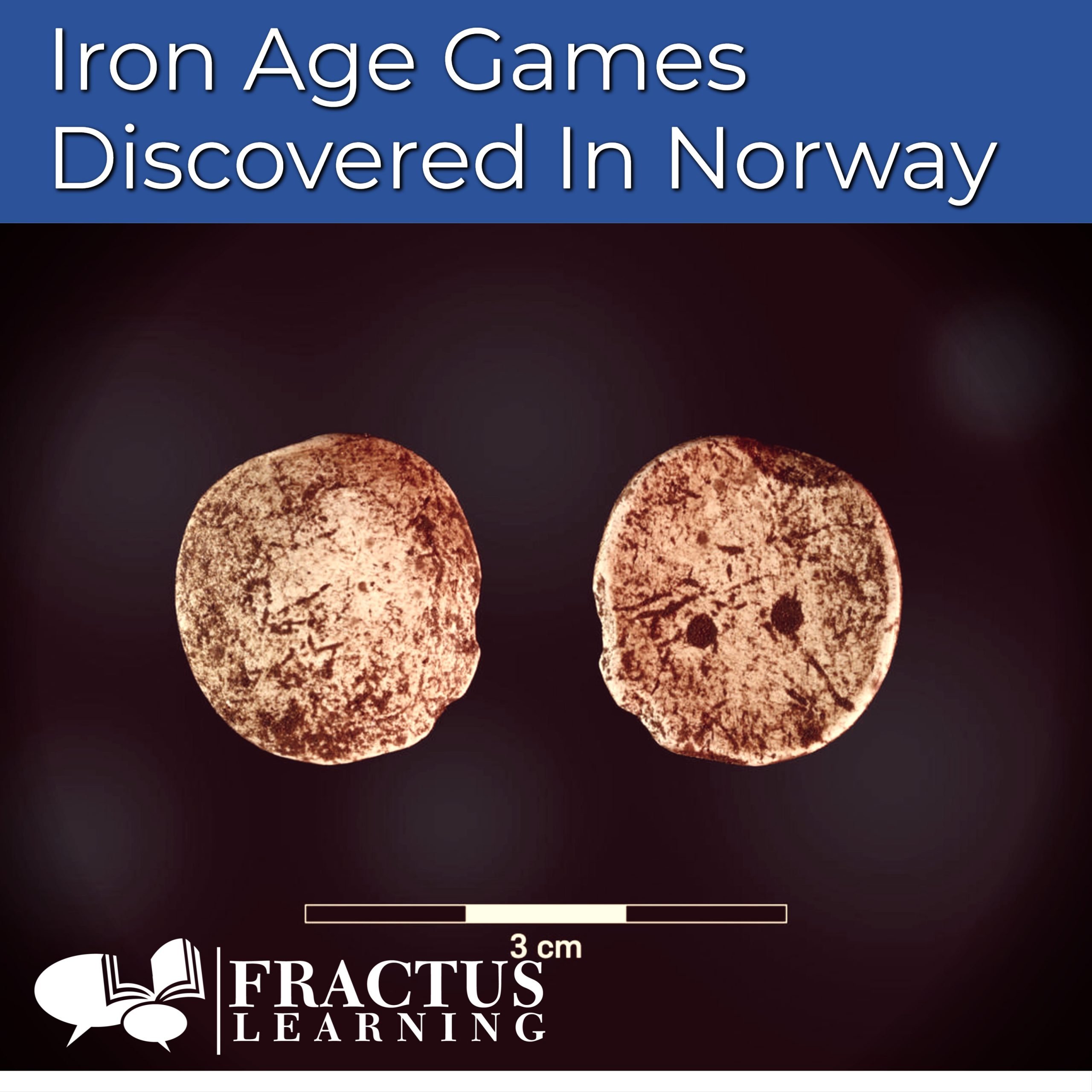 It’s hard to believe, but we now have proof of the types of board games and other fun games people in ancient times played to keep busy. An incredibly fascinating find!

Archeologists discovered at a cremation patch in Western Norway two thousand years old Roman Iron Age board-game pieces and an elongated die, a very rare type of dice. Such discoveries have only occurred a few times in Norway or Scandinavia. Here’s what happened.

On April 2020, Norwegian archeologists from the University of Bergen was excavating a small Ytre Fosse grave cairn when they unearthed among a bronze pin, three ceramic pots, and burnt glass, almost the whole set with dice – 18 gaming pieces (13 whole and five broken game chips) and the elongated dice exclusive to the Roman Iron Age period, AD 1-400. The die had circumpunct markings (an ancient symbol representing a circle with a dot; see below) with numerical values zero, three, four, and five. Archeologists found similar dice games at the famous Vimose weapon-offering site at Fyn in Denmark.

The decorated pottery, bone shards, and scorched glass indicated the person cremated and buried was a member of the upper class. The gaming pieces were status objects that revealed people who played the board game must have been local aristocracy or influential people with status. “The game showed that you had the time, profits, and ability to think strategically,” said Morten Ramstad.

Archaeologist Louise Bjerre told Life In Norway, “This excavation connects Norway to a larger network of communication and trade in Scandinavia.” The site overlooked the nearby Alverstraumen Straight, which was essential to the ancient sea route Nordvegen (the Northern Way) between south and north Norway.

The game pieces will go to the University lab for preservation and perhaps in time be exhibited in the Bergen University Museum for public view.

What Games Did They Play In The Iron Age?

The discovery forms part of the type of games that were the predecessors of the famous Viking Age board game Hefatafl. Classic game pieces found on the island Lindisfarne indicated that Vikings must’ve traveled with these types of board games. Tafl games played on checkered or lattice gameboards form part of a family of strategic board games.

The gaming board, discovered at the bog Vimose weapon-offering site at Fyn in Denmark in 1850-1860, was inspired by the Roman game Ludus latrunculorum played by the upper class in Roman Iron Age Scandinavia. The discovery gave a unique insight into the type of games Germanic tribes in Scandinavia enjoyed playing; it also provided a glimpse into the soldiers’ everyday life and what they did for recreation. One wonders if these were also board games for kids.

Also known as latrones, latrunculi, the game of brigands, or the game of soldiers, this two-player Roman Empire strategy board game resembled modern draughts or chess. The game Latrones is believed to be an earlier variant of Greek board games known as Petteia (Pente Grammi, Poleis, Pessoi) that were played in Homer’s time. In Plato’s Republic, a Socratic dialogue, author Plato referred to Socrates’ opponents as bad Petteia players.

British archeological evidence from Celtic burials and settlements in the British Isles proves gambling and these types of games were common among the Celtic tribes across the continent. The board game piece dates back to the first Viking raids and plundering of the monastery on the island of Lindisfarne. Celtic settlements’ discoveries include the bone dice at Naintre and Acy-Romance in France and bone dice from a sanctuary in Roseldorf, Lower Austria.

The Ytre Fosse excavation in Western Norway will contribute more precise data of gaming pieces and dice in Early Iron Age Norway. It gives us a glimpse into the social impact and significance games had in that era and, at the same time helping archeologists learn about the chronology and beginning of the Iron Age in Norway. The gaming pieces show that people played games in the Roman Iron Age, the Viking Age and are still enjoying board games today despite all the modern technology.

It will be wonderfully exciting for the public to view this incredible find along with the rest of the treasures at the Bergen University Museum.