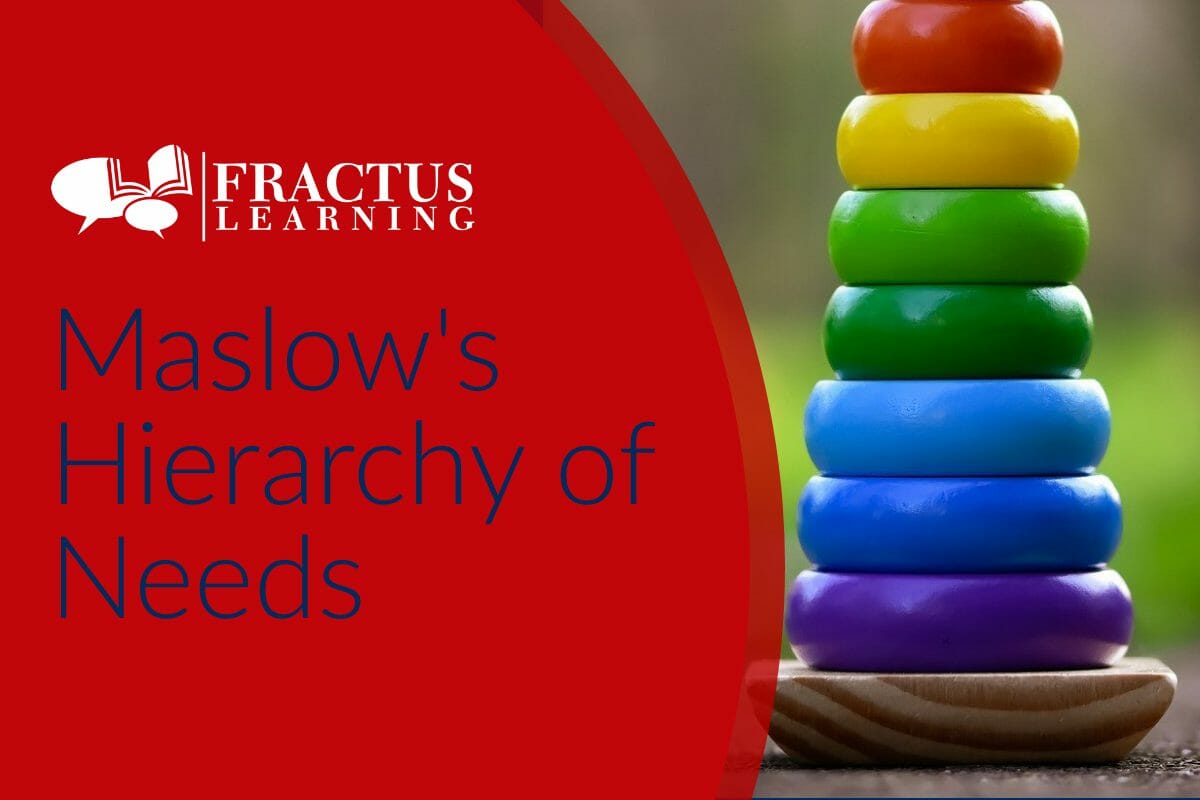 The name Abraham Maslow is one of the first names that come to mind when discussing what motivates human behavior. Maslow’s hierarchy of needs was introduced over 70 years ago. He published the article “A Theory of Human Motivation” in the Psychological Review in 1943.

Quick Explanation of the Theory

Maslow was a humanist psychologist and believed that human beings have an intense desire to achieve happiness by achieving ultimate self-actualization. Maslow’s Hierarchy of Needs theory consists of five categories representing needs people have at various levels. His theory of motivation is described in a pyramid structure. The lowest or base needs form the foot of the pyramid, and the highest needs the top of the pyramid.

According to Abraham Maslow, people will first satisfy their physiological needs, the basic needs before moving up the pyramid to the next level of needs. The five levels of needs, from bottom to the top, are physiological needs, security and safety needs, social needs, esteem needs, and self-actualization needs.

The phrase “Maslow Before Bloom” relates to how and where a student is in the development of Maslow’s hierarchy of needs affects their ability to move up Bloom’s taxonomy.

Maslow differentiated between deficiency needs, the first four levels (physiological, security-safety, social, and esteem) and the highest need level of self-actualization, which he deemed a growth need.

Deficiency needs occur when needs in levels 1-4 aren’t met. It creates a desire to satisfy the need, which increases the longer the need is unmet. When the demand is met, the urge goes away. A classic example is a physiological need like food. The longer a person doesn’t eat, the hungrier they become. Think of how you feel when you’ve missed a meal. Your hunger increases until you can’t focus on anything else. After you’ve eaten, you’re no longer hungry, the desire to eat disappears, and you can concentrate on other things again.

Although a deficiency need requires fulfillment, it doesn’t require 100% satisfaction for a person to move onto the next level.

A deficiency need occurs due to a lack, and the motivation for the need decreases when the shortage is satisfied. A growth need, however, functions in the opposite direction. A person’s desire to grow and improve increases, the more they grow. A growth need doesn’t occur because of deficiency, but from a desire to grow and develop themselves. The more a person becomes, the higher the motivation to improve more. 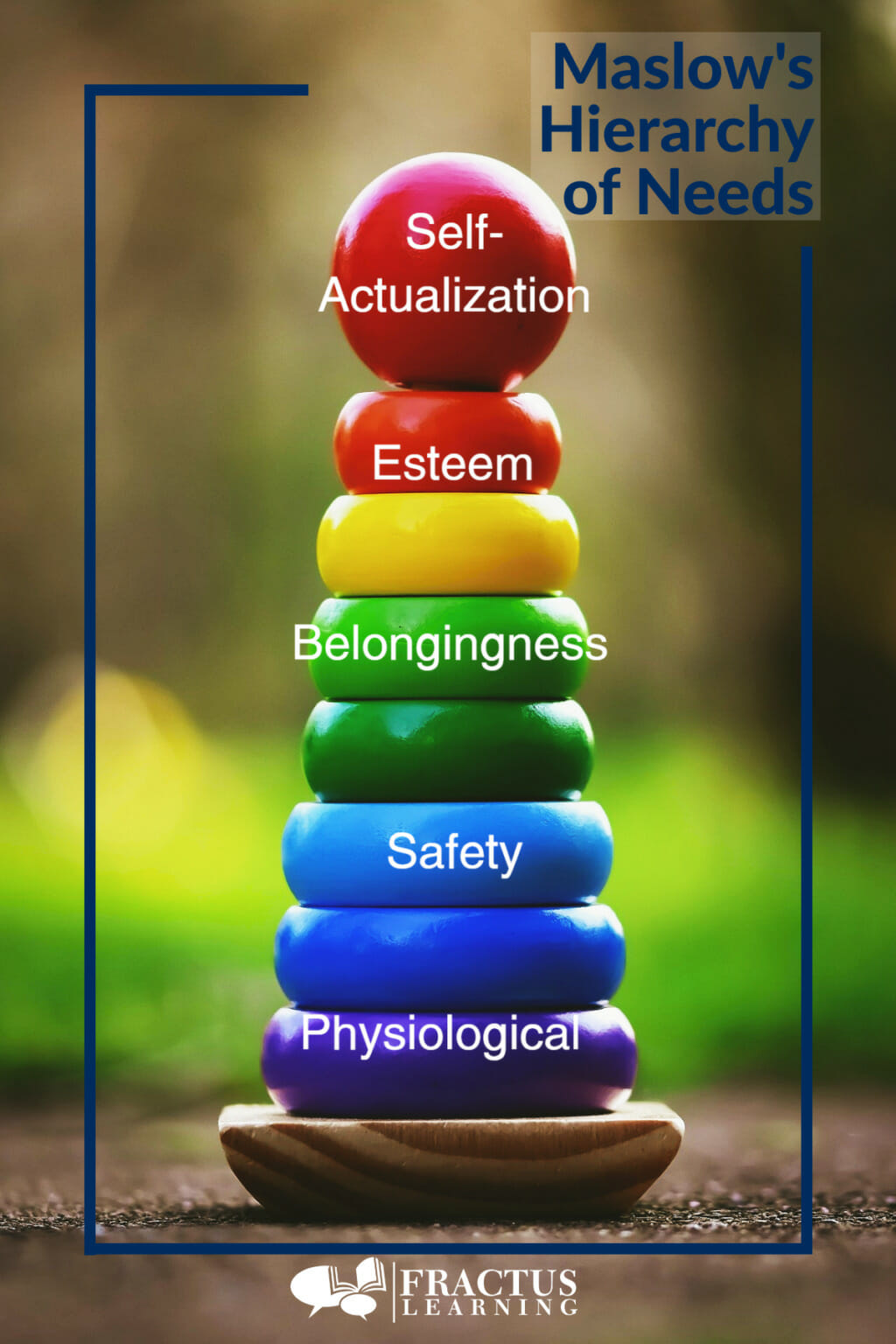 What Are Physiological Needs

Physiological needs are the most basic human needs like air to breathe, food to eat, water to drink, sleep to rest, and regulation of body temperature at 98.6 degrees Fahrenheit (37 degrees Celsius) to ensure proper homeostasis. These needs are based on biological needs that are essential for the survival of the human body. Shelter, clothing, and propagation of humanity are also part of the foundational needs in this model.

Maslow believed that all other needs become secondary if your basic physiological needs aren’t met. He thought a person couldn’t function at their best if these biological needs weren’t satisfied.

What Are Security and Safety Needs

When the basic physiological needs are met, the second level of basic needs is addressed. A person now requires the gratification of security and safety needs. As a person moves up a level, the requirements become more complex.

To adults, safety and security needs include financial security, job security, law and order, social stability, health and wellness, and safeguarding against injuries and accidents. For children, it may be feeling safe in their environment and predictability.

Safety and security become essential when wars, natural disasters, and crises disrupt the world they know. People feel safe and secure when they can control their environments and situations that may occur.

What Are Social Needs

When the two basic levels are met, people now require social needs. They want to belong and have relationships, where they are loved, accepted, experience affection, and companionship. People want to be loved, and they also wish to experience love toward others.

Social needs drive the desire for emotional relationships with family, friends, and partners. They want to be members of social groups, communities, churches, religious organizations, sports teams, book clubs, and other societies.

What Are Esteem Needs

A person whose esteem needs are met feels good about themselves. They have self-confidence and self-worth that motivate them to independence, achieving their objectives, and master skills. People with low self-esteem don’t have the confidence to achieve what they are capable of because they don’t think they can or are worthy.

The second factor that influences esteem needs is how people show respect towards a person, and their acknowledgment of the person’s accomplishments and contributions to society. They want to feel valued. To receive the required status, appreciation, recognition, and respect, a person may excel academically, take part in sports, professional activities, or personal hobbies.

What Are Self-Actualization Needs

Self-actualization is the highest level in Maslow’s hierarchy of needs. According to Maslow, only a few achieve this level. Most people fluctuate between the physiological and psychological levels and seldom reach or achieve complete self-actualization.

At this level, a person strives to become everything they are adept at becoming. It is where a person maximizes their potential, talents, capabilities, and skills to such an extent that they become self-fulfilled. In contrast to the social and esteem needs, a self-actualized person cares less about what others think of them. They are self-aware and desire to fulfill their destiny.

Each person may define reaching their full potential differently. For one person, it may be creating their art masterpiece; for another, it is to be the best partner or parent, and for others, it could be accomplishing academic or sports achievements.

Why is Maslow’s Hierarchy of Needs Important?

Despite the criticism of Maslow’s hierarchy of needs, the model does have a role to play today. Perhaps the appeal is in its reflection of the growth of a child. As a baby, the basic needs are the most important, but as a child grows older, their desires and needs change. The hierarchy of needs is a model that a person can use for self-improvement.

The simplicity of the pyramid model gives people perspective. For example, lack of sleep and poor eating habits affects how you perform at school or work. It is difficult to focus if you’re hungry or cold. Stress and emotional upheavals have a psychological and physical impact on a person.

His hierarchy causes people to stop and think about what truly motivates them. What is essential and essential to them, and what do they want to accomplish? It helps to set goals by considering what is lacking and what a person wants to achieve.

Although the levels aren’t rigid, it does indicate to a person what their motivational hierarchy may be. Someone may deem fulfilling their esteem needs more important than loving and belonging. For another person, social needs are more critical than the esteem needs.

When you know what motivates you, it helps set goals to achieve your dreams and purpose. A person is more likely to achieve goals that motivate them than goals that they think they need to make.

Another benefit of the Maslow hierarchy is the focus on having priorities and being well-balanced too. Focusing on one group of needs may result in neglecting other vital areas in a person’s life. The hierarchy reminds a person that all the needs play a role in our daily lives.

Does the Theory Hold up to Testing?

Abraham Maslow was more interested in positive outcomes of people fulfilling their potential than psychological problems people may have. His humanistic approach focused more on the subjective experience of the individual and their understanding of the world than an objective scientific testing approach.

His hierarchy model has been criticized for various reasons.

Maslow’s biographical analysis of famous people whom he considered had reached self-actualization was scientifically seen as a subjective, bias analysis.

According to Maslow’s theory, if a person’s basic physiological needs aren’t met, they can’t genuinely function on the higher hierarchy levels.

Famous artists like Vincent van Gogh and William Blake created masterpieces while living in poverty. Franz Schubert composed music that wasn’t popular for the audience of his age. His financial difficulties forced him into a nomadic lifestyle.

Matthew Brady, the father of photojournalism who is known for his American Civil War photos, died in poverty and alcoholism. He became famous with the portrait of Abraham Lincoln on the five-dollar bill. After the war, he couldn’t sell his photographs because nobody wanted to buy reminders of the war.

Countries whose people live in poverty like India, South Sudan, Mali, Liberia, and Nigeria also contradict the fixed hierarchy model. Despite the lack of basic needs, the people in these countries do satisfy needs like love and belonging, which are higher needs than the basic biological needs.

A survey found that the order of Maslow’s hierarchy of needs isn’t fixed and that people move between the various levels simultaneously. Louis Tay and Ed Diener conducted a survey from 2005 to 2010 on 60,865 participants representing 123 countries. Participants answered questions about the multiple levels of Maslow’s hierarchy model. The purpose of the study was to examine the association between need fulfillment and subjective well-being.

They found that unmet physiological needs may receive the most attention, but people do meet other needs despite the lack of these basic needs. Meeting social needs and esteem needs, for example, had a positive impact on people’s lives even during the absence of basic needs. Although there was an order, the various levels could function independently from lower-level needs.

Other researchers have expanded Maslow’s original hierarchy of five levels to eight levels. The order of the four deficiency needs levels stayed the same, but three additional levels were added to the growth-needs.

Maslow’s Hierarchy and Motivation Model in the Classroom

The application may seem obvious, but Maslow’s Hierarchy is an excellent guide for teachers in helping students. One of the primary applications is that a hungry, tired, or cold student can’t concentrate in the classroom. Before a teacher can focus on satisfying a child’s cognitive needs, their basic physiological needs should be met.

A child who feels safe and secure in a classroom environment may actively engage in classroom activities. A student who doesn’t feel safe, could drawback, and make unnecessary mistakes due to anxiety and fear. A teacher can help these students to provide a safe environment for them.

By acknowledging and accepting students, teachers may help to satisfy a student’s need to belong and acceptances by others. Positive and motivational responses could improve a child’s self-confidence and a belief in their ability.

Educators have the responsibility and opportunity to help children develop through their emotional stages.