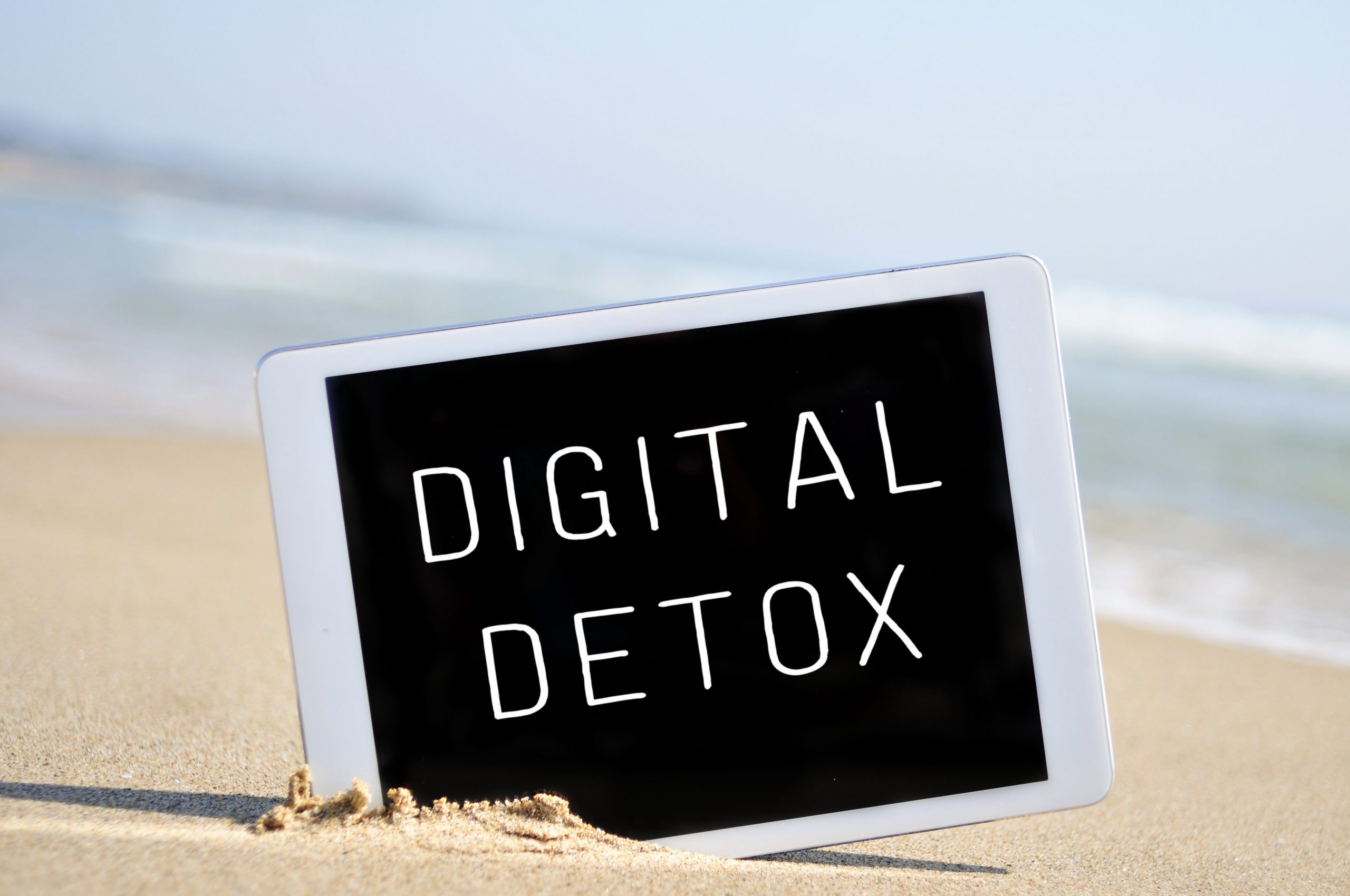 While I am a big fan of using technology as a tool for learning, we as parents and educators need to help our children learn how to maintain control.

Here’s the sad truth: Most children today are controlled by their technology, not the other way around.

Deep down, we all know it is a problem.  Yet either because it’s easier to ignore or we don’t know what to do, we just keep-on, keeping on and hope for the best with our children.

My home is no different.  It’s a constant struggle to not only set boundaries on smart phone and video game usage, but enforce them.  It’s made harder by my own habits: I’d rather read on my Kindle or play a game of Rimworld than plunk down in front of the TV.

My children then hear me preaching about the dangers of overdoing screen-time, and then watch me later proceed to disappear into whatever electronic fantasy world I’ve picked that evening.  My youngest son might not be able to spell the word ‘hypocrite’, but I think he’d get an A in school if he had to give an example.

Yes, I’ve been failing as a parent in this regard.   As Christmas approaches, I’m checking off items I buy on gift lists to show my family how much I love and care for them.  Yet I sit, ignore – and sometimes enable – harmful behavior.   Well, no more! It’s time for a change – for my children’s sake.

In my research, I’ve found there are steps you can take to help your children set boundries and regain control.  I’ve got a list of tips that I plan on using as I introduce some screen-sanity back into my home.  Hopefully they are helpful for you.

What is the problem with too much screen time?

There aren’t many times in history where there has been as dramatic an effect on behavior in such a short amount of time.  When TV hit the scene, the adoption was gradual.  I know this might hard for some of you to believe, but around the world most TV stations actually stopped broadcasting overnight – all the way into the mid-1980’s.  There was no always-on media.

What this means is the exponential adoption of smart phones really is unprecedented.  We’ve only recently been able to tally up the effects of constant device use on our children.  As the evidence piles up, it’s becoming clear we hurt our children if we give them free reign with their devices.

I’ve only included a few research pieces in this article, but there are plenty more available on the web. Here’s just a smattering of research and some steps you can take to help your child:

Reducing The Effect on Sleep:

A 2015 study of over 2000 4th and 7th graders found not only did kids with a smart phone in their room sleep on average 20 mins a day less, but they were also nearly 40% more likely to rate themselves as not having gotten enough sleep (compared to kids without nighttime phone access).  A television in the bedroom didn’t have the same effect on quality of sleep.

There are numerous studies (along with common sense) that indicate tired students do worse in school than refreshed ones. Here’s one.

Solution: Time to put on the big-boy pants and take away your child’s phone at bedtime.  I know, just reading that phrase conjures up images of the wailing and gnashing-of-teeth one will need to endure, but you can make the transition easier.

Get your kid an clock-radio alarm clock if they claim they need a phone for the alarm.  If you really want to get ahead of their objections, buy them an music-streaming alarm clock like the Vobot.  That particular device has all the music, alarm and clock features of the cellphone without any of the distracting social-media push notifications or iFunny memes.

When your children continue to complain, remind them you are only removing the distraction from them while they are supposed to be asleep.   Help them reflect on how that reasonable request – and their reaction to it – shows they might be controlled by their phone, and not the other way around.


Help Them Learn How To Regain Control of Their Day:

A survey in 2010 by the Kaiser Family Foundation found that you aren’t imagining it – your child is always on a device or two at the same time.  Kids packed nearly eleven hours a day of media time into the seven-and-a-half hours daily spent consuming it.

And that was in 2010.  I’m willing to bet that number hasn’t gotten better in the past 7 years.

This is a double-whammy of bad.  Beyond the sheer raw amount of time taken up by device-watching, it’s a sign of our kids multi-tasking while doing other important activities.  A study by UConn in 2015 showed even “pro” multitaskers tend to be worse students than those who avoid doing so during studying.

Solution: Help your child learn boundaries.  I have been decent at this in my family, primarily because of an app named Dinner Time.  It allows parents to control phone usage.  At the most basic level, a parent can hit a button and shut off all access.  Sometimes that’s needed – like when a child refuses to stop looking at their phone at the dinner table.

It’s more helpful though in setting restrictions and letting kids choose how to allocate their time. My kids have a phone budget for social apps and browsing.  They know the amount – and once they blow through it, they are shut out of all the social apps until the morning.  It’s a pretty quick feedback mechanism – and it only takes one interrupted social session to start modifying behavior.

They can use Google Music (I’m not heartless) and use the phone without any time limits.  That way I can still reach my child if I need to – the original reasons we bought the phone in the first place.

One cause of screen addiction – for all ages – is FOMO.  The Fear of Missing Out causes users to constantly loop in their head that they need to check “if anything important” has been posted, tweeted or chatted.

One example: Two-thirds of cell phone (owners of all ages) said in a Pew survey that they “find themselves checking their phone for messages, alerts, or calls — even when they don’t notice their phone ringing or vibrating.”  Almost 3 in 10 respondents couldn’t imagine living without their device.

Solution: Unplugging will help with that problem. It will likely help you as a parent too. It’s simple to do – get a bag, put ALL your portable devices inside, and hide the bag away for the day.  Replace the time wasted on the phone by getting to know your family again.

When you lock up your devices for the day, you shatter the self-built fear-facade that “OMG, the world will end” if you remove yourself from the information firehose for a day.  If you as a parent use this time to hang out and do something with your child, you help reinforce that “IRL” relationships are more important that your Klout Score.

The National Day of Unplugging has oodles of resources to help you on your internet holiday.  I particularly like the graphics letting your followers know you’re tapping out for the day: 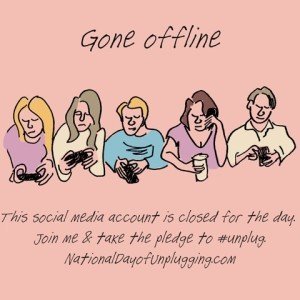 Talk To Other Parents

The School District Superintendent where I live in sends out a weekly video blurb to all parents.  I think it’s a nice way to keep on top of what’s going on this week.  It just so happened that after I finished writing this article today’s video alerted me that they will be holding a public screening of a documentary called Screenagers.

This documentary appears to be a good tool for opening discussion about the issue of screen time for our children.  Part of the solution is learning from and helping other parents in your community.  If other parents around you are implementing controls you’ll have a response to the “everyone else can do it” refrain from your child.

There are showings scheduled around the country. You can’t rent it on your own – the creator wants to have a group of parents come together so you can see that every parent is grappling with this issue.    If you can’t attend there are additional resources available on the Screenager website.

As I said earlier, I’m about to embark on this journey myself.  I’ll update this article to reflect how it’s going every few months. If you’d like to join along, post your plan in the comments and use #Unplug2018 on Twitter when updating.  Good luck!