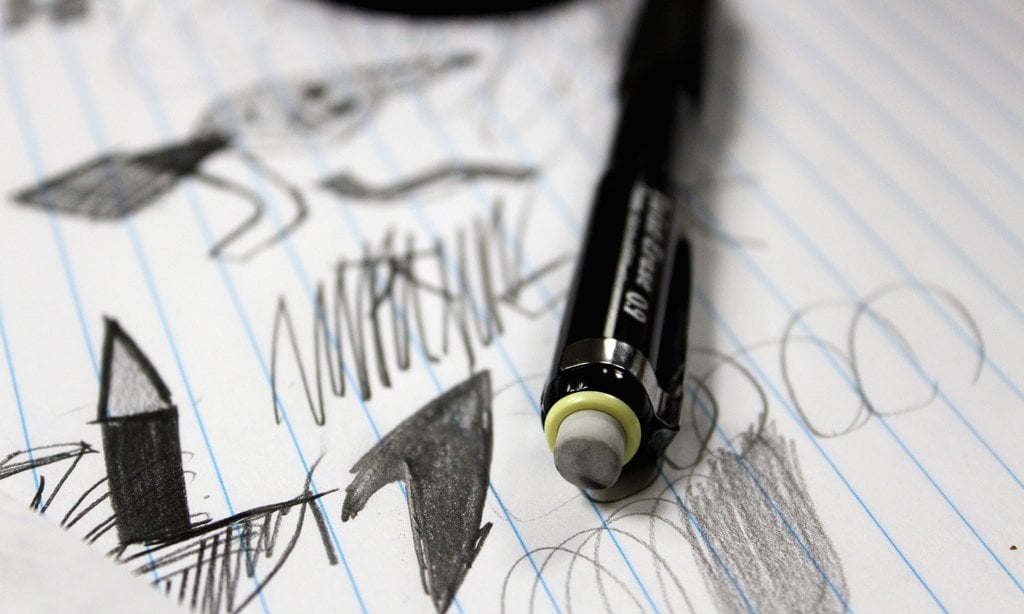 To the annoyance of many teachers, students cannot help but doodle in class. A range of studies now shows that this displeasure is misplaced: the doodles seem to help people concentrate (by preventing them from completely falling into a daydream) and consolidate information. Also, it seems that leaders of all types have doodled for as long as pen and paper have been available. The photograph below is of John F. Kennedy’s doodles during the Cuban Missile Crisis.

In point of fact, as demonstrated by cave paintings, drawing and human language developed hand in hand. Many written languages are based on “pictograms.” People even draw when they speak. Watch people’s gestures for a day; they are often drawing in the air.

A quick look at the copious quantities of artwork on the walls of almost any school shows that incorporating drawing into classroom work is not an original idea. But, these drawing assignments are often time consuming and done to give students a rest from “real” work. The frequency of drawing assignments decreases with age: you will rarely see calculus posters, for example, and almost never see drawings at university. (Later on in their working lives, however, almost every presentation comes with graphics.)

Here are several ideas for quick, effective, and engaging classroom drawing exercises that can be used in a range of topics by anyone regardless of drawing talent.

I had my algebra students estimate their heart rates for 24 hours and plot them on a Cartesian plane to internalize the meaning of slope. But line graphs do not have to be limited to math: witness Kurt Vonnegut describing the “shape of stories.” He developed this idea as a master’s student but it was rejected as a thesis. It went on to guide his literary career.

Kurt Vonnegut on the Shapes of Stories

Many professional biographers will start their interview process by having their subjects draw the floor plan to their childhood homes, which seems to open the floodgates of memory. You could easily have your students draw their homes, rooms, or neighborhoods (and then have them write). They could draw the floor plan of a house from a novel and trace the character’s movements. In history, they could illustrate important battles.

Simple magazine-style advertisements can be drawn quickly by anyone (weaker artists can rely on text); I have had students draw advertisements on tests. Distilling complex ideas in a memorable, persuasive format is excellent for learning. Examples: an ad summarizing Lincoln’s arguments in his debates with Douglas; an ad summarizing the importance of special relativity; an ad for Atticus Finch’s law practice.

Print a text with wide margins and have the students illustrate. This may sound childish but it has a glorious history: many famous authors, including Twain, Poe, Coleridge and Wilde, would draw and write all over the novels they read. Pierre de Fermat famously wrote his “last theorem” in the margins of a math text he was reading. Aristotle gave a copy of the Iliad, with his annotations, to Alexander the Great. It became Alexander’s most prized possession: he was buried with it.

Beyond simple illustrations of the reading, you can have your students invent a code for rereading: a star for a notable quote; a laughing face for a funny part, or symbols more specific to the particular book. Annotating and illuminating encourage deep reading and facilitate review.

One of NY Magazine’s most enduring features is its “approval matrix” which has a Cartesian plane with “highbrow/lowbrow” as the y-axis and “brilliant/despicable” as the x-axis. A matrix is an excellent tool for clarifying complex ideas. You could put economic attitudes on the y-axis and social attitudes on the x-axis and illustrate the differences between political parties and candidates. You could use it to sort out characters in a novel (integrity vs. luck, for example).

I hope these ideas help you tap into your student’s deep desire to draw.

Nick Kurian is the founder of Kurian Consulting. A former NYC public school teacher, he has three products that address the college readiness process: www.satgenius.com, www.rebeltoruler.com, www.masterandscholar.com. He also teaches Math, U.S. History, World History and Economics at the Professional Children’s School in Manhattan and blogs at www.rebeltoruler.com/blog.