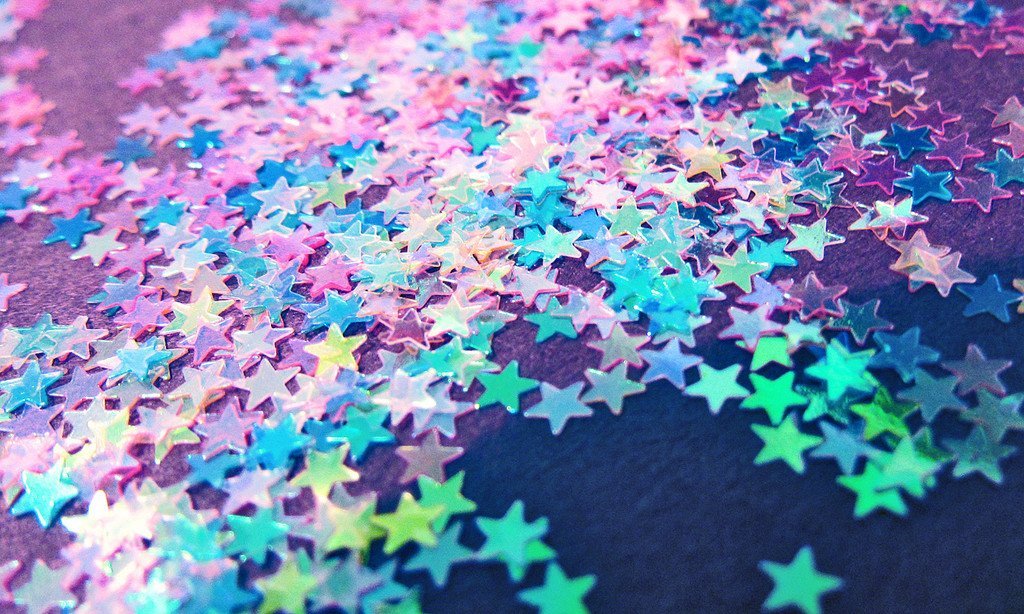 Glow in the dark stars aren’t exactly new technology. If you didn’t have them on your ceiling as a child, chances are you knew someone who did. They weren’t quite the same as having a real telescope for kids, but they do help to bring the night sky indoors.

Science and technology have made glow in the dark stars glow brighter, last longer, and MUCH easier to apply and remove. If you don’t want the trouble of applying star stickers to the ceiling or walls, there are some fantastic star projectors for kids bedrooms that will have a similar effect as well as some other cool features.

Consider applying glow in the dark stars with your child. They offer a great opportunity for children to learn about the stars and constellations. Kids can recreate constellations or create their own unique, imaginative designs using the stars. The possibilities are endless!

Glow In The Dark Stars Options 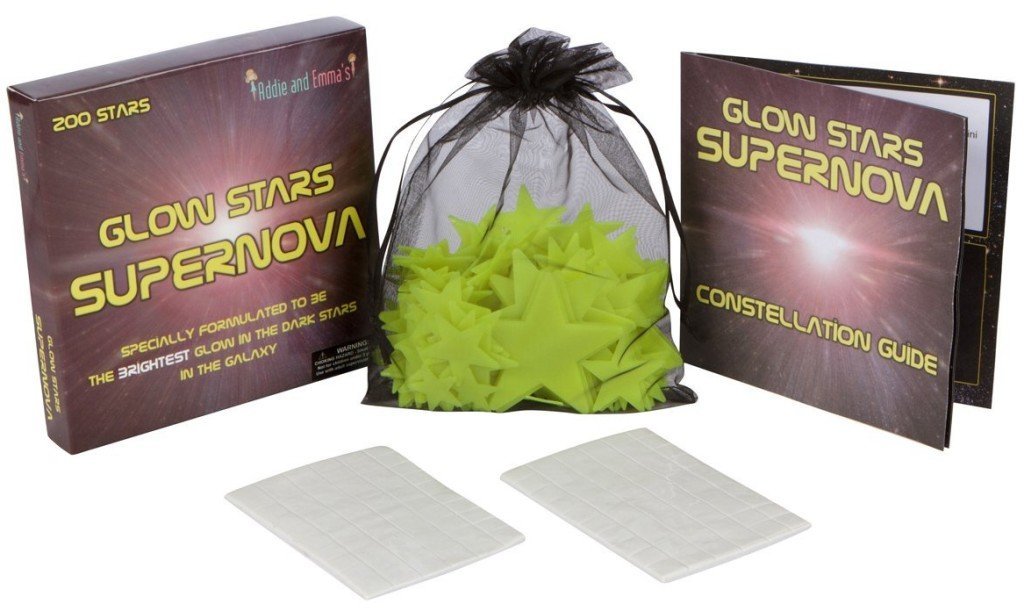 A unique glow formula makes Glow Stars Supernova – 200 of the Brightest Glow in the Dark Stars just what the advertise: “the brightest glow in the dark stars”. According to the manufacturer, these high quality adhesive stars glow brighter and last longer that other glow in the dark stars. They are made with Europium doped Strontium Aluminate (SrAl2O4:Eu.Dy.M), one of the brightest and longest lasting photoluminescent substances available. It’s also odorless, and biologically and chemically inert; this means it’s non-toxic and safe. Arrange the stars on the ceiling in a child’s bedroom with adhesive putty that allows the starts to be applied and removed easily. Use the full color guide as an idea of how to place the stars, or simply use it to teach your child about real stars.

2. Glow in the Dark Gift Set with Stars, Moons, Planets and Rocket Ships 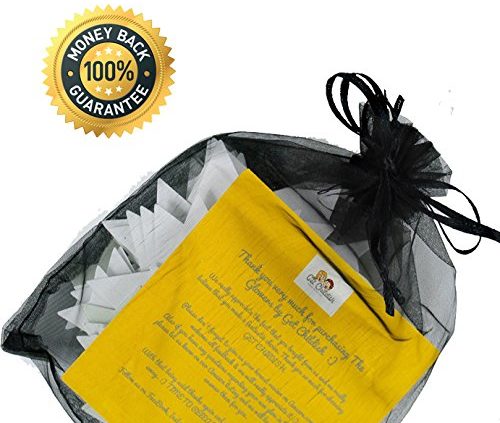 The Glow in the Dark Gift Set with Strong & Long Lasting Glowing Stars, Moons, Planets and Rocket Ships comes with 100 glow in the dark stickers. These glow in the dark stars also boast a bright and long-lasting glow. The glow powder on the surface of these stars is covered with a high quality plastic that allows the stars to absorb light quicker and more effectively. They already have a sticky glue applied to the back and can be applied then removed and re-applied easily, and are guaranteed to stay put and not fall off. 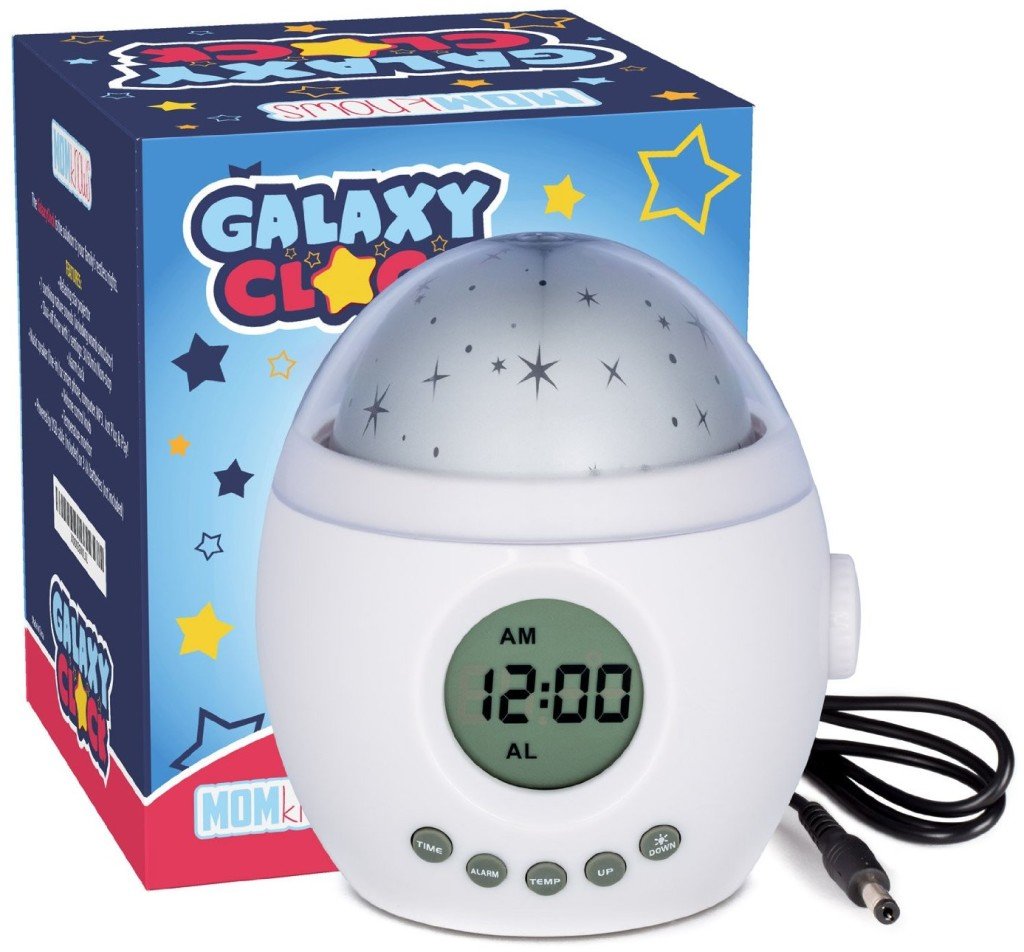 The Galaxy Clock by MomKnows – Soothing Night Sky Star Projector and Music Player is a fantastic way to display stars in your child’s bedroom at night time, without having to actually stick anything to the ceiling. It’s not just a simple star projector, though; it has lots of cool features. It projects several colors of light that can be cycled through, or you can choose a single color as a soothing nightlight. It’s also a white noise machine with seven different calming sounds including a Womb Simulator feature, which is scientifically proven to assist infants and young children fall asleep. A music speaker, alarm clock, and temperature monitor are included in this fun, useful star projector. 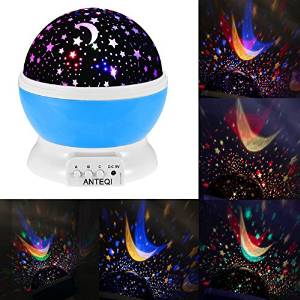 The Sun And Star Lighting Lamp projects stars and the moon and the ceiling of any dark room. There are three lighting choices: warm light, blue light, green light, and red light. It’s incredibly simple to choose your favorite with the buttons on the from of the projector. You can use the button to have the projector cycle through the colors and even have the lights turn, creating a mesmerizing light show. The star lamp is powered by four AAA batteries or plugged in with a USB cable. 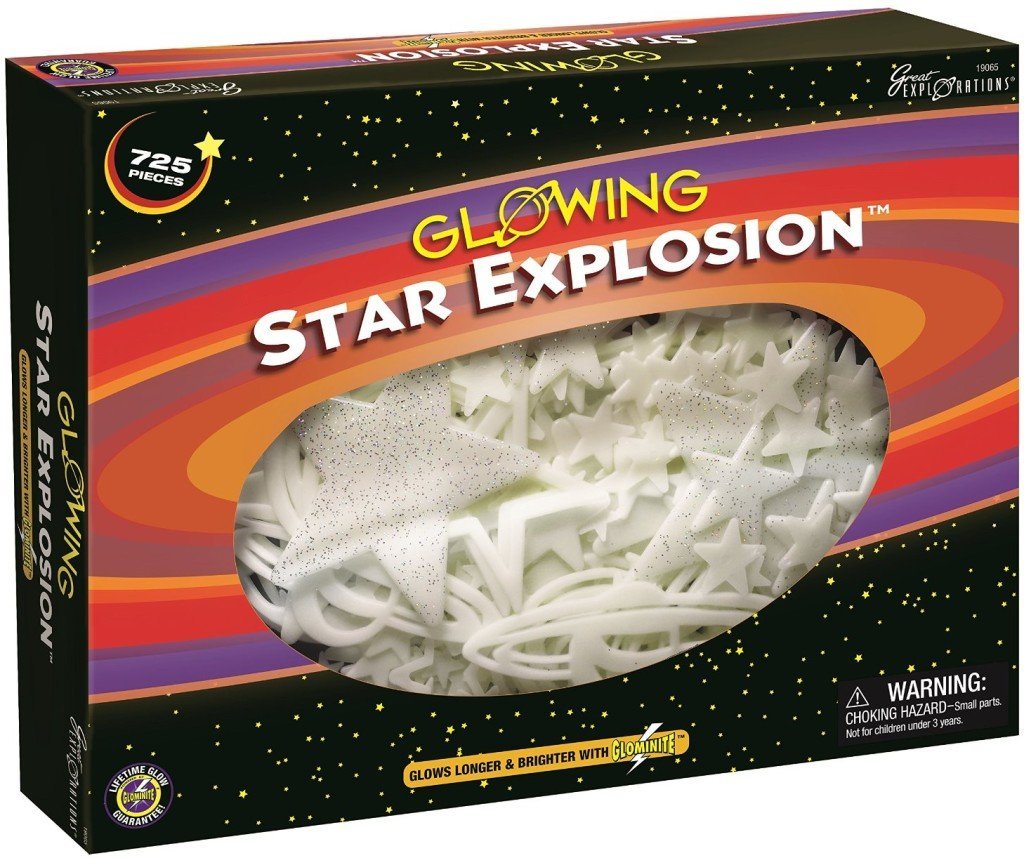 Decorate even large bedrooms with the Great Explorations Star Explosion. It has more that 700 adhesive stars, planets, comets, and spiral galaxies. Create your own starry landscape or use the included star map to create actual constellations. Completely safe Glominite formula charges itself when exposed to light. 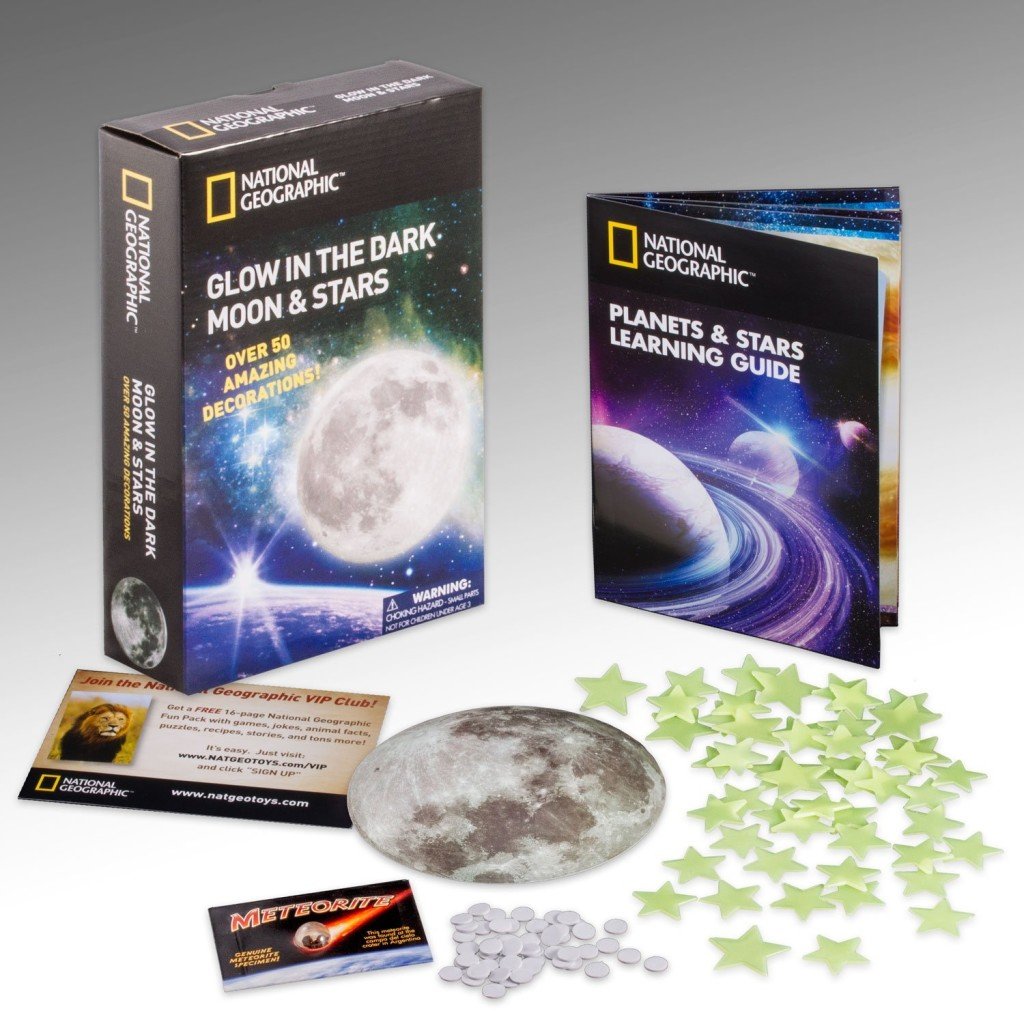 The National Geographic Glow in The Dark Moon and Stars Science Kit is a great way to learn about the stars and planets and then decorate using the 50 adhesive glow in the dark stars. The full color learning guide has cool facts about space and the kit even includes a genuine meteorite! The star stickers and moon sticker are easy to apply to and remove from the wall or ceiling. 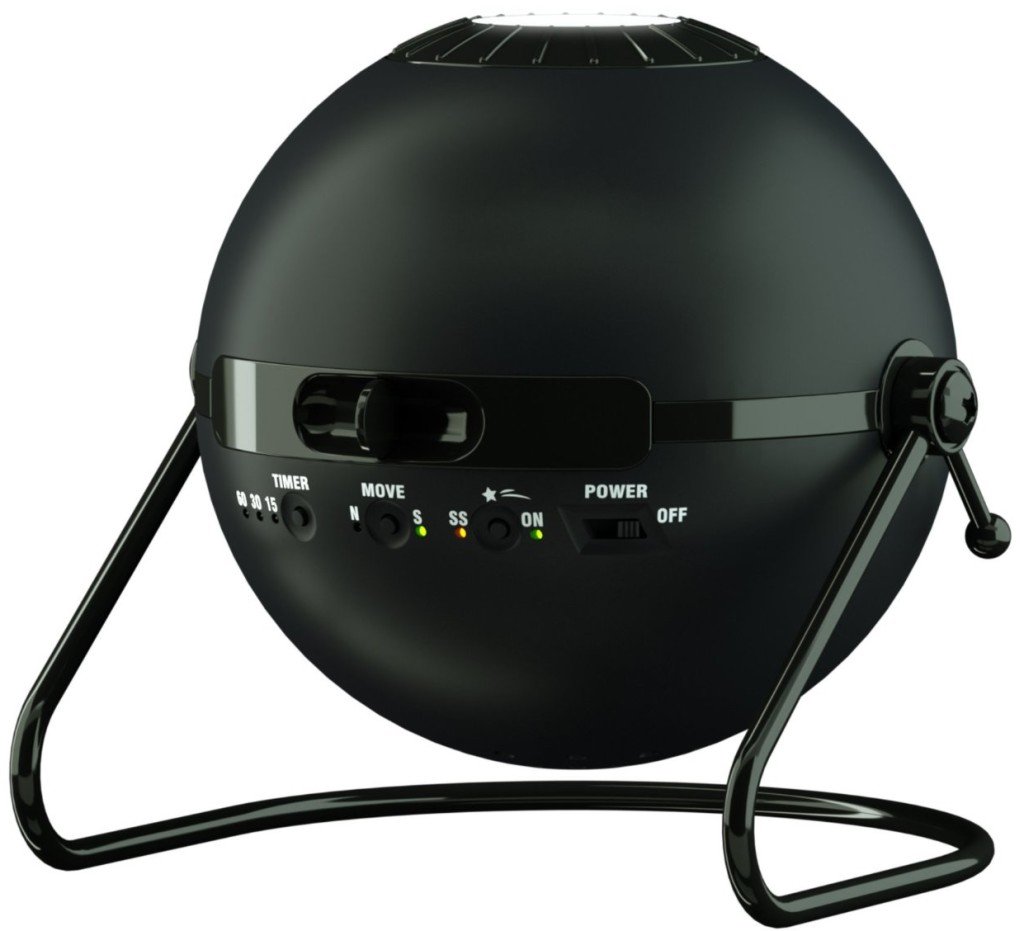 The entire family will love the Sega Homestar Original Black – Home Planetarium – Star Projector. This super cool gadget works in any dark room. Put it in your child’s bedroom at night as a nightlight or enjoy family time in the evening while exploring the sky and constellations. This is a fantastic projector for classrooms as well! The push of a button brings 60,000 stars in to the room and it projects an incredibly accurate sky on to the ceiling or a wall. The projector includes comes with two projection disks (northern hemisphere with and without constellations) and a map poster of the sky viewed from the northern hemisphere. The projector has adjustable angle and focus, a timer feature, and a shooting star function. Additional projection disks are available: Southern Hemisphere and Warped Andromeda (from NASA’s Wide-field Infrared Survey Explorer) two disk pack and the Day and Night Earth and Moon two disk pack. 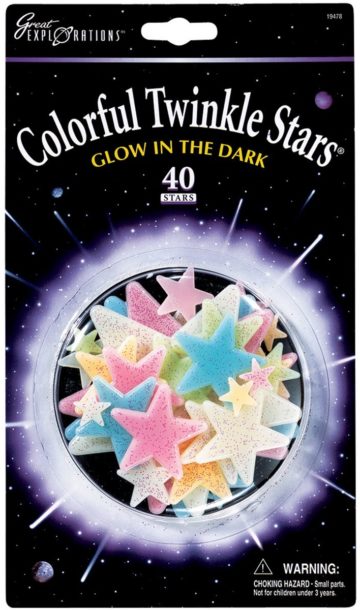 Great Explorations Colorful Twinkle Stars will brighten any dark room with colorful, sparkly glow in the dark stars that are applied to the wall or ceiling with safe adhesive putty. These are particularly cool because the colorful stars will stand out even when the lights are on. This inexpensive set comes with 40 stars. Have fun and buy two! 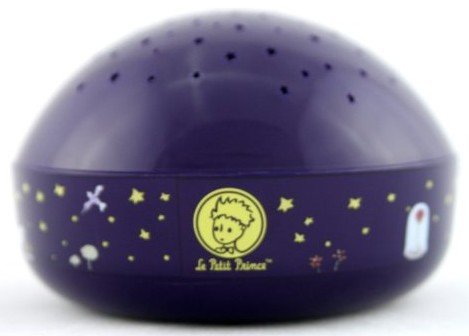 The Le Petit Prince “Touch Active, Easy Clean” Twilight Constellation Galaxy Round Projector bathes any bedroom or nursery in gentle, soothing starlight. It’s completely touch activated; turn on and off and change light and color settings by simply touching it. It projects stars in white, orange, blue, or green and can be set to change colors automatically. Powered by three AA batteries, this star projector is a great alternative to a night light.