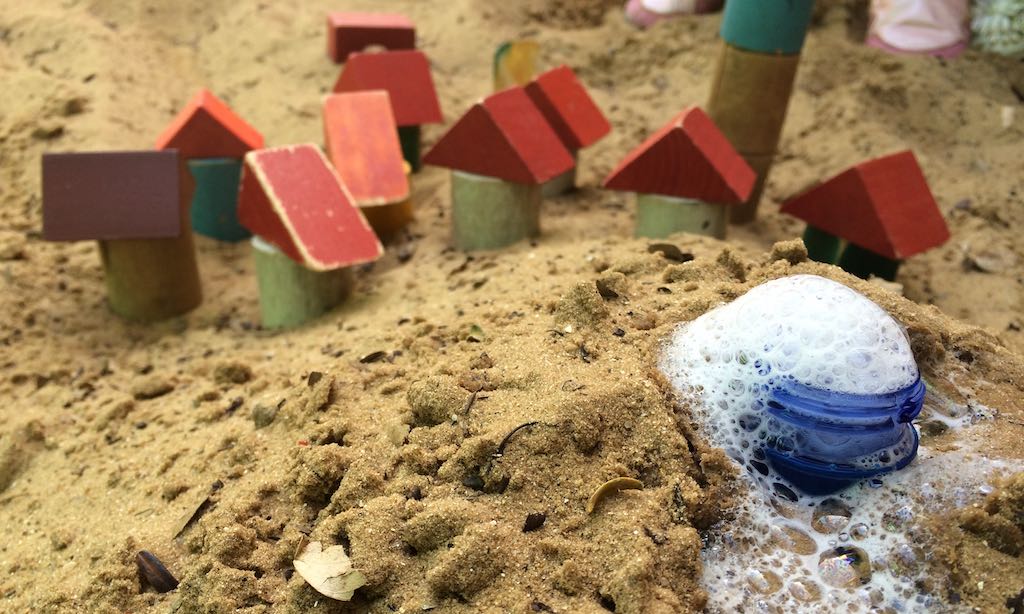 Digitaf is a technological kindergarten, located in a disadvantaged neighborhood of Holon, Israel. Our mission is to improve the area through the education of the children. In addition to the regular curriculum of a kindergarten, I am exposing the children to STEM related experiments and  topics, while encouraging them to ask questions, explore and bring their ideas to life.

During last year I conducted a program of science experiments. In order to keep the spirit of the kindergarten, I added a linguistic element. The sessions are in small groups of four to six children.

First, I ask a question, the kids then answer according to their knowledge or imagination and we come up with an experimental method. During the experiment, I lead the children to make up a related story, each boy or girl adds their part and together we come up with a funny narrative patched from their words.

In the picture above I captured the experiment of a soda volcano. The story behind it was told by five kids:

It’s about a guy named Aks Gaash, he works at a volcano with a special suit and his job is to make sure the town is safe from the volcano. One day on his way to the mountain, he meets a woman, they kiss, get married and have two kids. They adopted a dog that ate a lizard and got sick. The day after they eat a lot of ice cream and get sick too. One day Aks Gaash is working at the volcano and suddenly he is feeling that it is going to erupt, he runs to the town and warns everyone to evacuate.

We follow every experiment with more questions and inspire the children to imagine, think and be creative. It is an empowering activity and I would recommend it at any kindergarten.

Digitaf is located near Israel’s official Fablab, a community-based digital fabrication laboratory. We expose Children to fabrication tools and machines such as: 3D printers, vinyl and laser cutters, CNC machines and more.

The children at Digitaf use computers as an autodidact tool. Googale is an Israeli search engine for kids, who are not proficient in reading. It allows children to search and retrieve information on topics of interest (such as animals and their way of life, plants, countries and peoples, earth and space, holidays, etc.). The information is presented to them as images, words and sounds.

We have 3D printers at the kindergarten and I expose the children to the technology in different ways. At first I introduce them to Tinkercad and 123D Design, both programs are intuitive and easy to use as tools for 3D design. Next I introduce the children to the 3D printing process through a session I’ve developed. We choose three identical shapes, situated in different angles and print them together while changing the filament color to highlight the layers. Then they use the printers to build their toys.

The best way I found to teach kids how stuff works is by showing them hands on. Parents bring old toys and electronics and the kids disassemble them. Before they start, I ask them to describe what’s inside, how it works and what would it look like. I let them draw the inner parts from their imagination. After they unfasten the screws and the toy is dismantled, I tell them the name of the parts and their purpose. They Draw the inner parts and we compare the before and after drawings. Sometimes when we open a broken toy and find a detached wire we are able to fix it.

The children love working with real tools on real mechanisms. It is an excellent exercise that teaches mechanics and electronics, improves fine motor skills and confidence.

Another aspect of engineering is programing or coding. At Digitaf we teach code using Scratch Junior on tablets. The children can program their own interactive stories and games. In the process, they learn to solve problems, design projects, and express themselves creatively.

The foundation of math is numbers. There are many ways to teach how to read or write numbers, in addition to pronunciation and counting. One of the fun methods I found is by measuring things; Lengths of objects, weighing, comparing the heights of the kids and a Long Jump Competition. The activity is fun for all of the children because their participation is noticed and recognized among their friends.