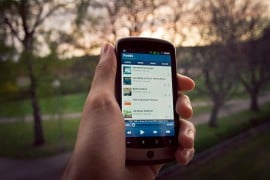 I have been having many conversations with schools recently about the use of mobile devices in the classroom, and have changed my mind.

I came across an article a while back called Don’t ban mobiles in schools, let students use them, by Alom Shaha (@alomshaha). His article suggests schools should allow and encourage students to bring and use their mobiles in the classroom. I highly recommend you read it as he lists some very practical examples of how to do this.

Personally, I cannot live without my mobile. It has been my main source of communication and information for over ten years. I have even started to use it to create, edit, share and present documents using a range of mobile devices. It’s not a surprise to many people that most students feel the same way.I can absolutely see how mobile devices could be used in the classroom, and how students can benefit from them. And I do not wish to get into the discussion as to whether they do more harm than good in regards to a student paying attention/being distracted. For the record, I think teachers could do a better job, if students were allowed to use their mobiles in schools (appropriately, of course!)

Whether schools like it or not, students do have them, and will bring them in. Some will be using them in the classroom to record the teacher’s voice for revision later – and some will be filming for some less-than-educational purposes. I still believe that, eventually, the advantages will outweigh the disadvantages.

However, I am not certain that this is the issue anymore. There are a couple of other factors that need to be considered. One is about ownership. Who is responsible for these devices?
If a school has “banned” mobiles, and pupils still bring them in, and something unwanted then happens to the technology, it’s simple – the student decided to bring in his or her mobile, and so is responsible. Schools could argue that their rules were broken.

In an ideal world, technology (mobiles, laptops, tablets, or even e-books) would be provided by the school, like sports and science  equipment are presently provided. It would be great because it would take out the issue of who is responsible for the equipment. If anything happens to the mobiles, the school can take the same action they would take with anything else. But with technology moving so quick, and schools having no choice but to adopt “old” technology for, perhaps, cost or other reasons, the investment is simply unfeasible.

What if students were told to “ bring your own devices”?
Imagine a teacher or school that  encourages students to use their personal mobile. Great – one less expense the schools has to worry about. Until the mobile (which is the student’s private property) gets damaged. Or lost. Or stolen. All of a sudden, you have parents calling the school and asking for compensation. And it’s not just about replacing the physical phone – what about the content stored on the phone (text messages, photos, or apps)? How does the school respond? If the school is encouraging and expecting students to bring in expensive devices to support their learning, then does the school have some responsibility (and possible liability) if something happens to those devices?

Another question: What if the lesson requires the mobiles to do a particular thing? For example, if students need to use a paid app for collecting data? Who pays for that?
What if an online connection is needed to complete assignments outside if school? Do students use their own data package? Do they hop on to the schools WiFi (assuming it is physically close and allowed of course)? What if a student’s mobile is not as sophisticated as the others or the teacher’s  (unfortunately, still a reality in some places)? Will more financially able students have access to better learning than their counterparts, because they can afford a more capable and advanced device? This is not an unlikely proposition, just think about how the display between an iPad2 and an iPad3 would affect a student of art or science. I am not very comfortable with the idea that the burden of cost be placed on the students and their families (and they will naturally compare handsets with each other).
And if teachers are only asking students to use their mobiles as calculators or stopwatches… well, I think it would be easier and more cost-effective for the school to just buy dedicated calculators and stopwatches.

Some schools lease out their devices or spread the cost over many months. Is this a realistic and viable choice for most schools? Some will be able to do this, for sure, but what about those schools that can’t? And will any issues arise over what kind of data is on those devices? Will the school be able to tell students not to store media that may be acceptable at home, but not in school?

What about cross-platform access and compatibility? If the teacher uses an app that is exclusive to iOS, but most if the class uses Android, how will that be addressed? Will schools expect students to replace their devices? Hardly fitting in with the BYOD ethos.

A final point about students using their own devices – who controls their access to the Internet? If they were using the school’s WiFi, maybe there is a filtering policy in place. But what if the student is using their own data connection? What if they are accessing an inappropriate app, websites, or data in school? How can the school deal with that? I’m sure there will be new software that will help monitor these things but what effect will that have on the productivity of the mobile device? Will schools become unofficial ambassodors and promoters of certain products?
If schools start suggesting what devices students should be using, then where is the freedom for students to choose what they want? Should schools start making minimum specifications or even have ‘preferred’ devices?

I am not trying to play down the benefits of technology or BYOD in school – just that all advice, experience, and decisions have to be based on reality. They have to be practical for all parties and make sense to everyone. I applaud Mr Alom Shaha’s use of mobiles in his classroom – it is very encouraging, and I do think it is worthwhile, and will eventually be the norm. One day, students will be able to bring in their own choice of technology, and make the most of it. It will be seamless and problem-free. It could be the norm already in some schools, and it will be the norm elsewhere soon.

However, in most schools, students bringing in and using their personal mobiles adds an unwelcome, potential complexity that teachers just don’t have the time, experience  or resources to deal with. Unfortunately, I think most schools will have to wait a little bit longer before students are allowed to bring in and use their mobiles in class. Schools are almost there, but some details still need to be worked out.

A final word: I just want to clarify that I believe that staff and students are very much ready to make use of mobile devices in the classroom and that it is a great idea, other than a few details. I’m not entirley convinced that school policy is ready yet.