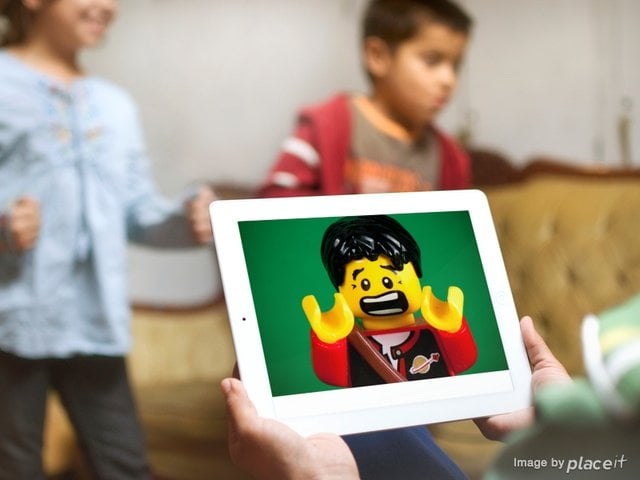 It all started the day I announced we were not going to use paper and pencil for our lesson.  You could have heard my middle school students’ shouts down the hall.  I had been using iPad apps for certain applications such as the dictionary and Typo on a regular basis, as well as for special projects.  Now it was time to jump in with both feet and my students could not be happier.  The students looked at me quizzically when I told them they were going to work harder and smarter. The students started rolling their eyes.  Then I announced that for the first time they were going to be able to go into their regular classroom and teach their classmates… Then the students knew I really had lost my mind.

This journey has not been without bumps and dips in the road.  In fact, at one point I was ready to give up.  However the students started getting it, we are learning together and I never know what my students are going to surprise me with each day.  I want to share with you five strategies that we are using in our classroom to use iPad apps to access the Common Core. 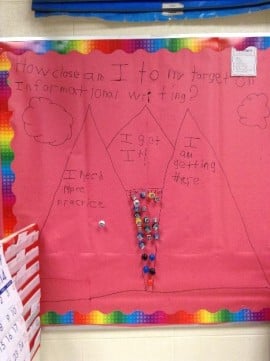 Create a very clear learning target, then pick the iPad app not the other way around.  At the beginning of the year, students would see a neat app, but were not able to explain how that app met their learning target.  Now they create their own learning target bulletin board so they can always look up and see what the common core standard focus is.

Now the students are writing their own “I can” statements on index cards and hanging them up.  They pick the IPAD app last.  The students often will choose to use an App in a way I had not thought of.  They remind each other to look at the focus and hold each other accountable. 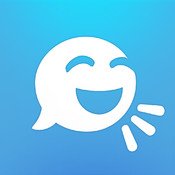 Students need to have a say in the iPad app that will work for them.  As students work with the iPads they will begin to know what will work and what they are comfortable with.  I may “guide” a student to use Tellegami (iOS & Android) as it will help him reach an IEP goal of being able to ask and answer questions. Another student chose to use the Notes app and use that for the next part of his project as he is not a good speller and it showed him his mistakes.  Students may still choose to use the paper and pencil option and then transfer their idea to an iPad App.  One of my students actually surprised me by asking to use the iPad to type his sentences instead of write them.

Using an iPad app will be a creative way to “tweak” your lesson, not run your lesson

Using an iPad app will be a creative way to “tweak” your lesson, not run your lesson.  Earlier in the year, two students had to read their science book on the classifications on animals and answer several questions.  We read the text together and then they created a Mindmeister (iOS & Android) Map on the Animal Kingdom, separating the different classifications and breaking it down further into cold-blooded, warm blooded for examples and then gave examples. 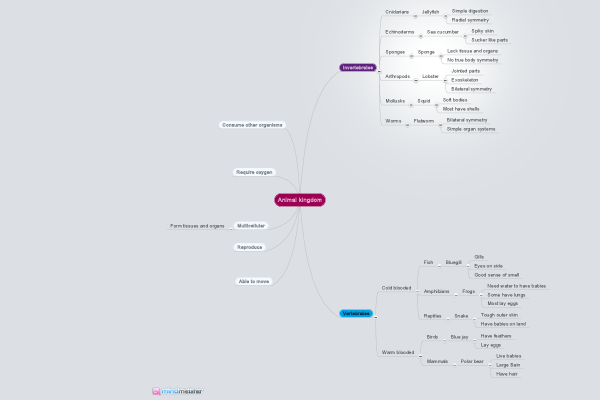 This was printed and given to their regular education teacher.  This counted for their assignment instead of answering two pages of questions.  The best story is this also became a Universal Design Project.  Their project, originally intended to be differentiated, became the study guide for the 5th grade science common core unit on animal classifications.

Common Core is based on showing what the student knows. Some students may feel more comfortable working by themselves, others work better in groups.  Try several different groupings both preferred and non-preferred.  Create a couple of rules for the teams to follow.  Take a picture with the Camera App and you have your class rules.  We often write things out on the board, take a picture of it and print it out for them to refer to later.  Using iPad Apps does not need to be an elaborate undertaking, but it can be as simple as taking that first picture of a student’s work and printing it, emailing it to their regular teacher or parent.  Students are thinking much deeper and coming up with their own connections to other subjects.

When we worked on text examples, a student had done his project on the book “Speed.”  He then asked his teacher to present his project to the math class, because they were working on time, distance and speed.  After picking the teacher up off the floor after his unusual request, my student never had such a big smile. He was able to engage his classmates and talk with authority on something he knew, not just simply keeping up with the class.  His classmates learned from him, and it created respect for the student.

Pick an iPad app where the lesson can be replicated and shared with other students.  The students have recently used Quizlet (iOS & Android) to create their vocabulary on Ancient Greece.  They looked up the vocabulary and wrote it out, then they created a quiz using text as well as pictures and have it ready to present to their classmates.  With this app, after creating the quiz, options are available from flashcards to games.

With all the apps to choose from, this could become a weekly article.  This is just a couple of the many apps that we use. Once a teacher has determined the learning target, there is not a right or wrong App to use.  To see students monitoring each other’s behaviors gives me time to work with students individually to guide a project or reteach a concept.

My 5th graders will be starting branches of the government and they have wrote their “I Can” statements and have picked their app. They also know if the app is not working, they have the ability to change to a new app.  So instead of eyes rolling and comments of, “Mrs. Francis, for real?” the conversation has changed to “Is it really time to go?”  I guess I haven’t really lost my mind after all.

Ann has been teaching special education for 8 years and is currently working at a middle school in Buffalo, MO. Her passion is working with iPads and learning to implement the technology to put her students on a level playing field.