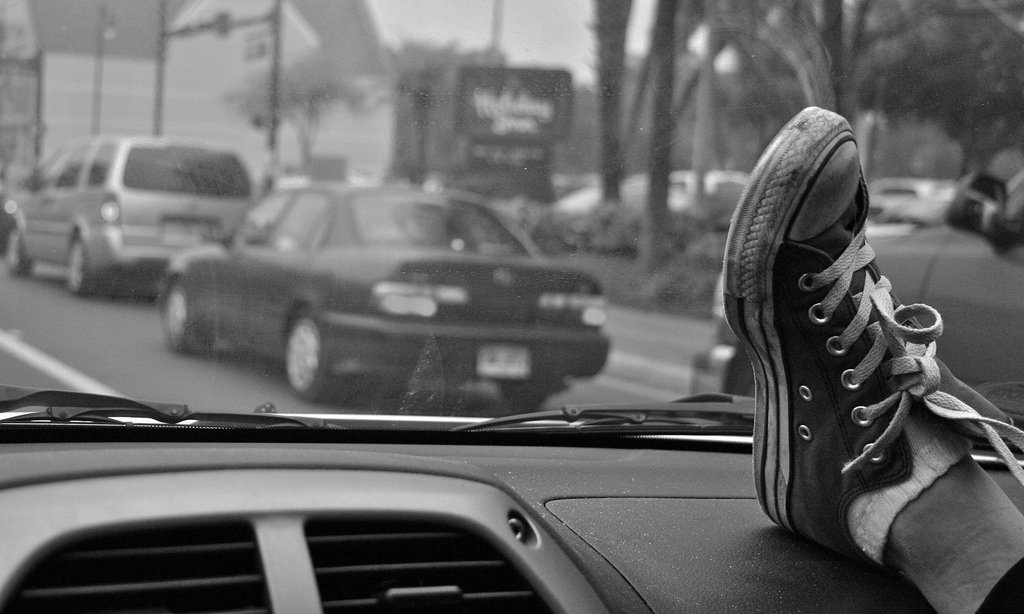 It sounds like a conversation between two wanted assailants that perhaps had tunneled out of Riker’s using plastic spoons and toothpicks. But, no. This was a typical exchange between me and my four-year-old on any given day. Look, I’m not proud. But, sometimes? Sometimes that illegal turn or that little extra burst of speed just makes your life so much easier.

We would often make walkie-talkie sounds just to give it that extra sense of adventure. She was a damn good look-out. Best co-pilot I ever had. The limits of her car seat didn’t seem to eclipse her abilities. And I would argue that this fun car activity was a far better game than buying a mini-van with the zombie screens mounted in the seats. We were bonding. And talking.

The problem now? Now, I have to teach that same child how to drive. Despite our shaky careers as minor traffic violation partners, I have been able to turn this child’s driving life around. If I can do it, so can you. Here are three tips that got me through.

1. Allow Them To Correct You

Despite being totally wrong about 85% of the time, most teens insist they are right approximately 100% of time. The gap between these two numbers is dumbfounding. What this means is, despite having never operated a moving vehicle, they already clearly know what they are doing. Obviously, think of the rage induced “conversations” this can lead to when your teen grabs the wheel. Let’s be preemptive.

Once your teen has passed the written test, apparently giving them some sort of honorary doctorate in all things vehicular, you drive and let them correct you. Let them get as bossy as they want to be. Shut up. Drive. And take it. Acquiesce to their obnoxious tone and taunts. But, let those conversations happen. If they think you’re too close to the car in front of you, then have that conversation. They don’t think your blinker went on early enough? Have that conversation. Think of this as a one-on-one student-centered classroom. You will be surprised how much better they will respond to you once you allowed them this little exercise a few times.

It may even help your driving a bit. While doing this, my daughter nearly cured my road rage. I’m a white knuckled driver. I am typically a peaceful, easy going guy. I seem to save it all for the car. Not good. It’s just true. When I purchased a car with a sun roof, my then young child remarked, “Wow…now everyone will see your finger.” But, twelve years later, she has rectified the problem. I typically don’t f-bomb my way through traffic, but I do grunt and growl and moan and screech. The noises can become quite heinous.

“I know,” she said. “You make the noises and I’ll interpret them. I’ll make faces that I think should go with each noise.” These I-Love-Lucy faces were hysterical. Now, even when she’s not in the car, I start to laugh whenever my knuckles whiten around that wheel.

“See this jerk parked at the corner?” She nods. “He must know that nobody making a left turn can see. He’s got to know. So, you’re going to have to deal with this guy every morning.”

Empower your child by allowing them to master the routes they will most likely use. Most of us don’t typically let our sixteen-year-olds go for leisurely drives or random road trips. Driving is more of a necessity. Will they be using it to go to school? Master that route. In fact, master two routes, so they have confidence when going an alternative way in case of traffic or road work. Pick their top three. Our routes were dance class, school, and her best friend’s house. Also, master the neighborhood around your local DMV. Front load that driver’s test as best you can. Some built-in instinct and muscle memory behind the wheel will surely lessen their odds of making more serious mistakes.

You will be amazed at how tongue-tied you get at even the slightest sense of danger when your teen is behind the wheel. Garbled, mumbled words slurred together in a mix of panic and urgency is no way to communicate. You may want a few slogans to cover a few key issues. Just like many of us used My Very Educated Mother Just Served Us Nine Pizzas to remember the order of the planets back in the heyday of Pluto, a catchy phrase or slogan might make life easier for you and your teen. We used three.

It was easy to recite these phrases before we started driving. A great check-up before we hit the open road.

For me, the experience has been almost identical to the warm-hearted auto insurance commercials when the father hands over the car keys to his daughter and for a few sweet moments, he sees the toddler she once was. His heart swells. Another rite of passage leaves him farther behind. I feel it each time. What the commercial chooses not to show is that very next moment when you realize that your toddler has now been given legal permission to drive. To this, I say relax. As it is with most parenting, what you put in is what you get back. My sixteen-year-old is a responsible kid of some serious character. She will approach the road the way she approaches most tasks. So? Do your best, sit back, and put some Granny in your giddy-up.