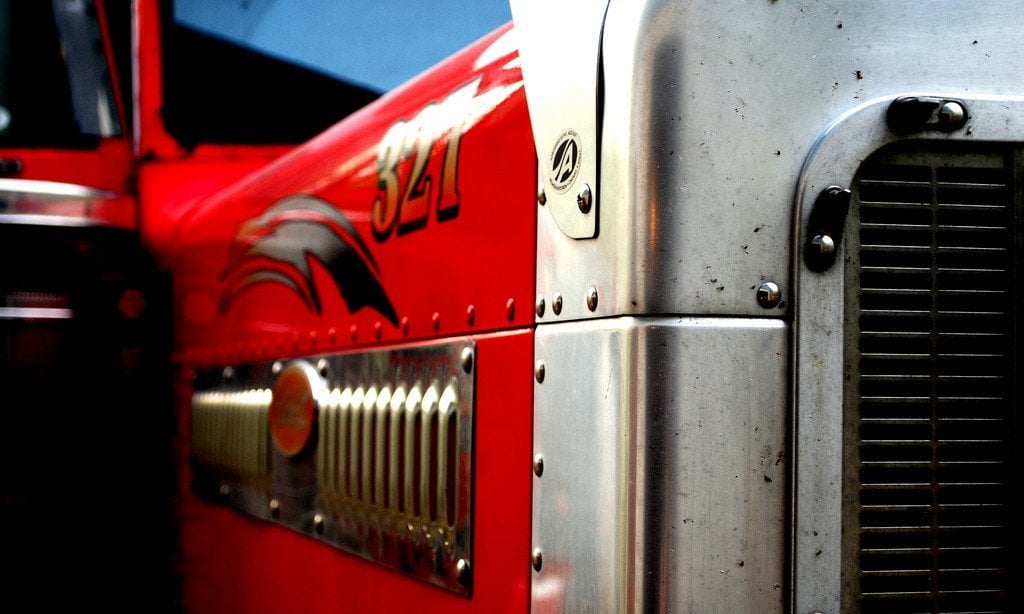 Toy semi trucks are great for hours of play and require little more than your child’s imagination to power them. Whether they’re playing with a single truck or an entire fleet, or working in a sand box construction site, youngsters love to move these trucks around and load and unload them. Toy semi trucks come in a variety of sizes, can be realistic or not, and can have lights and sounds or none at all. As long as they are age appropriate, they can provide unlimited fun and encourage children to move around as they play. 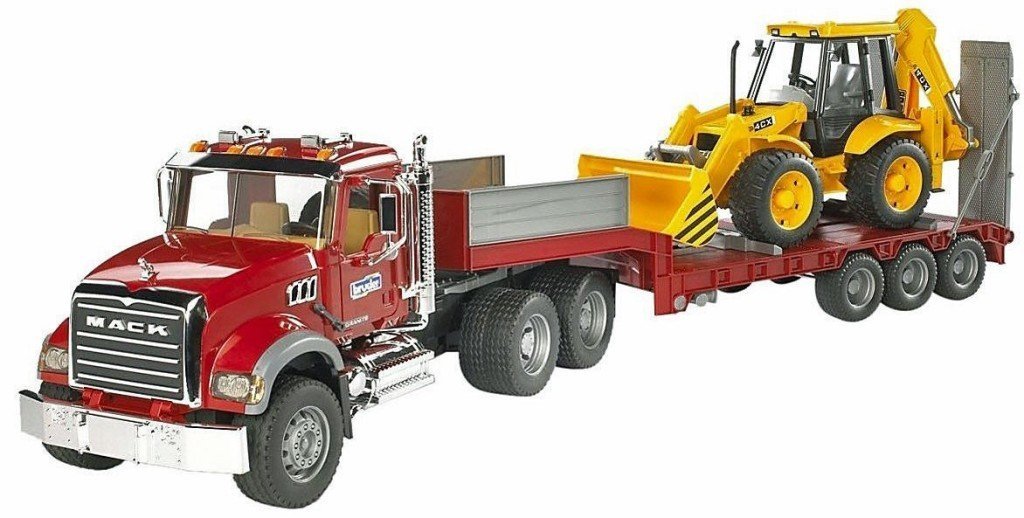 Featuring the classic Mack truck, the Bruder Mack Granite Flatbed Truck with JCB Loader Backhoe is two toys in one! The 1:16 scale semi truck pulls a flat bed trailer with a backhoe, and both construction toys can be played with individually or separately. These two toys will fit perfectly in any youngsters construction site, outdoors or indoors. Fully playable, the truck and detachable trailer have a fifth wheel hitch, removable side gates, fold-down ramps held by chains to unhook, folding mirrors, opening doors, a folding support bar, a locking device, and a tilting cab with viewable engine underneath. The included JCB Backhoe Loader has a fully-functional front loader and backhoe that moves up and down and swings side to side.

The Ertl Big Farm Peterbilt Model 367 Vehicle With Grain Trailer is a detailed scale model of a truck and grain trailer, but as toy semi trucks should be, it’s durable enough to withstand plenty of play, both indoors and out. Ertl is a well-known and trusted manufacturer of high-quality plastic toy vehicles. This truck has lots of realistic details including opening doors, movable mirrors, and an extra set of wheels.

The Country Life – Kenworth Livestock Tractor Trailer with 10 Head of Cattle is approximately 17 inches long, and it’s designed to transport the ten included cows. This truck is certain to add fun and playability to any young truck enthusiast’s highway, farm, or trucking fleet. Combine it with a farm playset for even more fun! 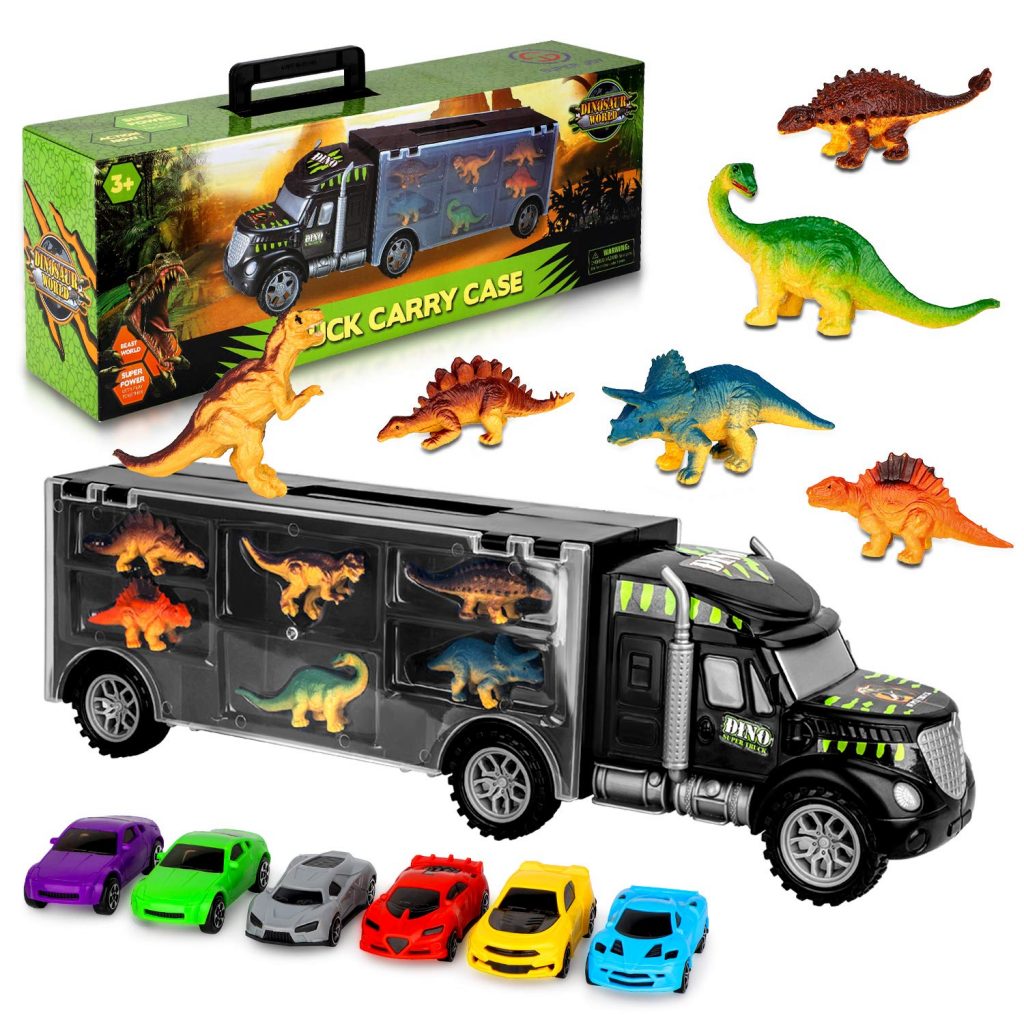 A kid needs an AOKESI Transport Carrier Truck to transport their dinosaurs. The carriage truck fits six dinosaurs with a transparent plastic cover to see the dinosaurs inside…and so that the dinosaurs have some light during travel.

Included in the package are the six dinosaurs and six alloy mini matchbox racecars too. Switch between the prehistoric world of dinosaurs and the modern world with cars or create a new world where both co-exist.

A carry handle enables the child to transport the semi truck with its contents to the car, around the house or to a friend’s house without losing a dinosaur or a racing car. The transparent cover keeps the dinosaurs and cars together, dust-free, and safe during storage.

Hot Wheels and toy semi trucks play together perfectly with the Hot Wheels City Blastin’ Rig. This cool truck hauls up to 14 Hot Wheels cars or any other cars and equipment that require transport. It has as built-in, kid powered launcher to get the races started. It comes with three Hot Wheels vehicles.

The New Ray Toys 1:32 Scale Kenworth W900 Double Belly Dump Truck Semi Truck Trailer features a bright red semi truck and two cool dump trailers. The truck and trailers are primarily die cast with some plastic parts. This is the perfect truck for transporting sand and dirt and is a great addition to any toy trucking fleet. 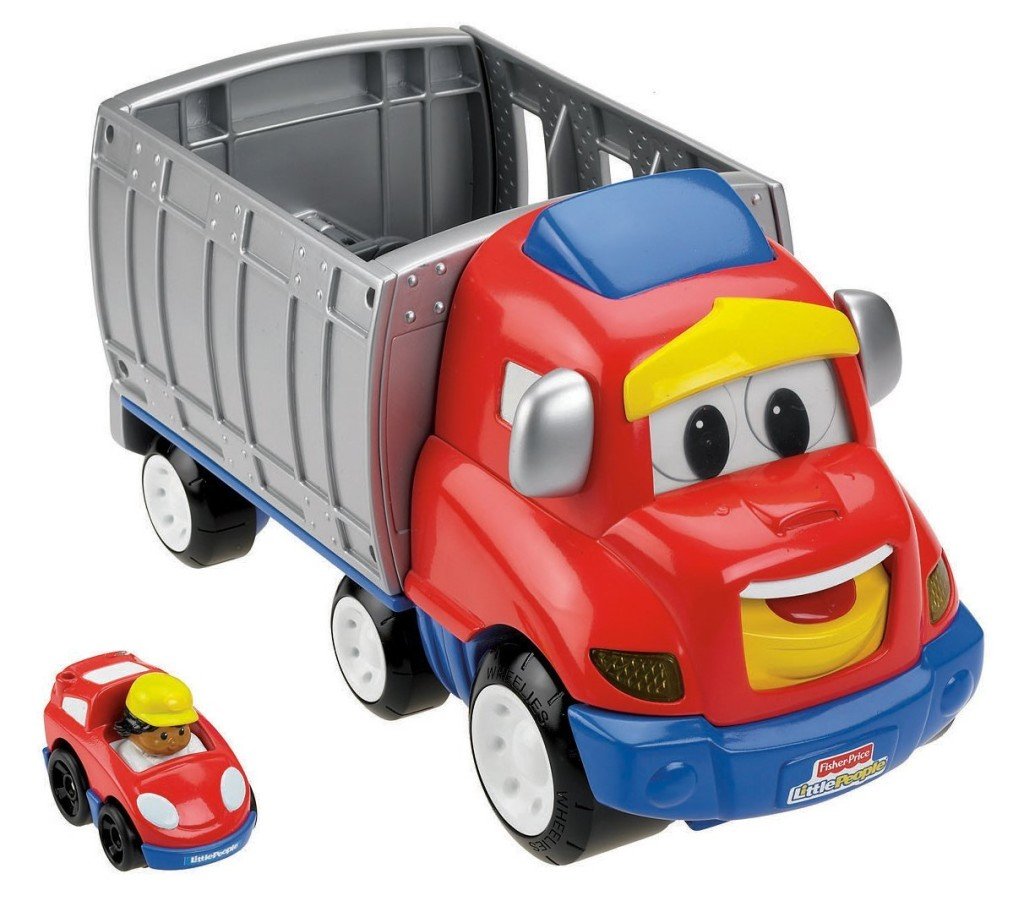 Designed with children 18 months to five years old in mind, the Fisher-Price Little People Wheelies Zig The Big Rig is the semi truck toy for the littlest kids. Zig is an engaging an interactive toy with lots of features. Zig’s eyes, mouth, ears, and brow move to show his funny expressions. Open the side of the truck and Zig wiggles his ears while encouraging kids to “load ’em up, move ’em out”. When crashed into a wall, the truck rolls his eyes and reminds kids that they’re going the “wrong way” or just had a “fender bender.” Zig plays and rolls on carpet or hard floors, has volume control for quiet play, and comes with Roberto the Wheelies race car. There’s also room for more Wheelies toys like the Little People Wheelies All About Working vehicles.

This Volvo Toy Truck is just like the semi tucks we see on the highways, today. Playable die-cast, it has the features and look of a real truck. Even the doors and trailer open and close. Put a driver in the seat and some cargo in the back and this truck is ready for business.

The Bruder Toys Man TGA Low Loader Truck With JCB Backhoe Loader is two toys in one. It features a cool, tipping cab semi tractor that reveals the engine when tipped forward. Other details include the clip-on low loader trailer with fifth wheel hitch and loading ramps that fold up and down, as well as a fully functional and playable front shovel excavator with 360 degree swiveling driver’s seat. 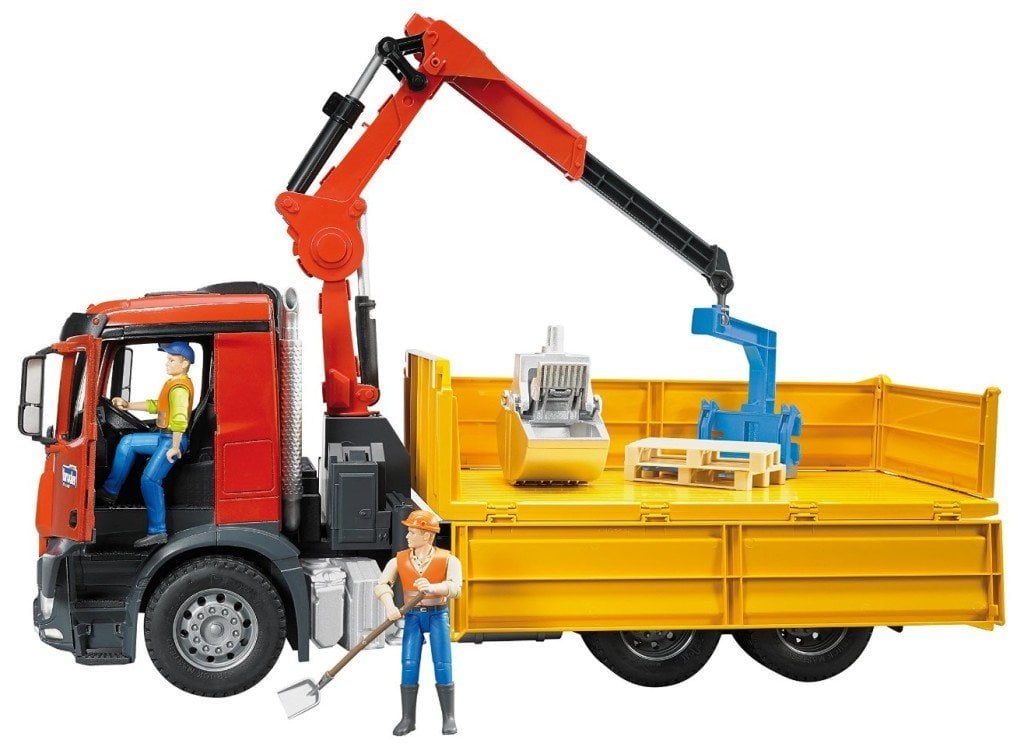 The Bruder MB Arocs Construction Truck with Crane and Accessories is a necessity for any imaginary construction site; it even comes with construction workers, a pallet fork, two pallets, and a bucket grabber. This toy semi features a sturdy, true to life design, with a fold-out telescopic loading crane that rotates 360 degrees and can be moved and then locked into place. Open and close the truck doors so the workers can climb in and out and extend the crane to stabilize the vehicle for loading and unloading. 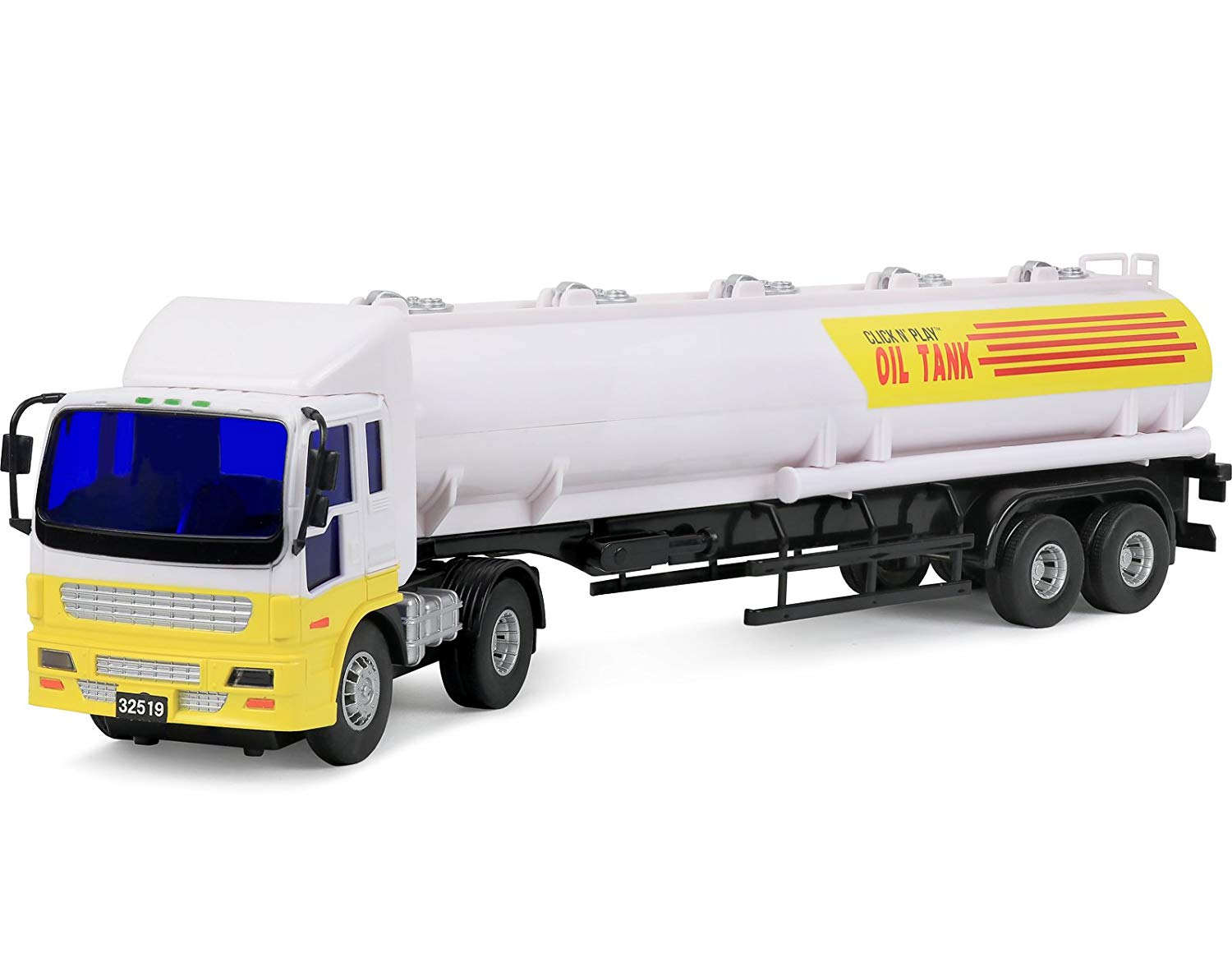 The Click ‘N Play Jumbo Oil Tanker is made of sturdy BPA free plastic and will endure your 3-year old’s play. The tanker truck is about 16 inches long and 4 inches high, which is large enough for little hands to maneuver it.

The tanker detaches from the truck, and land gear legs keep the oil tanker stationed where it’s parked. A 180-degree head rotation allows maneuverability for the semi-truck to turn without overturning or losing its oil tank.

Toy semi trucks are a great vehicle (pun intended!) for fun and imaginative play. Tell us about your favorite toy semi trucks in the comment below!