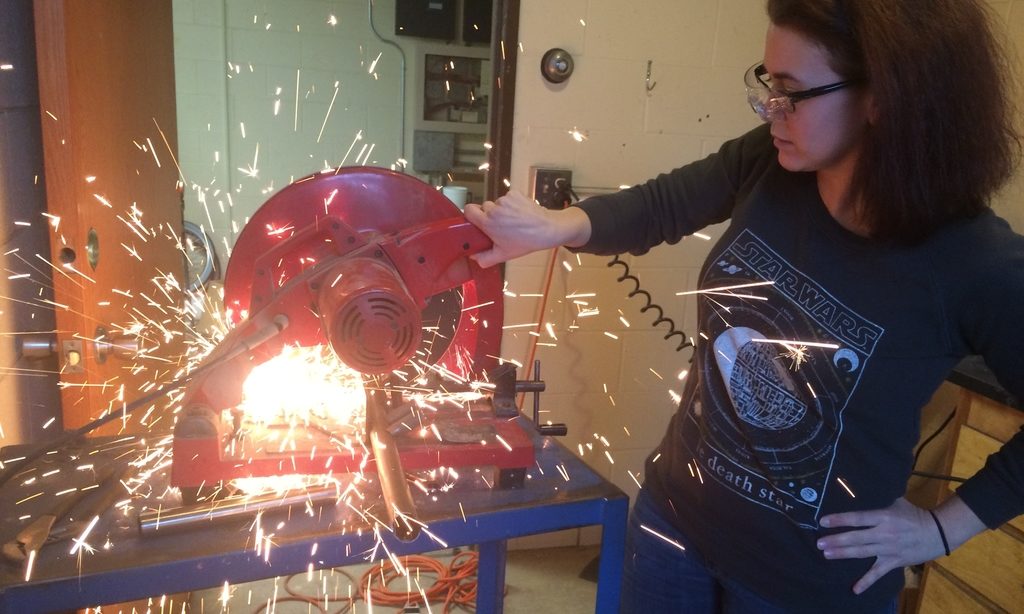 This is the story of how I took my passion for building energy efficient cars and used it as a vehicle to bring STEM into my French classroom.

I have always loved the world of Science, Technology, Engineering and Math (STEM); seeing and learning how things work and fit together was a big part of my childhood, largely thanks to the influence of my father. When I started working as a French teacher in an all-boys school it never occurred to me that my childhood experiences would be of use. I didn’t know that memories of studying life through a microscope or of watching my father build computers would influence what I did in my linguistic focused classroom. Yet it has.

Nine years ago I needed to move classrooms. My French program at the time had lower numbers than the Latin program so a classroom switch was ordered. It was off to the former faculty smoking lounge for me and my crew. Located amid the sea of lunch tables and oversized garbage cans it was right off of the cafeteria. It boasted only one other classroom as its neighbor. At first, I was a bit demoralized to have to move into such a small room, but it turned out to be one of the best things that ever happened to me.

The room adjacent to mine belonged to the school’s physics teacher who moonlighted as the Experimental Vehicle Team (EVT) moderator. He always seemed to be in the process of building something. One day I heard a large boom that was quickly followed by a knock on my door and an apology; they were in the process of building a safer electric motorcycle and part of the chassis had just hit the floor. My curiosity peaked and I had to see just what exactly was going on.

I walked into a room that could have doubled as my father’s basement workroom; with the addition of a string of bass fish lights that hung from the ceiling and a large poster of Albert Einstein sticking out his tongue. The room was filled to the brim with tools, old science equipment, books, and most importantly; students, some were checking battery packs while others were trying to figure out what was causing the chassis to hit the body. The level of engagement matched the level of organized chaos and I was instantly hooked. 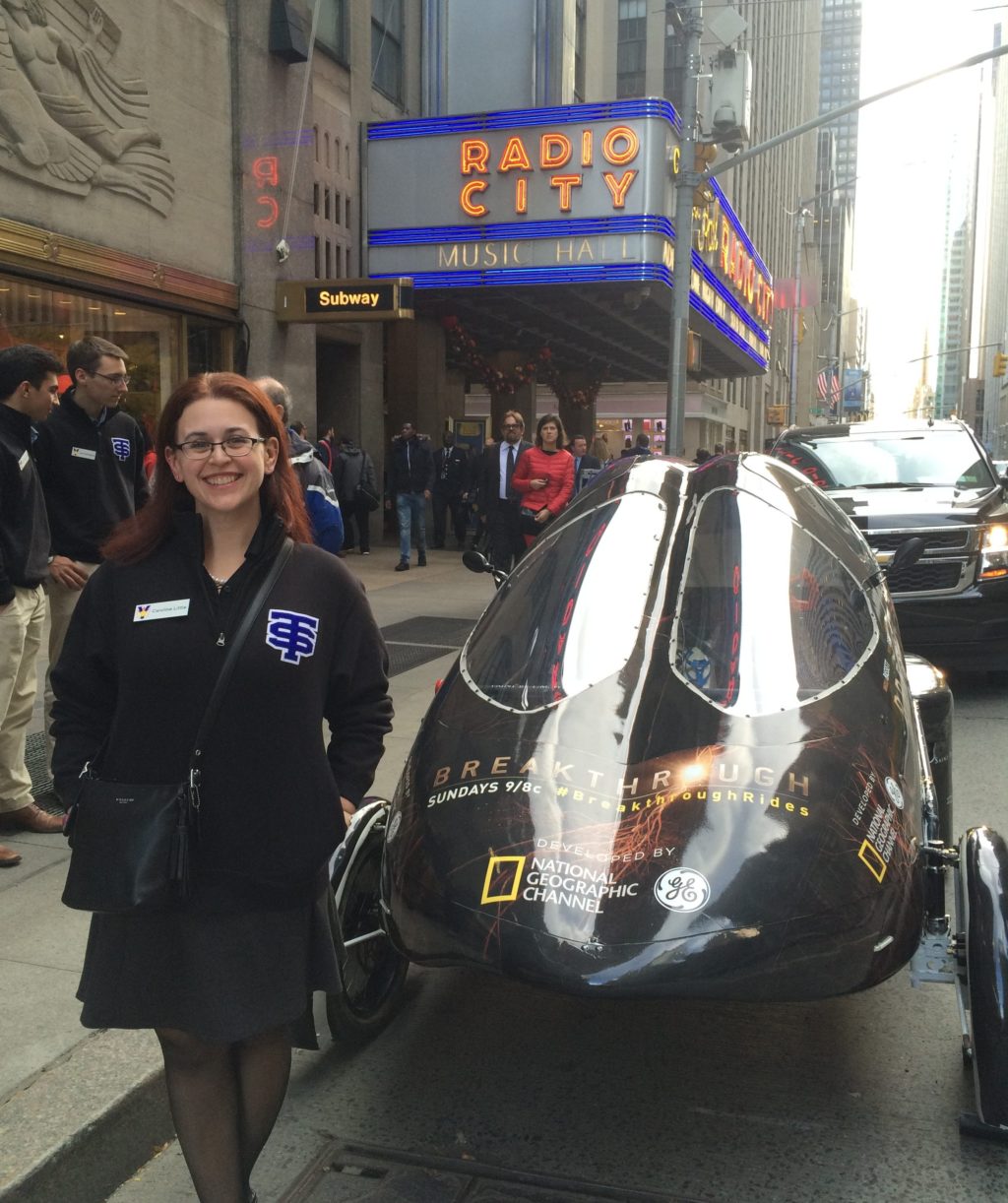 Alongside Mark, my physics teaching counterpart, I am currently in my seventh year of moderating our schools’ engineering co-curricular, known simply as EVT. When I am not teaching the finer points of French grammar my attention is focused on where we currently are in the build process. Every year we have this crazy notion of constructing a new car from the ground up. We do this to give our students a full engineering experience. We are in a constant state of fabrication, each year hoping to come up with a new a better vehicle than the last, learning from our long list of mistakes as we go.

I am afraid to say that it took a few years before I realized that I could sneak the same excitement that my students have in their STEM classes into my French class. Now it is by making learning commands less about telling someone to wash their hands or brush their teeth, and more of where to put the solder and how short to cut the wires, I have found some unique ways to marry STEM into the world of language. Just like the Greeks who hid their soldiers in the Trojan horse to invade Troy, I began to sneak STEM into my classroom as a means to generate that same level of engagement I saw when I first stepped into Mark’s room.

All around my classroom are posters in French, but they are not of your typical Parisian café or lavender field variety, although I do have a few of those as well. Infographic posters detailing life in space, future cars, weights and measurements and the solar system are arranged next to old circuit boards, my father’s patents and a collage of old playing cards where participants would try and collect one of seven families of marine life. These are juxtaposed next to posters on telling time, describing the weather and most importantly, how to ask to go to the bathroom. And while I don’t have any glowing fish hanging from the ceiling and there is a considerable lack of organized chaos, there is a unique creative feel that lends itself to interesting and thought-provoking conversations.

Now not everything that I do relates exactly to STEM or STEM boxes. Especially not when we are in the thick of learning about the differences between past tenses. When my students can look around the room and see the real-world practical application of the language that I so dearly love, plastered all around the room, learning no longer becomes a battle.

It’s About More Than Just The Language

In fact inspiring our students to achieve and push themselves is as simple as taking them outside to look up in the sky. There, orbiting around us is a technological and international feat of wonder that is the true culmination of what STEM and world language are all about. Traveling at 17,500 mph in a state of constant free fall the International Space Station (ISS) has been orbiting the earth for nearly twenty years. From a language teacher standpoint, the ISS shows the true value in the importance of continuing studies in both languages as well as the STEM fields. People from every nation around the world work together to create and carry out experiments in microgravity. At the same time, each is learning the nuances of another culture and language. There truly never has been a better time to be a world language teacher. I get to excite my students about both space and French while we watch one of Thomas Pesquet’s, current French astronaut and ISS inhabitant, many videos about life in microgravity.

My love for STEM has also helped build and strengthen my relationship with students. My young Jacques Cousteaus are exploring the depth and breadth of the STEM world. They seek me out to describe their latest Arduino builds, their Raspberry Pi projects or how they are making their very own 3D printer from on-line ordered parts. My French students ask what the capstone project will be at the end of the year. Everyone is excited to try their hand at ideating and engineering something new.

Our students want to create. They are born with a natural thirst to build. They don’t want to be passive consumers of information. We need to help move them beyond being laissez-faire purchasers to hands-on designers who construct their future.

Some may argue that what I am doing in my class has nothing to do with teaching French or the study of the francophone world. Not so, I hear Baudelaire and see Monet while my students solder; tongues sticking out in deep concentration as they decipher which input on their LED they need to connect to the circuit board, “C’est celle-là Madame?”

This year I find myself once again in a new classroom.It’s a fair bit bigger than its predecessor. Most importantly, all twenty-two of my desks are filled with inquisitive minds. They’re eager to hear not only about what life in France is like, but also what we are going to create.

Featured images are the authors own.

WAIT! Check out this OUTSTANDING Offer From KiwiCo!