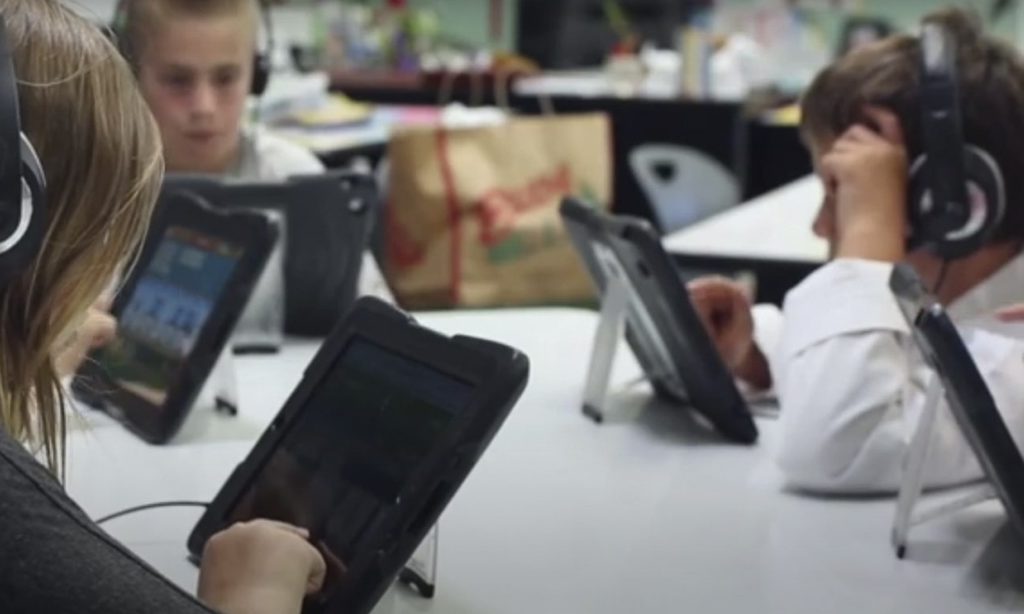 As someone who uses my iPad, not only on a daily basis but multiple times throughout the day, I need a functional and durable iPad case. I’ve been an iPad user for a couple of years and have been through a few different iPad cases without finding exactly what I was looking for. Recently I was offered the opportunity to try out and then review a couple of UZBL iPad cases. The company’s tagline states that they are “the most usable cases” and I found that to be absolutely true. 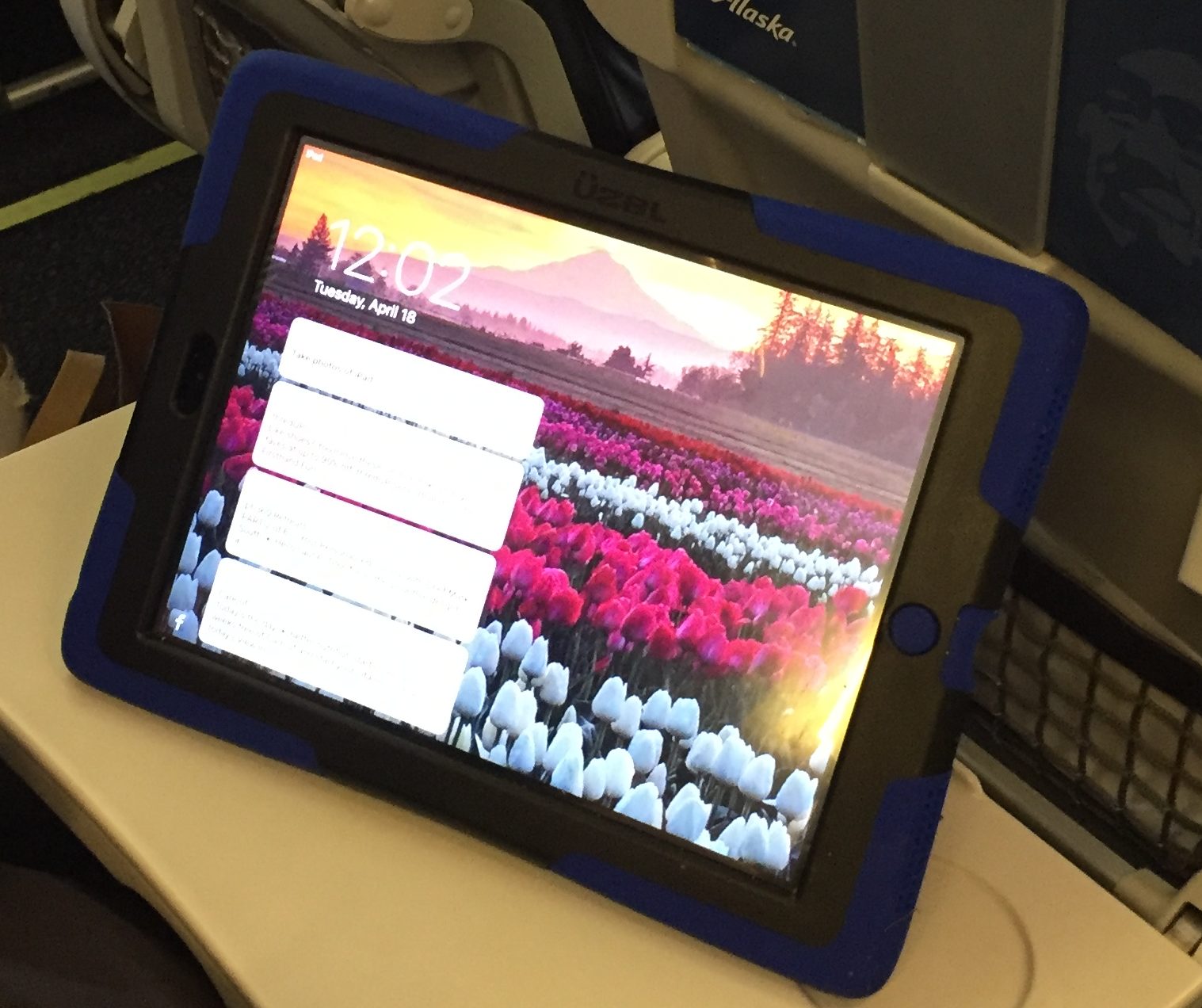 UZBL Shockwave has turned out to be my favorite iPad case of all of the cases I’ve used. At first glance, I wasn’t sure I would like the bulk of this case but it turns out the sturdiness makes me feel like my iPad is more protected. It doesn’t feel as bulky as I thought it would or as it appears.

The stand on the ‘Shockwave’ case is one of its best features. It is very sturdy and unlike previous cases, it stays upright even when bumped or jostled. You can also choose from two positions how upright you want the iPad when you’re using the stand. In the picture above, you can see my iPad on an airplane tray table. There was no slipping and sliding and I wasn’t worried about my screen smashing.

This is another great feature of the ‘Shockwave’ case—the built-in screen protector. It was one of the first things I noticed about the case. Initially, I was concerned it would make it difficult to use the touchscreen on the iPad but I have had absolutely no problems. I love knowing the screen is so well protected; It’s so clear I don’t even notice it when I’m using the iPad. This is my favorite aspect of the case!

Features of the ‘Shockwave‘: 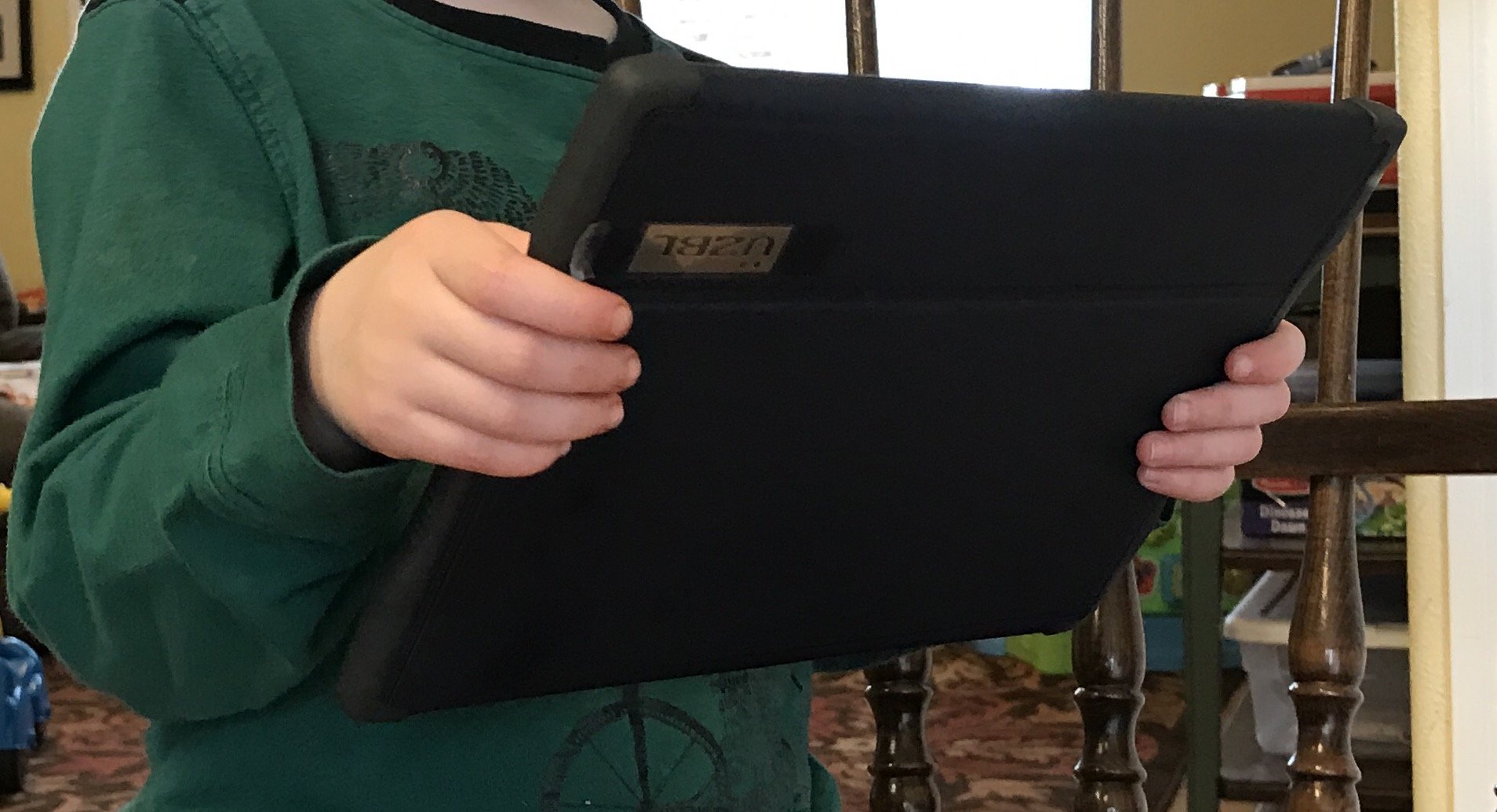 The ‘Rugged Slim Folio’ was great for slipping my iPad into my bag without taking up extra space and the scratch resistant cover seemed to provide more than adequate protection. This case even survived a dramatic drop a mark left on it, the “scratch resistant” claim is true! I had decided to trust the UZBL website that stated all of their cases are drop tested without doing my own drop test! But, as luck would have it, one of my children dropped the iPad while the ‘Rugged Slim Folio’ case was on it. I was grateful for the protection of the cushioning cells to protect my iPad in that moment! 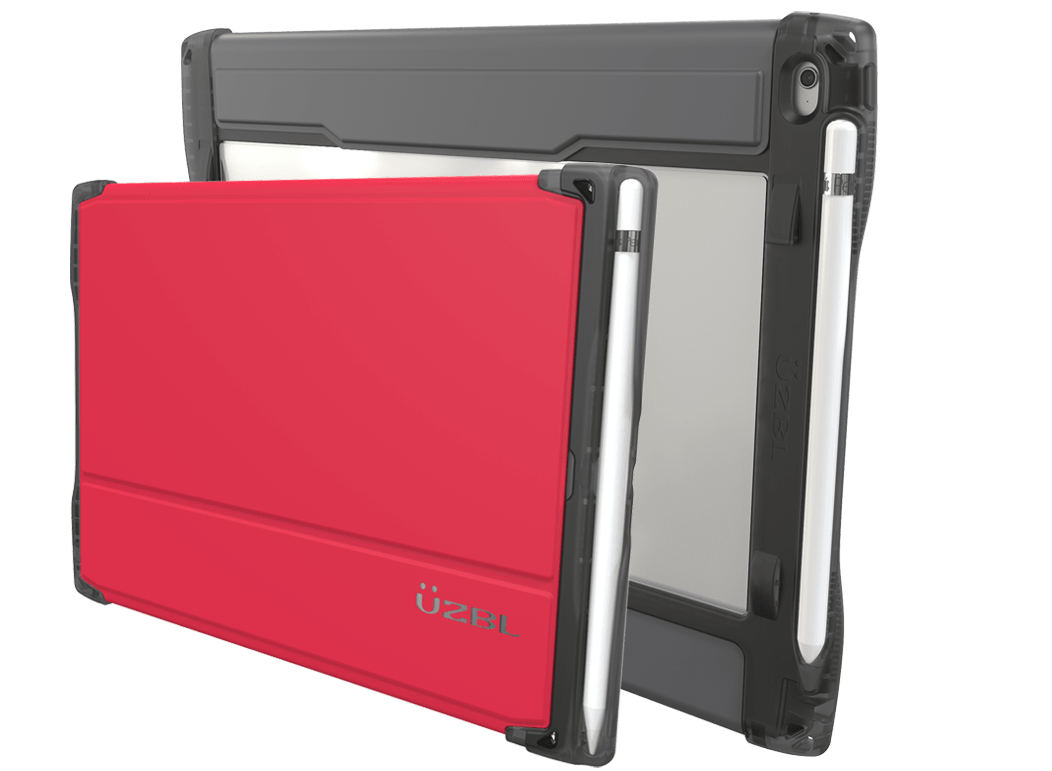 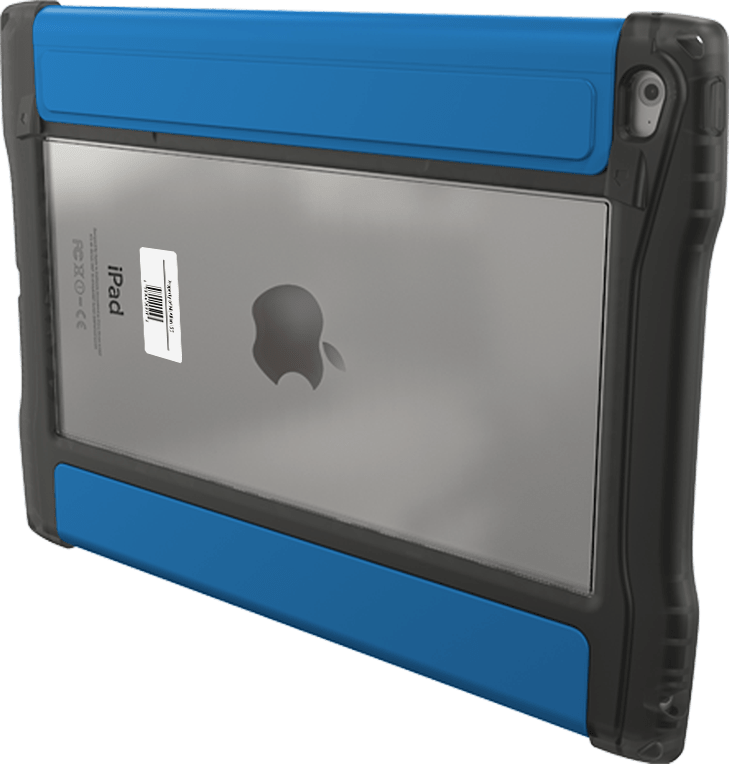 As a mom of young children, my iPad has at least as many children’s apps on it as it does those meant for adults. With kids and electronics, there is always the risk of an expensive item getting dropped or spilled on. At least that is the case in my house. My preschooler likes to use my iPad for educational apps and games as well as occasionally watching cartoons on the go.

While I know my daughter is as careful with the iPad as a four-year-old is capable of being, it does go through some hard use at her hands, including the dropped iPad I mentioned previously. I was happy to find that both of the UZBL cases are sturdy enough to stand up to the kind of handling they will receive at the hands of young children.

Although both cases are sturdy and I keep the iPad well cushioned, for my purposes I preferred the Shockwave case when the iPad was in my daughter’s hands. I love how well protected the screen is and the stability of the stand for keeping the iPad in place. Both cases were tough, but this one felt tougher. The Shockwave would be my first choice of iPad case for use with a younger child. But the truth is I feel comfortable with either.

My Top Pick for School

All UZBL cases are designed for use in a school environment. Both have a clear section on the back for schools to place bar codes or other identifiers. Both also have the option for custom branding with a school’s logo on large orders. I can see where that would help parents and students to track which iPad came from home and which belongs to the school (or similar issues).

Both cases are sturdy enough to withstand being hauled around from school to home in a kid’s book-bag—the screen protectors are one of the main reasons I feel confident saying that. There isn’t a bad choice between the two, but the Shockwave felt the most protected to me. If I wanted the most protection for my iPad, I would choose the Shockwave even if it is not quite as slim.

If I was looking for a well protected, but slim case, I would absolutely choose the Rugged Folio. I can absolutely see where the sleeker folio would be preferred—it would take up less space for storage and student’s or teacher’s bags. 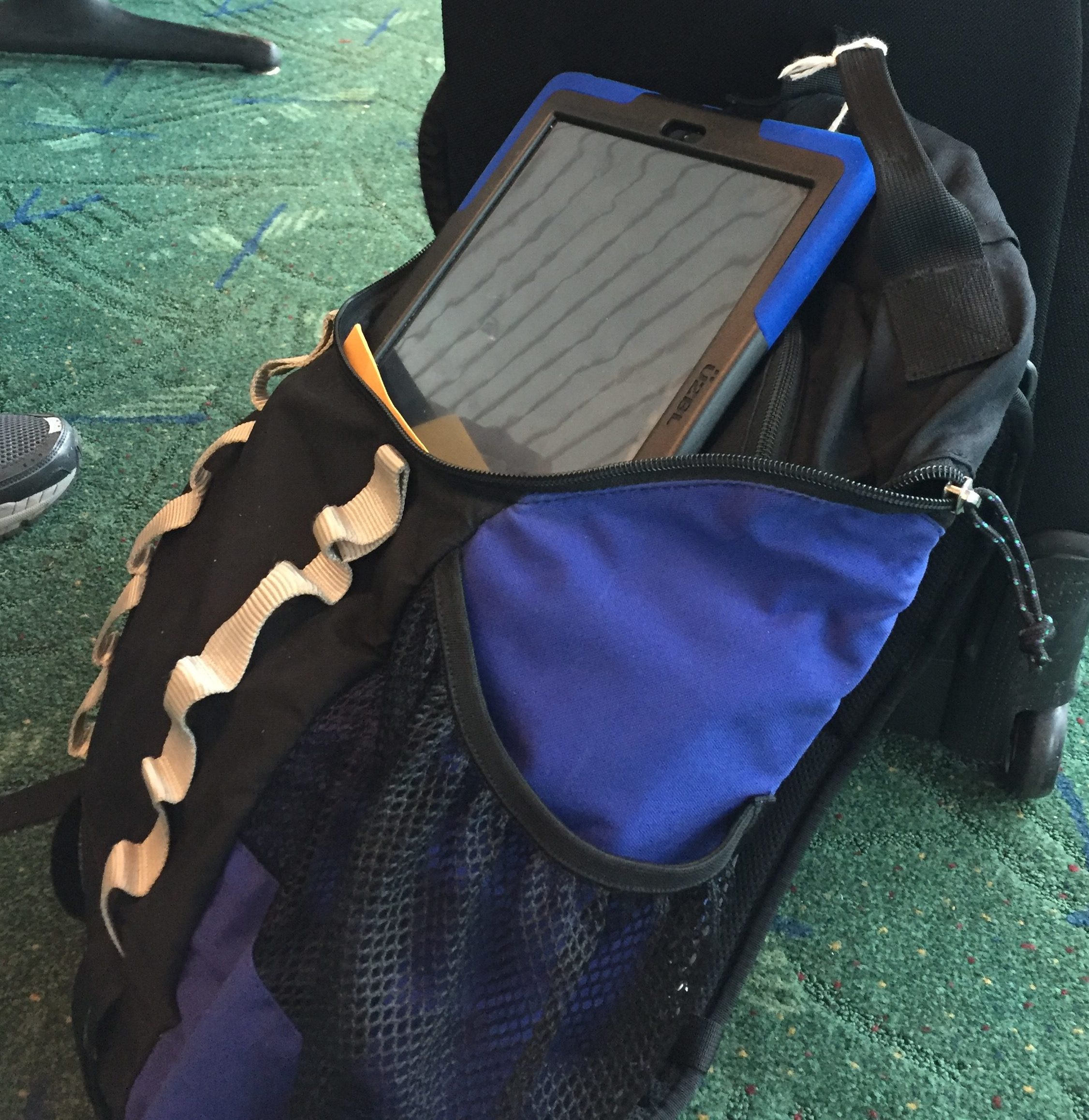 I had the opportunity to take a trip while I was trying out these two iPad cases. I originally planned to take the Rugged Folio because it would take up less space in my carry-on. But once I had tried both cases out at home in the week before the trip, I chose to take the Shockwave. I knew it would hold up to being tucked into a  bag and hauled around without the iPad getting beat up. In the end, I didn’t even notice the extra size despite my original concern.

I tend to put my things through hard use, even my electronics. I use them all of the time, carry them around and hand them off to my kids. The ultimate protection for the iPad is what I look for most in a case. The Shockwave is the case I see myself continuing to use on a day to day basis.

UZBL cases are drop tested and built to last. They were without a doubt the most sturdy and protective iPad cases I’ve ever used. Which makes them a great fit for students or households where children will be using the iPad.

Over and above the protection these cases provided, the cases come in beautiful colors and manage to provide protection without blocking any of the audio from the iPad speakers. This was a big deal to my daughter given that she uses it for games and cartoons. I imagine many students and kids would feel the same way.

For a sturdy, rugged case that can take the hard use of kids or lots of travel, I would definitely choose an UZBL case. Both cases would be a great option for a school looking to protect their iPads and keep them free of dings, scratches, or other damage that happens with frequent use—especially frequent use by kids. They are worth the investment!

Explore more of UZBL‘s Cases on their site, or buy on Amazon.

Elizabeth Voyles is a freelance writer and blogger specializing in parenting and family topics. She also operates a daycare for infants and toddlers. In between writing gigs and running her daycare, Elizabeth enjoys playtime with her two daughters and binge watching shows on Netflix.