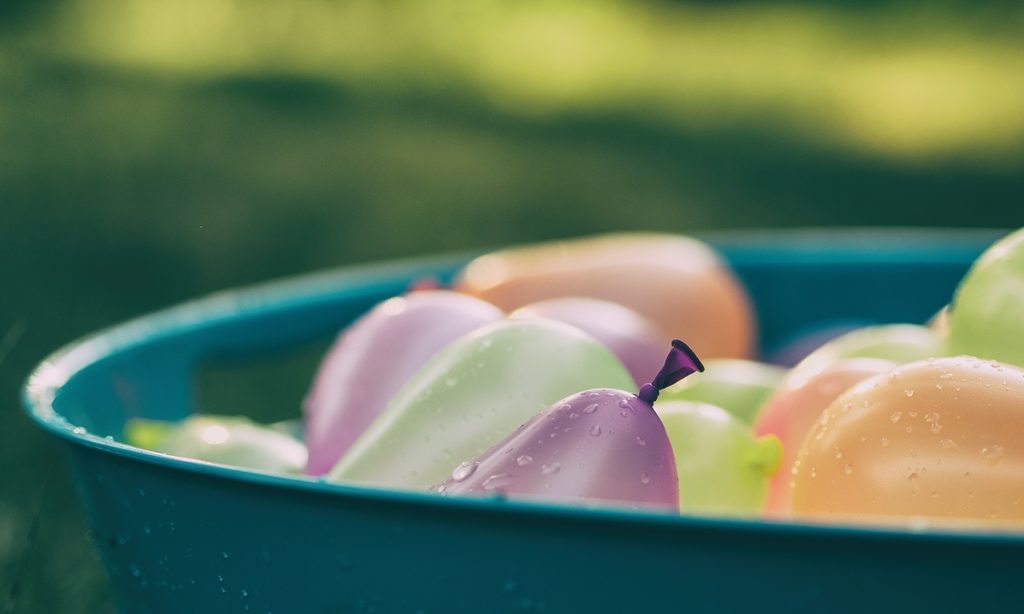 This week, my kids and I were very excited to try out our new water-testing kit. The older two (ages seven and five) love science, AND they drink a great deal of water, so this was the perfect experiment for us to work on together.

Test Assured’s 4-pack Kit for Schools and Science Fairs comes with four tests, which are to be used to evaluate four different samples of water. For each sample, test strips are provided to detect substances such as iron, nitrates, copper, chlorine, etc. Once each strip has been dipped into the sample, it can be compared to a color chart, which indicates how much of each substance is present in the water.  Instructions are included within each of the four tests, and there is also a general instruction booklet that explains why it is important to test for these substances.

This kit arrived in a plain blue box, bearing only the name of the product and manufacturer; no bells or whistles. It was clear that this product does pretty much what it promises: It will provide students with the materials and the instructions to test four water samples. 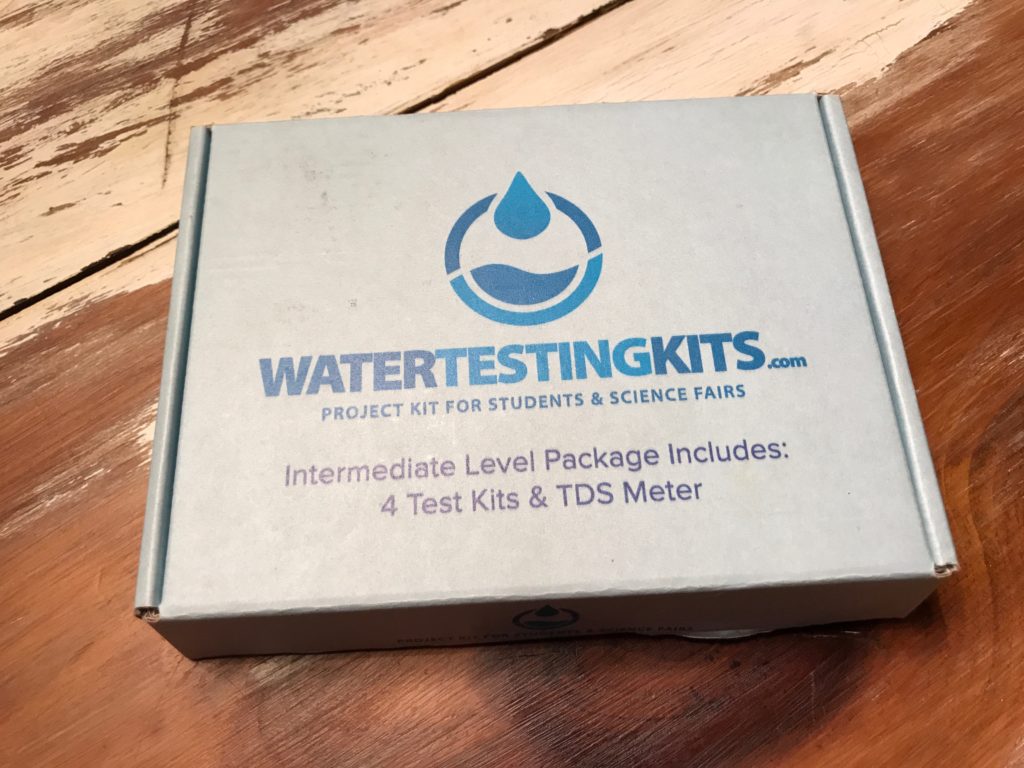 Quite honestly, my kids were not all that excited when we opened the kit, since it was not immediately clear to them that it was intended for kids. Admittedly, mine are on the young side for this kit. Even so, I can’t imagine that the packaging would have great appeal to slightly older kids, either. However, I showed them the containers for the samples, the test strips, and the color comparisons, and I explained that this was genuine, “grown-up” science. This explanation brought them on board.

Since we used our test kits over a long weekend, we were able to check the water in two different locations, rural Pennsylvania and suburban New Jersey. We tested tap water in both places, stream water in PA, and rain water in NJ. The kids were pretty happy with themselves for performing what they considered to be an important civic duty for the residents of these communities.

We began our water-testing journey in Pennsylvania.

The first kit went well, although we did it in the wrong order (I didn’t notice until after the fact that the iron-testing strip was meant to be used last. I take responsibility for the error, but still feel that this might not have been a problem if the instructions had made better use of fonts. This point is made at greater length below.) Apart from the order of testing, however, all went very well. The kids all had an easy time matching the colors, and figured out quickly that, in general, it was better for the testing strips to show relatively little in the way of color, as a darker shade indicates that there’s more of the respective substances in the water. In the end, we were all relieved to see that Grandma’s tap water was safe. Phew!

Next, we tested the stream water. Suffice it to say, you would not want to consume any of this. Since the kids in the past have tried to drink similarly dirty water, I’m glad they got to see good evidence as to why this is a bad idea. (My word on this kind of thing means very little to them.)

Once we returned to NJ, we tested both tap water and rain water—both were fine. Everyone was reassured, and we decided to avoid stream water in the future and stick to tap water. 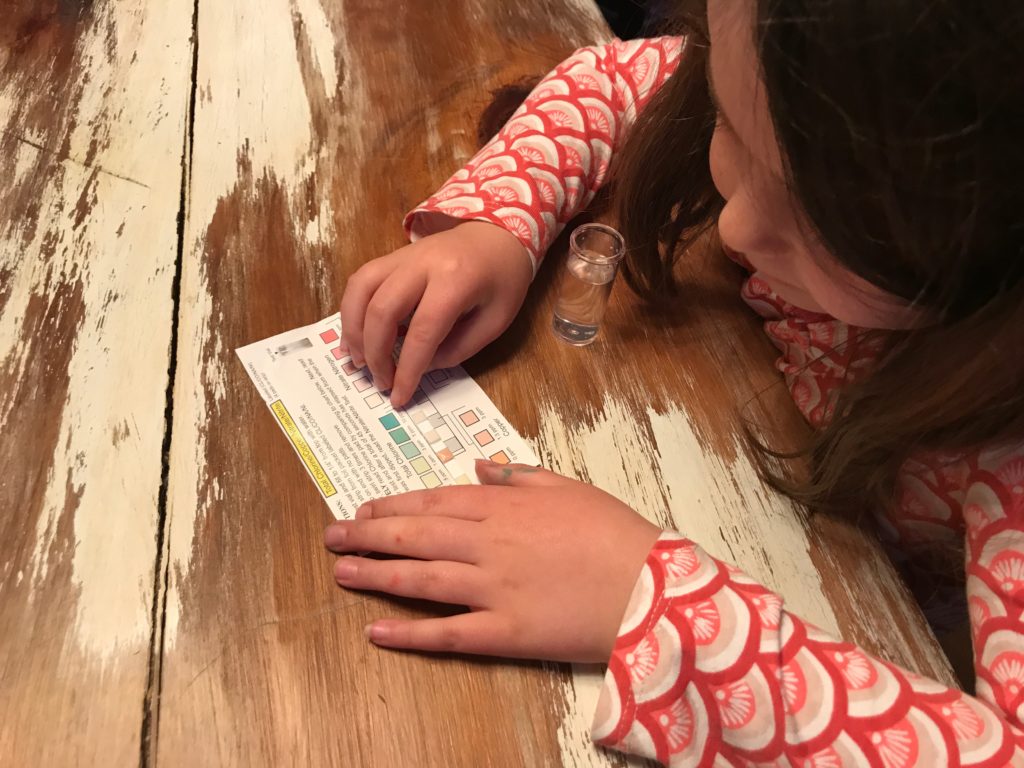 These were a mixed bag. Where the step-by-step, insert instructions are concerned, I felt that they could have been more user-friendly. Although strictly speaking they were written in the correct order, and were without error, they failed to underscore important points or warnings in bold-faced or large font. Instead, they rely on the reader to be disciplined enough to read carefully, which strikes me as a poor strategy when your customers are children and teens. (And their parents, who clearly don’t do much better…)

As for the booklet, the explanations offered as to why it’s important to test for these items were useful, but, again, could have been better.

We read, “Water Alkalinity is a measure of a water sources (sic) ability to neutralize acids. It’s important for helping balance pH levels and neutralize acidic pollution.” Leaving aside the grammatical error, it’s not entirely clear what this means, beyond acids and pollution generally being “bad things” that you don’t want in your water.

I was satisfied with the educational value of the kit. Although it was short on style, the professional and spare look of it offered a sense of authority that impressed my children; they recognized that these were the same kind of testing strips that they’ve seen in doctors’ offices, so it all felt very official.

Although the kit itself did not propose many discussions about the water, it was easy to connect the experiments to several interesting topics. We first talked about why it matters what is in our water, which led to a discussion about safety and pollution.

We ended up talking about the water crisis in Flint, Michigan; about the EPA; and about water as a human right. You can’t really argue with a product that raises those important conversation.

Fun Factor and Ability to Distract

I think it’s fair to say that this is not really a kit that you’d buy if you are only interested in keeping your children entertained.

First, the test strips can only be used once. This is probably important to mention to your children as you set up the kit and prepare to get started. If your kids are like mine, they usually benefit from a dry run before attempting to do something. There’s no opportunity for that here (see above comment about my mistake with the iron strip).

Furthermore, once you use them once, you’re pretty much done with the kit. You can save the booklet for future reference, as it has boxes for your results. But there’s nothing left to do with it.

How To Make It More Fun

That said, it’s up to you to make it a bit more fun.

Here are a few suggestions:

Yes, although I would advise parents to be prepared to put in some legwork to make it a little more fun. This package provides the basics (which is, in fairness, all it promises), so you might need to do a bit of work to make the project come to life.

Although the instructions advise keeping the project away from young kids, I found that the testing kit can be adapted for various ages.

For example, my three-year old could not explain to you why water shouldn’t have much iron, but she could now tell you that clean water is important, and that the backyard stream may not be good for drinking.

My five-year old could discuss iron levels with you, and my seven-year old has a few things to say about EPA funding.

Older children, of course, will get more out of it, but there’s no minimum age for understanding water pollution and the importance of protecting the environment.

If you think your school or group could learn from a discussion about water, then check out TestAssured.com

Cate is a mom of four young children, aged <1 through 7. She has a PhD in Education, an MA in Classics, and another MA in Ancient History. She currently works as a writer, researcher, and curriculum developer, focusing on empowering children in low-income communities. In her spare time, she enjoys reading, running, and meditating over a flat white.