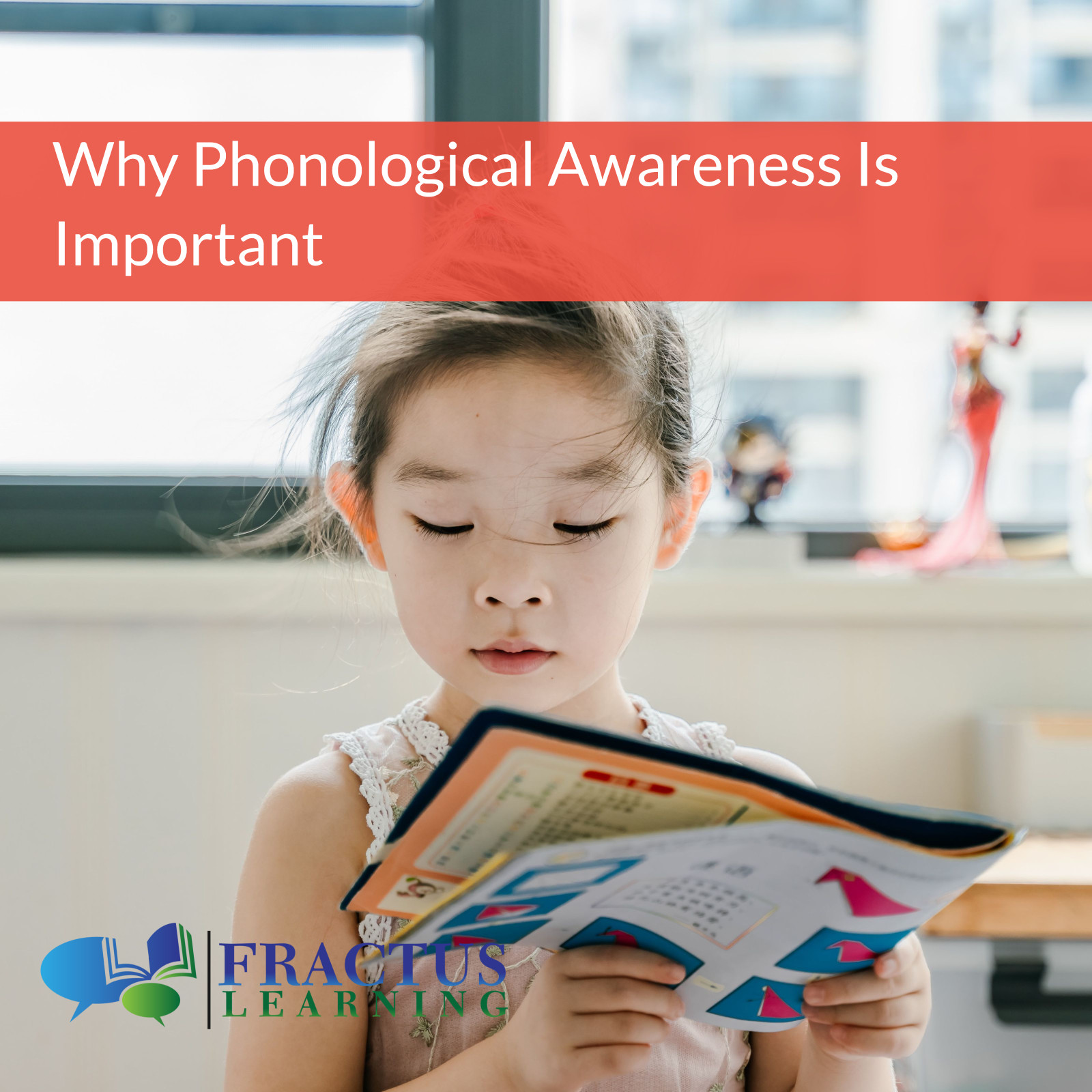 If you want your child to read, teach them phonological awareness.

What Is Phonological Awareness?

Phonological awareness is the understanding of how oral language can be divided into smaller components and manipulated. (Chard and Dickson, 1999) It is a reading readiness skill that helps a child hear the sounds of orally spoken words before learning to read. The child with phonological awareness skills hears,  recognizes, and manipulates orally spoken parts of a word.

Word awareness is to hear words as a unit of sound. Children with word awareness understand that a sentence consists of individual words, leave spaces between words when they write, and say one word when they see one word in written text.

Rhyme awareness teaches children sound patterns that help them learn and apply phonic skills. A child’s future reading success is predicted by their ability to play with rhyming words.

Syllable awareness breaks words into chunks of sound. Children count the syllables in a word and differentiate between single-syllable words with one vowel sound and two and more syllables.

Onset and rime awareness break syllables into smaller sound sections. The initial sound is the onset, and the last word part is the rime.

What Is The Difference Between Phonological Awareness and Phonics Skills?

Awareness of oration sounds, rhymes, and syllables forms part of the phonological awareness skill, whereas mapping phonemes to letters is a phonics skill.

Why Phonological Awareness Skills Are Important For Reading And Spelling

Phonological awareness is essential for reading and spelling skills because spoken words correspond to written words (Ehri, 2004; Rath, 2001; Troia, 2004). Readers must be aware of the speech sounds that letters and letter combinations represent to move from a printed word to a spoken word (reading) or a spoken word to a written word (spelling) (Moats, 2010).

Children learn early to comprehend sounds and develop an awareness of syllables; understanding the spoken language helps them hear and understand the words they are learning to spell. It also helps combine sounds from words they are reading now to words they have read.

Phoneme Awareness For Learning And Using The Alphabetic Principle

Phonological awareness helps children grasp a firm foundation of the oration sounds in words they will need to learn to read and write. The written language consists of 26 alphabet letters expressed in 44 speech sounds. Phonological awareness also helps with reading other writing systems like Japanese or Chinese.

In the English language, the alphabet writing system features letters that, single or combined with other letters, represent single speech sounds. Children who have mastered the basic level of the alphabet system can divide the words into sounds, recognize their identity, and combine them again. Without phonemic awareness, students may be baffled by the alphabet system and why it represents the spoken word, and they may not even know what the term sound means. Students without phonemic awareness may not even know the difference between the letters W or D and T.

The National Reading Panel Report (National Institute of Child Health and Human Development, 2000) found that phonemic awareness at the beginning reading level and knowledge of alphabet letters are excellent indicators of how well children will learn to read during the first two years of formal reading instruction.

By testing a child’s awareness of spoken sounds in words and knowledge of letter names, sound-symbol correspondence, and vocabulary, an elementary school teacher can estimate whether the student will be a poor reader or a fluent reader at the end of 3rd Grade and beyond.

Phoneme awareness is an integral part of learning to read because phonemes help children understand the meaning of words. Students who are aware of phonemes are better readers than students who are not.

Phonemic awareness instruction helps students learn how letters correspond to sounds. It helps them learn the alphabetic code faster. When you learn how to pronounce words correctly, you’re learning how to read them.

In 2019, NAEP (National Assessment of Educational Progress) scores revealed that only 35% of 4th graders and 34% of 8th were considered proficient readers. The two main reasons are that students in primary grades aren’t explicitly taught phonics and phonemic awareness or the basic levels of segmenting sounds and blending sounds. They’ve learned to memorize words as a whole without a strategy enabling them to read new words or comprehend what they are reading.

How To Teach In The Real World

Word awareness is the easiest phonological awareness skill to learn. A word awareness activity teaches children to identify words as a sound unit in a sentence.

Rhyming is when two words have the same sound at the end of the word. Most parents, kindergarten teachers, and elementary school teachers are already doing rhyming activities with the kids.

Words are the largest and syllables the next largest unit of sounds. Children break words into smaller sections by hearing and counting the syllables.

Onset and rime skills precede phonemic skills. Onset and rime awareness determines how well a child hears the onset, the initial sound, and blends it with the rime, the rest of the word.

What is Phonemic Awareness?

Before children can understand the written language, they need a strong understanding of the spoken language. Phonemic awareness skills are one of the most critical aspects of phonological skills. Work occurs at the phonemic level when readers blend the phonemes they hear to make a word.

What Are The 6 Phonemic Awareness Skills?

Phonemic awareness is the ability to hear the sounds within the words, not written letters. Phonemes form the sound system of a language. For example, the word cat has three phonemes (c/a/t), and so does the word bike (b/i/k). There are six phonemic awareness skills; the first three are more straightforward to master than the latter.

If your child has reading difficulties because they are struggling with phonemic awareness, listening games can help them.

What Can Affect A Child’s Phonemic Awareness Skills?