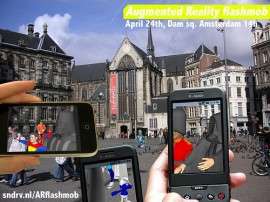 Although it is still in the early stages of development, the gradual growth of accessible apps like Aurasma are starting to make augmented reality in the classroom seem like it might soon become…well, a reality!

What is Augmented Reality?

Augmented reality really does what it says on the tin – it’s reality, but improved! It provides a unique way of adding a digital overlay to the real world around us, enabling users to interact with their real-world environment in new and enhanced ways using technology.

Handheld devices like tablets and smart phones allow users to view their immediate surroundings using video and photographs. This information (or sometimes another prompt such as a GPS signal) then connects to online ‘tags’ or prompts that other users have programmed to make text or videos appear when a particular object or image is seen or a particular location is reached.

Augmented reality has a huge amount of potential for use in the classroom as it creates new and exciting ways for students to interact and engage with their surroundings and materials.

Teachers can use Aurasma to create a kind of semi-virtual, semi-reality scavenger hunt. If students visit a museum, or go on a field trip, for example, teachers can pre-programme clues, pieces of information or educational videos to appear when they snap a picture of a certain exhibit or location. Picture, for example, a class trip to an art gallery. When students use their mobile devices to take a picture of a particular statue or work of art, information about the artist or the historical context could be immediately made available to them.

Or, whilst exploring a historical site, students could use educational ‘clues’ found at each point of interest to direct them to the next step in the tour!

There are a host of exciting uses involving student content creation and curation too – students could create exciting projects or homework assignments that incorporate pictures with overlaid dialogue, speeches or music. An essay on Shakespeare, for example, could include a photo of a particular scene being played out which, when viewed using a tablet or other device plays a live recording of the student reading out the lines from that scene!

The concept of augmented reality also presents exciting possibilities for student collaboration – from adding and contributing extra information and context to one another’s projects to swapping classrooms and leaving behind a digital footprint of information and progress. Imagine if every student starting in a new class could point their smart phone at the desk they are going to occupy for the next year…to reveal a virtual image of last year’s occupant with a recorded message of support and encouragement! The possibilities are endless…

How have you seen Augmented Reality used to good effect in learning? Do you think we will see AR becoming a standard feature in the classroom?

Laura is a writer and recent Cambridge graduate with particular experience in the area of education technology. She has worked with a variety of different education companies and is active in the 'edtech' community on Twitter, so she prides herself on always being in touch with the latest developments and exciting new tools in e-learning.