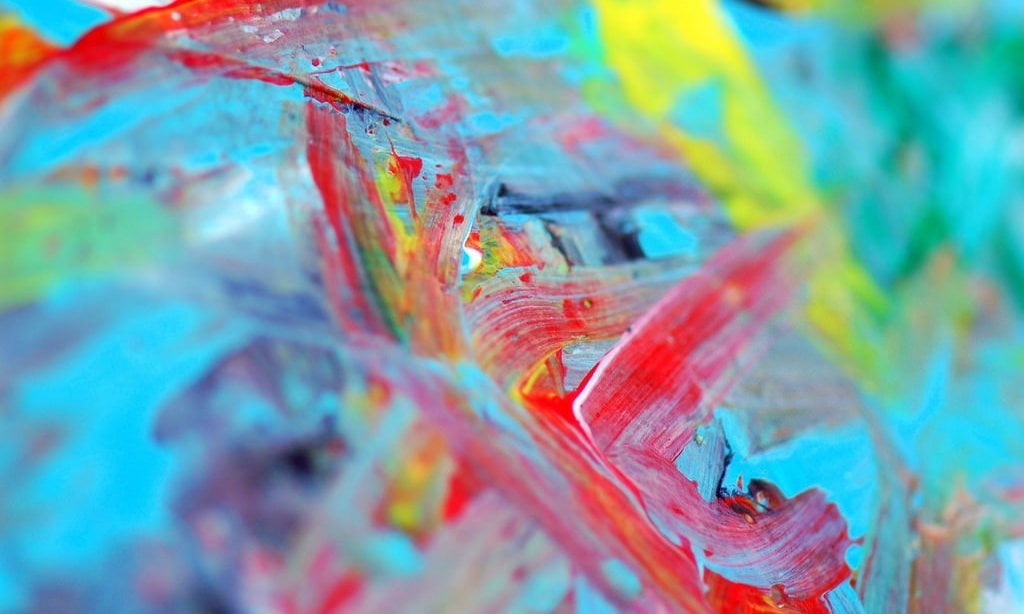 Creative pursuits like painting and drawing benefit children in a number of ways. While art games help to develop artistic skills, they also help develop language, social, cognitive,problem-solving, and motor skills. Art allows children to use their imagination and engage in hands-on activities. It also encourages self-expression that doesn’t require verbal communication.

While on the surface art games may appear silly, they implement all of these skills in a fun and entertaining activity that the entire family can enjoy. 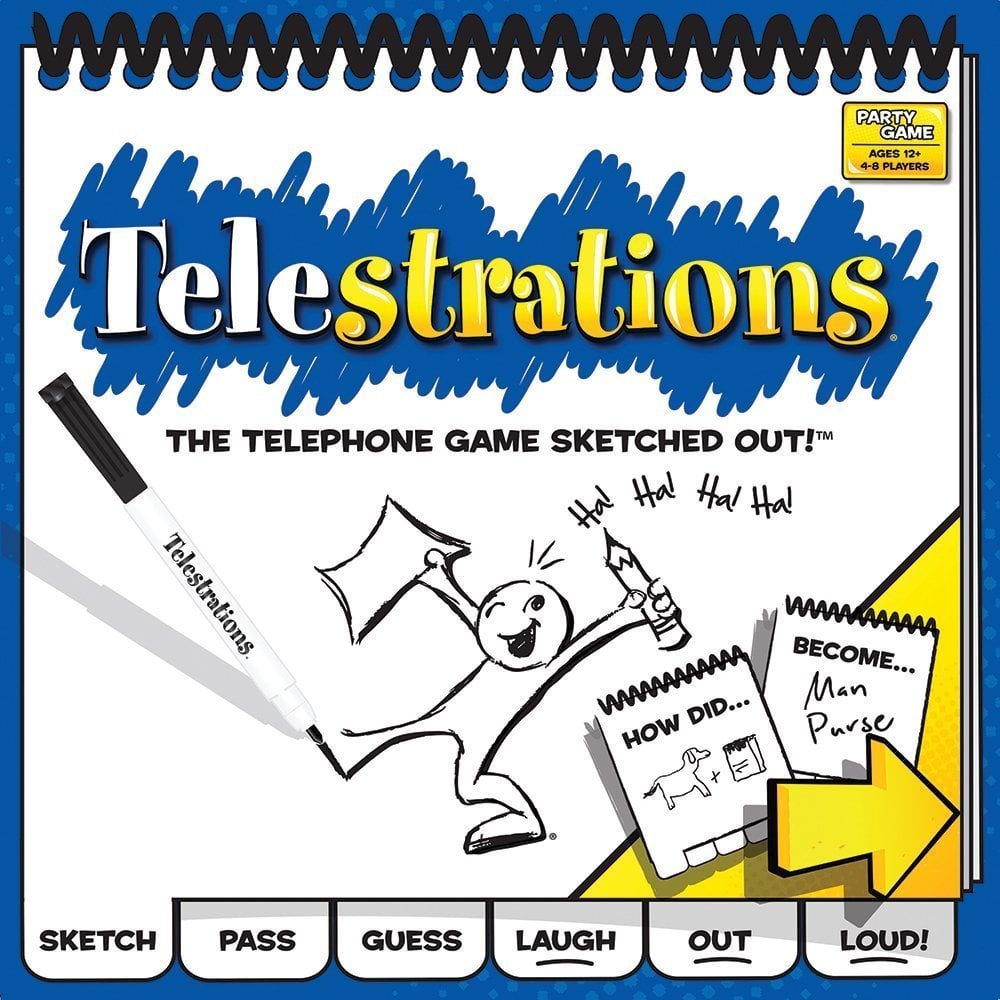 Telestrations 8 Player – The Original game doesn’t require any real art skills, just a sense of humor and a willingness to try. Telestrations encourages artistic expression and lots of laughs.  Each player has one of the included erasable sketch books, a marker, and a word card. A roll of the dice indicates each player’s secret word. The player has 60 seconds to draw their word before they must pass their book to the next player. That player then guesses the word (in letters) and passes the book again. Now each player draws the guess word. The gameplay continues until each book arrives back at the original player. One by one, each player shares their book. The outcome is like the game of ‘telephone’, which ultimately causes hilarious miscommunication. A fantastic game for family game night or as an icebreaker at parties! 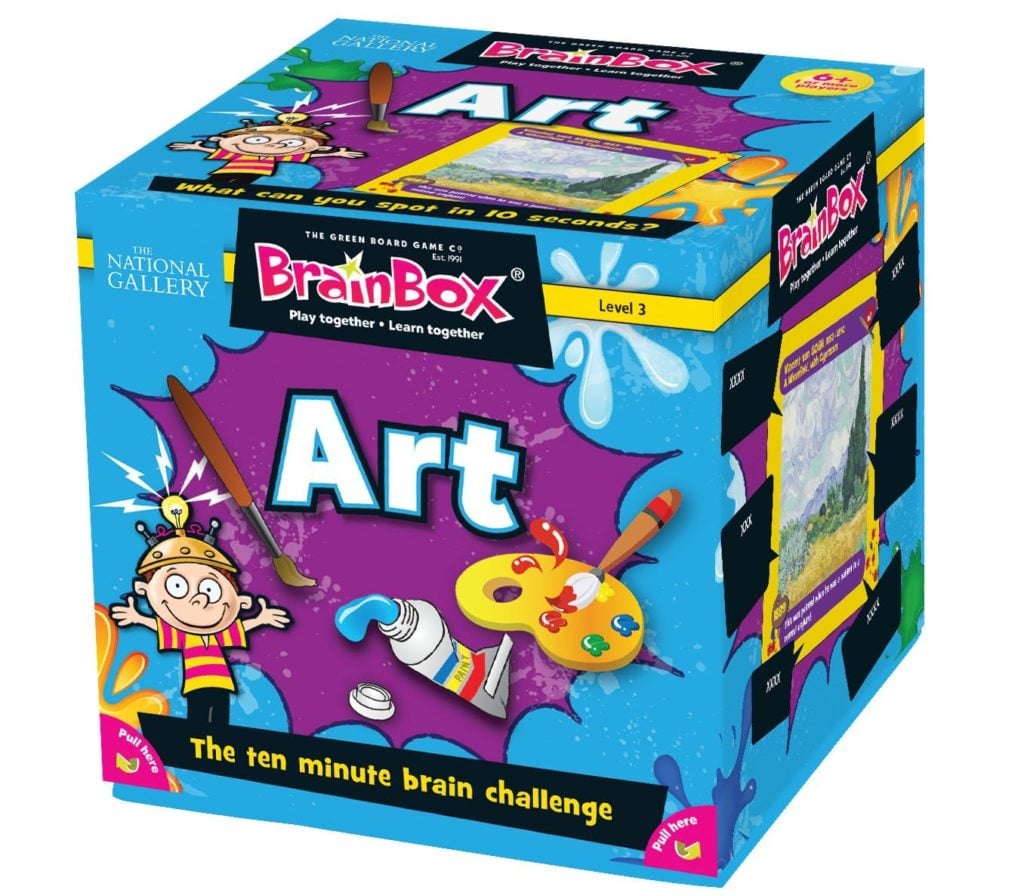 In the BrainBox for Kids – Art Card Game players don’t have to draw anything on their own, instead, they must observe a piece of art and attempt to remember as many details as possible. The game includes 55 games guards beautifully illustrated with famous works of art and the artists who created them. Using a timer, each player has 10 seconds to observe a card. When time’s up, they must answer a question about the image, located on the back of the card. If they answer correctly they get to keep the card. Wrong answers go back in the deck. At only ten minutes, gameplay is relatively short. The player with the most cards at the end of ten minutes wins the game. Of course, you can make the game as long or as short as you like. Brainbox’s Art Card Game encourages concentration and observation as well art appreciation. 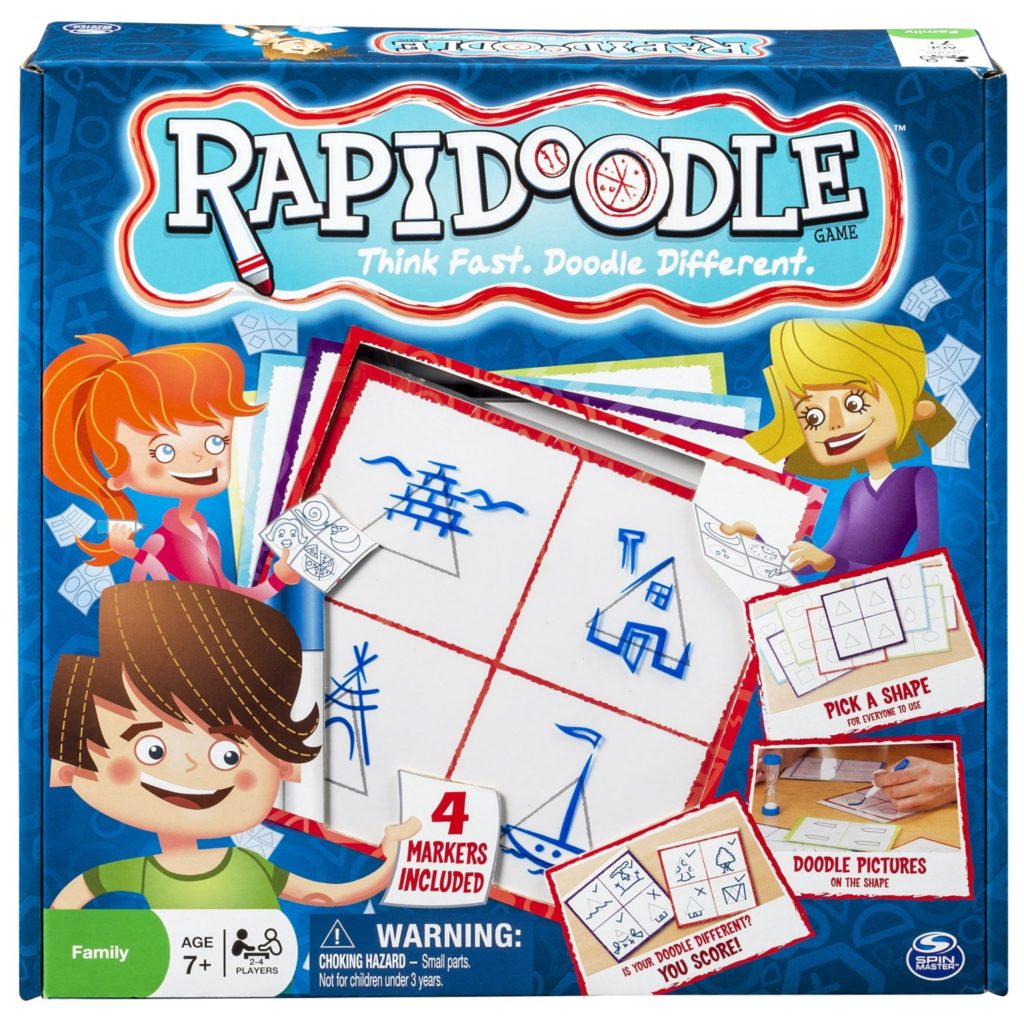 One of the art games that focuses on creativity and originality, Spin Master Games – Rapidoodle Board Game is a fast-paced picture drawing game. Each player receives a card with the same four shapes, Then, they have one minute to use their imagination and a dry-erase marker to turn each of those shapes into something unique. At the end of the minute, the cards are scored. If one (or more) of a player’s drawings is totally original and no one else drew the same item, that drawing scores a point. The player with the most points at the end of the game wins. Everything needed to play is included. Just bring your creativity! 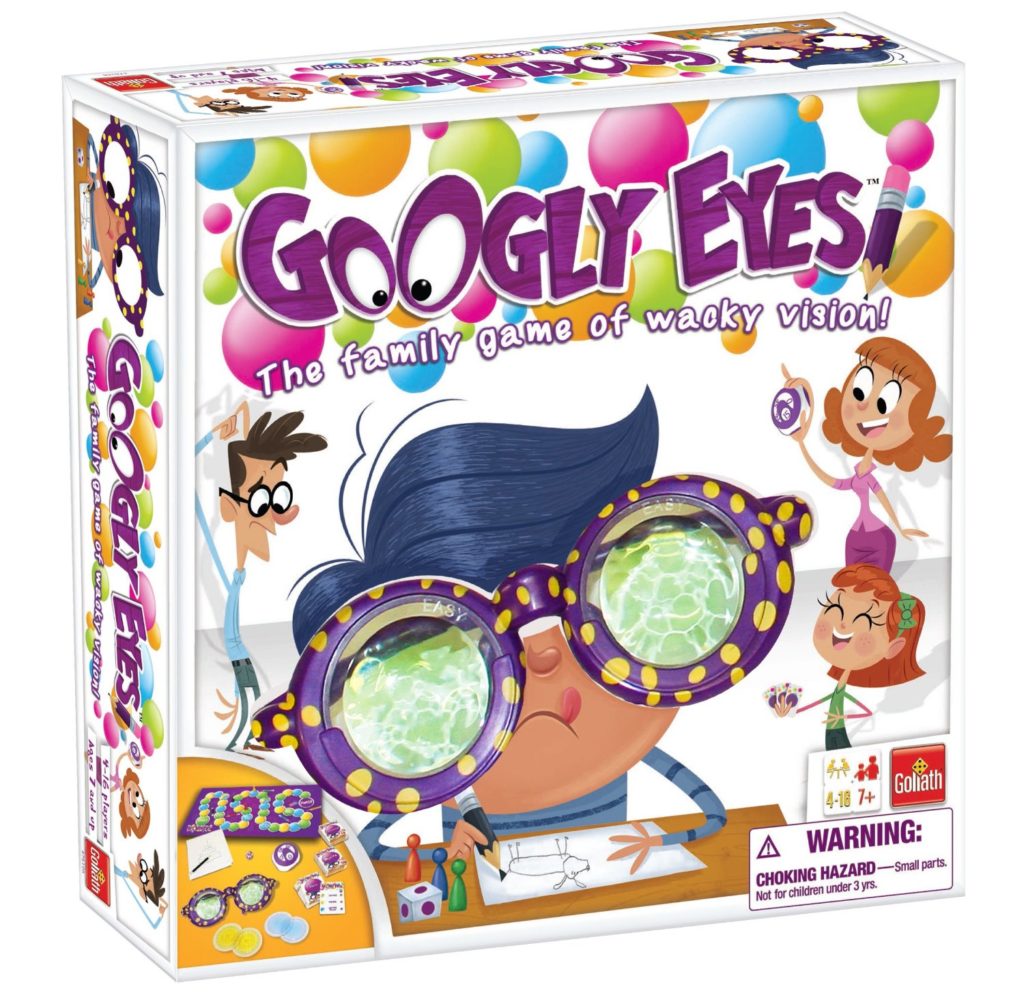 Googly Eyes Game – Family Drawing Game with Crazy, Vision-Altering Glasses is a hilarious twist on family art games. It’s like Pictionary with funny glasses. One player from a team rolls the dice and moves the game piece on the board. Depending on the color of the space, you put on the Googly Glasses that correspond with that space. There are three levels of glasses ranging from easy to hard. (‘Easy’ glasses have the least amount of distortion.) Then, the player draws a card and must sketch a picture of whatever is on the card. After a correct guess, the team rolls again, with another member challenged to draw. The first team to reach the finish line wins. Completing an entire game takes quite a bit of time, so consider breaking it up into smaller sections, or play for points for a pre-determined length of time. 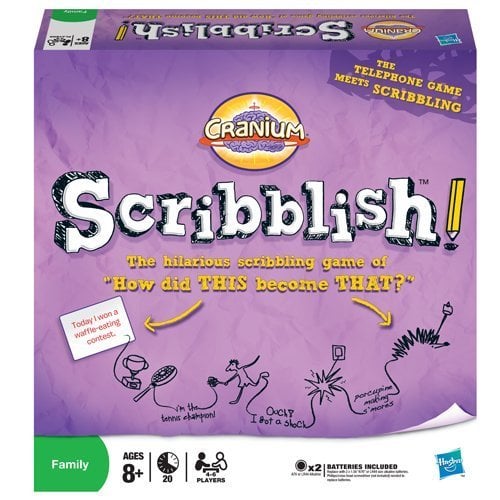 From the makers of the popular game ‘Cranium’, Scribblish is fun drawing game with a few surprises. Gameplay is a little complicated, especially for younger kids, but kids eight years and above will enjoy playing this game with their family. To begin, each player chooses a card, then draws what is described on that card. Next, the drawings are  passed to another player (determined by a dice roll). The next player must describe the picture with a caption. When passed to the next player, the first drawing is covered they must draw something based on the caption and so on. After the cards make their rounds through everyone, players are rewarded for identifying their original card and for the funniest drawing and caption. It’s a hilarious family or party game that requires no real artistic talent but rewards creativity. 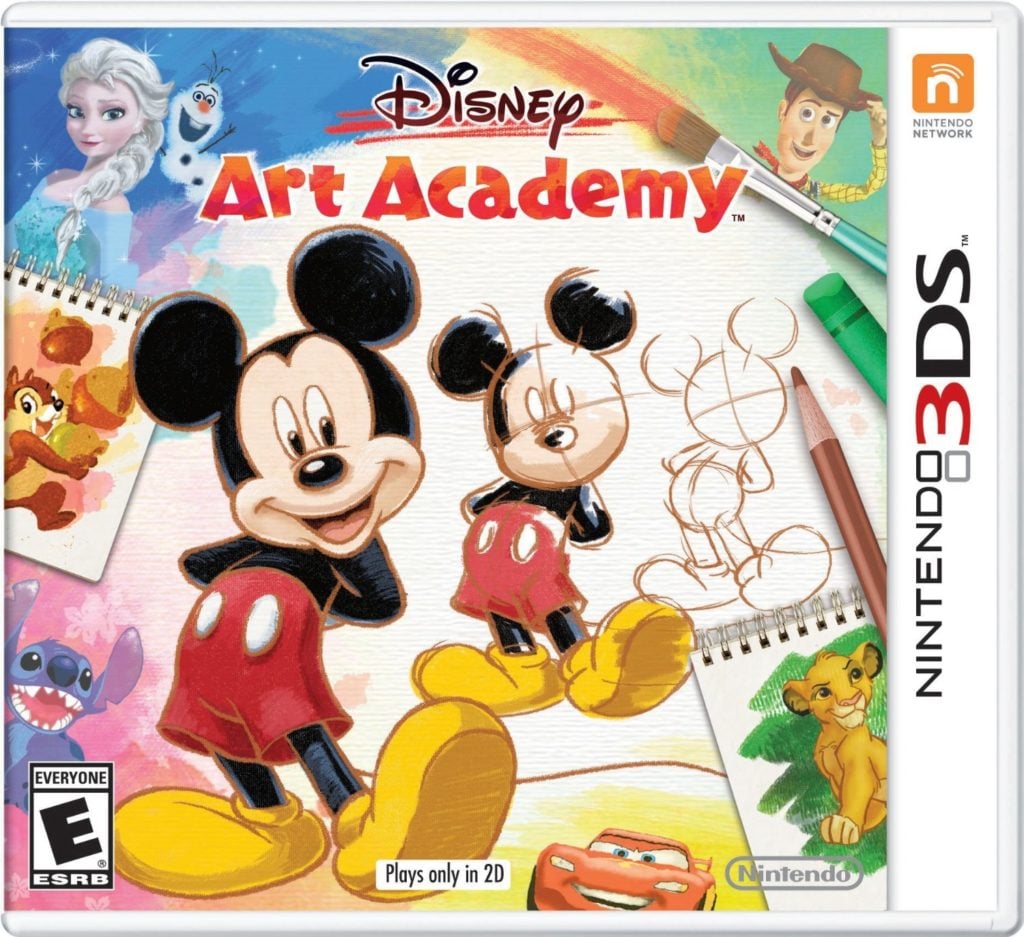 There are several art games designed for the Nintendo DS platform, but Disney Art Academy – Nintendo 3DS is a resounding favorite. The game takes the player step-by-step and teaches them to draw 80 popular Disney characters. Elsa and Olaf are there, and Mickey, of course! Players use the Nintendo DS stylus to emulate drawing tools such as paint brushes, markers, and pastels. The game encourages artistic skills and creativity with recognizable characters and engaging gameplay. 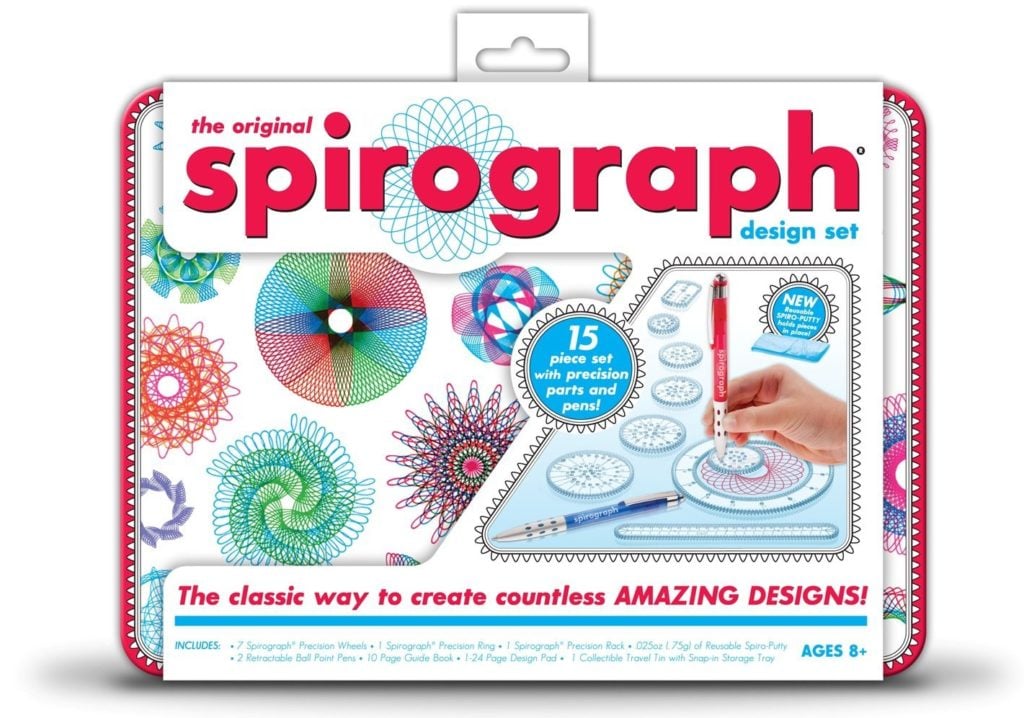 Not one of the competitive art games, the Spirograph Design Tin Set is a beloved and easily recognized game. I can remember playing with my own spirograph as a child, and have given this exact set to both my young niece and nephew. They both love it! The conveniently boxed set includes 7 wheels, 1 ring, 1 rack, Spiro-putty, 2 pens, a 10-page guidebook, design paper, stored in a collectible tin with snap-in storage tray. Young artists use the wheels and gears to design and draw beautiful spiral designs.

Games of Art includes seven classic games played with four included dry erase markers. Gameplay for individual games ranges from 15 to 60 minutes – great if you have only a few minutes to play and fun for an entire afternoon. Games are played on erasable laminated pages that can be used over and over.  Each game is based on works of the iconic modern artists Piet Mondrian, Paul Klee, Joan Miro, Robert and Sonia Delaunay, Jean Arp, Ferdinand Springer, and Victor Vasarely. Games of Art is the creation of Sid Sackson, a remarkable and prolific game designer.

Based on the popular app of the same name, the Zynga Draw Something Game is simple and fun. While one player draws, the other players shout out guesses for the drawing. The first correct guess earns that player a coin. The first player to earn 15 coins wins the game. Though players take turns drawing, everyone is playing at the same time – it’s rowdy, fast-paced, laugh-out-loud fun.

We love to hear from you! Tell us about your favorite art games in the comments below.