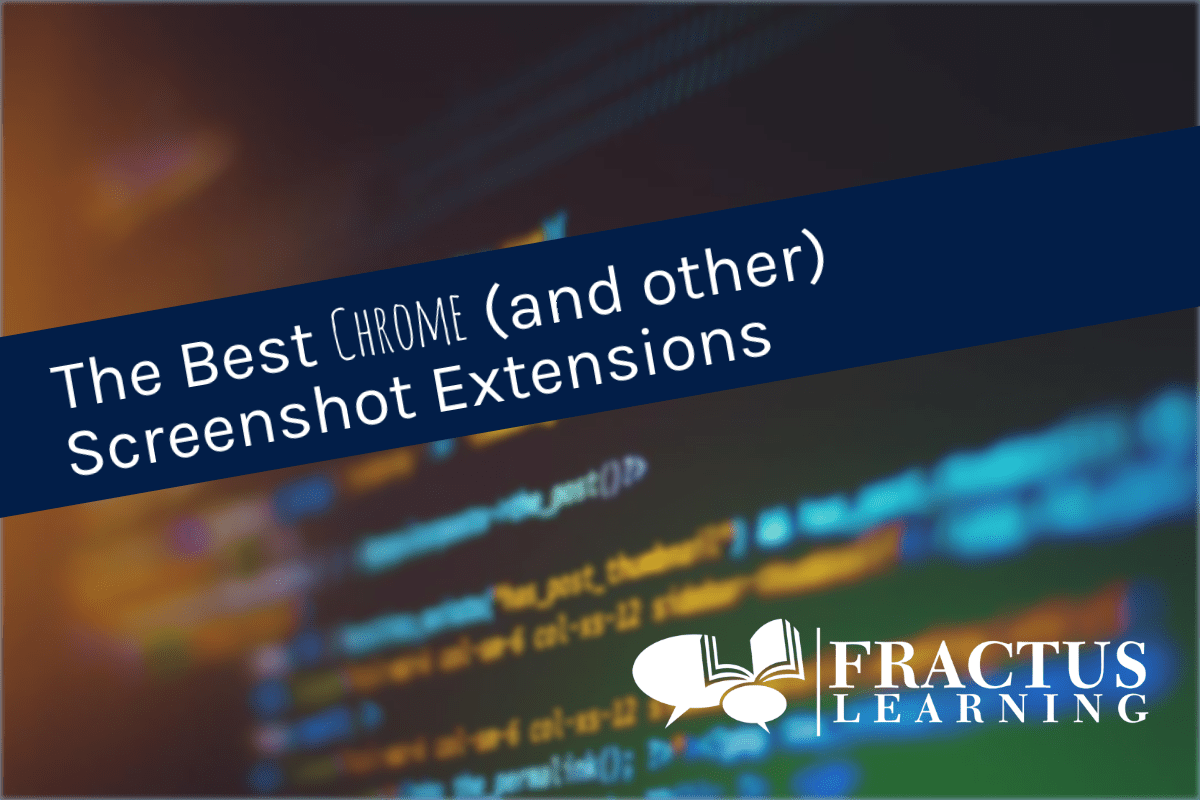 Google Chrome screenshot extensions allow users to take screenshots of a partial or full web page. It is a convenient tool for the classroom, business, or individual use. A screenshot of your desktop, a web page, a social media post, or a screen recording video help show or demonstrate to colleagues, peers, or students what you want to convey by using these images or videos. Technicians may often request you to take screenshots of the issue to understand the problem they need to solve.

You may take screenshots using the computer keyboard shortcuts (Cmd + Shift + 4 on a Mac and PrtSc button on Windows). However, it could be frustrating capturing the menu buttons in the webpage screenshot or a screenshot of the visual screen when you wanted a full-page screenshot, including the entire article without ads. It would help if you had an additional editing or snipping tool to fix the screenshot.

Who has the time for such a laborious process when the Google Chrome web store offers Chrome extensions that can do what you need within seconds? Here is a list of the best Chrome screenshot extensions with easy to use features to select the best productivity tool for your needs and task.

Lightshot, as the name indicates, is one of the fastest screenshot apps for capturing a screenshot. Novices and users who quickly want to capture a screenshot may appreciate the easy to use interface.

By clicking on the Chrome extension, the screenshot opens in a new tab where you select the section of the page you want to capture. Use the editing tool for instant editing before saving the screenshot to your computer or cloud storage. If the saved image is not to your satisfaction, you may always edit the online editor’s screenshot.

The Lightshot Chrome extension also features the option to search for similar images online and share your captured screenshot on social media.

With over 2 million users, the Awesome Screenshot Full Page extension is one of the best screenshot extensions with video screencasting features. It does not limit the screenshot to the part of the web page the user sees on their screen. The ability to scroll and take webpage screenshots of the entire page makes it an awesome screenshot extension.

Awesome Screenshot is also a screenshot screen video recorder that record screencasts you may use for tutorials, demonstrations, and other uses. After saving the screenshot or screencast to the Awesome Screenshot website, it is instantaneously available to share. Use the unique shareable links to share the videos or screenshots to your team on project management tools like Asana, Trello, Jira, GitHub, or Slack or on social media platforms like Facebook, Twitter, and Gmail.

The GoFullPage Chrome extension captures a full-page screenshot with one click. By scrolling the web page, it effortlessly screenshots the entire page and saves it as an image. The advanced screen capture technology ensures the accurate capturing of full web pages, including complex pages with embedded iframes and inner scrollable elements.

The image opens in a new tab to export it as a JPEG or PNG image, download the screenshot as a PDF document or drag it to your desktop.  Users may crop, annotate, or add their favorite emojis to the screenshot with the premium editor.

The one-click full page screen capture tool was developed in 2012 and called initially Full Page Screen Capture. The name was changed in July 2020 to GoFullPage.

The Print Edit WE screenshot extension features saving an edited web page as a single HTML file or as MHTML, the archive format of a web page. The file can be viewed and edited in the Chrome browser too.

Edit the contents on a web page before printing or saving it as an HTML file; you may customize the page by keeping or deleting individual HTML items. Users may hide, delete, or format elements on the web page, changing it according to their needs. It also removes unwanted sidabars and ads. The preview shows you how the page will look when printed.

A screen capture screenshot or printing of the page may take a little longer than some of the other screenshot Chrome extensions.

Nimbus Screenshot Capture is a Chrome extension complementary to Nimbus Note, a workplace organizer tool. By recording videos or capturing desktop screenshots, you may instantly share content with customers or colleagues. The editing and annotation tools help you present your explanations with greater clarity and effectiveness.

The Nimbus Google Chrome extensions capture full-page screenshots or sections of the web page. The premium version allows you to add a watermark on the screenshot for branding purposes or security against copying your screenshots without permission.

Create screencasts by screen recording videos or with a built-in webcam. You may customize the frame rate and screen resolution. Before sharing the video, use the annotate features to clarify your message with arrows and shapes.

As a Nimbus premium member, you have access to more features; you may crop, edit, add a watermark, and convert the video from WebM to MP4 and GIF format. You may publish the screencasts to YouTube. You can also upload the videos to Dropbox or Google Drive.

The Fireshot screenshot extension was awarded “The Best Free Google Chrome Extension” by PCMAG.com in 2013. Over 2.6 million users capture screens with Fireshot in their favorite web browser. The built-in editor gives users greater control when annotating, cropping, and editing the screenshots.

The friendly user interface helps you customize screenshots of the entire web page or partial sections; you may even include the date, time, and page URL. You may store and organize the screenshots in OneNote, as a downloadable PDF, or save it as PNG, JPEG, BMP, or Gif images.

Take a screenshot with the Blipshot Chrome extension automatically; it is one of the best screenshot extensions for someone in a hurry. When you click on the Blipshot toolbar icon, it captures the full-page screenshot immediately, not just the web page’s visible part.

The entire page screenshot appears as an image to the right of the page. Save the image in PNG or drag and drop it to your desktop. The captured screenshot is saved with a date, time, and page name for convenient reference.

Before you take a screenshot of your current webpage, the 1-Click Full Page Screenshots allows you to edit the contents by temporarily changing the metadata. Edit the text or titles and annotate the webpage with lines, circles, and customized text.

Create PDF documents, thumbnails, or save the image as a PNG to your computer. The screenshot extension offers unlimited storage to store the screenshots online.

ClickUp is more than a screen capture extension; it is a productivity platform incorporating five separate apps in one Chrome extension. Users may take screenshots with the extension, create tasks, track time, capture emails, use the notepad, and bookmarks.

Create tasks with due dates, add assignees, save a website as a task, or add attachments. Improve your productivity by tracking the time it takes you to complete each task. When you bookmark a site as a task, you have the option to capture a screenshot and attach it for reference. You may capture the entire browser tab or part of a webpage to edit, mark up or annotate.

The Chrome extension allows you to capture emails and generate it as an HTML record or attach the email to the task; capture and add comments to the screenshot, or adjust existing edits on the screenshots.

ClickUp is one of the best Chrome extensions if you enjoy having your productivity tools together as one extension.

Good Annotations is one of the best screenshot extensions for taking a screenshot of your current Chrome browser tab and sharing it immediately with friends or colleagues. Capture the screenshot by using hotkeys Ctrl + shift + V or click on the screenshot button. Instead of waiting for the image to upload in your message app, create a shareable link, and send it to relevant parties for easy access on any device.

The editor offers editing and annotation features allowing you to add shapes, text, arrows, borders, and markups to draw the reader’s attention to something specific on the captured screenshot. You may also upload saved images on your computer to the Good Annotations online tools to edit and add elements to the image.

The Screenshot YouTube Chrome extension takes a screenshot of the current video playing. The button is situated on your YouTube video player. Click on the button marked “Screenshot,” and it automatically captures the screenshot.

The screenshot is saved as a file; it can also be copied to the clipboard. The Chrome extension extracts the frame without the player control buttons.

You may capture screenshots of complete web articles with the formatting intact or in a simplified version. Evernote Web Clipper allows you to save the screenshots in specific notebooks relevant to the topic and add tags for better identification.

With cloud sync, the screenshots and notebooks are accessible on all your devices. If you do not want to capture a screenshot of the entire website page, you may bookmark the articles with a URL link and a short description of the webpage.