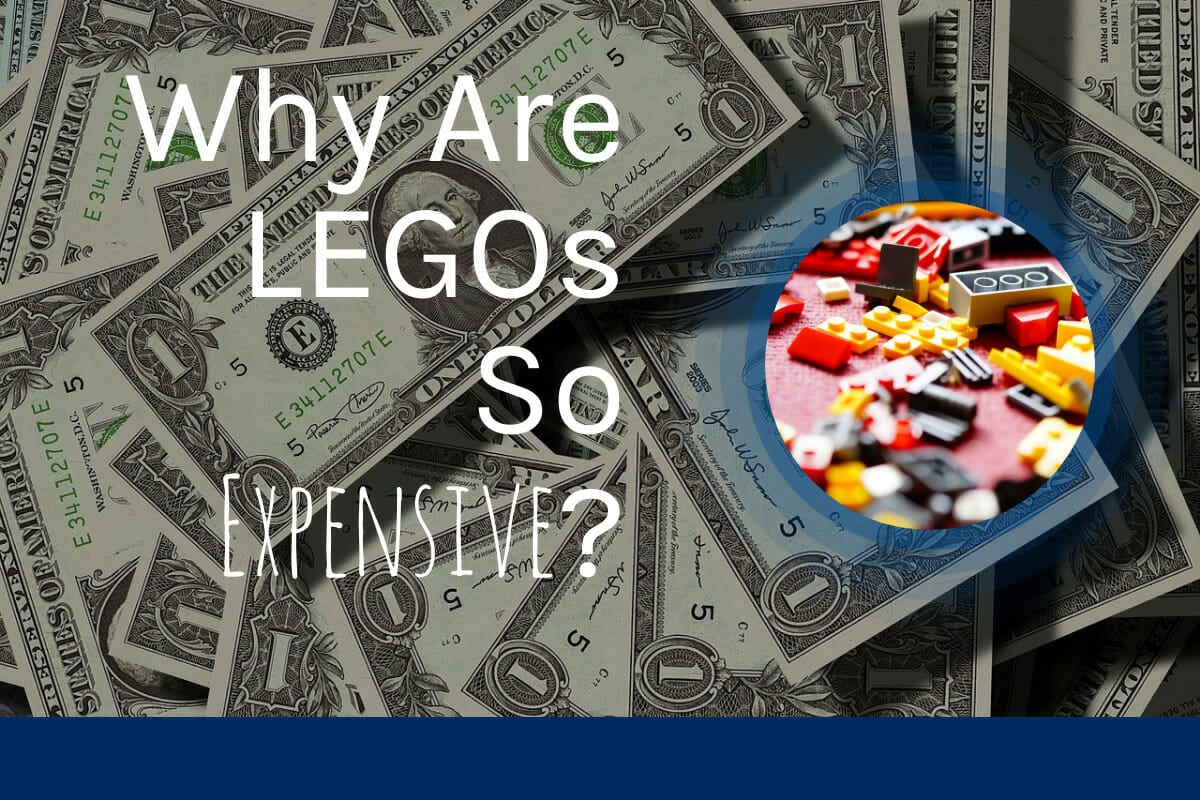 LEGO sets and bricks are not cheap, and your kid’s Christmas or birthday gift list probably contains some LEGO toys. According to National Geographic Kids, about 28 LEGO sets are sold each second during the Christmas season despite being an expensive toy.

People may happily pay more than a car’s monthly installment for one of the best Technic LEGO sets. The LEGO Vintage Airport Shuttle Monorail is priced at $3,988 on Amazon. LEGO Duplo Feuerwehr-Haputgquartier costs $3,151, and the Ferrari LEGO 1/17th F430 Spider sells at about $3,000. Why are the best LEGOS so expensive, and are we paying too much for LEGO toys?

Why the High Price for LEGO Products?

LEGO is known for its precision engineering and attention to detail. Each mold is precise; it is accurate within 0.004 mm, which is ten times narrower than a single human hair. Each LEGO brick has three numbers that indicate the mold’s position and which mold was used to produce it. With the numbering system, a faulty mold is quickly discovered and fixed. The accuracy level is so high that only about 18 bricks in every million manufactured do not meet the company’s exceptional standards.

That is why LEGOS from different sets are compatible with each other. Even a LEGO brick from 1958 is well-matched with LEGO bricks bought today. If a piece breaks or is lost from your favorite LEGO set, LEGO can replace that one element. It is not like a jigsaw puzzle with a noticeable gap where the missing piece should go or a toy that no longer functions because of the missing piece. You do not need to purchase a complete set again, only the missing piece.

Manufacturing millions of LEGO bricks and elements that fit together is something competitors need to overcome. The price tag may be high, but considering that the expensive LEGO toys parents bought their child as gifts will still be playable for their grandchildren and grandchildren’s kids to enjoy.

The number of pieces in a LEGO set influences the cost and, therefore, the price you pay. The price of LEGOS has decreased since 40 years ago. In 1985 a LEGO brick cost about 40 cents per brick; today, it averages 10-12 cents per brick. LEGO sets were also smaller; the content averaged between 500 and 800 pieces in the 1980s compared to the gigantic sets available today.

LEGO Architecture, LEGO Star Wars, and other themes have LEGO sets that contain thousands of pieces. The hard to find Taj Mahal consists of 5923 LEGO pieces and costs about $400 brand new, whereas the 4,016 pieces LEGO Death Star 75159 is sold for about $500.

Receiving LEGOS as a gift is not just getting another toy; it is an adventurous and delightful experience, with educational value, that keeps kids entertained for hours. LEGO is probably the favorite toy brand in the world for many kids…and adults too.

In 2015 LEGO overtook Ferrari as the world’s most powerful brand, according to BrandFinance. LEGO’s excellent marketing has made them the #1 toy brand globally, with an estimated $7.51 billion brand value.

Their marketing secret may be good experiences and happy stories people associate with LEGO. Ask any AFOL (adult fan of LEGO), and they will have a story to tell about their first LEGO experience.

LEGO is dedicated to its mission of inspiring and developing the builders of tomorrow.

Produced in 1979, LEGOLAND Space was LEGO’s first theme, and Star Wars was their first licensed theme. LEGO collaborates with highly popular brands like Star Wars, Indiana Jones, Winnie the Pooh, Toy Story, Harry Potter, and Marvel, which means high licensing fees.  Although licensing fees may form part of the cost the end consumer pays for their LEGO set, most costs come from the number of pieces in a set.

Exclusive rights to brands like Star Wars also means if you want to build a Star Wars building blocks model, it is only available in LEGO. These licenses offer kids the opportunity to develop their favorite stories and relive the movie adventures with roleplaying fun.

LEGO is made from thermoplastic, which is known for its strength and durability. The specific plastic, acrylonitrile butadiene styrene, is a petroleum product. It means the raw material pricing is related to the price increase or decrease of crude oil.

The LEGO molds are designed to endure multiple assembling and disassembling without losing its functionality. You only need to step on a LEGO brick with bare feet to experience its sturdiness.  They are pretty easy to clean as well.

At the Open University, engineers put a 2 x 2 LEGO brick in a hydraulic press to measure how much pressure it can take before it breaks or changes its form. Dr. Ian Johnston discovered that a LEGO brick could withstand 4,240 Newtons, equivalent to 953.1899-pound-force or 375,000 LEGO bricks. Theoretically, the bottom LEGO brick should withstand a LEGO tower 2.17 miles high.

LEGO does not lose its value as a secondhand toy. It may even increase in price.

Are LEGOS Worth More Than Gold?

According to “The Toy of Smart Investors” study by Russia’s Higher School of Economics,  secondhand LEGO may yield a return rate of 11%, which was higher than gold or stocks in 2015. LEGO retires LEGO sets every two years. When these sets are no longer available, their prices in the secondhand market increases, sometimes higher than the retail price the LEGO was sold. The most popular LEGO sets are from the movies, franchises Star Wars, Marvel, and Harry Potter.

The most expensive LEGO brick worldwide, according to the Mirror, was auctioned in 2017 for 12,000 pounds (which is about $15,500).  Only a few of these 14-carat solid gold LEGO bricks exist in the world. Shaped like an original brick, it is compatible with other LEGO sets.

How Much Should You Pay For Used LEGOS?

Used LEGO sets in good condition are generally worth between 50% to 75% of the retail price. Bargains are to be found, and you may even pay as little as 10% of its original price. You may find great buys searching online sites; you may even find that rare LEGO treasure.

If you are buying a batch of unsorted LEGO, you should find LEGOS pricing at $15 or less per pound. If the pack contains multiple elements and desirable pieces, you may pay more. Buying a used collection and taking the time to sort the pieces into complete sets may be worth your while. If a critical brick or element is missing, you could purchase that individual piece from LEGO.

Is There A Cheaper Version Of LEGO?

MegaBloks and KRE-O are the closest competitors to LEGO. Although LEGO is pricier than its competition, it is not that great a price gap. Considering the precision to detail where every LEGO brick fits another LEGO brick, people know what to expect when buying a LEGO set. It may not always be the case with a competitor.

The competition also followed LEGO’s footsteps in acquiring licensing deals, which increased their popularity and prices. MegaBloks owns the rights to the video game Halo, Thomas the Tank Engine, Hello Kitty, and Barbies, whereas KRE-O acquired licenses for Star Trek and Transformers.

LEGO toys may seem expensive, but it is worth every cent if you consider the quality, variety, durability, and joy. What is your favorite LEGO story?