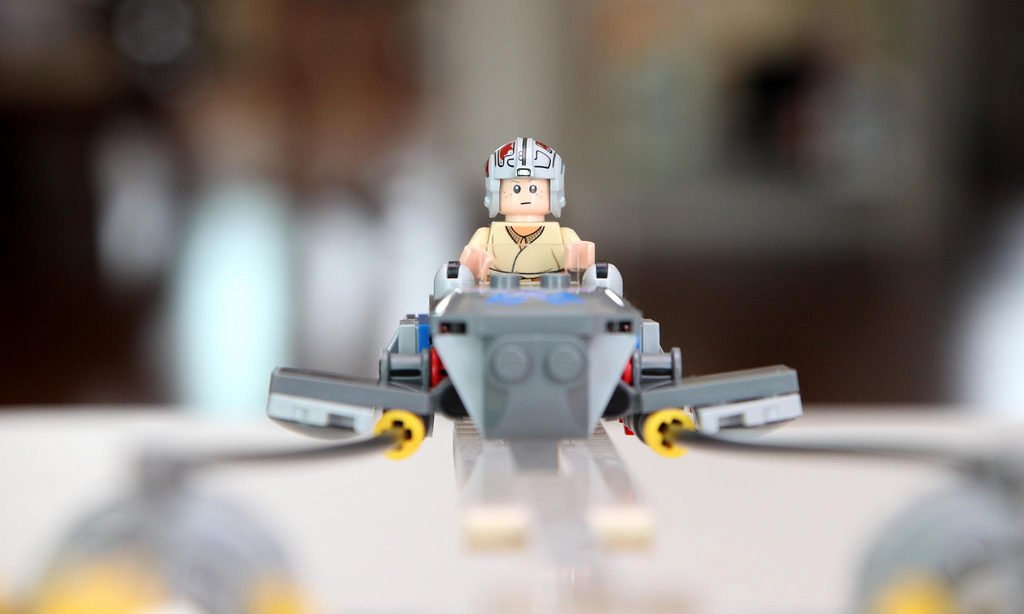 Lego is a classic construction toy for children of all ages. It has been around for many years, but no matter how many amazing gadgets hit the stores, Legos never seem to go out of fashion. As each new generation discovers the best Lego sets anew, a whole new world of fun comes into being. Films and games have inspired many Lego variations, but Lego Star Wars sets have taken Lego to a whole new level of popularity.

Lego Star Wars sets have become the ultimate must-have toy for creative kids. They combine all the fun of the Star Wars franchise with the solid educational benefits we have come to expect from all Lego block construction sets.

Many of the best Lego Star Wars sets are aimed at older kids aged 9 years and above, including one of the best Lego Technic sets of the past 20 years – the Darth Vader 8010. but smaller sets are perfect for younger children. In fact, this is a great opportunity for a parent-child bonding session. Instead of turning on a DVD or handing over the iPad, you and your child can spend a few hours carefully building a Death Star or Carbon Freezing Chamber.

Handling small Lego bricks helps to boost manual dexterity and motor skills, but since many of the Lego Star Wars sets are extremely fiddly your child will need a good dose of concentration. We think Lego Star Wars sets are a brilliantly constructive way to harness the excitement of the films, so here is our pick of fourteen of the best Star War Legos Sets!

The Best Lego Star Wars Sets Your Kids Will Love 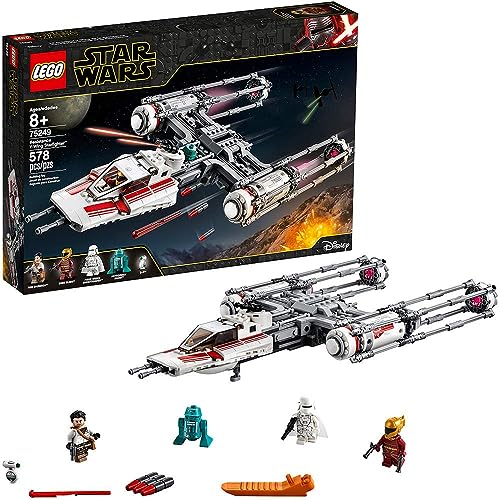 With the red stripes around the cockpit, the Resistance Y-Wing Starfighter 75249 has a sleeker look than its predecessor, the BTL-B Y-wing starfighter introduced during the clone wars. Although it may remind players of previous Star Wars Lego sets, the new Lego Y-Wing Starfighter may have similarities at earlier models but with some significant new updates.

Using many curved tiles results in the curved slopes of the cockpit and the appealing look of the rest of the body.  The cockpit opens, displaying the inside with printed controls and an upholstered seat for Zorii Bliss.

There is no shortage of ammunition. You can load spring-loaded missiles below the engine. Three bombs loaded from above are dropped by turning the gear behind the fuselage. Twin ion canons behind the cockpit can rotate and elevate targeting the opposition. The teal and white Astromech Droid with its metallic highlights fit nicely in the droid sockets. 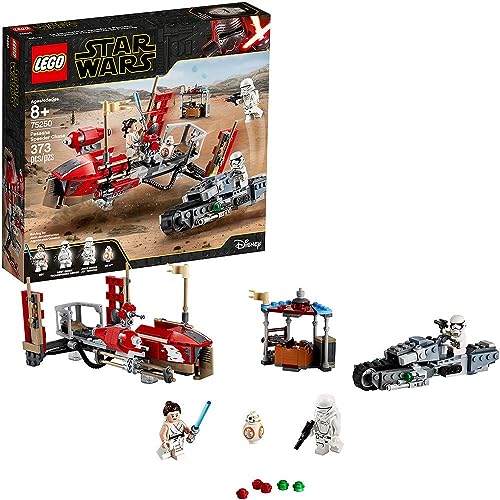 The Star Wars Lego Set, Pasaana Speeder Chase 75250 building kit consists of three pieces: the Treadspeeder for space racing, the Transporter toy jet, and the canopy tent. These are new vehicles introduced in the Star Wars story Rise of the Skywalker.

You may find the canopy tent in some of the best Star Wars Lego sets, but not the two vehicles. Beneath the colorful red and blue roof of the canopy tent, a toolbox with equipment is stored, which can be loaded onto the transport speeder.

Stickers on the front of the red transport speeder give it a wear-and-tear look reflecting its age. The one side features a protective railing and stud shooters while the other side of the transport speeder has more mechanical features. Below are transparent elements that give it a hovering impression.

The First Order Jet Trooper drives the rubber-tracked Treadspeeder bike. It has space for another First Order Troopers behind the driver, and they are ready to engage in battle with Rey, who is driving the transport speeder.

The 373 pieces set is ideal for kids 8-years old and up who are prepared to engage in some Starwalker fun. 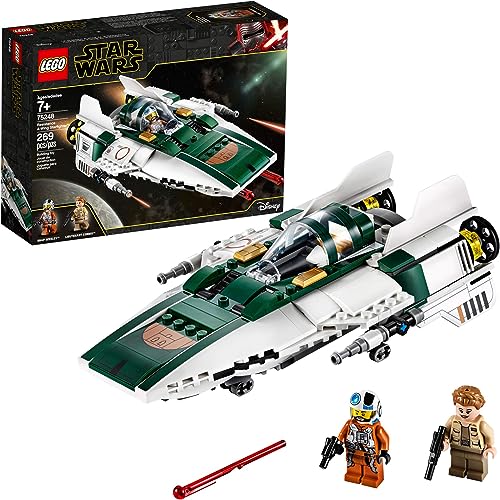 The Resistance A-Wing Starfighter 75248 is one of the best Star Wars Lego sets where it may seem like the previous models but contains surprises in the details. If you were a fan of the RZ-1 A-Wing Interceptor in Return of the Jedi, then you may be delighted with the new Lego A-Wing Starfighter.

The collectable building kit produces a dark green and white A-wing Starfighter with a sleeker look than its predecessors. Placed beneath the fuselage are two spring-loaded shooters. The two buttons on the top to the sides of the cockpit activates the shooters.  Non-firing rotating canons add detail to the impressive fighter.

With 269 pieces in the set, the Star Wars Lego set is challenging enough for 7-years old without being too complicated. After they have completed the Lego, the real role-playing fun begins. The cockpit opens to insert mini-figure Snap Wexley, one of the two figurines included in the purchase. The other doll is Lieutenant Connix. 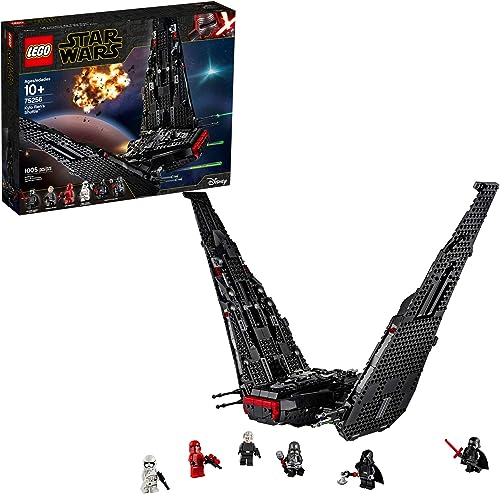 The Rise of the Skywalker Star Wars story won’t be the same without the Kylo Ren’s Shuttle 75256. It is one of the best Star Wars Lego sets based on the Rise of Skywalker movie. Compared to previous Lego sets, 75256 has lots of improvements that boys and girls aged ten-years and older may enjoy.

The 1005 pieces Star Wars Lego set also comes with six mini-figures. The figurine representing Supreme Leader Kylo Ren wears an impressive cloak made from stiff fabric, a striking helmet with red streaks, and his cross-guard lightsaber.  Removing the helmet exposes his angry face with the scar. He is accompanied by two ominous Knights of Ren, General Pryde, a Sith Trooper, and a First Order Stormtrooper.

With wings that fold and extend and a cockpit that can seat three mini figurines and two firing shooters, the Shuttle is ready for action. A boarding ramp, two spring-loaded shooters, two cylindrical thrusters, and a bulbar are some of the details that complete the Upsilon-class Shuttle. 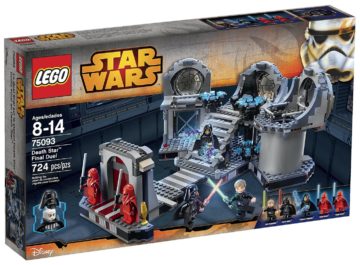 The Lego Star Wars Death Star final duel building kit is your child’s opportunity to recreate the moment when Luke Skywalker and his father, Darth Vader, fight their final momentous battle. The final model features amazing detail, including the reactor shaft and Return of the Jedi throne room.

The throne room has all the necessary pieces for recreating the famous duel between Luke Skywalker and Darth Vader, including the throne and three windows using the TIE fighter mold.

Luke Skywalker’s fate is in your hands! 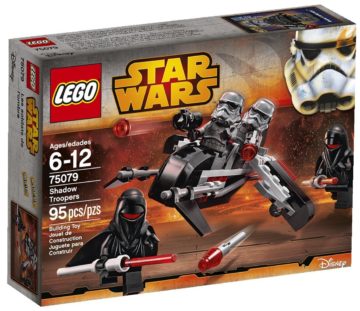 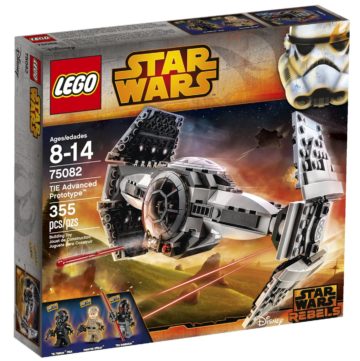 A TIE Advanced Prototype toy kit from Lego is ideal for exciting battles. This kit was inspired by the animated Star Wars: Rebels action series, so if your child is a fan, he will love the kit. Developed from the TIE Fighter design, the TIE Advanced Prototype has advanced technology and weapons to hunt down rogue rebels.

The top hatch opens to seat the TIE fighter pilot and is a great improvement to the previous TIE Fighter cockpit. The Inquisitor’s secret starship features folding wings fold in for landing mode. Three figurines with their weapons, including the Grand Inquisitor’s lightsaber with a new hilt, are ready for battle.

When fully built, it looks fantastic and an excellent addition to the collection of Star Wars Lego Sets. The set with its 355 pieces is perfect for kids 8-14 years. 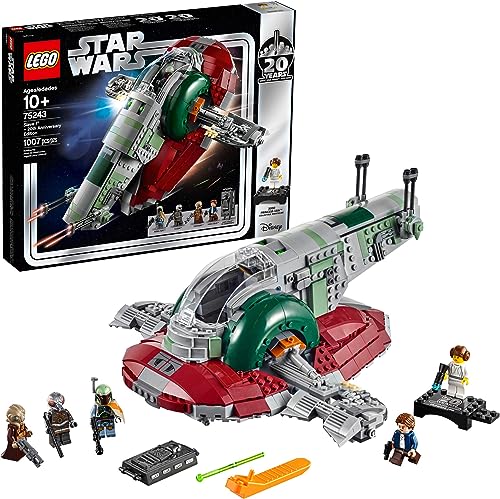 Lego Sets, Star Wars building sets, specifically, celebrated the 20th Anniversary with an exquisite detailed Slave I model. Darth Vader sends out six bounty hunters to find the Millennium Falcon. Boba Fett is the most famous of the bounty hunters appearing in Star Wars Episode V: The Empire Strikes Back.

The Minifigure of Boba Fett features dressed in green armor with the green jetpack. Impressively Boba Fett’s battle damage is displayed with metallic silver highlights. The other figurines in the kit are 4-LOM, Zuckuss, Han Solo, and Princess Leia.

The self-leveling cockpit seat, side wings, carry handle, and storage for Han Solo, are some of the details that make this kit one of the best Star Wars Lego Sets as a 20th Anniversary collectable. The set consists of 1007 pieces. 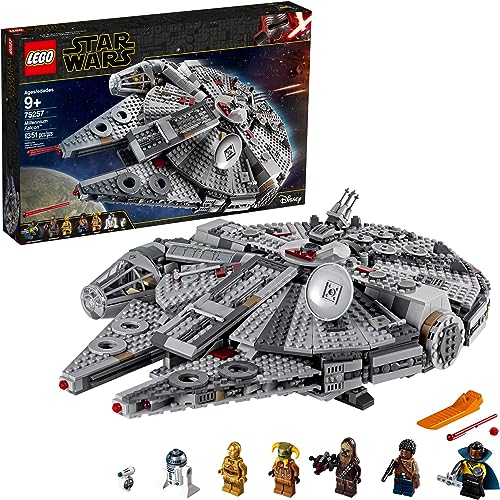 The Millennium Falcon 75257 Starship is an update of the iconic classic, and one of the best Star Wars sets to build. The 4×6 wedge plates that were introduced in 2019 give the starship an overall better look and the larger panels cover the roof openings previous models had.  Seven LEGO Star Wars characters accompany the Millennium Falcon. With Finn, Chewbacca, Lando Calrissian, Boolio, C-3PO, BB-8, and D-O, the starship is ready for space adventures.

Not surprisingly, the 1351 pieces starship is one of the most popular 3D LEGO toys for older kids aged nine years and above. The super cool Lego set features many exciting internal and external features, including an opening cockpit, detailed interior, a hidden compartment, two spring-loaded shooters, rotating top and bottom gun turrets, and a lowering ramp.

Teenagers who are looking for a challenge may like the Ultimate Millennium Falcon set with 7541 pieces! 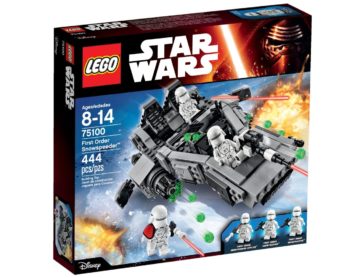 The set features a three-man crew, weapons and transparent wheels, so it appears as if the Snowspeeder is hovering along the ground. The two First Order Snowtroopers and a First Order Snowtrooper Officer minifigures come with weapons ready for rapid response support in recreating scenes from Star Wars: The Force Awakens.

It is a great Lego Star Wars set for kids. The set contains 444 pieces and best for children ages 8-14 years to reconstruct the vehicle. 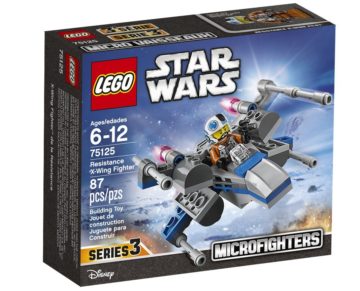 The Lego Star Wars X-Wing Resistance Fighter is a smaller kit than most, which makes it a better choice for younger kids. The X-Wing fighter is a Star Wars resistance craft. The kit includes a mini-pilot to fly the vehicle. He has his own helmet and a blaster pistol, so he can take part in any major battles your child recreates. The kit is one of the Microfighters collectable Lego Star Wars sets. 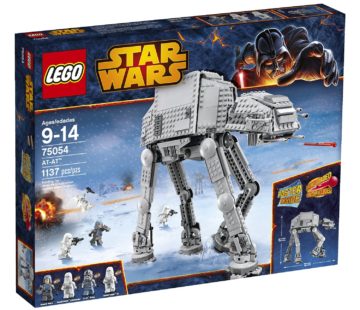 If your child already has a Lego Snowspeeder, you definitely need the Lego Star Wars AT-AT toy to complete your collection. The Lego AT-AT combat craft comes with a driver, General Veers, a Snow Trooper Commander, and two additional Snow Troopers. The head moves and the body opens up to reveal a trap door. Use the weapons provided to reenact the Battle of Hot. Let the fun commence! 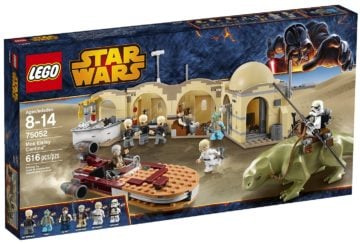 The Lego Star Wars Mos Eisley Cantina is where the showdown between Han Solo and Greedo took place in Star Wars: Episode IV A New Hope. The set includes lots of mini-figures, including Han Solo, Luke Skywalker, Obi-Wan Kenobi, Sand Troopers, and of course, Greedo. There is also a very cool Dewback figure.

The cantina itself is incredibly detailed. There are even beverage dispensers and a seating area. The three Bith Musicians fit in the care for the Cantina band, with one seated behind the Omni Box. By placing Han Solo and Greedo in one of the two alcoves, you are creating the scene for a fight.

Children ages 8-14 may enjoy building the set with 616 pieces and having fun recreating the fight between Greedo and Han Solo. 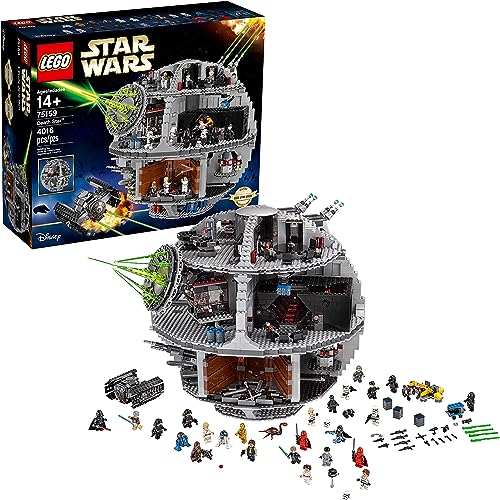 For the ultimate challenge, there is nothing more exciting than a Lego Star Wars Death Star 75159 Space Station Kit. As you might expect, this kit is suitable for older children and teenagers. Once constructed it

There are dozens more Lego Star Wars Sets to choose from, so let us know which ones are your favorite.

Laura is a freelance writer and a blogger. Regularly called a 'tech geek' by family and friends, she is the go-to girl for anything new happening in the industry.