Looking for a way to get the children out of the house and playing outside this summer?  While tag and kick-the-can are great games, one parental secret passed down over the years is almost foolproof – buy them some Nerf bows and arrows or blasters!

Ever since Nerf foam guns were introduced in the 1990s, children have been enjoying the camaraderie of playing games with one another while using the toys.  Soon after, Nerf introduced their first bow and arrow toy as well.  Ever since that time, thousands of children have used the bows and blasters to learn teamwork, fair play, and how to connect “In Real Life.”

If you want to see our picks for the best Nerf Bows and Blasters, read on! 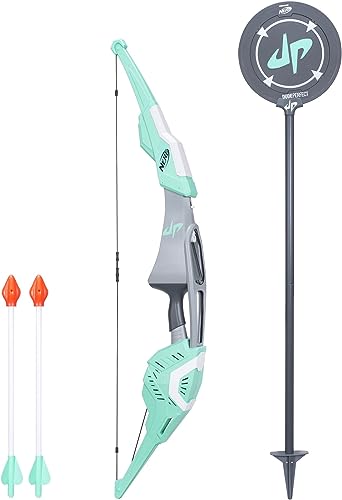 This NERF bow is a great intermediate step between 100% “toy” boys and the real thing.  Made for kids to play inside and outside; this product still delivers outstanding distance and control.  With a little practice, you can hit the included target at distances up to 100 feet.  At 42 inches long, it is meant for “average” sized 8 year-olds and up.  The bow seems to require about 10″ of pull to get the string back.

While the included arrows are much safer than real arrows, this isn’t a toy you’d generally use to shoot at a friend.  The arrows have a little heft to them, and would probably hurt a bit if you were on the receiving end of a shot.  If you follow our safety rules in the guide, you should be fine.  After playing with the bow for a while if the 2 Nerf arrows eventually prove to be too few, there are refill packs available at a reasonable price. 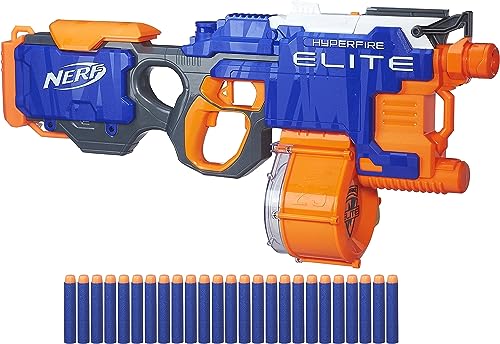 Called by some the fastest-firing machine gun Nerf has ever made, you’ll enjoy dominating the play battlefield with the Nerf N-Strike Hyperfire Blaster.  Foam darts are fired out of the drum by a 4-D battery-powered motor.  Nerf claims you can get 90 feet of firing distance, but I guess that it is under ideal conditions.  Still, for most backyard fights that don’t take place at long ranges, the 25-dart capacity will leave you with plenty of ammo to spare.

Nerf Rebelle Agent Bow Blaster is the best nerf bow for girls from eight years old and up. The Nerf bow and arrow set includes three purple Nerf arrows.  Hit your mark from the beginning with the site trigger. When you pull the string back and launch, the blaster fires arrows up to 85 feet.

The arrows whistle when they fly. By the time the targets hear the whistling sound the arrows make, it is too late. The Heartbreaker Bow blaster, with its true bow action, is different than other bows and arrows. Arrows contain secret messages that are only deciphered by the person who as the decoder. Girlfriends can send messages to each other without worrying if it is intercepted by nosy siblings or boys from the neighborhood. Without the decoder, the message is safe.

The bow comes with a detachable quiver which attaches to the clothes or the bow keeping arrows handy for quick action. 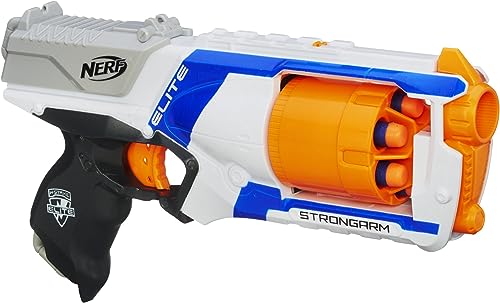 The Nerf N-Strike Strongarm Blaster is a great starter option to get into Nerf blasting.  While not the top-of-the-line model, it does have a six-dart capacity and the ability to rapid-fire if you need it.  It’s manually-controlled, so there is no need to worry if your batteries are charged or not.

This toy is often found on Amazon for a very reasonable price.  If you are looking to dip your toes into the blaster water, this is a fine choice. 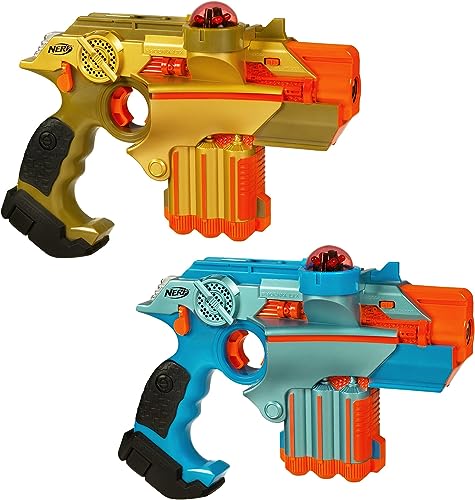 No bullets to lose…nothing left in your backyard to hunt around for in the failing light before bed. Instead, just pure fun with the Nerf Lazer Tag Phoneix LTX Tagger 2-Pack!

This set of two blasters allows kids to begin competing in their lazer-tag matches immediately.  Sets are compatible with one another, so as more children in the neighborhood buy LTX guns, more will be able to join in the fun.  Outdoor range is excellent.  Two hundred feet of a range is normal with some 300 feet shots having been reported.  Indoor you’d expect even better range – but I don’t have 300 feet of the line of sight in my house.

The guns themselves store the rules of the game.  One great feature is the ability to decide how many hits it takes before a player is knocked out of the game.  This is handy when older kids want to play with younger ones – or adults with children.  Let the younger player have more lives to allow for a more even match.

What To Look For In A Nerf Gun

As a first-time buyer of a Nerf Gun here are some features to consider. The first question you would like answered is the age-old debate of should boys play with toy guns? It is a personal decision each parent needs to make. This guide will give you enough information to make an informative decision.

In this guide, you will find tips on choosing the right kind of Nerf Gun for your child…or for you…

Have you ever had a cup of tea poured from an empty teapot? Or watched two sticks fight each other, or watched stones become cars, or were offered mud as your favorite cookies? Children will take an object, add action and motion and the object transforms into whatever they were imagining.

Follow these 8 rules as safety guidelines for Nerf Guns.

Boys make guns out of anything, a stick, a gumshoe, their fingers…from anything and everything. Are toy guns good or bad for your kid? One father commented that if every boy with a toy gun is a potential killer, then nobody is safe on earth. Where do you draw the line? If playing with toy guns is dangerous because it leads to an affinity for guns? What about playing with cars and the number of car accidents? Riding a bike escalating into a motorbike…

Boys between ages 3-6 start ‘pretend playing’ with weapons and fighting. Boys outgrow their toy gun phase. The parent’s strong reaction may create an interest where there wasn’t any. Often, it’s best to let the children play and let them be the hero in their story.

Toy guns have been available for a long time. School shootings have made parents aware of the danger of guns in the hands of children. That led to the question if boys should be allowed to play with toy guns? Won’t it lead to a school shooting or another violent act? There aren’t any substantial studies linking toy guns and pretend weapons with aggression. Cruelty to animals has a stronger correlation to violent behavior than toy guns.

A Closer Look at the Benefits of Toy Guns

By joining your kid at play, you can teach the child gun safety rules with the toy gun.

Children need exercise. Watching TV or playing games on the tablet won’t give them the exercise a child needs. When boys are enacting scenarios while playing with toy guns, they are getting physical exercise.

Target practice teaches the child balance because they have to aim, shoot, and keep their body still while doing it.

The Toy Gun as a Tool for Child Development

Pretend to play battles and wars that boys love to do, help the child develop assertiveness, to control impulse, and stay within boundary limits. These characteristics will help the child as an adult to understand boundaries and not to react impulsively but to think the problem through.

The games played with toy guns places some pressure on the child to be the hero, and to win the bad guy. This slight pressure teaches a child how to cope with stress in adulthood.

Hiding behind the tree waiting for your ‘victim’ requires planning the best strategy, having the patience to wait, and staying focused until the ‘enemy’ shows up. You want to shoot first and not be caught unawares.

Target practice and role-play scenarios teach the child to compete in a healthy way.

What Nerf Toy Is Right For You

The best way to choose a Nerf Gun or bows and arrows are to consider the age of the player, the environment (indoors or outdoors), and the play style of the individual.

The colorful Nerf Guns aren’t necessarily gendered specific. However, there are pink arrows and pink and purple Nerf Guns that are potent in any girl’s hands. Foam arrows and darts may have less of a physical impact when hitting the target.

I trust this article has answered some of your questions and concerns regarding toy guns. What is your favorite Nerf Gun…for your kids, of course…?

Have kids who love to play?

Get our favorite learning toys straight to your inbox!