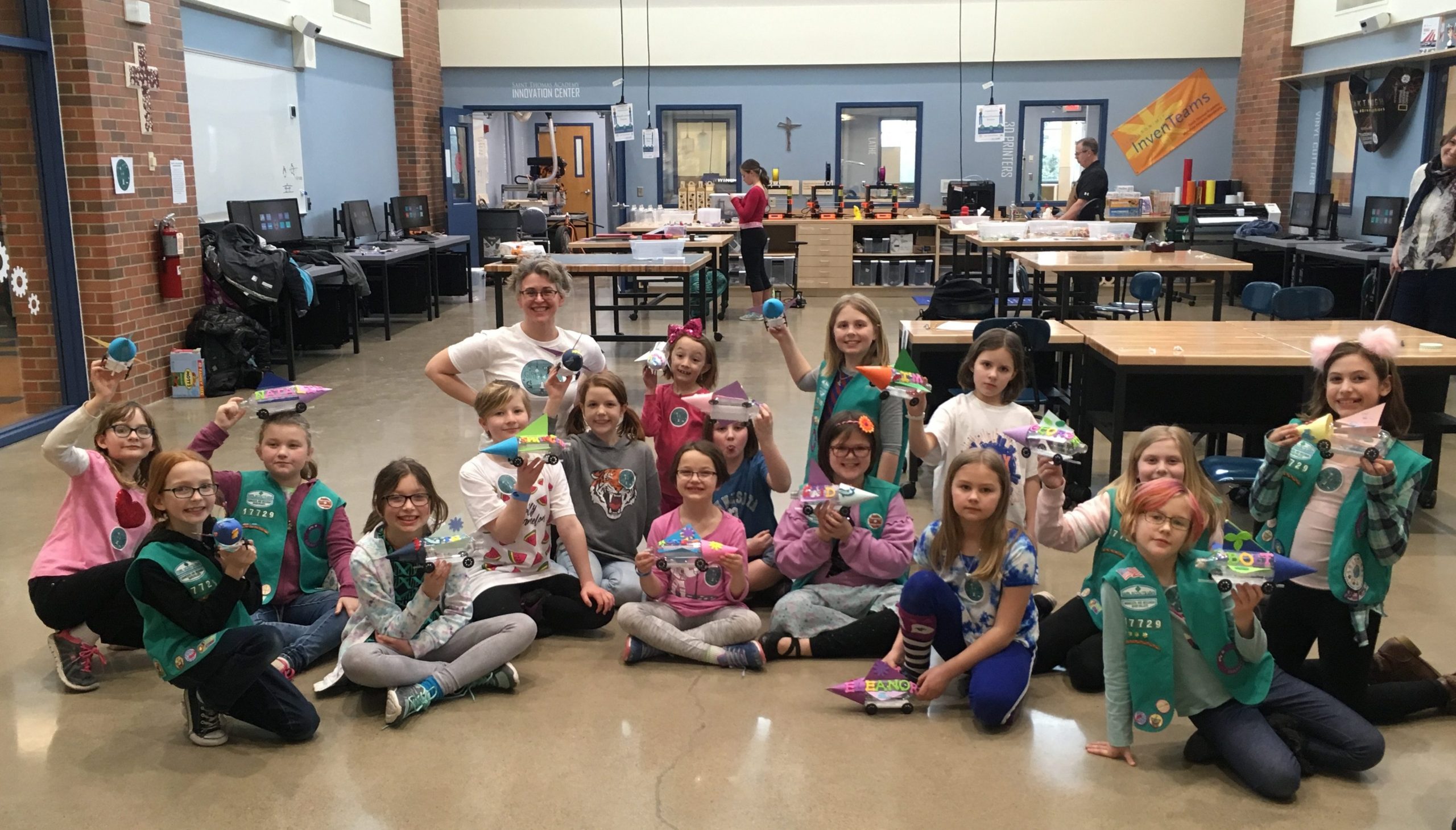 When I was little I dreamed of becoming a writer.  At the age of nine I declared that I would be famous for writing a series of short stories entitled, “The Eraser that Ate my Pen” which followed the crazy antics of my pink eraser and his insatiable appetite for red pens.  I was inspired to follow in the footsteps of my mother who created magic when she put pen to paper, writing everything from song lyrics, to poetry, to keeping a record of her life in spiral-bound journals.  Would I have wanted to become a literary master had I not seen my mother write?  Maybe.

Without knowing she was doing it, every time she sat down to write, my mother became my role model.  Seeing someone who looked like me excel at something that I had a small amount of talent in, encouraged me to keep trying.

Upon turning nine my eldest daughter, now ten, informed us of her desire to become an engineer.  I guess the years my daughters have spent at my side while my students and I worked on experimental vehicles and projects for NASA taught them more than I realized.  While they hunted for resin fingers, covered car molds with chalk drawings, and helped drill holes in a variety of creations, they were doing more than simply playing, they were learning about how the world around them worked. Like my own mother, I too had become an un-knowing role model. Would my daughter still want to become an engineer had she not seen what I do with my students?  Maybe.

Finding people to look up to may be one of the most important things we can do to help actualize our potential. Because no matter where we are on our journey, we all need role models.  They help guide us to become the best versions of ourselves, inspire us to keep going when it gets difficult, and teach us to never lose sight of our dreams and aspirations.  We celebrate their successes and lament their failures. When they win we feel like we win and because they were able to make it, we believe that we are able to make it too.

Wanting to feed my daughters’ love for STEM I took them to meet Astronaut Abby, the founder The Mars Generation, for a special Train like a Martian kick-off event last May at the Science Museum of Minnesota.  This young woman has inspired countless girls around the world to follow their dreams as she follows hers to become one of the first astronauts to travel to Mars.  It is obvious after spending even a brief amount of time with her, that Astronaut Abby is as passionate about all things space as she is about inspiring those around her to achieve their dreams. After meeting Astronaut Abby and seeing my daughters’ faces light up, I realized I wanted to expand what I was doing for them and ignite that same level of excitement in other young women to help bridge the wide gap that exists between girls and STEM. So at the end of the summer I registered to become a DiscoverE Girl Day Role model and applied for one of their Bell Girl Day Grants.

The autumn leaves were beginning to fall when I found out of my proposal’s acceptance. I don’t know who was more excited, my daughters or me. They jumped up and down with joy when I told them that in the spring, they, along with twenty fourth-grade Girl Scouts would see “Dream Big: Engineering Our World” at the Science Museum of Minnesota and then test their hand at engineering by building air-powered cars in the Innovation Center at my school.

As the temperature continued to drop and a new year began, the Science Museum of Minnesota declared 2018 as the “Year of the Engineer” and invited educators from across the state to get a special preview of “Dream Big” and meet Menzer Pehlivan, one of the engineers featured in the film.  I couldn’t believe my luck.  After all, I had been impatiently awaiting the chance to see the film after having watched the inspirational preview multiple times since its 2017 release. I contemplated traveling to other cities where the film was being shown and even went so far as to email the producers and beg them to bring the film to Minnesota.

On one cold Saturday morning in January, I drove past the glittering Ice Palace in downtown St. Paul on my way to the museum, hoping that I hadn’t hyped up the film too much in my head. I hadn’t.  In fact, I was still spinning from the magic of it as I made my way down the musical stairs from the Omnitheater to a seat in the lower auditorium for Menzer’s presentation on attracting the next generation to STEM.  From start to finish she repeatedly mentioned how important it is for young girls to see representations of themselves in every vocation. From engineer to astronaut, from test pilot to marine biologist, if a girl can see someone who looks like her, who makes what they do relatable to her, she is more willing to take a chance and explore that career.  Because we are such visual creatures, the importance of girls seeing women like Menzer talk about why engineering is relevant in today’s world cannot be understated.

March arrived and with it our “Introduce a Girl to Engineering Day.” As I handed out stickers and movie tickets to the girls in the Science Museum’s atrium the excitement was palpable. I admit that I was rather nervous about what they would think of the film.  Would they like it as much as I had? Then the credits rolled, and we made our way out of the theater.  My worries turned out to be unfounded as multiple girls came up to me with huge smiles on their faces and said how much they liked the film.  While they were building and racing their air powered cars more than one girl stated how she wanted to become an engineer.

After the last air powered car whooshed by, and the exuberant screams from the Girl Scouts fell silent, I was surprised how this experience had inspired me as much as it had my young charges. This summer I will begin course work to earn my STEM Graduate Certificate in Engineering Education through the University of Saint Thomas.  It’s been over a decade since I was a student in school, and there is a large ball of nerves in my stomach, but I am excited to see what I will learn and what new things will emerge in my classroom.  My role models will be right there next to me, encouraging me to keep going when I don’t believe in myself, and showing me that it can be done.

While my dreams of being a famous author for stories about the antics of a school supply staple have not come to fruition, perhaps I can change my dream and become a role model to inspire other pioneers.  After all, we are at an exciting time in history where people all over the world are working together to ensure that everyone has a seat at the table.

As National Geographic states in its Expand the Field video, “It only takes one woman to inspire a generation. Who will you inspire?”