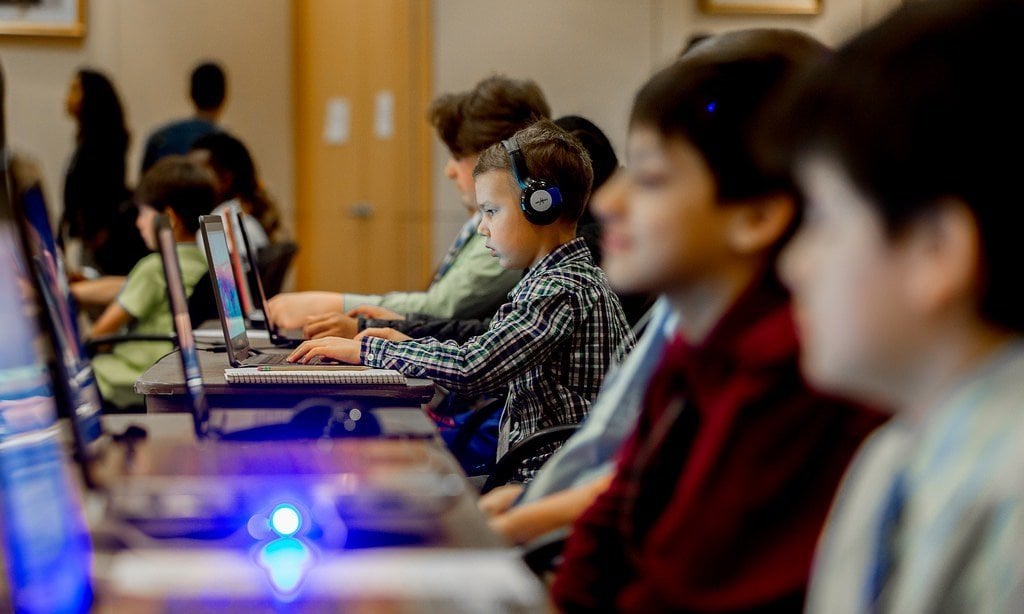 Whether Darwin said it or he was paraphrased, this clichéd quote still has merit:

It is not the strongest of the species that survives, nor the most intelligent, but the one most adaptable to change.

What the author of this quote left out was that “change is defeated by anxiety almost every time.” Then, when anxiety is eventually overthrown, change is going to be a messy business, fraught with uncertainty.

The change initiative I was involved in was introducing compulsory one-to-one devices into the year 9 cohort, of which I was the dean. This meant that I was tasked with developing the on-line pastoral NETiquette for this year group. As well as being an English teacher and a member of the professional development team, I was also integral in developing pedagogical outcomes and disseminating information through weekly professional development sessions.

Anxiety ran high. We hadn’t heard of Twitter as an effective Professional Learning Network (PLN). Our neighbouring schools were peering over the fence watching to see if we’d go up in smoke. The press coverage was scorching hot and I mean that in the most negative sense. On our team was the principal, the associate principal, the technology infrastructure leader—and me. In those early stages the principal had to be viewed as the agent of change.

Her Leadership Style Was Transformational

The definition of this leadership style can be described as “inspirational leaders who guide their followers through an uncertain environment and followers are challenged.”

Times were very uncertain. The only models we had to follow seemed to be American schools and they simply did not fit with ours. No one that we could see had taken a large New Zealand state school, added school-wide internet coverage and put devices onto their “compulsory stationery list.” So to ask what leadership style I had adopted would’ve seemed ludicrous at the time. We seemed to be starting from scratch with absolutely everything and leading was not on my mind.

On reflection, I guess my approach would have been a combination of pedagogical leadership where I was “concerned with the links between desired educational outcomes and the set of realities that surround the educational setting.”

The educational setting was in itself unknown. We simply did not know if this cohort of 300 plus students would even turn up with devices. So on a teaching level we were reinventing all that we did, for students who could potentially turn up with paper and pen. On a deaning level, I was writing responsible use policies and ICT documents that might well never get used.

The press backed off as there was no sensational story to tell. Why? Our students turned up at school with devices, just as we had planned. So the other leadership style I seemed to emerge with would have to be transformational leadership. I went “beyond simple self-interests.” I definitely took risks. “Venture into the unknown” became my motto. As I developed, so too did my cohort of students. We were embarking on a journey of “innovation and creativity.” Together we “questioned assumptions” and through this invigorating and new approach to teaching and learning, we underwent “personal development.”

The intended outcomes of the one-to-one device initiative was in keeping with the Ministry’s vision: “Digital technologies are constantly changing the way we live, work and play. All New Zealanders need new skills to participate fully in this digital world. Our education system needs to engender creativity in all students.” But let’s face it, as educators we are always looking for the “silver bullet,” the pedagogical approach that will have the biggest impact on teaching and learning.

Was this the “silver bullet“?

Maybe not, but our initial intended outcome was learning for:

Anyone. Anywhere. Anytime. Learning that is continuous, relevant and adaptive.

Our biggest change or gain? Engagement of students.

We had to forge our way without much direction and guidance from others. I soon realised that, while our principal would spend much money and time on Professional Development, that PD came largely from within the school. Granted, we did have the flipped approach as a model for creating time in class to spend on higher level thinking. We also initially had Ruben Puentedura’s SAMR model of adopting technology. But the expectation was that PD would emerge from ‘experts’ within the school.

Teachers did start emerging as leaders in their areas. The so-called experts were your own colleagues.

This embodies the key principles of transformational leadership. So teachers did start emerging as leaders in their areas. The strength with this approach is that rather than going to a course and then never implementing change in the classroom, PD was ongoing, regular and in-house. The so-called experts were your own colleagues. In this way we introduced the flipped approach, video tutorials, project based learning and blogging to the staff.

The weakness is that, as so often in initiatives that bring about change, you have your forerunners. Those that fearlessly dive in and come up with crazy concoctions that invariably ignite enthusiasm in their classes. Then you have those that wait to see how the leaders get on before they implement changes. Then there’s the group that will implement change if someone else gets them up and running. Finally you have the doubters who believe that technology in the classroom is anathema to their entire being.

All drive comes from a small group of people. We have learnt that no matter how transformational your team is “neither managerial imperatives nor inspirational speeches will be sufficient to move [some] people from their entrenched positions.”

So while we as the change agents embodied both pedagogical and transformational leadership by being tech role models “with a vision for the future,” and while we afforded time for teacher learning and development, it was not going to be enthusiastically adopted by all. In interviewing students, I have found that they get frustrated by the inconsistent adoption of change.

One-to-One Devices and Their Challenges

At the time of our adoption of one-to-one devices, Google Apps were limited, particularly with our preferred device, namely the iPad, chosen because of its portability and battery life—and most importantly, its built in camera. Now I say our preferred device, that does not mean that every student was forced to buy a particular brand, although the majority did. So two things unfolded. One is that we went with a learning management system which is now all but outdated. Secondly, if we needed to put resources onto the LMS, it could not be brand related.

Personally I create multi touch books for each year level that I teach. Because these are only available on Apple products, it is incumbent on me to provide all the material from the iBook and make them available on Android devices and PCs too. This means doubling up work. In addition, the leadership team, in not prescribing one brand of device, meant that teachers were faced with potentially a myriad of device types, with different operating systems and capabilities.

Adapting to a Transformative Leading Style

While I’d like to chalk this up as a negative in their leadership style and say we should’ve been more dictatorial in our leadership, I don’t really believe that. I have grown in my understanding of technology and where at first I’d have a stomach churning moment looking at the ‘foreign’ screen, I now have the attitude that I’ll work it out, regardless of the operating system. This is partly because we were told to look for and rely on experts within our classes—which we do—but also because we were not given any tech assistance from the on-site ICT technician. So the transformative leadership style could be seen by some as directionless and aloof, as we were strongly encouraged to carve our own path. We were not micro managed. I see this as a strength because the associate principal in particular saw leadership and creativity in me, coupled with a passion for teaching. Instead of telling me what to do and how to do it, he empowered me to develop tech skills, to emerge as a role model and leader who would then go on to empower other staff members and students.

Another positive in this transformational leadership style is that the students were encouraged to let their voice be heard. As I said initially, my first role was to develop the online-pastoral approach we would take. Our first task was to develop a one-to-one device policy. We collaborated with representatives from the student body. Together we came up with a draft policy. Five years later it is still in draft form because with the way that technology is changing constantly, so too will the policy document.

We elected not to get students to sign a contract, because at the end of the day, all you’ve got is a big pile of useless signed papers. We rejected the transactional leadership style with its punishment and rewards, looking for faults. Rather we integrated our digital citizenship programme into our lessons. I created resources in which I simplified and put into “teen speak” the policies and protocols adopted by our team. “Acceptable use policies and contracts do not teach students what is appropriate and why.” Teachers do, parents do, siblings and peers do. So, on reflection, our choice to integrate teachable moments I think was a valid leadership initiative.

So fast forwarding even further to 2016, have we got the ‘silver bullet’ for education where our grades have skyrocketed? No. But what do we have? We have got engaged students who are creative and problem solvers. Not always because that was the intention. But because their day is one faced by teachers who are digital natives, digital immigrants, digital nomads and digital dinosaurs. Students have had to develop flexible and growth mindsets to cope with the variety of approaches and have had to problem solve through a wide range of alternative approaches. But I do believe that the transformational style which has allowed teachers to collaborate, think critically and challenge the status quo, but not supervise, organise or direct, has ultimately benefited many students.

I believe that our screenagers have evolved into digital jugglers who can adapt to a wide range of approaches. Through this, the intended learning outcomes have been surpassed as they develop 21st century key competencies, like effective collaboration, knowledge construction and creativity. The process is increasingly more important than the content. Problem solving is becoming a sought after skill. Through largely pedagogical and transformational leadership our students are growing. We are limited only by our imagination and our drive.

Feature image courtesy of Flickr, US Department of Education.

Linda Rubens has been teaching English for 26 years and joined Orewa College eight years ago. She soon realised that she had to ramp up her technology skills in order to keep up with developments in teaching and learning styles. In 2012 Linda was appointed dean of year 9 and helped lead the pastoral side of the BYOD programme. She is currently the year 13 dean. Linda focuses on a differentiated and blended programme in her flipped lessons. She was included in the Apple Distingished Educators Class of 2015.