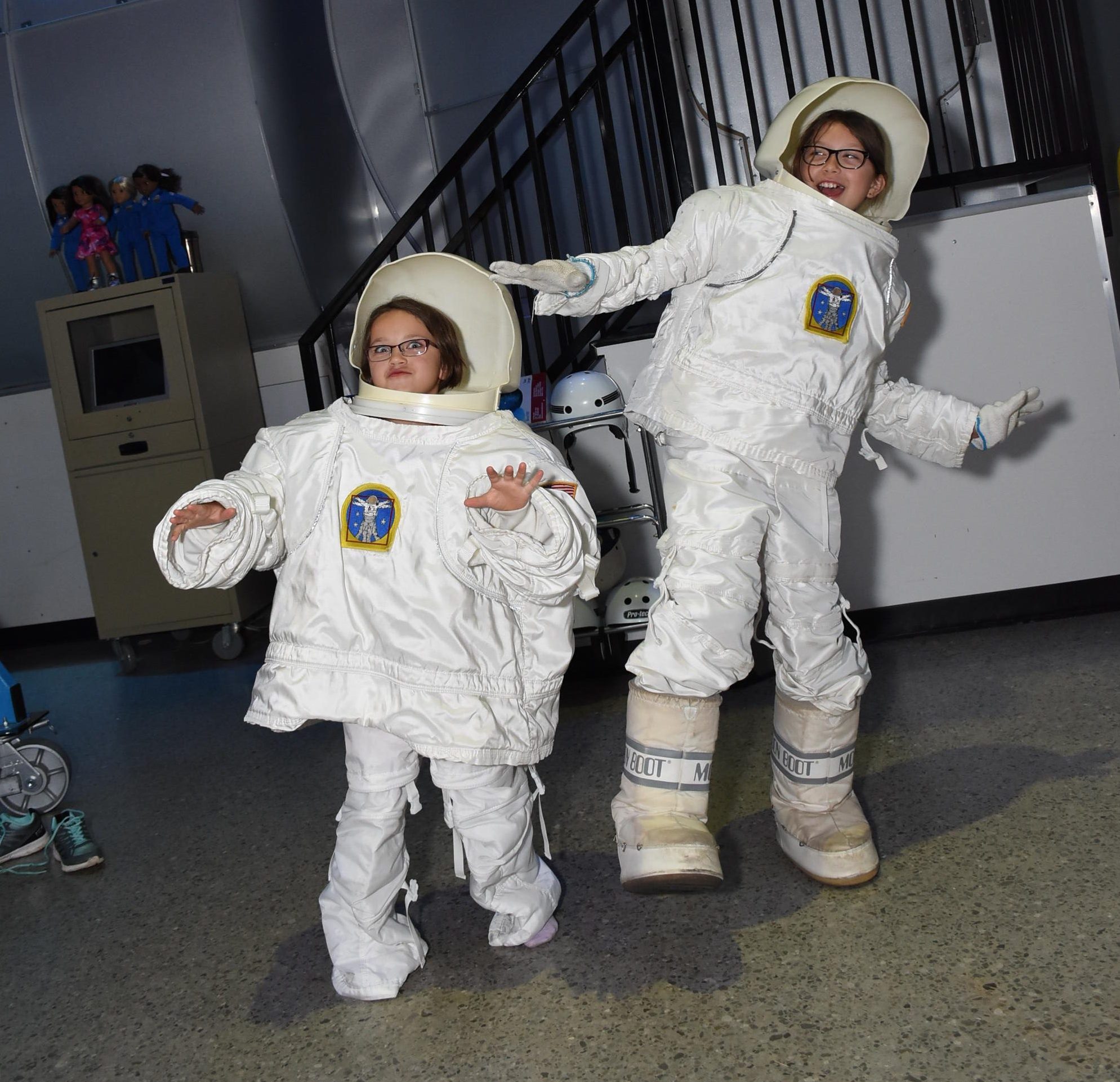 When I was little I dreamed of traveling to space and touching the stars.  My father would wake us up in the middle of the night to hike through the woods or walk along the dirt road to see the meteor showers put on a late night show for us.  We would come back home and enjoy cups of hot cocoa and either regale each other with how many shooting stars we had seen or slurp our marshmallows in a state of quiet lamenting, wishing we had seen something remarkable on our late night sortie.

In 1986 I saw Halley’s comet cross the sky one late night with my father.  It was the same year I watched The Challenger explode on live television while sitting cross-legged on my carpet square on the floor of my elementary school.  It was a year that held all of the wonder and awe of space juxtaposed with the fragility of human life.

I hadn’t really thought much about the stars, galaxies or planets that swirl around us until recently.  After participating in NASA’s Microgravity University for Educators last year, my love for space was rekindled and I enthusiastically brought it into both my home and my school life.  My French students eagerly studied the planets and even planned a trip to Mars this past spring, remaining en français as they investigated the heavens.  At home I curled up on the couch drawing the planets and watching space themed shows while my daughters completed their chef d’oeuvres of the solar system in crayon and paint, asking multiple questions on what had happened to the atmosphere on Mars as they smeared colors to get Jupiter’s red spot just right.

But it was when I was walking through the hallways of my daughters’ elementary school and heard their science teacher refer to me as “NASA mom” that I knew I had to find an experience akin to riding the Partial Gravity Simulator (POGO) at Johnson Space Center to do with my girls.  It seemed serendipitous that a few days later a catalog from American Girl came to our door and while my daughters were eyeing every desired product a flyer fell out detailing how we could, “Experience Space Camp just like the 2018 Girl of the Year, Luciana Vega.”

Intrigued, I researched more online, looking primarily at the family camp option.  I called Space Camp with a long list of questions and asked if it was true that all participants, even moms, got a flight suit while at camp.  The customer service representative responded with an energetic yes, which pretty much sealed the deal for me and I began to plan how to make this dream a reality. 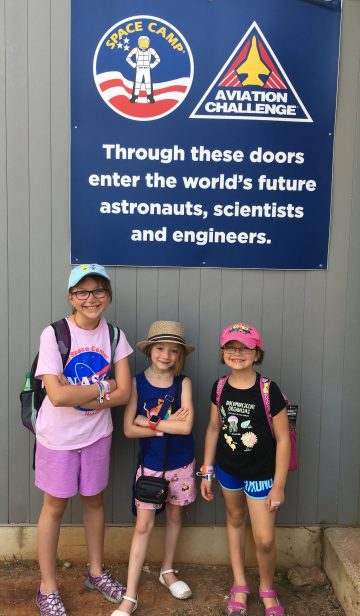 On an average Thursday in June my two daughters and I, along with one of my best friends and her daughter, met at the airport to begin our extraordinary journey to touch the stars.  The following morning we stood outside the gates to Space Camp marveling at the rockets and the large astronaut logo as we waited to check in.  After getting all of our required wristbands attached we headed to where we would be staying, Habitat 4, to drop our belongings and get our much anticipated flight suits.  On our way into our Habitat we stopped to pose in front of the first of many signs with a quote that reads, “Through these doors enter the world’s future astronauts, scientists and engineers.” After snapping a few pictures and receiving our new flight suits, we headed off to the amphitheater to hear former astronaut Robert L. Gibson speak, meet our crew trainer and officially start our intergalactic adventure.

From the time our feet walked on the moon in the 1/6th gravity chair till our heads hit the pillows at night in our habitat, our three days were, in the words of my eldest, “packed full of fun.”  We planned and flew missions on Space Shuttles, constructed and launched rockets, built robots, trained like astronauts used to on the Multi-Axis Trainer and learned about the history of the space program.  The best part was sharing these experiences with my daughters and seeing them shine in the face of challenges. 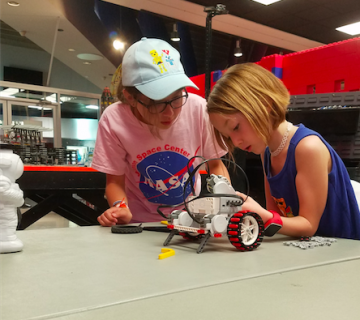 During our first mission my youngest was EECOM and every time the commander on the shuttle said, “Houston, we have a problem,” she would open her special book and walk them through how to solve it, not letting the new, and sometimes arduous words, stop her.  My eldest worked past her frustration of failing and worked together with her friend to figure out how to make our robot go forward and hit a button without falling over during our robotics challenge.

In our second mission my daughters went on a spacewalk to repair the tiles outside the International Space Station.  They dangled from the ceiling, clutching special adhesive foam, aka shaving cream, to complete the repairs.  Giggles erupted out of them each time our Space Camp Crew Trainers picked up anything the girls had set down, sending the object flying past their heads with the simple explanation of “Oh, no!  Microgravity!”  It reminded me of when I completed my tasks on the POGO and I couldn’t help but smile. 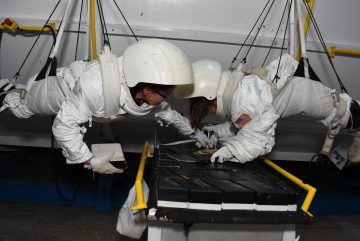 When our weekend of space exploration was over and all flight suits packed, we headed for the airport and the familiarity of home to once again put our feet firmly on the ground.  I flipped through the photos on my phone from our time at Family Space Camp and wondered what my daughters would remember from our weekend amongst the stars.

Just a few days later we were back at school to pack up my classroom.  My daughters decided to take a break from playing in the numerous cardboard boxes that littered my room to write letters to their favorite astronaut, Peggy Whitson.  After reading them, my heart melted and I knew that while they might not remember every little detail from our weekend, they will remember what was important. 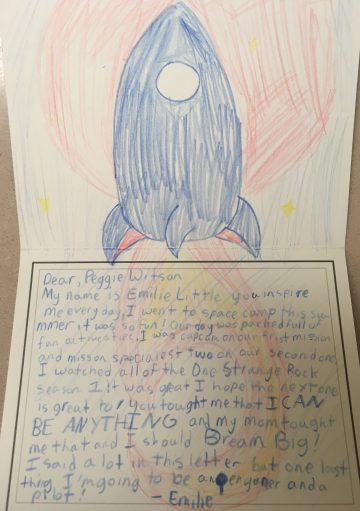 Recently, I took my daughters outside to look up at the night sky filled with planets and stars, and maybe just maybe, see a shooting star cross our part of the sky.  After a bit it became clear that there would be no night time show for us so we got ready to head in.  My youngest looked up at Mars, shinning bright red against the dark sky, and called out, “Goodnight Mars!  See you soon!”  Who knows?  Maybe she will.