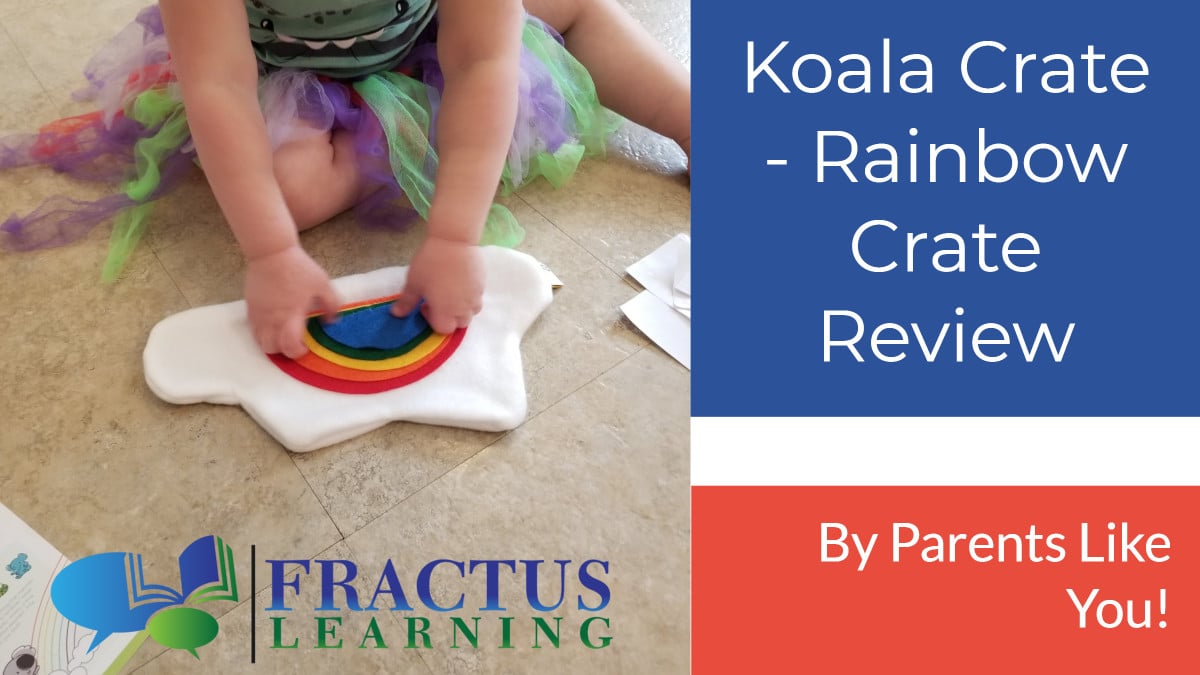 Here’s another Koala Crate review by one of our Friends of Fractus families that has an eager 3 1/2 year old girl with a love for rainbows! We were sent this craft box at no cost to us to review.

It’s no secret that in the past our parent reviewers have really liked the projects they’ve put together with their children. Will our family like the Rainbows Koala Crate box? Read on to find out.

What Does KiwiCo Offer?

We have had parents just like you put all of these KiwiCo subscription boxes to the test. Take a look at our KiwiCo reviews.

The following articles is the opinion of the reviewer – edited a bit for brevity. :)

My family was thrilled to have the opportunity to review another Koala Crate! My three-year old really enjoys anything hands-on. This crate is geared toward kids right in her wheelhouse – toddlers, or 3-4-year-olds. Preschoolers will really like this kit!

It is heartwarming when my daughter is having so much fun that she doesn’t even know there is learning involved!

Upon opening the box, first impression was how well the box was packed and the materials and supplies were organized.  I guess that’s one of the Kiwi Co subscription boxes “calling cards” – they seem to be known for putting a lot of care into preparing the projects and making sure the box is filled and full of all the supplies needed are available.

I pulled out the instructions and let my 3 and a half-year-old daughter take a look. We also deleved into the magazine that came packed inside the subscription box.

The Cloud Stickers Were Fun – Making The Rainbow + Cloud Pillow

The first thing she grabbed was the rainbow cloud pillow. I mean – she could barely resist a fluffy white cloud pillow -or a rainbow one – on her own. There’s no way she wouldn’t be engaged with a combo of the two!

She likes anything that resembles a sticker.  And this is where we called an audible. The cloud stickers are supposed to go on the tote bag project below. But who am I to stand in the way of a child ready to create according to her super-creative imagination?

So the cloud pillow had some cloud stickers as well as rainbow stickers. I don’t think it hurt the fun quotient at all.

The felt pieces are well constructed.  She really tried to line everything up at the bottom with each subsequent sticker.  You could see her working hard – and I could tell her fine motor skills were being put into play.

There was a lot of her asking me “like this?”   I let her do all the steps on her own – except a few of the felt stickers she just could not get the backing off so I started it for her then she really wanted to finish it and  put it on the cloud.

This part of the Koala Crate project was a great opportunity to work on her colors.  She was very interested in getting the rainbow colors in the right order – and she did an awesome job.

Once the rainbow stickers were on I opened the bag of stuffing and let her have at putting the stuff in the pillow.   She really looked to be having a good time filling the rainbow pillow.

When she finished the pillow with the rainbow, she put it on the ground in our playroom and laid down on it. It was a very cute memory for me.

The stained glass art was the next item we tackled from the Koala Crate Rainbows First, we removed the backing to the clear sticky sheet. This contact paper is what holds the “stained glass” together.

The next step is to create a scene out of black shapes – much like the metal in a real stained glass art piece would have. It’s the black frame outline of the project. The rainbow squares cover the back of this frame. She was not able to make a “scene” so to speak, as she is a little young to compose anything there.

There are little rainbow squares of tissue paper that are placed on a clear sticky sheet. This gives the effect of stained glass art. I think it’s fun for kids to create art much like an adult.

She really liked putting all the rainbow squares on the large sticky backing.   She was able to tackle this part of the KiwiCo Koala Crate project mostly on her own. The only thing I helped out with a little was the lining up of the squares.   She was very proud of what she did and had to run and show mom right away.

The last project of this Koala Crate Rainbows was the rainbow tote bag.  I had my wife do this one with her – she thought it looked like a cute project.   I have been hogging all the time with these and so I wanted to make sure she was able to get some time in too.

She is a big fan of playing with water.  The water dropper was a little too difficult for her to use to get the water onto the tissue paper so my wife had to help her. Other than being a little frustrated that she needed her parents help, she really enjoyed making the bag.

I’ve seen some people use a baking tray to keep the water mess to a minimum, but we didn’t need one.

This KiwiCo Koala Crate is a subscription box filled with all the items you need to have a fun day of craft projects with your son our daughter. My daughter loves rainbows, so I really liked the theme of this Koala Crate.

I like how the box gives kids the resources to explore use their own creative ideas – while still having instructions to follow.

My only criticism is there should have been separate amounts of tissue paper for the rainbow tote bag and the stained glass art project.   We are dealing with young kids, and it’s a bit of a stretch to expect a preschooler to divy up the tissue paper correctly. We ended up having to make do by the end of the tote bag.

I think that children a little older wouldn’t have an issue putting the black shapes onto the black frame of the “stained glass” project. Kids 4 and up would be able to complete that task pretty easily.

This was another great crate and completely age appropriate and fun for my 3.5 year old.     It was so much fun and extremely easy for her to get going with quickly.

Currently, your first month can start as low as $18.50 – but this changes depending on the specials Kiwi Co is running. The cost of the subscription is worth it in my opinion – why don’t you check it out today?