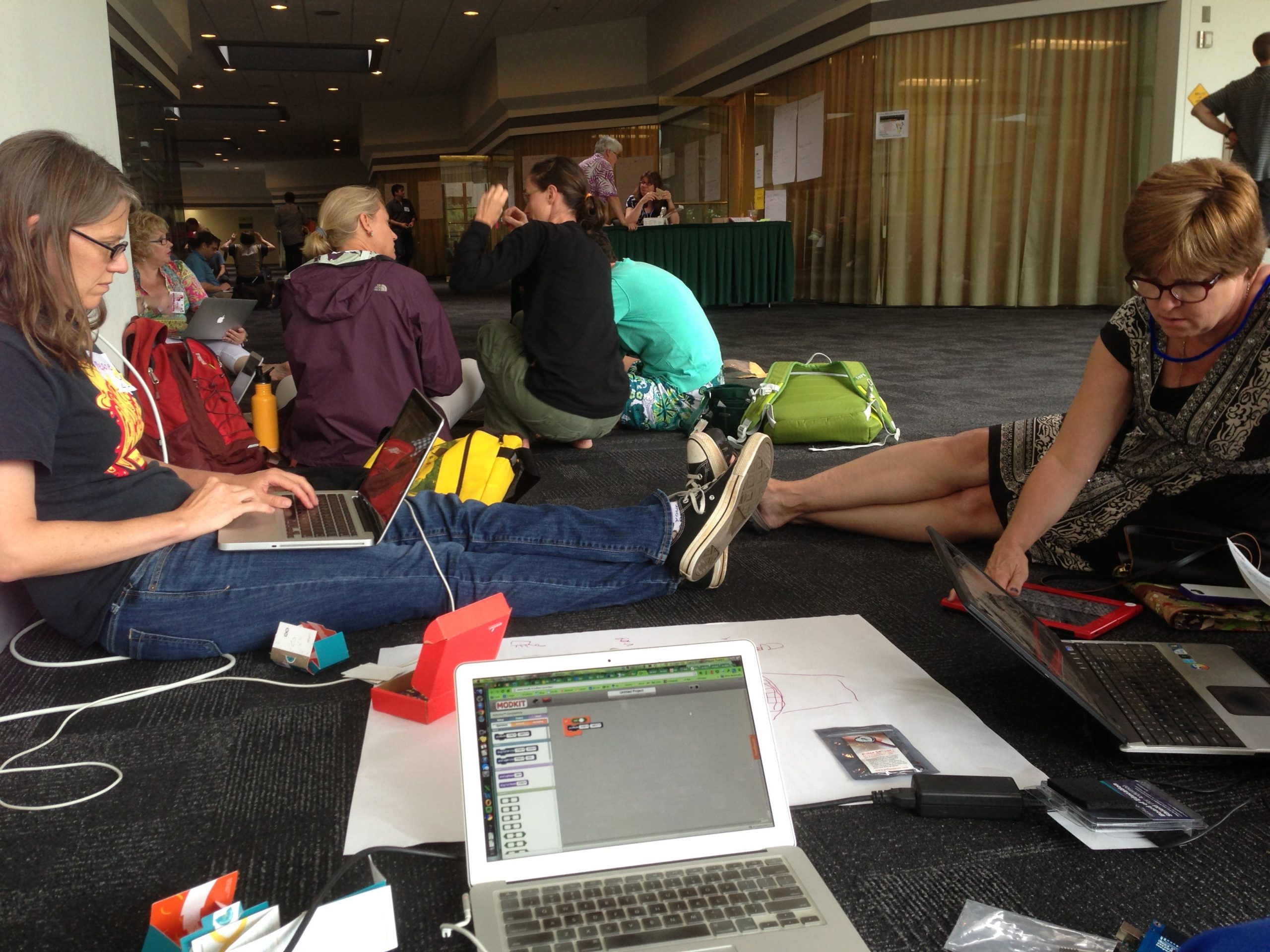 When was the last time you attended a conference or professional development opportunity and spent the entire time learning? Maybe your answer to that question is “never” but after attending Constructing Modern Knowledge (CMK) this past week, I can thankfully say, “a few days ago!”

CMK is truly a meaningful professional development experience and one where experience (through making) is the key word. Making is at the core of the entire week and instead of running from session to session or listening to long panels, the majority of our time was spent creating, exploring, failing, trying again, and sharing.

You can see the full schedule here and we did actually gather as a whole group at points to listen to amazing speakers like Eleanor Duckworth, Deborah Meier, and Tod Machover but you’ll notice that “project development” is where you spend most of your hours.

In addition to being meaningful, fun, and “modern,” CMK is also frustrating, confusing, challenging, and quite non-traditional. Please don’t think I mean any of those negatively though because one of my biggest takeaways from my time at CMK is how extremely valuable those difficult emotions are for us to experience as educators.

The Institute was attended by teachers, tech coordinators, librarians, administrators, and a range of others interested in making as learning. Working primarily in small groups, we divided up around project ideas that were thrown out on the first day (e.g., create a book controlled game, a “like” detector, an interactive scarf) and started working. There was no formal instruction or how-to sessions. Instead, we were encouraged to make, to try, and to use the resources we were provided, including three rooms full of books, materials (think MaKey MaKey kits, Lego Robotics, a 3D printer & much more) and experts, plus, of course other attendees!

After my own project idea (creating tangible coding sprites scannable by Google Glass, see DevTech) didn’t gain enough traction, I visited with a few other groups and settled in as a member of the “Smart Plant” Team. We were interested in creating an interactive plant for the classroom. Ultimately, this involved opening up an Arduino Starter Kit and getting to know its possible inputs and outputs, the code (sketches) needed to make it run, and the electronics behind creating a working circuit. Most of this was new to all of us and required a good deal of Internet research (compiled here), discussions with people who had used Arduino before, and a lot of “let’s try this and see what happens.”

I think that “let’s try” mentality is really the motivation behind attending CMK. Everyone there was interested in experiencing and giving value to making and doing, even if that making didn’t result in a working product or even anything resembling what you first hoped to create. There was deep discovery and understanding that came out of digging into a new topic without too much direction or guidance and we were excited for that freedom.

As CMK came to a close, I left feeling like:

it’s time, or past time really, to start offering more meaningful professional development experiences to all educators and to do that, we need more making.

It was by making, as a team and individually, a “Smart Plant” or any other project that came out of CMK, that each of us was able to share our experiences and passions. We engaged in hard fun that pushed us to inquire, discover, and reconsider what we knew, understood, and assumed. Making was where we realized that we had to have a resistor in our circuit to avoid blowing out our LED and making was where we failed and ran into error after error when trying to verify and run our Arduino code.

It was only through this doing and creating that the time and assessment pressures we put on our students became so much clearer and more frightful. Tasked with creating a project to present by day 4, we felt constrained by time and a lack of knowledge but we were lucky because we knew, there would no grade at the end of this Institute and we chose to do our project and we were driven and excited to engage with it.

Animated Anatomy T-Shirt made with #MaKeyMaKey and Scratch #CMK13 (watch that hamburger head down the intestine!) https://t.co/0Ur0rRWM0R

So then, what happens when we push projects on students, ones that have short deadlines and that students don’t care about yet affect whether they’re considered a good or even passing student? What happens when teachers don’t know what that feels like?

This is where CMK and hopefully similar opportunities, can begin to create real change. I’m confident that all of us who attended (some for a 2nd, 3rd, or even 4th time!) plan to return to our schools with hopes and goals of integrating more making into the classroom, after school, and throughout the curriculum. Having seen and experienced the power of making, we’re determined to share it with others and spread the learning. There’s even been talk of attendees creating small professional development opportunities around making at their schools. Little by little, meaningful professional development might start to make some headway.

Sad you missed CMK this year? Check out Invent to Learn: Making, Tinkering, and Engineering in the Classroom or follow the #MakerEd hashtag on Twitter to start building your own knowledge of making in education and networking with other makers.

Margaret A Powers is a Technology Coordinator working with students and teachers in Pre-K through 2nd Grade and a Technology and Education Consultant specializing in social media, early childhood, and global education. She is a Reggio-inspired educator who loves working with young children and is always learning.