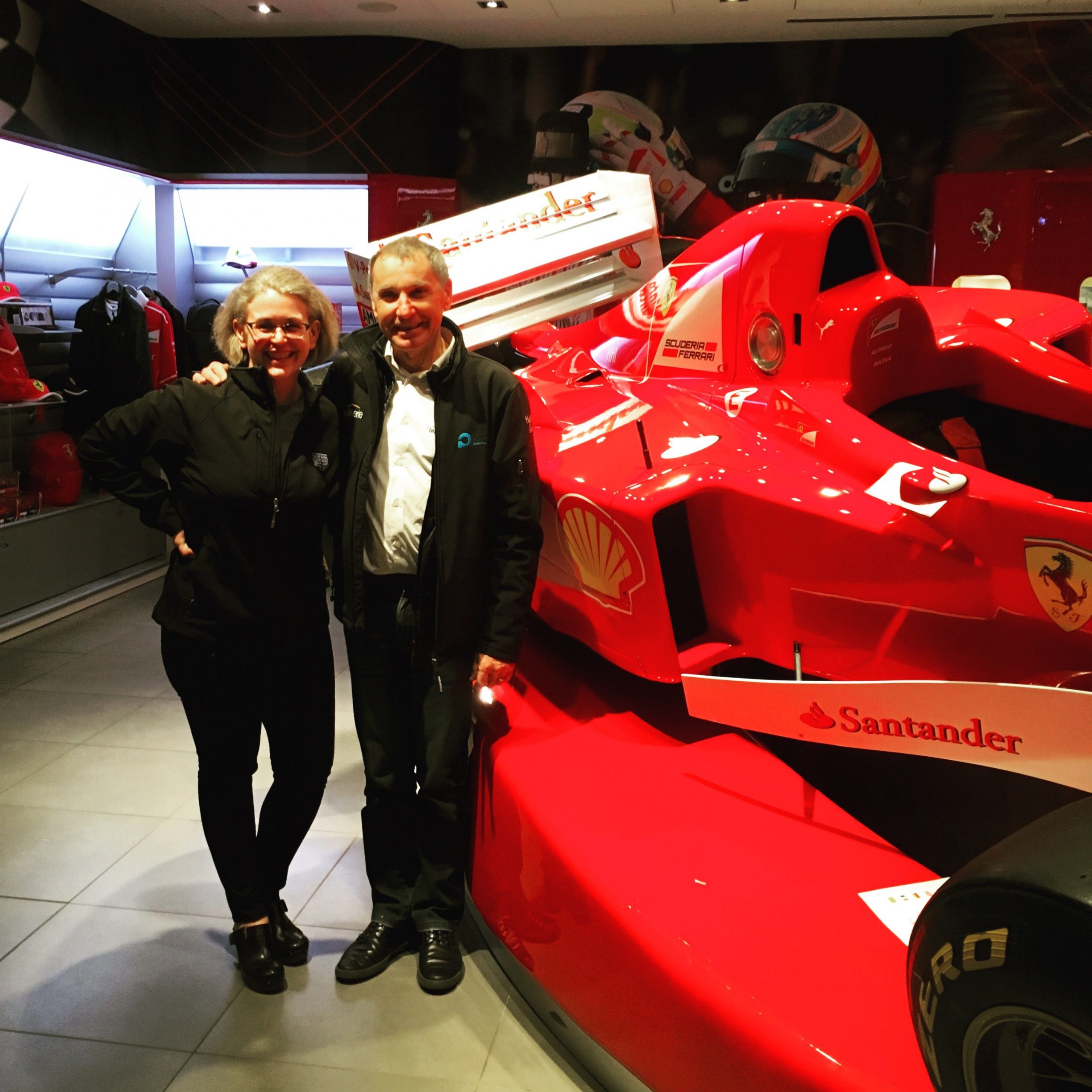 What does it take to be a pioneer? To leave the tried and true path in search of something more.  To know that it is not if failure will strike, but when, and how you will face adversity when it happens.

When I was in the fourth grade my school got a small computer lab filled with several Macintosh computers, floppy disks, and the game, The Oregon Trail.  During the course of a month we transformed from simple Minnesotan elementary school children to pioneers in covered wagons on the quest for land and opportunity.  Along the way we would eat hardtack, hunt, cross rivers, and hope to be spared from the deadly disease of dysentery.  That time spent virtually exploring in the safe surrounding of my rural elementary school remains a highlight of my childhood education experience. 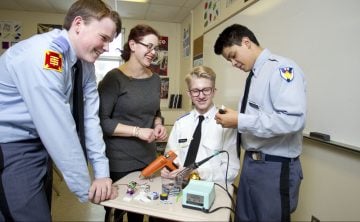 When I first started to sneak STEM into my French classes I never thought myself a pioneer.  After all, I wasn’t traveling by horse, nor worrying about making it to a certain location on time before winter came.  I looked at it as a means to get more of my students interested in the language that I love, while at the same time harnessing that same wonderment I felt while forging a virtual trail to the West.

What I didn’t realize at the time was how many see STEM and World Language as an either or debate. Polarizing many World Language teachers to eschew any and all reference of the importance of STEM education in today’s classroom instead of seeking to marry the two subjects together.  Oddly enough, the vast majority of my STEM educator friends lament that they wished they could converse in another language and many more implore their students to continue studying both a STEM field, as well as a world language, long past whatever graduation requirement their schools have in place.

This leaves me to feel as if I belong to two very different worlds. In the first, when I bring up the capstone engineering projects my French students do at language conferences it is often times met with a quizzical glance and a comment of, “That really isn’t STEM you are doing, it’s just fancy arts and crafts.” In the second, heads of Maker Spaces and Innovation Centers want to learn more about my French capstone projects in order to start a dialogue with their faculty on how to integrate STEM into other subjects. 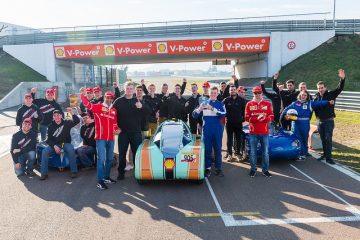 Each and every day I straddle these two worlds; working to build a bridge from one to the other so that others may more easily follow in my footsteps. But one thing my time spent forging a virtual path to the West never taught me, was how lonely it can be to be a pioneer.

From my own journey I have learned a few things.  First and foremost is how hard it is to be accepted by those in your chosen field as you veer off the tried and true path.  Some will continue to cheer and offer their support, but the vast majority seem to watch with a raised eyebrow waiting for any sign of a slip-up as they continue down the known trail.  The second is that no matter the obstacles, when you keep pushing through, when you get out of your comfort zone, great things happen. I have learned that it is ok for me to stop a lesson and say, “Wow, this really isn’t working.  In fact, it’s pretty messy, let’s stop and regroup in a few.” It is often times after such moments that breakthroughs occur.

One of those breakthrough moments made the Experimental Vehicle Team that I moderate rethink the construction of our car after it broke down in the middle of the Shell Eco-marathon Drivers’ World Championship in London in 2016.  We completely redesigned, reengineered and extensively tested our 2017 car before we hit the race track, and it paid off.  We came in first in the Americas in April and became the World Champions in London in May. 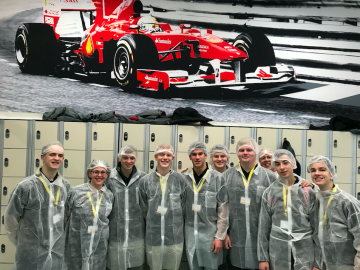 We won a once in a lifetime trip in December to the Ferrari Factory in Maranello, Italy to attend behind the scenes tours and technical workshops with some of the best engineers in Formula 1 racing.  One thing that struck me was how time and time again the Ferrari engineers mentioned that in order to do well and succeed in their company one needed to speak both engineering and Italian.  In every workshop they noted the importance of different cultures and how valuable it is to speak another language.

During the week we were joined for certain activities with the second and third place teams from the Drivers’ World Championship.  I was both excited and nervous to test my French engineering prowess with the second place team, Polytech Nantes; Microjoule.

As all three teams geared up to race for efficiency on our second day at the iconic Pista di Fiorano it became quickly apparent that our low tires would prohibit our ability to compete.  When I went to ask for a tire pump from Polytech Nantes, their moderator, Philippe Maindru, made sure we knew how to work it and to what level we should fill our tires.  Later on that day, after my students had interviewed Formula 1 legend, Kimi Räikkönen, and we had walked both away and towards the sunset numerous times to for the perfect photo, I sat down next to Philippe for dinner at Enzo Ferrari’s favorite place to eat; Ristorante Cavallino. 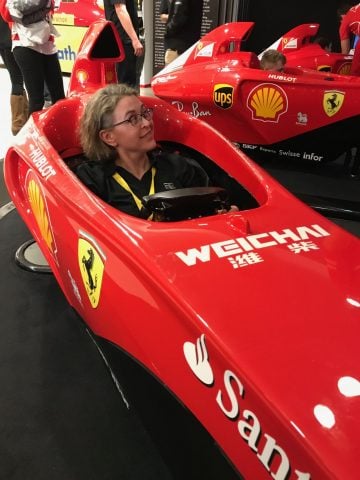 Since Philippe doesn’t speak English he told me that we were going to work on my French over ample plates of pasta and steak.  At first I was quite nervous, after all the technical vocabulary used to talk about vehicle construction was not what I used on a daily basis in my classroom.  Nevertheless, as the evening went on I became more comfortable as Philippe and I exchanged stories of engineering problems and our families. He even told me several suggestions to help get the best fuel efficiency out of our vehicle, and perhaps most importantly, what I should do to secure a good run on the Ferrari simulators that our team would drive the next day.

Unfortunately, even with Philippe’s advice, I failed to get even one valid run on the red race car simulators.  Turns out, I am not meant to be an F1 driver, even in the virtual world.  When I went down to the lobby on the second to last morning I found that Philippe had left something for me, a book that he had written about his team’s 30th anniversary.  Inside he wrote: “2 passions à travers l’océan à faire vivre avec la langue de Molière.  Avec mon admiration.” (“Two passions across the ocean came to life with the language of Molière. With my admiration.”)

The Ferrari F1 simulators were a far cry from the covered wagons of days gone by, but to me they represented the same thing.  A vehicle for a modern day pioneer who is constantly striving to bridge two seemingly unrelated worlds so that many more students can find their own counterparts on the other side of the world.