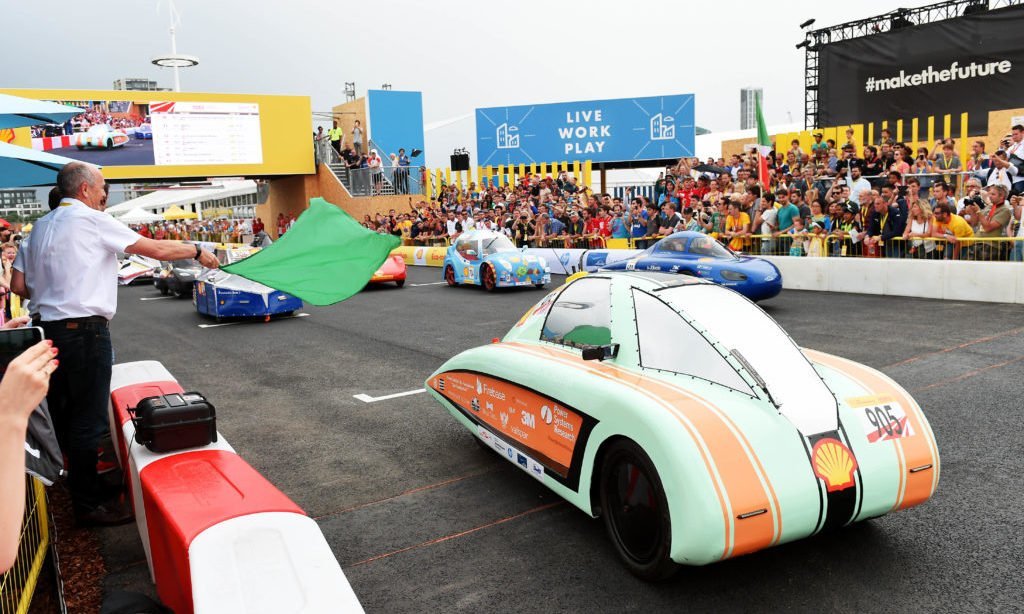 Every year for the past twenty the Saint Thomas Academy Experimental Vehicle Team (STA EVT) has built a new vehicle from the ground up to give our students the best engineering experience a high-schooler can get. The internationally recognized program started in 1997. My fellow moderator Mark Westlake and I believe in the importance of learning from mistakes. That the most important life lessons come from experience, that science is not always easy and that the answers are not always found in the back of the book.

EVT’s inaugural year was made up of a group of high-school seniors who began building their energy efficient supermileage car in the fall to race eight months later at the MTEEA SuperMileage Challenge in MN. While being highly successful; Saint Thomas Academy still holds the track record of 1322.36 MPG, Mark soon learned the folly of a seniors only extra-curricular team when he had to start from scratch the next fall with a brand new group of budding engineers.

[bctt tweet=”Science is not always easy and the answers are not always found in the back of the book.” username=”fractuslearning”]

Since then, EVT has evolved to run very much like an apprenticeship program among our students. The seniors teach the sophomores, who in turn watch and learn whilst doing a lot of the grunt work, while the juniors hone their skills and prepare to be next year’s leaders.

The first time I delved into the teamwork world of EVT was in the spring of 2009 when I chaperoned the team at the Solar Bike Rayce at Crowder College in Missouri. I thought I knew what to expect; in my mind it would be Mark who told the boys how much energy to use, when to speed up and when to slow down. But when I got there, I realized how wrong I was. While several students got the cars and bikes ready others set up shop next to the race track with whiteboards, dry erase markers and calculators. As their vehicles came round turn after turn they crunched the numbers deciding when the driver should let up on the gas and when to punch it.

[bctt tweet=”The most important element is not time, learning from mistakes or ingenuity; it is teamwork.” username=”fractuslearning”]

The image of the students all working together as one, knowing everyone’s strengths and weaknesses; when to give constructive criticism, when to be quiet and how to win using their combined skills, was one of the most amazing things I had ever witnessed. That is what stayed with me the entire weekend and what I could not stop talking about in the Teacher’s Lounge the next few weeks after we returned. It is the main reason why I began working with the team in earnest seven years ago.

So how did a group of teenagers build a world championship car in eight months, besting engineering universities from around the globe? The answer begins a little over a year ago when we were in London at Queen Elizabeth’s Olympic Park gearing up for the Shell Eco-Marathon Drivers’ World Championship. 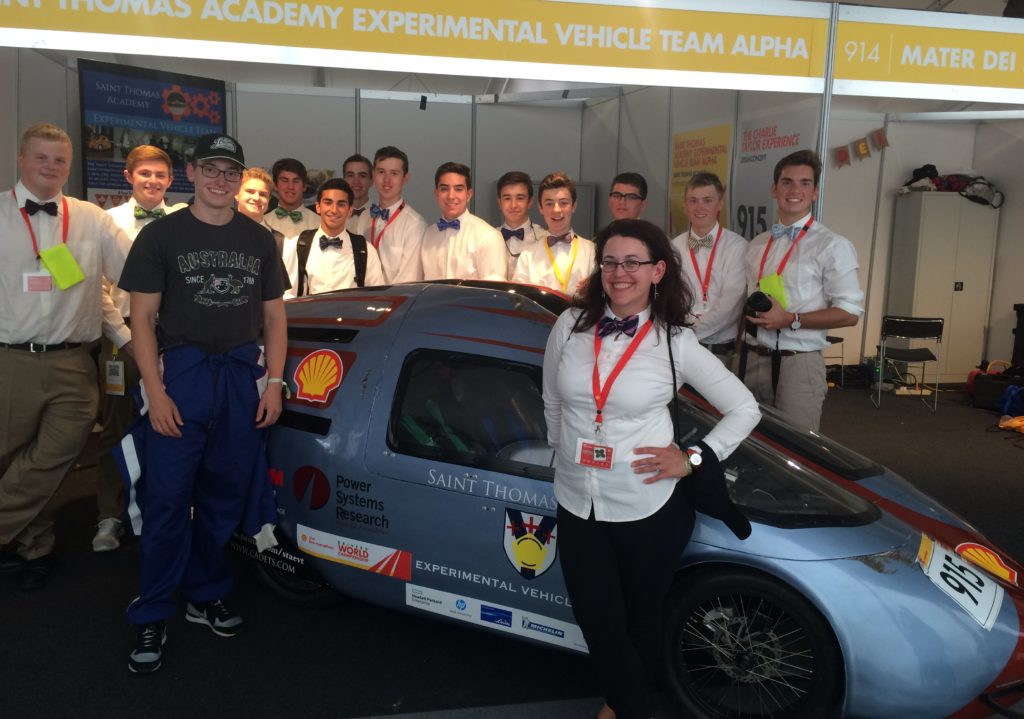 Here we were, in a car built for two, in a race designed for one, in the semi-finals before the championship one hour later with vehicles from universities and high-schools from all over the world. I couldn’t help but think how far we had come from the grass plains of Missouri as our car drove around the awe inspiring venue that held the 2012 Olympics. As I watched our number begin its way along the digital track on the big-screen I held my breath and slowly exhaled as we took the lead. But in an instant everything changed.

“We have word of a roll-over on the track ladies and gentlemen at the first narrow turn, we aren’t sure which car it is, wait, it’s car #915 from Saint Thomas Academy.” My heart sank, and panic mounted as I thought of my student in the car. Thankfully, the safety systems that Shell insisted upon and checked before we could begin racing, worked. Our student driver was unharmed, but our car, The Charlie Taylor Experience, was not and we were out of the competition.

I remember worrying about my students’ reaction to our loss. We had traveled across an ocean only to be finished minutes into the race. But as they gazed upon the damaged car they shrugged and said, “Well, we certainly learned what not to do.” 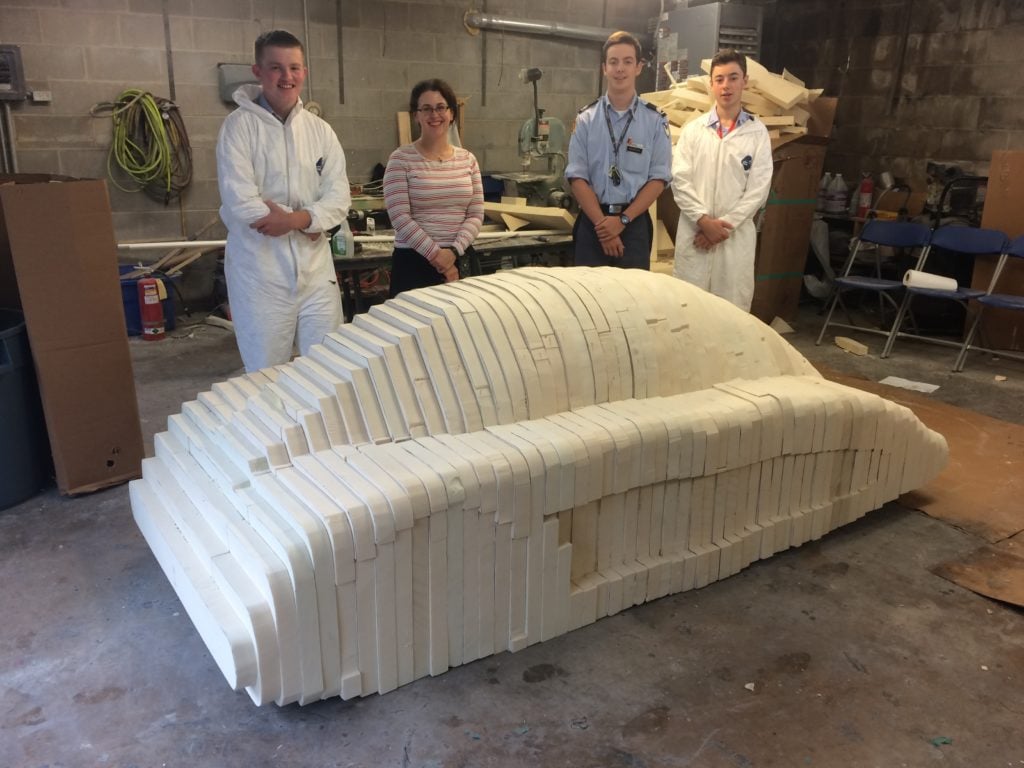 Cue August 2016 when we began building this year’s car. As we started work on the new design we looked at The Charlie Taylor Experience for inspiration. The new car would be much shorter, closer to the ground, designed for only one person, and most importantly be able to take any tight turns we might face.

The more I think about what my students manage to create every year, the more I realize that the most important element is not time, learning from mistakes or ingenuity; it is teamwork. Everything else helps to create an engineering tour de force, but if you don’t have teamwork, you might as well have one student creating a sonnet another a novel and a third working on an orchestral symphony. Instead of an enchanting masterpiece the end result would be a cacophonous mess.

While we hoped to be able to redeem ourselves at the 2017 Drivers’ World Championship in London, we first had to focus on doing well in the Shell Eco-marathon Americas competition in Detroit, MI at the end of April. London participation would be determined by how well our battery electric vehicle performed here.

At the end of March, it was clear that my students had once again managed to come together and create their version of an engineering magnum opus when they took Urban Concept 4 out for a test drive in the parking lot. A few weeks later we packed everything up and headed to Detroit.

When we entered Cobo Center, at the heart of Motor City, it was astonishing to see so many other amazing vehicles from all over the Americas. From Wednesday to Sunday over one hundred student teams from eight different countries raced about either to put finishing touches on their cars or to queue up in the seemingly endless lines for tech inspection, test track time or the official race.

Instead of setting up shop with whiteboards and calculators along the track, my students grabbed walkie-talkies and cell phones and ran to various locations along the barricaded streets of the race route. Just like eight years ago, it was the students who calculated energy usage on each of the ten laps around the track, as Mark and I sat on the frigid bleachers watching the race unfold.

When the car came round the last corner on its final lap it was easy to see that our students were excited. When we entered the fuel tent they said, “We think we did the most energy efficient run yet for our category.” Around noon on Sunday we found out that we had won our division and that we were one of the teams selected to partake in the Drivers’ World Championship (DWC) regional qualifying race later that day. If we were one of the top three fastest teams from the qualifier race, we would be on our way to London.

Gearing up for the DWC regional qualifier the skies over Detroit turned dark and it was clear that precipitation was imminent. Rain began to fall as the UrbanConcept cars completed the brake test. We queued up for the start of the race only to be pelted by water, forcing the cars back into the fueling tent while a troupe of workers swept the water off the streets.

Since we had the fastest qualifying lap time we started out at the pole position on the start grid. Three, two, one and we were off! My hands shook nervously as our car rounded the corner for the first of three laps, well in the lead of the others. I held my breath for the remaining two laps anxiously awaiting the wave of the final flag. 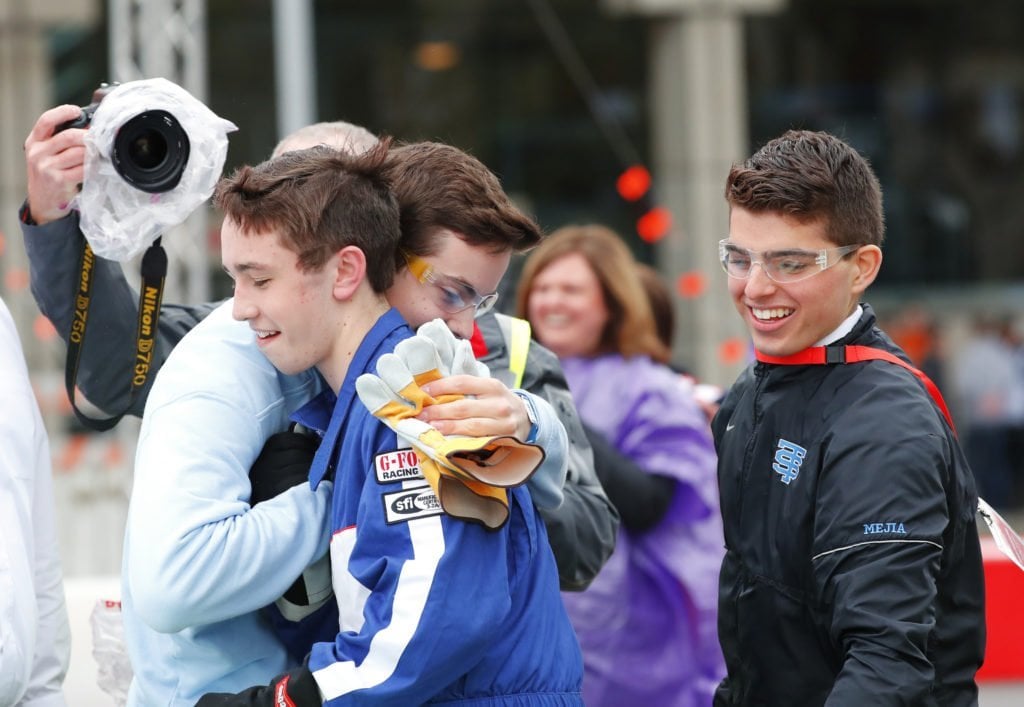 The race official waved the checkered flag signaling the end of the race as we crossed the finish line first. Overcome with waves of emotions I couldn’t stop smiling, crying, clapping and screaming. My students hugged at the finish line, congratulating each other on their hard-work and well deserved win.

Three weeks later we once again found ourselves making the trek through Queen Elizabeth’s Olympic Park in London, England to get ready for the final race of the DWC. It was with nervous anticipation that we passed the safety inspection tests and the preliminary race laps Thursday through Saturday.

Once again on a Sunday we found ourselves queuing up for the final race of the Drivers’ World Championship with cars representing the best that the Americas, Europe and Asia had to offer. I couldn’t help but feel the nervous tension all throughout my body as we completed the brake test and qualifying lap. 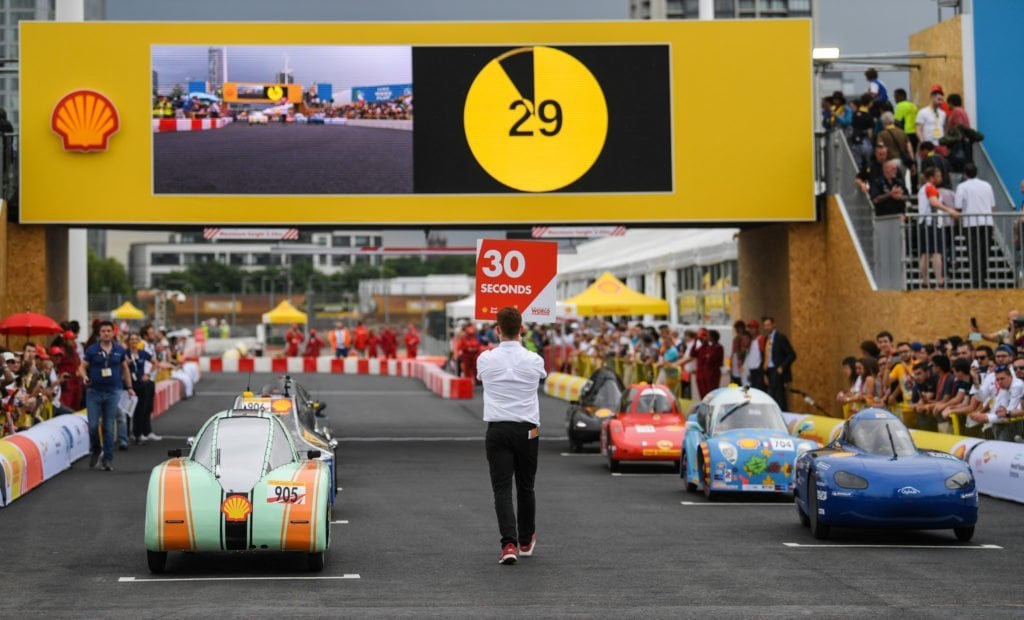 Success! We had once again secured the fastest time during the qualifying lap and began the race from the pole position. However, the skies over Britain had begun to turn a nasty shade of grey and I knew in my bones that rain was imminent.

Thirty seconds to go. A digital count-down ticked away the time for the thousands of spectators who had come to watch a race that married speed with fuel efficiency. 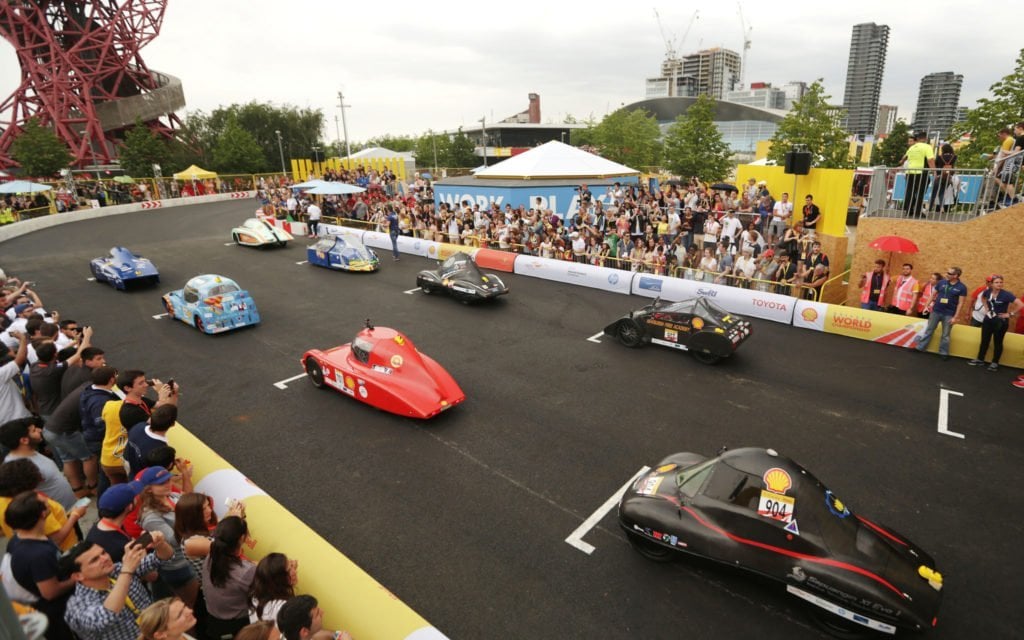 Ten. I stood in the pit with my students, pacing back and forth. Five. My hands shook. One. The green flag waved and we began the race with a commanding lead. I was once again blown away by the teamwork my students displayed as they radioed each other numbers doing the math in their heads and giving encouraging words.

Then rain. It was at first a light mist, then fat drops began coming down faster with each passing second. Deeming it unsafe to finish the race officials called it off. How would the winner be declared? Based off of the fastest qualifying lap time someone said. It took a minute for that to sink in for us. “Madame does that mean that we won?” “I think so, oh my gosh it does! We won!”

As they called our name to the podium to collect our trophy and claim a prize of a lifetime; a week-long trip to the Ferrari Headquarters in Italy, I felt extremely proud of my students. Their determination, drive and teamwork were the reason we were standing there. 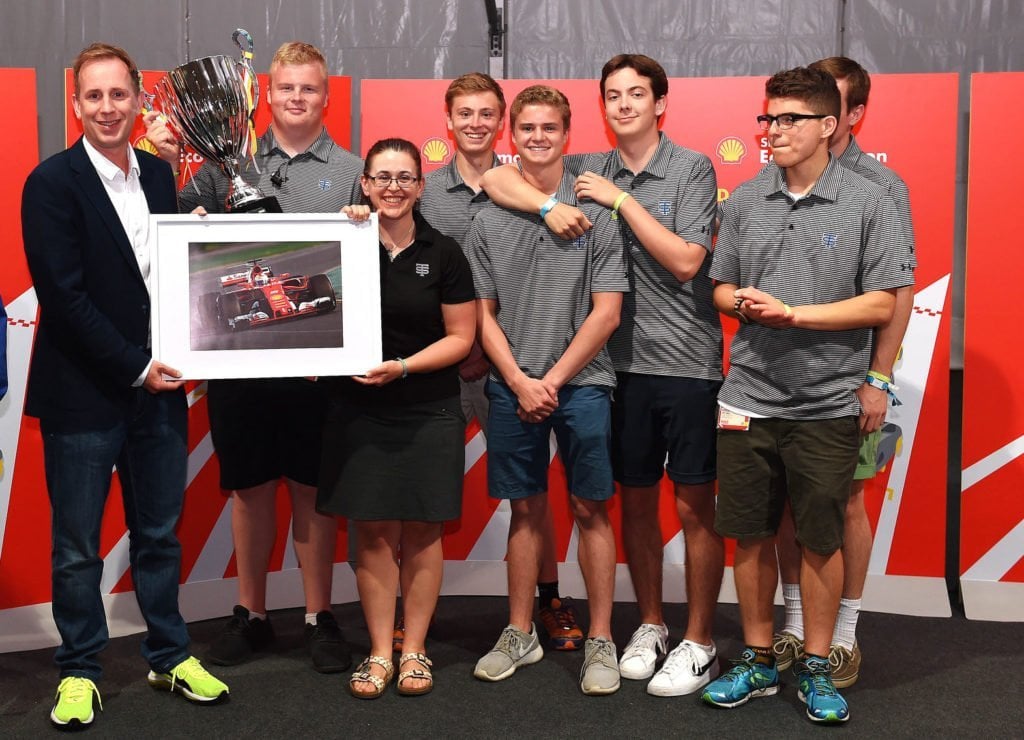 So you may ask, where do we go after winning a World Championship title? Perhaps it is time for our students to innovate with a fuel source we haven’t explored yet. A hydrogen fuel cell could prove just the challenge our team needs. I’ll let you know how it goes in August when we start building again.