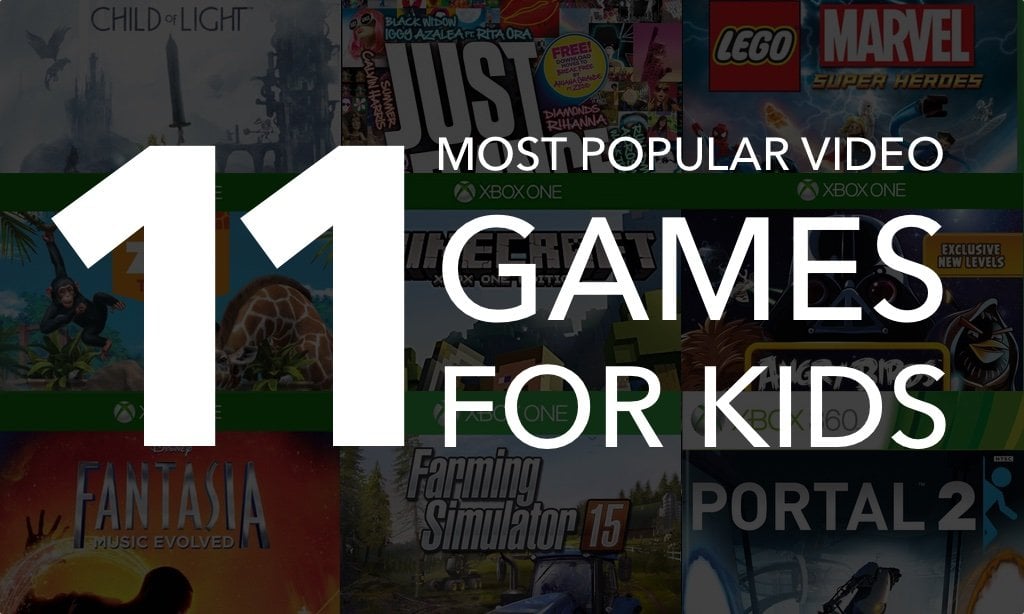 Video games and especially video games for kids can be quite a fiery topic. Do they enhance intelligence? Are they too violent? Do kids spend too much time in front of the television? While there is plenty of research to back nearly every conflicting viewpoint, for me it’s all about balance. Find the right game, set sensible boundaries, and there is no doubt that your child will benefit, and thoroughly enjoy their gaming experience.

So, what is the right game for your child and what are the best video games for kids? Well, here are some of our favorites that are cognitively challenging, are non-violent, encourage physical activity and collaboration, and are a whole heap of fun. My own children play all of the following games – some more than others, but they enjoy them all. We went out of our way to include games that are great and not necessarily the latest trend, Everyone knows kids like Fortnite, but our selected titles are fun, different and make kids think too. We’ve partnered with Humble Bundle on every title we could so a portion of your purchase can go to vetted charities. What could be better than playing and helping others in need!

Most Popular Video Games for Kids

Cities:Skylines is one of those rare games that satisfies both the artist and analyst at the same time. It’s a GORGEOUS game – the artwork is really top-notch. Expansion packs allow for famous landmarks to be added to your city with ease. Some players just build in creative mode and use the fly-around camera to take screenshots of their cities for art’s sake.

In addition, it’s a full-blown city-simulator. You’ll need to balance your residential, commercial and industrial zones long with making sure you have enough fire, police and other municipal services to keep your citizens happy. The micromanager in all of us will get their fill deciding where to put roads, trains, power plants, etc. You don’t have to get totally in-the-weeds; but if you want to, the option is there.

SimCity was one of the first PC games i played – sadly the franchise has really suffered and isn’t worth looking at in my opinion. Luckily Cities:Skylines has stepped into the breach. There are a bunch of expansion packs available that continue to freshen up the game every few months – my boys like the Natural Disasters add on.

Must Have Game For Your VR Enthusiast

Created by two friends who thought the HTC Vive wasn’t getting enough cool software, this rythym-based virtual reality game is one of the simplest yet most addictive games I’ve played this year. It’s a pretty good workout as well. If you don’t have a VR headset, it’s fun enough to give you a reason to go get one.

Players work to keep the beat going by using virtual light sabers to chop and slash at virtual blocks hurtling towards them while avoiding hitting the bombs. The song selection is extensive and more songs are being added by the modding community all the time.

Like many good games, it’s easy to begin yet hard to master – leading to hours of fun. Add in the ability to play online against your friends in a VR world, and you are looking at a must-have title if you own a VR rig. Here’s someone’s mom learning the game to give you an idea of how actual gameplay goes – (don’t worry, I’ll get up some videos of my family playing shortly):

Ages: All ages that can wear a VR headset

While the dream of getting mankind to Mars is getting closer to being realized, it’s still years in the future. While we wait, young future space-farers can prepare by playing Surviving Mars.
In this game, you are in charge of the first settlement on Mars. You need to build your base using drones and domes, manage your resources and increase your research in order to grow your settlement. What’s really cool is the creators made sure to stay as true to science as possible when designing the game. While the “mystery quests” are more fantasy than fact, they do help make a fun game to play.
Note: This game has come a long way from the initial launch in early 2018. The gamehad some issues at launch – it felt more like a beta than a ready-to-ship game. Since that time, Paradox has worked to fix and improve Surviving Mars. The game balance and overall gameplay have really matured. My kids didn’t enjoy the initial launch version, but now play this game quite regularly. This is why you’ll see early reviews quite mixed – the game wasn’t great at launch. Don’t worry – it’s very enjoyable in it’s current form, and isn’t one to overlook.

I used to play Super Smash Brothers back in 1999. And Nintendo’s latest incarnation of the game, Super SmashBros Ultimate, is just breathtaking! Developed exclusively for their latest and greatest console, the Nintendo Switch (a very cool concept and especially worth looking into if you want the ultimate console for younger kids) Super Smash Bros Ultimate is the hottest game of 2018. With the ability to play as one of over 70 characters you know and love, this is just the best game to get kids playing and competing together.

For The Aspiring Programmer Who Likes To Play

Roblox is a free-to-play “imagination platform” for kids. This platform seems to be aimed at the 12 and under crowd from my experience. Over 64 million active players go on Roblox to play games made by community members. There are over 29 million games to choose from. One of the great things about this game platform is children can take their love of gaming and become a creator – anyone is allowed to upload their own games. There are tons of templates available to begin with, and then expand upon as your skill grows.

So what do people play on Roblox? As of the time I’m writing this, Pizza Factory Tycoon, Jailbreak, and Vehicle Simulator are among the most popular. That will change through time of course. It’s free to sign up and play – there are in-game purchases but they aren’t mandatory. It’s the game my son and his friends moved on to after they tired of Minecraft.

Ages: Everyone – though this is great for pre-teens in particular

Great To Get Your Kids Up And Moving!

With a star studded lineup that looks like the guest list for the Grammys, Just Dance 2019 will blow the minds of any music/dance lover. Easily one of the most popular video games for kids over the past few years, Just Dance encourages your child to get active and perfect their dance moves, choreographed to all of their favorite songs. They can compete against their past performances and even challenge friends anywhere in the world to beat their score.

Tractors, Horses, Farmfields – This Game Has It All!

It may sound like an unlikely video game for kids, but Farming Simulator has consistently been one of the biggest franchises in the simulation genre. Not just for kids from the country, Farming Simulator ’19 allows players to grow a giant working farm by tending to crops, harvesting produce, and selling goods. This is both a single and multi-player game, allowing for collaborative play.

The newest version has added many features. You now build your own farm and buildings, rather than just buying pre-made farms. This gives some creative freedom. Children will learn about biology, micro and macroeconomics while enjoying themselves. A surprisingly addictive and strategic game!

The video above is a quick walkthrough by Quill18. He does a great job giving you a feel of what the gameplay is about. If you are on the fence, take the time to watch the video.

This light-hearted cooking game is specifically built to be played together by families on the same PC or console. You’ll journey through the Onion Kingdom working in various kitchens in order to stop the attacks of The Unbread!

It’s a great game to teach teamwork and bring children of various ages together. Your children will also learn something about cooking through the game – though it’s more like a commercial cooking simulator than an Easy-Bake Oven. The graphics are whimsical, and the varying kitchen locations will keep children occupied for a long time. You’ll even enjoy playing with them!

LEGO is far and beyond my most recommended toy for learning and play. LEGO Supervillians is the latest LEGO videogame. The story is silly – The Justice League has disappeared, only to be replaced by a shady group called “The Justice Syndicate”. This leaves the traditionally evil characters in a role-reversal – protecting the citizens of Gotham City.

That said, it’s a lot of fun. It’s the same quality you’d expect out of a LEGO title. Your daughter or son will enjoy working through the storyline and then going back to clean up blocks they might have missed he first time through.

It’s Old – But Still The Best Puzzle Game Around

Portal 2 has been around for a while but it has not lost even a fraction of what made it such a huge hit. Still one of the best puzzle games ever created, Portal has players jumping through futuristic gateways to progress from level to level. Requiring a thoughtful and imaginative mind, Portal is a great option if you are looking for a fun, brain-stretching puzzle game to entertain and challenge your kids for hours.

Minecraft would have to be the ultimate starting video game for kids! Its success with children, parents, schools, teachers, and everyone in between has been beyond incredible. Kids can create and explore their very own world where the only limit is their imagination. With players around the globe building and creating together, Minecraft ticks every box; it’s educational, social, creative and an endless source of fun.

So what other video games for kids would you recommend? Share your favorites in the comments below!

Affiliate Disclosure: Depending on the link you choose, we will get a slight payment for purchases made through Amazon, HumbleBundle and the Microsoft store – at no cost to you. These help defray the cost of research and running this site. In addition, if you purchase through a HumbleBundle link you may choose a charity to donate a portion of your purchase price to from their vetted list. See the HumbleBundle site for more details.
Bryan Bigari