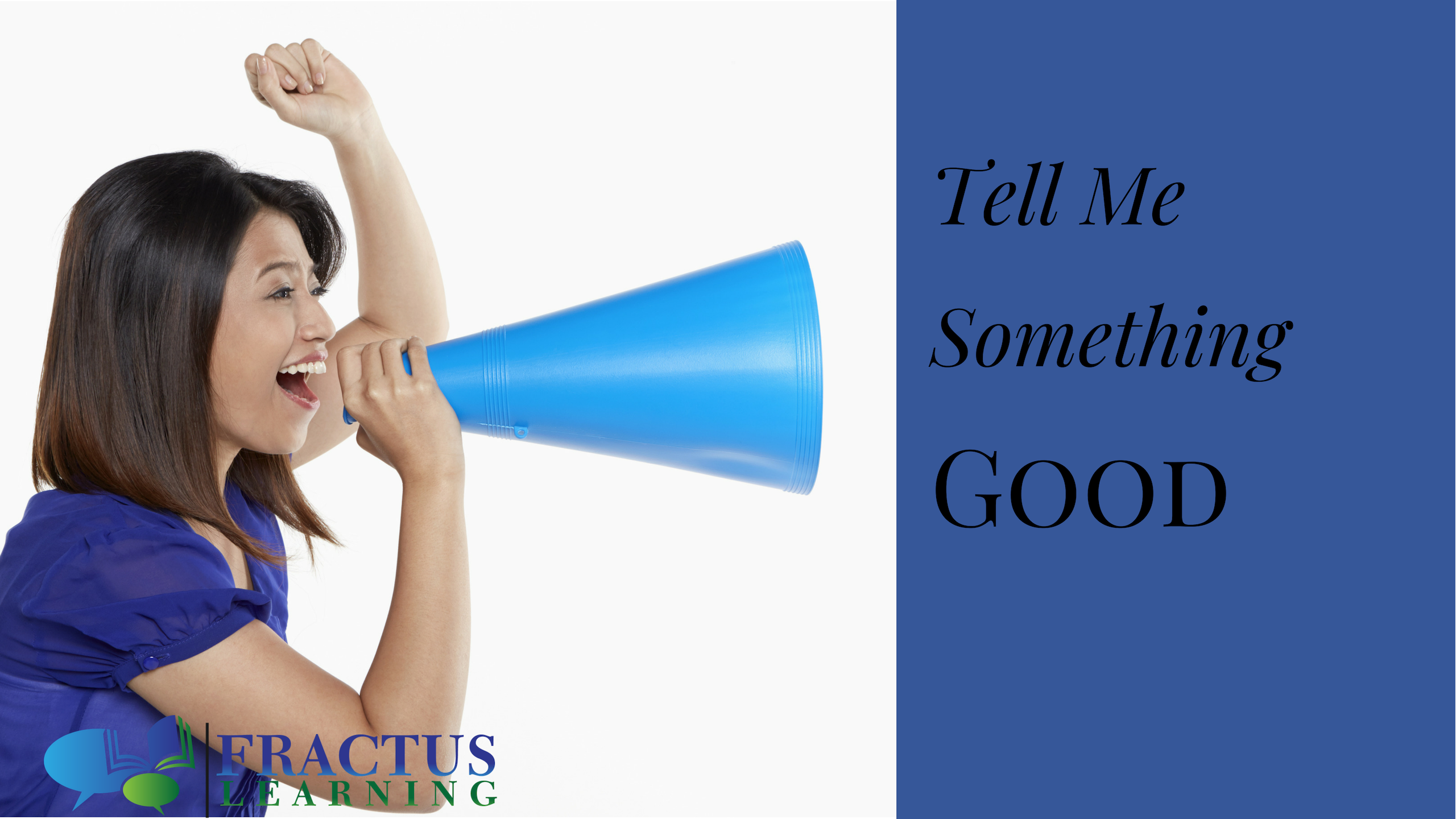 Nothing.  No takers.  Crickets.  Less than crickets.  Really, more of that open, expansive silence you get in a room that is badly in need of a voice or two.   I am undeterred and follow my usual teaching axiom — Every idea sucks for a few days. This one is no different.  I look and sense a child wanting to talk.  We make eye contact.  I give him my greatest look of teacher encouragement.  It is returned with an open-mouth yawn.  I go in again.

“Somebody tell me something good.”  It’s a summer SAT class at the local junior college.  Two weeks, a few hours a day.  The kids come from three or four neighboring high schools, so nobody knows anyone.  And nobody is willing to reply to my request.  No worries.  I’ve waited out far worse.  I turn to a boy in the first row. “Tell me something good.  Please.”  He is quietly agitated by being singled out within these first few minutes.  I get the usual buffet of teen annoyance body language.  I get the classic eye roll, followed by an exaggerated slumping of the shoulders, and topped with a deep sigh.  He looks up and shrugs.

“Okay.  What did you have for breakfast this morning?”  After another sigh to make it perfectly clear that he is not a willing participant, I do get an answer.

“I love blueberry bagels.  You toast it?”  This seems to catch him off guard, and I see what might be the quivering ends of a smile.  He won’t give it to me, but I caught it.

“Did it get stuck in your toaster?”  And there it is.  A smile.  Somebody in the back actually chuckles.  “Because bagels and toasters have been mortal enemies for centuries.  Even if you cut it evenly, just a frayed end of bagel can catch in that barbed wire inside the toaster.”  A few very slight chuckles.

“I’ve been cutting my own bagels for a while.  It didn’t get stuck.”

“Thank goodness,” I say.  The seed has taken root.  “Alright, everybody be ready with some good news tomorrow.”  And we move into writing and test-taking strategies.

The question is simple, but not my own.  I had recently attended a training entitled “Capturing Kids’ Hearts.”  The idea is that if you never capture their hearts, your chances of capturing their minds are slim.  The program is a systematic approach to setting a classroom tone and a means to build authentic relationships with your class.  The question is one small part of the program, but this is only a two-week summer class.  It’s as much as I’m attempting this go around.  If it helps me build a good rapport with a two-week class filled with kids from four or five different high schools, then it’s a keeper.

Tomorrow morning, I’m hoping to build on yesterday’s toaster bagel success, but to no immediate avail.  I stick to my mantra.  Every idea sucks for a few days.  This is still within the sucking window of “a few days.”  Yawns and silence.  Everywhere.  No one has brought some good news to class.  I turn to my new, very reluctant friend.  “What did you have for breakfast this morning?”  He laughs.  Several kids laugh.

“And do you slather that blueberry bagel with cream cheese?”

“Of course not,” he says and gets some genuine laughs.  He likes this sort of attention and leans all in.  “Cream cheese would overpower the very subtle taste of blueberries.”  And someone else finally jumps in.

“What about an onion bagel?”  He wasn’t really expecting a Q and A about his bagel habit, but he plays along.  “You have to,” he says very knowingly.  The other kid smiles.

“I know, right?  Because the onion is powerful, and you need a lot of cream cheese to balance it all out.”

“Exactly.”  A few more chuckles, and after an awkward pause, a hand goes up in the air.

“Today is Taco Tuesday at my house, and my grandmother makes amazing tacos.  I think about them all day.”

“Are you thinking about them right now?”  I ask.

“I’m sorry, I was thinking about tacos and didn’t hear you.  What did you say?”  It turns out to be a room of comics.

We can’t seem to move past food for the next few days, but the conversations come naturally.  And it carries over into the rest of class.  There is an easy exchange of ideas.  Kids, total strangers, easily work with one another.  It’s as if we’ve been a class for a full school year, but it’s only Thursday at this point.  If you’re keeping score at home, my first friend has had a blueberry bagel every morning.  It’s how we start each sharing of good news.  And a deep curiosity has started.

“Will Trevor have a blueberry bagel tomorrow?”  It would complete the week.  Five days.  Five blueberry bagels.  This seems to be the collective question the class is pondering.  A few kids have placed small bets.

“We will have to wait until tomorrow morning.”  I turn to Trevor.  “Tell no one when you get here, sir.  Stay strong.”  He smiles and agrees.

Sure enough, tomorrow is buzzing about the blueberry bagel.  True to his word, Trevor has confided in no one.  Before he tells us, we have a full debate.  We take a tally as to who thinks he has had a blueberry bagel and who thinks he has ditched them for something else.  The room is leaning towards blueberry bagel, but there are enough dissenters to make it interesting.  Before the big reveal, kids must justify their opinions on the matter.

“Look, most of those bags of bagels have six bagels.  So, there are enough bagels.  He had one today.  That’s five.”  Someone from the other side of the debate takes issue with this logic.

“Exactly.  Only six bagels.  You’re telling me no one in his house has had one of these bagels?  I think it’s reasonable to assume that a few have been eaten and they are out of blueberry bagels for the week.”  A few people mull this over.  It’s sound reasoning.  After a few more good points, Trevor reveals that he did, in fact, have a blueberry bagel.  The room erupts almost like a sporting event.  It calms down after a few and I am ready to move on with citing the right evidence on the essay portion of the SAT.  But someone is not.  A hand shoots up.

“Hey, I’ve got something good to tell.”

“I’ve got my first date ever tomorrow afternoon.”  This draws a spontaneous and real genuine applause.  He adds, “I mean I made out with a girl at a party once, but I don’t really count that as a date.”

“Maybe she did,” someone adds, and the room laughs.  Every new idea sucks for a few days.  Until it doesn’t.  We went from breakfast foods to first dates in the span of five classes.  Ten hours in total.

All of this started because a kid shared that he had a blueberry bagel on Monday morning.  It’s out there.  The kids want this.  They so badly want real and validating bonds with decent, kind adults.  If you’re teaching, the odds are you’ve nailed the kind and decent part.  Now just put yourself out there a little more.  Just a little more.  Because eventually, they will all want to tell you something good.  Many are just waiting to be asked.