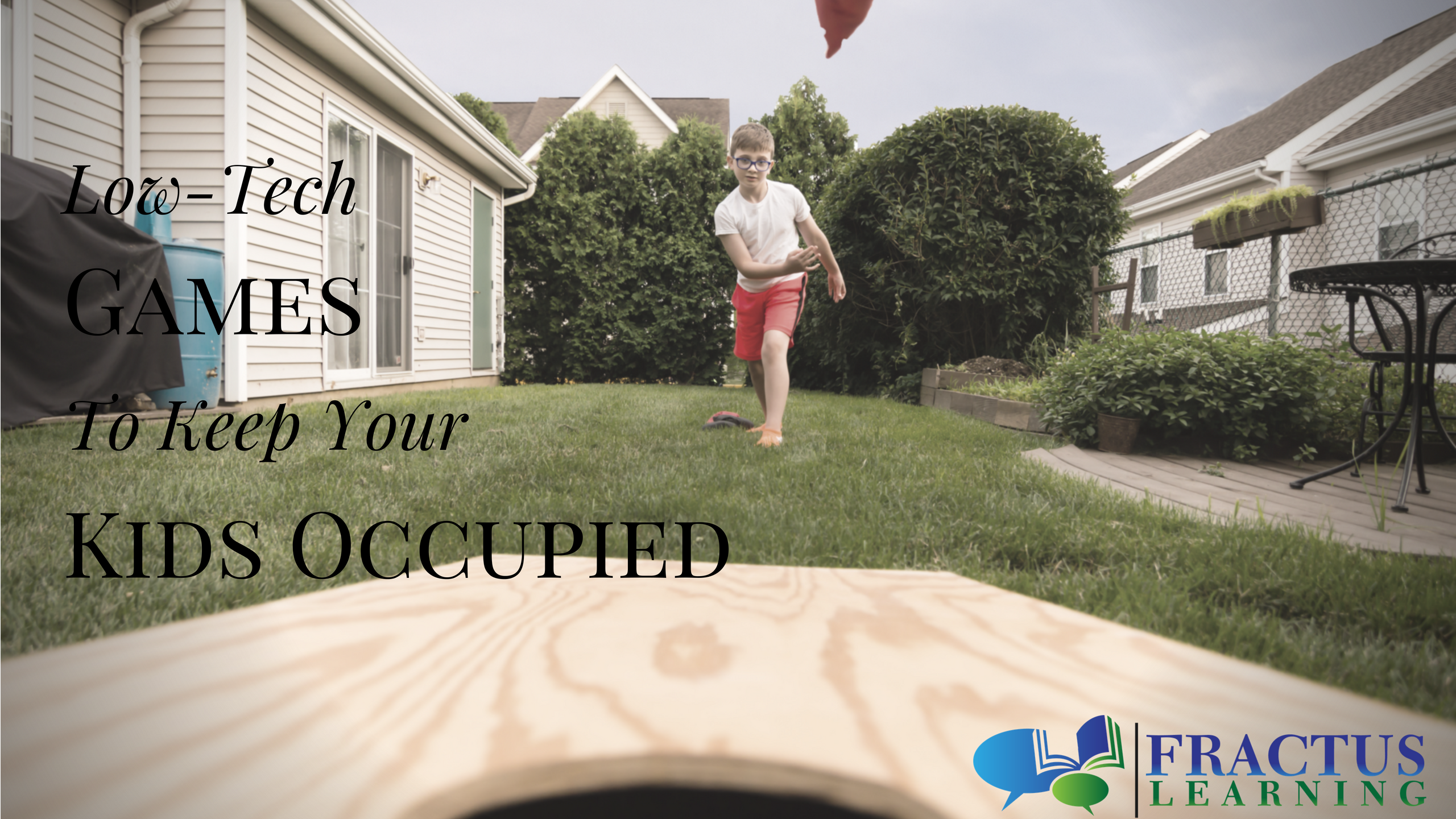 Each day across the world, there’s a battle going on – fought household by household.

It’s waged by adults wanting their children to get off the screens and back into the real world.  Children resist, usually with the opening gambit of “I’m bored, there’s nothing to do.”

Consider this article your supply-drop to the front lines.

We’ve come up with a list of four classic low-tech activities to get your child off of the screen and back IRL. Instead of having your kids glued to a television screen, laptop or other devices, keep them occupied with one of these games. Most of these games require nothing more than a deck of cards but will teach your children interpersonal, math and fine motor control skills that will benefit them throughout their life. 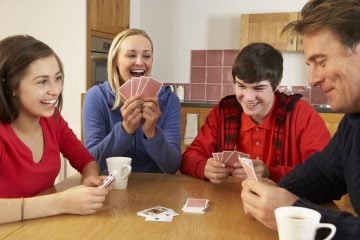 Euchre is a trick taking card game that requires subtle playing for players aged 10 and older. The object of the game is to score the most points in a certain number of rounds. A round is won when at least three tricks are won.

Rules of How to Play Euchre

The first player who receives a Jack when cards are dealt face up is the dealer. Deal five cards clockwise to each player.  You can deal in groups of 2s and 3s or 1 card at a time.

Play one card at a time. Whoever plays the highest card of the same suit or a trump card in a round wins the trick.

Place the pack of cards faces down in the middle of the table with the top card face up. If any player accepts the top card as trump, the dealer may exchange it for another card in his hands. He doesn’t pick up the card; the card is left as a played card. The card in his hands that he exchanges it with is placed face down on the table.

What's this trump suit?
The trump suit represents the highest or “boss” suit. This means any trump card beats any other card not in the trump suit. Euchre rule require you to follow the suit that the first player leads (play a card in the same suit) unless you don’t have any cards in that suit. If you can’t follow suit, you can play a trump card and win the trick (unless someone plays a higher trump card).

If none accepts the face up card as the trump suit, then the person to the left of the dealer may name a trump suit but not the same as the face up card. If all four players pass this round without selecting a trump, the cards are shuffled, and a new hand is dealt.

The player who fixes the trump suit has the option to play without his partner’s help. If he choses to do so, he declares “alone,” and his partner places his cards face down.  This is done when the player is confident he will will win 4 or 5 tricks.  Usually, you’ll need to have the top three trump cards (right bower, left bower, trump ace) and a off-suit ace to try this maneuver.

If a player succeeds in winning all five tricks, she is rewarded with 4 points.  If an Alone player wins 3 or 4, they only get the normal 1 point for their effort.

The opening lead is made by the one on the dealer’s left. Each player follows the suit lead. If unable to do so, the player may discard another card or play a trump. The winner of the trick leads next.

A hand is won when scoring the most tricks in the hand which means three to five tricks. Winner is first team to ten points. Score is often kept by using a combination of the 6 and 4 cards for each team.  To begin, he 6 is kept face-up, with the 4 face down. As a point is earned, the 4 is moved to reveal a spot on the 6-card.  Once 7 points are earned, the 4 is flipped over and the face-up six card covers reveals one spot on the 4.

Of course, you can use paper and pencil – but where’s the fun in that?

For more information on everything Euchre, check out ohioeuchre.com. 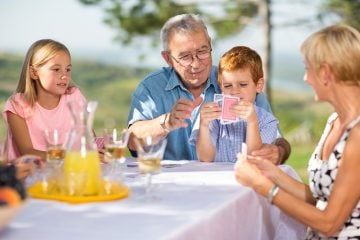 The object of this multiplayer card game is to get rid of all your cards through cunning and skill, aka bluffing. Honesty is not one of the rules of the game. Players can lie about the face down card placed on the table. He is only caught when someone calls his bluff.

The game is also called Cheat, Doubt It, Bluff, and Liar.

Rules of How To Play BS or Peanut Butter

All the cards are dealt. Depending on how many players there are, some may have more cards than others. It doesn’t affect their chances of winning the game.

Strategy is involved by both determining when and how many cards to bluff, and when to challenge a player (meaning you think they are bluffing).  For example, a player might hold 2 3s in their hand, yet discard 3 cards – say two 3’s and a King.  They might also decide to only put down the two actual 3’s they hold in their hand.  It will depend on how likely they think they will be challenged by another player.

When a player challenges another player, the challenger says “peanut butter” or “BS”.   The cards just discarded are turned over to check if the last player was bluffing or not. When caught in a bluff, the guilty player takes the entire discard pile into his hands. If the upturned cards were correct and the challenger was wrong, the challenger takes up all the cards in the discard pile.

In general, it pays to challenge more in the very beginning (when there’s little consequence for being wrong)  and near the very end of the game (where stopping a player about to win takes on more importance).  Likewise, bluffing is more likely to succeed in the middle of the game (at least when the pile has grown to a big amount).

More information (and some rule variations) are available here. 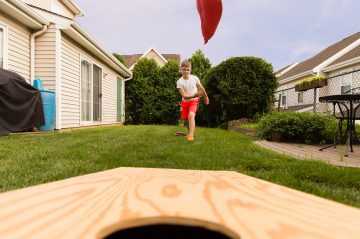 A fun outdoor game where players compete by attempting to score when throwing a bag of corn into a hole on a raised wooden platform. The winner is the first player to reach or exceed 21 points.  It’s often played at picnics, tailgates, and other outdoor events – but you can play it in your backyard at anytime.  Setup takes less than 5 mins.

Rules of How To Play Cornhole

The following rules are for a “competitve” round of cornhole.  Most social events are more relaxed on some of these rules.  For example, I’ve never played where someone actually times how long you have to throw a bag.   It’s perfectly acceptable to modify the rules to fit your particular social situation.  After all, it’s just a game.

A match consists of innings or frames. Each player throws four bags with each inning or frame. A player can throw the bag from the 3-foot pitcher’s box that is to the left or the right of the platform.  Usually this is not drawn on the ground – just make sure you are throwing behind the imaginary line tangent to the end of the platform.

Each player has 20 seconds to throw the bag. The time starts the moment the player steps on the pitcher’s box.  After each round 10 seconds is allowed for the beans in the bag to fall for the possibility of earning extra points.

If a foot passes the front of the board before the bag leaves the player’s hand, a foul can be called.  A foul throw can’t score any points.

The game is played as singles or doubles (4 players with two players in each team). With doubles one member from each team pitches from one cornhole platform and the other from the opposing platform. The competing players at the one platform take turns in throwing their bags. When all four of their bags are thrown, the players at the opposite platform pitches. 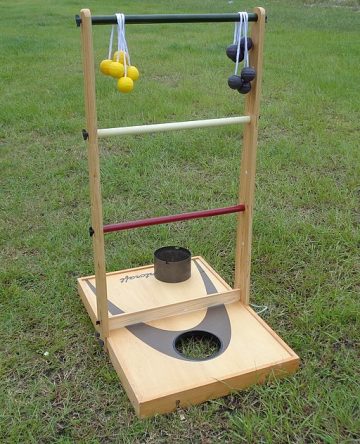 The object of the game Laddergolf is to wrap your bolas around the three steps of the ladder to score points.  Winner is the first to 21. It’s also known as ladder toss and ladder ball in some parts of the world.

Rules of How To Play Laddertoss

Each player tosses three bolas in consecutive order. Bolas are tossed one at a time.

The bola can be tossed any way the player wants to, but it has to bounce off the ground before reaching the ladder steps.

The winner needs to score exactly 21 points in a round. In other words, if the player has 19 points and there are 5 points on the ladder, he doesn’t win that round. He starts the next round with 19 points again.

With a tie, the players will continue until one player has 2 points more than the other player.

Points are earned by bolas hanging on the ladder after each round. Knocking players’ bolas from the ladder steps is part of the fun.

What other games do you use to keep your kids occupied that is fun and doesn’t need to be plugged in? Let us know in the comments below.