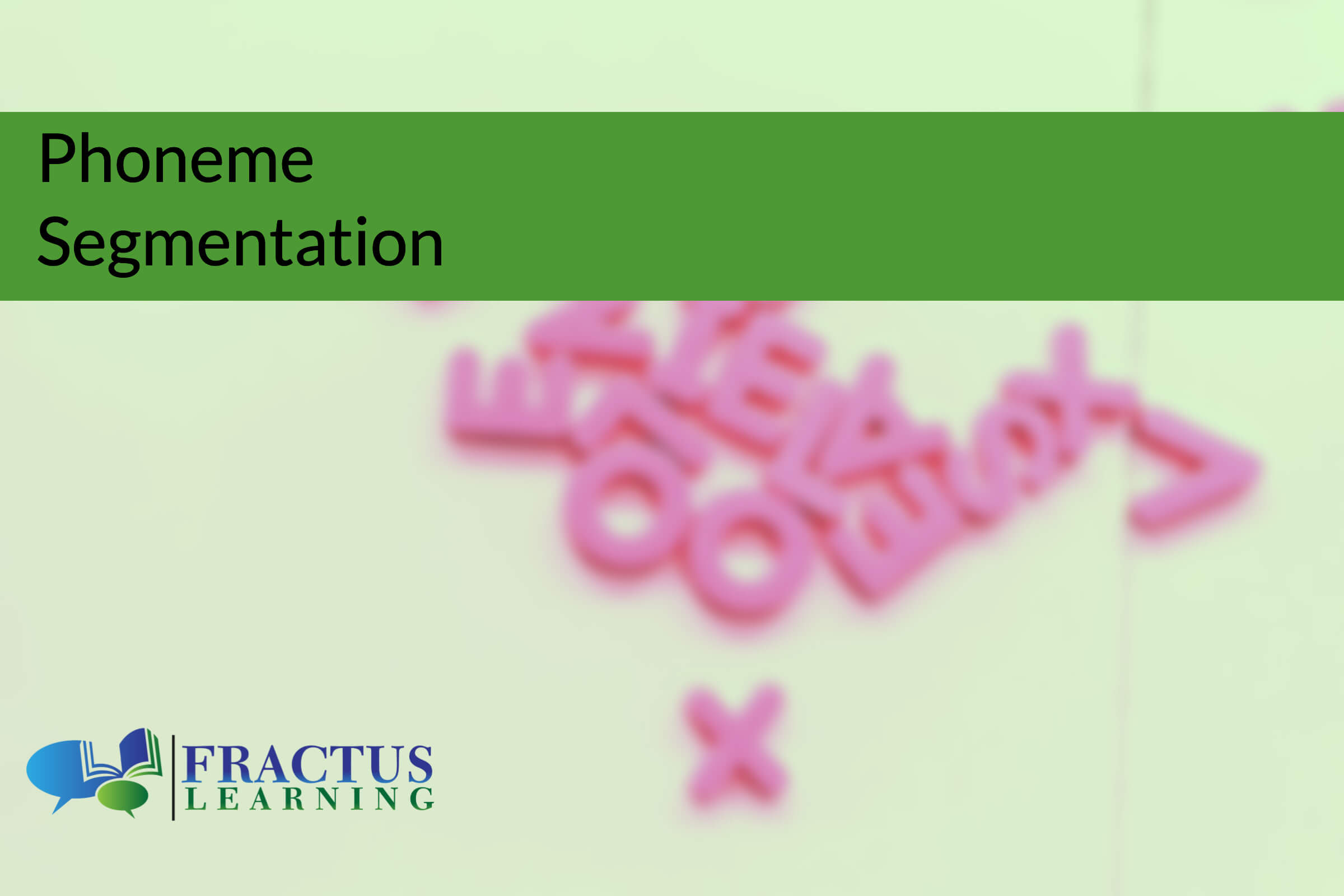 What Is Phoneme Segmentation?

Mastering phoneme segmentation is a phonological awareness skill; it is the ability where students break words apart into individual sounds. For example, the word bat has three sound segments /b//a//t/ and the word swing has four sound segments /s//w//ee//ng/.

Students with phonemic awareness skills hear each sound in a spoken word. They can break apart (phonetically segment) a word into these individual sounds and blend sounds in different combinations to form new words.

What Is Word Segmentation?

Word segmentation is another way to describe phoneme segmentation. It breaks down a word into component sounds, whereas phonological awareness starts with identifying individual words in a sentence.

When teaching reading and spelling, sound walls are effective methods to teach phonemes. In 2000, the Nationa Reading Panel found that teaching phonemes are a critical part of learning to read and spell. Instead of traditional word walls, teachers use sound walls that organize words according to sounds. Children learn sounds and make different graphemes that later help with spelling.

Why Are Phoneme Segmentation Skills Important?

Phonemic awareness is the early step in acquiring literacy skills; hearing the sounds in a spoken word is part of the basic reading process. It teaches students to understand the relationships between sounds, letters, and letter patterns. Phonemic awareness helps students with reading, spelling, and writing.

Kids struggle to read because they can’t segment initial sounds in words. They need the ability to decode words to learn to read fluently.

Phoneme Awareness Skill According To Age

Parents may wonder which phoneme segmentation skill their child should have mastered at a specific age. This guide indicates a child’s skill level before their first school year.

Teachers use phonemic awareness activities to teach phoneme segmentation.  The spoken language is a continuous stream of words and not small bites. With phonological processing, students learn to differentiate between the words in a spoken sentence. When the child has mastered oral segmentation, they are ready to segment words into syllables.

These hands-on activities are engaging ways to teach the basic elements of phonemic awareness. Letter cards, task cards, and other activity materials are easy to prepare. Students clap or practice with game activities the letter sounds as they appear in words; these activities are excellent for CVC word lists.

Students in Kindergarten are ready to learn phoneme blending and segmenting words. Phoneme segmentation training starts with simple phonemes and scaffolds. Teachers demonstrate to the students how to segment initial sounds in words. Then the students practice by saying the word aloud, differentiating between the first sound, middle sound, and ending sound.

Phoneme segmentation activities are fun and engaging ways to teach children to blend and segment phonemes sound by sound.

Bingo is a fun game. Cut an egg carton using it as individual slots and place a magnetic bingo chip in each space. Say a word with 2-5 phonemes and have the child pick up a bingo chip with each sound working from left to right.

Teachers can also use bingo chips on CVC cards. Students begin by placing the bingo chip in the appropriate colored circle.

Place touch-on night lights in a row. Give the child a word with 1-4 phonemes and let them tap a light each time they say a sound. You can use the same method by tapping the on-lights to turn them off with each sound.

Color-coded picture and word cards are fun puzzle games to teach phoneme segmentation using CVC words (consonant-vowel-consonant). Each phoneme has a different color. For example, beginning sounds are red, middle sounds are green, and ending sounds are yellow in all the picture cards. The broken cards feature a letter and part of a picture.

Teachers can also use CVC sliders where the children slide the beads as they orally segment each word and tap on the dots on each slider card.

Smash The Sounds is a fun phoneme segmentation activity for small groups using playdough. Each student makes a ball for each sound in the word, for example, three balls for words with three sounds. They smash a ball as they say each sound in the word. Hand motions help to reinforce the concept, and smashing the playdough balls is entertaining.

Sound boxes are an excellent exercise for 3- and 4- phoneme words. The teacher draws the number of squares or boxes on an interactive whiteboard representing a syllable phoneme (not the letter) in the word with a dry erase marker. For example, “dog” has three sound boxes, and so does “wish,” but the word “frog” has four.

Teachers can use magnetic letters or letter tiles representing each sound. Students slide a magnetic letter into the box when they say the phoneme. Dry erase spelling cards with sound boxes work well for CVC words when children learn to write and spell.

Mirrors are great resources to help students in second grade struggling to read. Segmenting phonemes is critical for successful decoding, which is necessary for reading. Give the child a mirror and have them look in the mirror when they say the word.

The teacher asks the child to say the word quickly, then slowly, stretching each sound, and then one sound at a time while looking in the mirror. The child will notice their lips form the same way each time for a sound. The visual connection will help them identify and decode words.

Dressing The Baby is one of the most engaging phoneme segmentation activities for girls and boys. Students work in a group to dress the baby. A doll with clothes scattered around it is placed in the center of a group of children. One child at a time has to say one piece of clothing using phoneme segmentation. If the child says the sounds correctly, they can dress the baby with that item.

The teacher looks at and sounds out the object in the classroom. Children have to blend the sound together to identify the entity. For example, I spy a /b//a//l/, and the children blend the sounds forming the word ball.

Use 12 picture cards for this activity. Go through the deck and have the children name the pictures. Bring out the puppet and layout three cards from the deck at a time. The puppet says a sound, and the children must identify which picture-word starts with that sound.

Phoneme jumping is a fun exercise for children who can’t sit still. Instead of tapping or clapping, children practice their phoneme segmentation skills by hopping or jumping at each sound in words. Children can hop in one place when saying each sound, or the teacher can use sound boxes. Write for each sound a sound box on the floor for kids to jump in or hop over when saying the sounds in words.

Stretching and blending words are excellent early morning work for the whole class. The teacher gives the word, and the children say the word by stretching the sounds as a group and then blending it. For example, the teacher says the word diver, and the students stretch the word /d//i//v//er/ and then blend the letter sounds into words, namely diver.

Use several picture cards of 2, 3, and four phoneme words and a game board with squares leading to a finishing line—select items like cubes, dice, chips, or erasers for game pieces. A child draws a card from the pile and says the word aloud. For each individual sound the child says correctly, they move their game piece on the board. The student who crosses the finish line first wins.

The Yopp-Singer test of phoneme segmentation is an oral test. The children don’t see the word list, and the score reflects the number of items correctly segmented. Children who score between 17 and 22 are deemed phonemically aware.

The word game is for children to determine how many sounds are in words. The teacher will say a word, and the child responds by breaking the word apart and saying each individual sound.