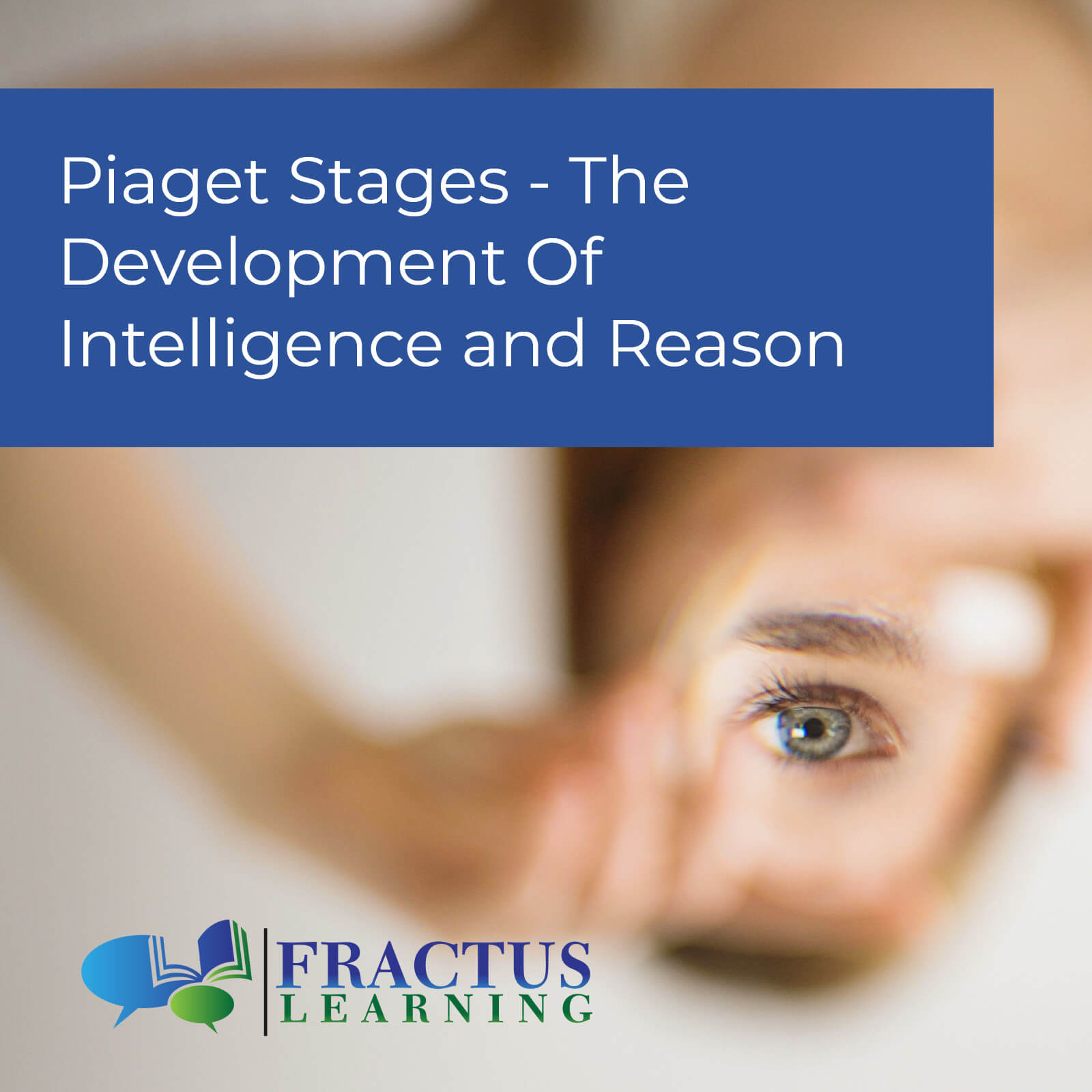 If you think that your child’s brain works differently than yours, then you agree with Jean Piaget, a Swiss developmental psychologist of the early 20th century. Although famous for his groundbreaking theory of cognitive development in 1936, Piaget’s career began as a teen; he was 11 years old when he published his first research paper on an albino sparrow.

His interest in intellectual development was piqued while working as an assistant for Alfred Binet, the developer of the first IQ test. Some experts may disagree with Piaget’s four stages, but today, Piaget’s theories are still used in psychology, genetics, sociology, and education.

This article explores the four stages of Piaget’s theory of intellectual development and how caregivers and teachers can practically apply it today.

According to Piaget, a child isn’t just a smaller version of an adult, but childhood is vital for human development. Piaget developed his stage theories by watching children develop and observing how their mistakes while solving problems were different in various age groups. Piaget studied children through their teens to discover their thought processes and cognitive developments. Watching his three children formed the foundation for many of Piaget’s later theories.

Like Lev Vygotsky, Piaget also believed children developed through stages. They differed in their approach concerning social interactions and culture. Vygotsky believed social interactions were necessary for learning and development, and Jean Piaget thought even children learned through doing. He believed children construct schemas, and growth occurs through continuous adaption and expansion.

Underlying assumptions Jean Piaget made about his child development stage theory were:

Piaget believed intellectual development followed a sequence through four distinct stages from birth to young adulthood. Each stage had new cognitive skills and a more complex understanding of the world than the previous stage. Although Piaget admitted children could go through a stage at a different age, a child couldn’t skip one of these four development stages.

The sensorimotor stage of cognitive development is a time of tremendous learning, development, and growth. During these early stages, from birth to two years old, infants are only aware of their immediate environment; they discover their world by their actions (touching, tasting, grasping, sucking), what they see, hear, and their physical interactions.

Everything they learn is based on trial and error; they experience by interacting with their world using their senses and motor skills.

From birth to 1 month old, a child understands and interacts with their environment through inborn schemas, mainly looking and sucking.

From 1-4 months, babies learn to coordinate sensations as they endlessly repeat basic schemas like looking, sucking, and grasping. Although they can’t connect their physical actions with results outside their bodies, they repeat actions that they experience as pleasurable.

Babies from 4-8 months of age begin to understand the object concept. Through trial and error, they become aware of results outside their body. If they’ve already mastered an action, they could purposefully imitate the action.

Example: picking up an object like a toy and putting it in their mouth

From 8 months to a year, children develop coordination of secondary schemas; the child begins to show intentional actions. They understand that objects have specific qualities. Cross-modal transfer (information transfer from one sense to another) occurs, and new behaviors emerge that the child imitates by observing others.

Example: push something away to reach a toy

From 12-18 months, tertiary circular reactions lead to experimentation. Children are very active and purposeful as they explore through trial and error. They manipulate objects and play with toys in new ways.

The preoperational stage, representing toddlers and young children up to 7 years old, is the second stage of Piaget’s stages of cognitive development. Language development and symbolic thought are key concepts of the preoperational stage. Children use words and actions to represent objects they previously experienced. Preoperational children begin to use symbolic thought when drawing, pretend-playing, and role-playing; the child’s behavior grows as their mental imagery develops.

Children tend to consider their perspective and point of view as the only viewpoint. Although they can identify an object, they can’t differentiate between individual entities. For example, Piaget’s daughter recognized a slug but thought every slug she saw was the same slug.

Cognitive development is still intuitive and not based on logical thinking. During the preoperational stage, preschoolers can’t understand complex concepts like comparison, time, or cause-and-effect. Young children see the world from an egocentric point of view and do not understand people have different perspectives.

The child is now in elementary or middle school, becomes more aware of other people and less of themselves. During the concrete operational stage of cognitive development, the child learns that others may not think and feel the same way they do, and their thoughts and feelings aren’t necessarily the reality.

Unlike earlier stages where children struggle with the concept of conservation, concrete operational children begin to understand and use logical operations for inductive reasoning and how they solve problems. The child understands that a tall, thin glass doesn’t necessarily contain more juice than a wide cup. Although developing logical thinking, children are still very literal and concrete in their thinking process during the concrete operational stage.

Individual children can formulate hypotheses and test them against reality; use theoretical and abstract concepts for science and algebra, and solve problems using creative logic. Piaget tested children’s physical conceptualization with a simple experiment of balancing scales. He found that only at the age of 13 did children learn logical rules and develop cognitive abilities to form a hypothesis about where to place the weights to balance the scale. Piaget also tested the abstraction of ideas and found older children were more capable of creative solutions during the formal operational stage than younger children in earlier developmental stages.

Piaget’s theory had four main concepts that explained what was happening in each of Piaget stages of cognitive development.

Jean Piaget was the first to introduce schemas into theories of cognitive development. According to Piaget, a schema is a category of knowledge and the process of obtaining that knowledge. Children use schemas to understand and interpret their world.

Biological maturation and interaction with people, nature, and objects result in cognitive development. New experiences and information add and modify existing schemas; schemas must accommodate the new knowledge. Information that doesn’t integrate may cause cognitive dissonance (inconsistency in thoughts, attitudes, and beliefs).

Assimilation applies an existing schema to a new object, social interaction, or situation. Assimilation tends to be subjective because a person modifies knowledge and experience to fit in with preexisting beliefs or previous knowledge.

Equilibrium is the balance between assimilation (previous knowledge) and accommodation (new knowledge). Equilibrium moves development forward using assimilation to accommodate new information instead of constantly adding new schemas. According to Piaget, growth doesn’t happen steadily but with experiences; equilibration help transform a child from one stage to the next stage.

Imagine little adventurous scientists who need to experience, explore, and discover their world in sequential cognitive stages. Experiences children learn through doing help them build various schemas that they can expand on as they grow older. Caregivers, parents, and teachers can present children to the outside world to broaden their experiences of real and hypothetical situations.

Piaget’s theory could help parents decide what type of toys to buy their kids to support their cognitive growth. Introduce new toys when children engage in unstructured play; the toys should relate to the child’s concepts. Problem-solving toys and puzzles will help with cognitive development at later stages. Parents also support more cognitive development by answering their kids’ questions about the world.

The UK government instructed Lady Plowden and her team to review primary education in England; the psychological aspect of the report was based on Piagetian theory. Although Piaget didn’t explicitly relate his ideas to education, his views influenced teaching practices and educational policies; the Plowden report is an example of it. Discovery learning contributed to the significant transformation of the primary school curriculum.

Educators can use Piaget’s theory when deciding which syllabus is appropriate for students in the same grade and age. Curriculum flexibility, use of the environment, play in learning, learning by discovery, and evaluating progress are concepts expressed in the report.

Huitt and Haummel (1998) concluded that slightly more than a third of high school graduates in industrialized countries obtain formal operations. Adolescent and adult learners with limited understanding of abstract ideas and concepts can benefit from specific educational strategies.

A study done in Geneva examined the hypothesis that standardized Piaget theory procedures had different results in different societies. Without specific cultural experiences and formal schooling, development may stop at the level of concrete operations and not transition to formal operations.

Piaget’s stages help guide clinicians when examining and evaluating patients. A child’s thought pattern before adolescence is more rigid and simplistic. As the child matures, they become more empathetic and less egocentric. For example, a pediatrician won’t be alarmed if a toddler doesn’t understand abstract concepts. However, a clinician may become concerned with a teenager who cannot engage in hypothetical situations.

The effect of age- and stage-appropriate activities were studied in 56 people with dementia. The study also observed people with Alzheimer’s and how they may regress through Piaget’s stages of cognitive development, displaying each stage’s play interest. However, Piaget’s play descriptions weren’t appropriate for these patients.

Despite his magnificent contribution as a developmental psychologist, Piaget’s theory, like most theories, has its shortcomings. Piaget himself noted some, as mentioned earlier in the article. The main criticisms are:

Despite the challenges to the theory, Piaget made a significant contribution to intellectual development; he made people think about child development and the importance of experiencing childhood. We are no longer in a medieval society where seven-year-old children are seen as miniature adults with expectancies of working, legal consequences, and marriage. The developmental theories of the 20th century, and specifically Jean Piaget’s theory, made people realize children are children with different developmental needs than adults. Caregivers and teachers play an essential role in the mental development of children.