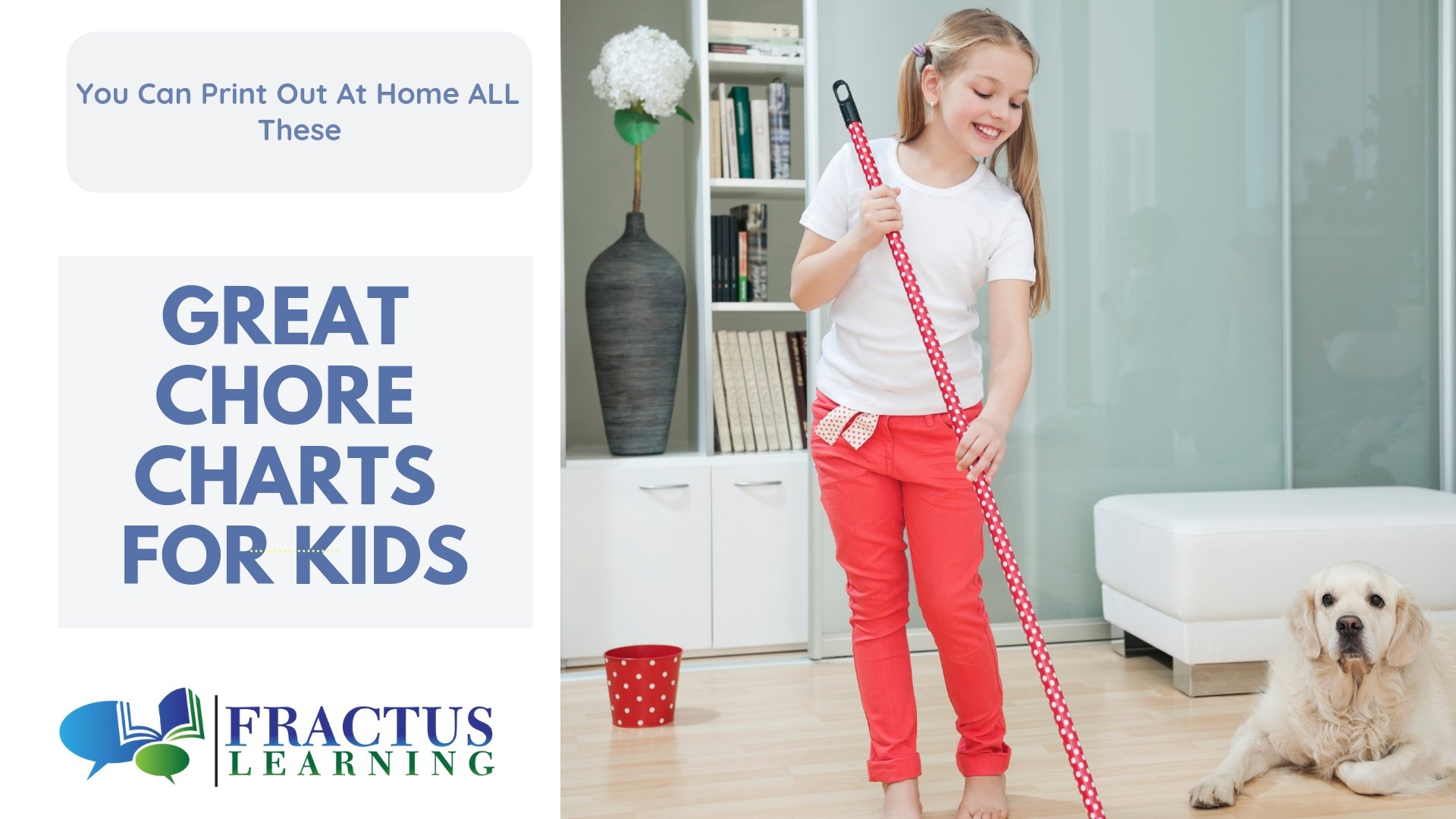 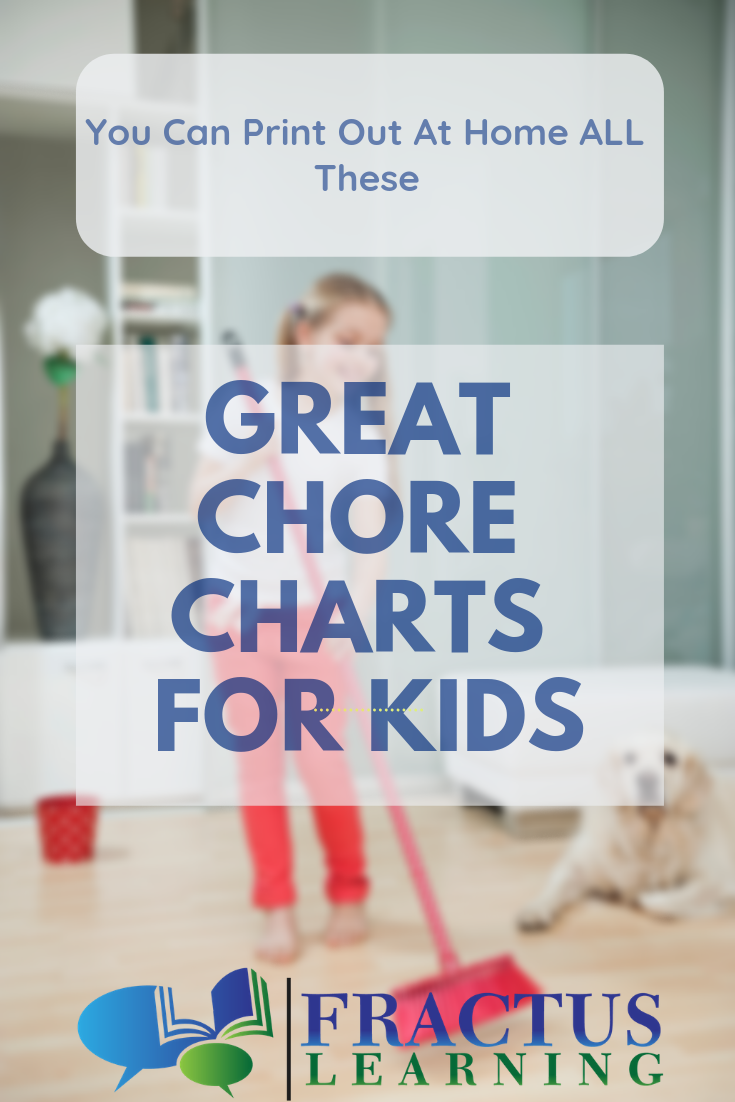 Many parents use chore charts to motivate their kids to help with chores around the house and to teach their children responsibility. Chore charts work, but sometimes it’s like a New Year’s Resolution. It starts with the best of intentions but isn’t followed through and soon forgotten…until next time…

For over 80 years the Harvard Grant study has been running – it’s the longest running longitudinal study in existence, and has been tracking Harvard graduates since the 1930’s.   It’s found that children who did chores became more independent adults.  Results showed that love and work ethic were the main keys to success and happiness. Chores are one way of developing work ethics in a child.

According to Marty Rossman’s research at the University of Minnesota, helping out with work around the house as a child contributes to being successful as an adult.  The likelihood of positive benefits including career achievement, completing educational goals, and rewarding personal relationships were enhanced through a structured program of childhood chores. Analysis of over twenty years of data showed this works was one of the best predictors of success.  The younger the child started with chores, the better the impact. This study showed 3-4-year old kids weren’t too young for chores.

The study also showed that the way tasks are offered to the kids played a role in them becoming well-adjusted adults. It was suggested that

Why Should You Use A Chore Chart?

Probably one of the greatest benefits of a chore chart is for you – you’ll have to nag less. The children know ahead-of-time the reward for completing all their chores – and the consequences if they don’t. The information and evidence are clearly displayed on the chart for all to see.

Other benefits of using a chore chart are:

How to Avoid Making It More Work For You

You are already reminding the kids constantly to do certain chores around the house. Creating a chore chart that won’t be used adds more work and solves nothing. Here are a few ideas on how to let the chore chart work for you.

If you don’t have the time or inclination to create your chore charts, download ready to use chore charts. We’ve listed a few practical chore charts below.  Some are free;others require either an email address or cost a small amount of money.

When you’ve chosen the appropriate chore chart and have trained the children how to complete the chores and use the chart, relax. Allow them to take the responsibility to do the chores and check it off on the chart.

Requires an email address:  An easy to use chore chart set up in a grid format. When the child completes a chore, they tick the box related to their name and chore. Use stickers, stars or smiley faces to represent each day of the week.

The grid chart is an incentive chart that promotes getting a reward for completed tasks. When all the boxes are checked for the day or week, the child receives the reward. There’s no deduction of checkmarks for lack of completing a chore.

Flip Down Chore Chart for Preschoolers

Requires an email address: Download separate chore charts for morning and evening routines. Fold and cut the chore charts along the gray lines.

Pictures of the chores guide the child in recognizing the type of chore. When they completed the chore, they pull down the picture.

A colored check mark is revealed showing that the chore is completed.

Free:  Fill in the chores to the left. Each chore has its own colored bubble under the day of the week column.

When completed the child draws an ‘X’ in the appropriately colored bubble.

Free: Each day of the week has four chores with images. Next to the image with the wording is a checkbox to tick when completed.

The chart contains chores the child can do by themselves. It also contains tasks that need practicing to improve skills.

Twice a week there is a “Mom’s Choice” chore. It is for the parent to decide what that chore should be and for how long.

Free (except for Lego Bricks):  This isn’t exactly a printable chart, but a cute idea nonetheless.  The example is using a Lego chore chart to save money. Write the appropriate monetary value and chore on each Lego brick. Store the week’s chores in a jar so that they can remove the brick when they completed the chore.

Then the child builds a tower with the completed bricks. Each row equals an amount of money, e.g. $1.

When the jar is empty, the child receives the money. A predetermined amount is set aside for savings; the rest the child can spend.

Post-It-Notes Chore Chart for All Ages

Free: The board contains a pocket with the person’s picture for each member of the family. To the right of the pocket are the chores on separate post-it notes with seven checkboxes. Use these check boxes to divide chores into steps or for repeating the chore daily.

When all the check boxes are ticked, the chore is complete and placed inside the person’s Post-It pocket.

At the bottom of the chart is a Bonus section with chores-for-hire. Anyone can complete these chores for a predetermined reward.

All the chores for different ages are available as free printable templates.

Fill in the chores for each Star Wars character, aka family member. The child ticks the checkbox for the appropriate chore completed that day.

Each child gets a chore ticket and 1-2 tech tickets for the week. The chore ticket needs to be punched before the appropriate screen time becomes available on the tech ticket.

Slight Fee:  Family members do chores for screen time. In other words, they earn the minutes they can watch TV, play games, and screen time.

Included with 70 downloadable chore cards are blank cards to fill in with personalized chores.

According to the website, this system proved to reduce screen time. By working for the screen time, kids learn the value of spending time with family and friends opposed to screen time.