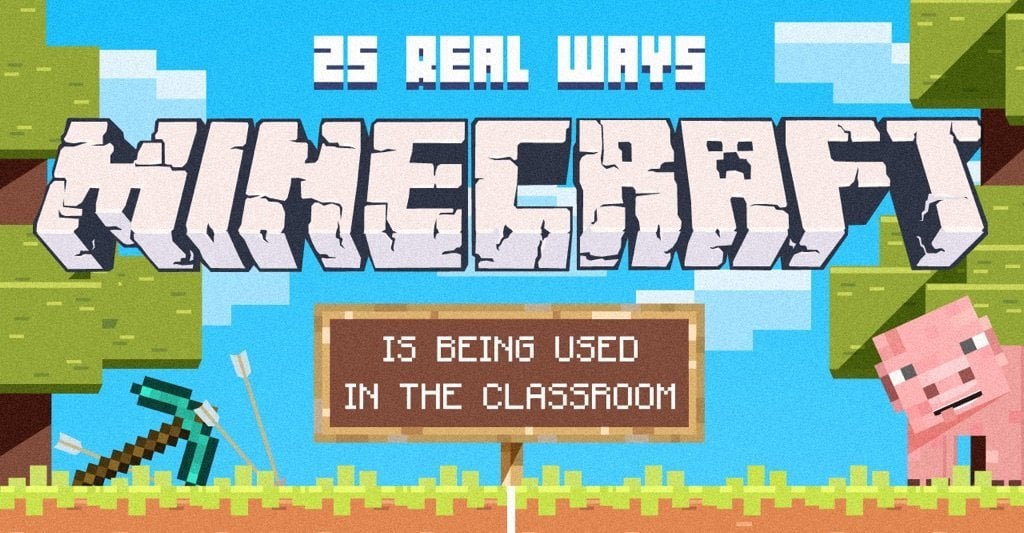 It’s hard to believe that just six years ago Minecraft was virtually unheard of. It was little more than a hobby project for creator and designer Markus Persson. Fast forward to 2016 and Minecraft has completely changed the way we perceive videogames.

Starting as a novelty in a handful of innovative classrooms, Minecraft is now a foundation of curriculums around the world and has found it’s way into popular culture, books, LEGO and even kid’s parties! From math to art to geography and even quantum mechanics, Minecraft and imaginative educators are turning bland subjects into incredible immersive learning experiences.

Minecraft in the Classroom by Fractus Learning is licensed under a Creative Commons Attribution-NoDerivatives 4.0 International License.

“Students measured every part of the school to calculate how many blocks they would need for each room and had to decide whether to round up or down measurements.”

“Digital spaces like Minecraft can instill in our students lifelong skills in communicating and collaborating effectively with people all over the world, regardless of race, religion or gender.”

“I have recently started developing a Minecraft scheme of work. They concentrate on creating the setting up of the different spaces in Minecraft and they show you how to use the NOT/AND/OR gates.”

“You might have students identify aspects of a theater, or use it as a tool for presentations. If you really want to go nuts, have students create these models themselves.”

“An English-language teacher in Denmark told children they could play Minecraft collectively in the classroom but with one caveat: they were allowed to communicate both orally and through text only in English.”

“Modding also has another use, and we think it’s the key to making Minecraft time productive. By modding Minecraft, children as young as seven can learn to code using the Java programming language.”

“Given the amazing freedom of this virtual playground, Minecraft books take on so many different forms. From handbooks, crafts, novels and activities, there there are so many books to blow the minds of young Minecraft fans.”

“Real experiments like this one often require a lot of money and time, and so we can’t really do that for every kid. Or can we? Doing real science in the virtual world of Minecraft a lot faster and less expensively than we could in the real world – and without having to get wet!”

“Students were asked to create a model of a sustainable city that used little energy. Students were able to build their cities as they saw fit and were given a particular role of farmer, builder, or miner.”

“There are also a whole load of treasure chests dotted around filled with goodies, puzzles and quiz books. Some are easy to find, others are fiendishly difficult. If you locate them all then you’ll probably have learnt a fair bit of chemistry along the way!”

“I’ve been using Minecraft for about a year now, I had seen people creating songs by Katy Perry and thought that it might be quite difficult. I couldn’t have been more wrong.”

“To evaluate the children’s understanding of rivers, I challenged them to build one on Minecraft. They had to include examples of all the features we had focused on and create it in a clear way.”

“As a result, most conflicts in Minecraft Club have been resolved in under 5 minutes. Students are learning how to advocate for themselves, resolve conflicts, and repair relationships in a peaceful manner… such valuable social skills in life.”

“Allow players of Minecraft to enjoy artworks like never before. Delve into imaginary worlds inspired by famous paintings and the real-life places they depict. Undertake challenges relating to the themes of each artwork, explore how they were made and hear the stories they have to tell.”

“Rube Goldbergs provide a way for students to demonstrate their understanding of Physics concepts in a physical way. Minecraft is another way for students to tap into that creativity when they don’t have access to a craft space or wood working tools.”

“Students login to Minecraft where I have recreated the setting of the vignette they have just read, complete with both familiar and new characters. The students interact with and learn more details and experience different perspectives about the scene which they record in their in-game diaries.”

“We are going to build a histogram representing our results of the data. I’m going to give you a Minecraft block to place at the correct place on this line of values. Put the block on the line at the place that represents the total number of mushrooms you collected.”

“I hooked the students with the game, but I was able to convey the important information of Punalu‘u that included pictures, mo‘olelo, and real life data.”

“Embedded in the design and the lore of the game are nuggets of philosophy, neuroscience, and psychology. From work/life balance to physical and mental health to the meaning of life Minecraft has something to teach us.”

“They were told to use 36 cubes to make the floor of a building. They had to make the model for the floor, draw a picture, record the info for the array and then find the perimeter.”

“One of the easiest ways to get your creative juices flowing in Minecraft is pixel art. Pixel art uses various blocks in Minecraft to create pictures.”

“From the definition of “number” to the commutative property of addition to the relationship between addition and multiplication. We explored some topics, like square roots, that were not part of my original plan but that emerged during the conversation.”

“Finding common ground between schoolchildren and quantum-mechanics researchers is no easy task. However, through a recent collaboration with Google, researchers at Caltech have created a new space for this unlikely interaction—in the world of Minecraft, a popular video game.”

“By far the greatest effect Minecraft has had on my students was a change in the classroom culture and attitudes about education.”

Are you doing anything exciting with Minecraft in your school? Let us know the real ways your students are learning with this amazing game in the comments  below.