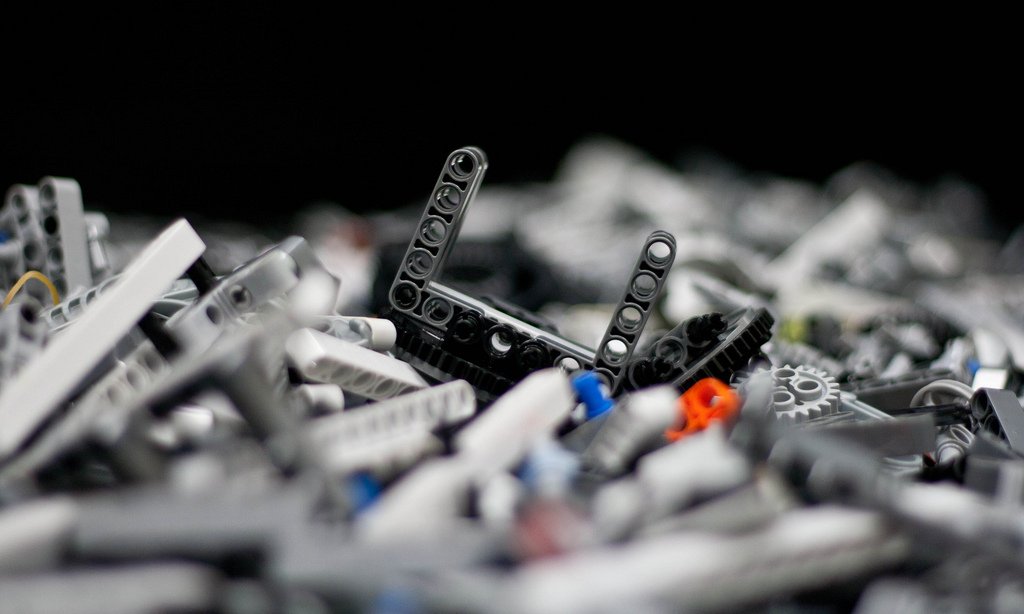 For years, LEGO has been at the forefront of innovative building kits for young makers and creators. Always looking for new ways to keep kids building and experimenting, LEGO has gone far beyond the static blocks we are all familiar with.

From  the best LEGO Star Wars sets to the best LEGO Technic kits,  there really is something LEGO for every age, skill level, and interest. Heck, there are even Lego games.  But the jewel in the ever-growing crown of the LEGO universe just may be the addition of LEGO robotics, and the maker sensation that is the LEGO Mindstorms EV3 building kit and programming platform.

What is LEGO Robotics?

LEGO Robotics is an all-encompassing robotics building and programming platform. With the single Mindstorms EV3 kit, makers can create, build, and program a nearly endless array of cool robots, vehicles, and machines. The kit itself includes detailed instructions for building five individual robots. There are plenty of projects out there created by other users. In addition, the LEGO website has building plans from LEGO and submissions from fans.

Why should you choose LEGO Robotics over other robotics platforms? LEGO has years of experience creating building kits for every age, interest, and skill level, and all that experience has gone into creating LEGO Mindstorms. The building instructions are excellent, detailed, and complete, a hallmark of the LEGO building system. For more creative makers, there is plenty of room for building your own designs and expanding the robots and machines. Finally, the programming platform is easily accessible and user-friendly and slowly introduces kids to its unique programming language. The programming software is available for a huge variety of devices, from Mac and PC to tablets. 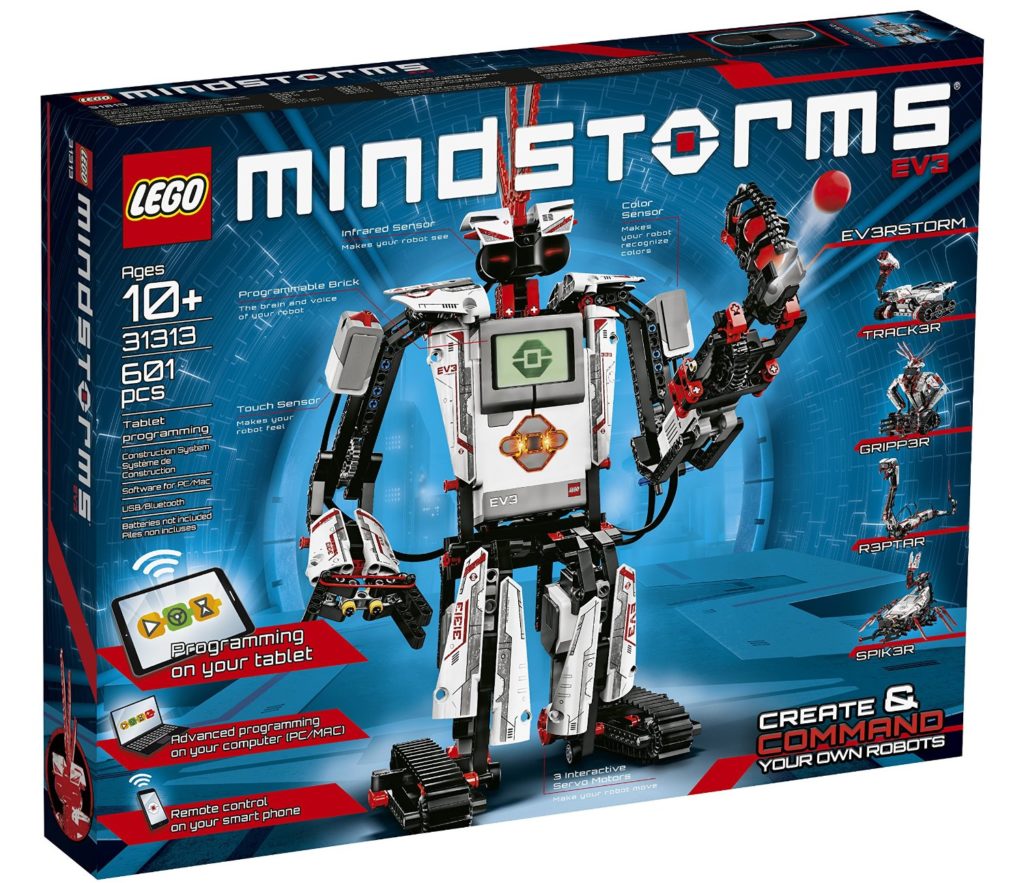 Opening up the LEGO Mindstorms box can be a little daunting. First of all, there are a lot of pieces and many that you may not recognize. If you’re new to LEGO robotics, there will be quite a few pieces that aren’t included in any other LEGO building kit. So, it helps to go through the pieces and identify and separate the various components. First and foremost is the EV3 brick. This is the programmable brick that is the control center and power for your robots. It contains a powerful processor, four input ports for connecting sensors, four output ports to connect and control motors. There is also a mini-USB port for connecting to a computer, a USB host port, and a micro-SD port to expand memory.

Next, identify the sensors that connect to the input ports. The sensors will collect information and relay it to EV3 brick. The brick will then process that information, relay it to the motors, and your robot will react. There’s a color sensor that recognizes seven different colors as well as light intensity. There is also a touch sensor that recognizes ‘touched’, ‘bumped’, and ‘released’. Also, look for the remote infrared beacon which controls your robot from a distance and allows for tracking.

Finally, identify the motors. There are two large motors for powerful robotic action and a medium motor that allows for faster movements. The medium motor also cuts down on overall size and weight.

These are the primary robotics components. There are also plenty of LEGO bricks, pieces, and accessories for creating an endless array of awesome robots.

Now it’s time to choose which robot to build. Most makers recommend starting with the TRACK3R. Instructions for building this robot are included in the LEGO robotics Mindstorms kit. Also, the programming is already included on the EV3 programmable brick. This simple robot should take around an hour to build. Building it will familiarize makers with the kit and components, and introduce them to the basic controls. 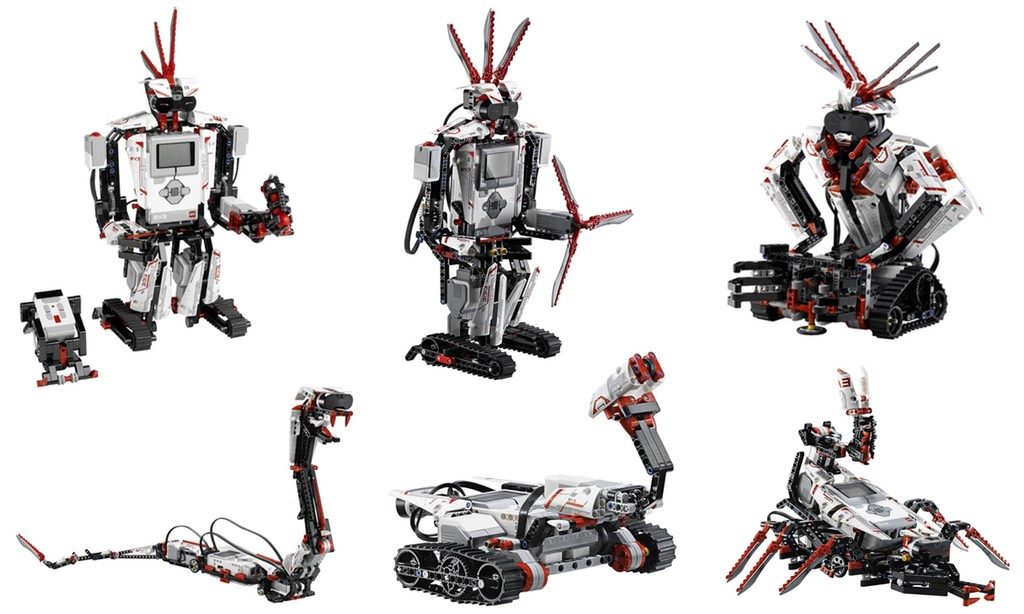 Next, choose a different robot to build. Select one of the robots with instructions in the kit. Choices include SPIK3R, a scorpion-like robot, and R3PTAR, who looks like a snake. There’s also GRIPP3R and EV3RSTORM, the more humanoid robots. Build the robot and then…

The basics are mastered and a new cool robot is built. It’s time to begin programming. Fortunately, LEGO has a fun, simple programming app called LEGO Commander. Downloads for Mac, PC, and tablets are available at the LEGO website.

Installation is simple and even young makers will be able to program their new robots in no time at all. The app includes a simple drag and drop interface. The basic robots have programs already included in the app. Simply connect the robot to a device and install the programming into the robot. This is also a good time to start exploring the Mindstorms LabView programming language. Open up the existing programs, and note how the language functions. It uses a simple and intuitive system of colored tiles and icons to create mechanical functions for your the creations.

Now that the basic are mastered, the possibilities are endless, especially for young imaginative makers. They create and build their own cool robots and then use LEGO’s simple programming language to control their robot. LEGO robotics offers children the opportunity the exercise their imaginations and learn basic programming in a single, yet sophisticated robotics kit.

We love to hear from you! Share your LEGO robotics questions and experiences in the comments below.